Background: Lung cancer is the most common cancer worldwide, both in terms of the incidence and mortality. NDC80 complex comprising of NDC80, NUF2, SPC24, and SPC25 is a heterotetrameric protein complex located in the outer layer of the kinetochore and plays a critical role in mitosis. This study focuses on the effects of NDC80 complex genes on clinical features and prognosis in lung adenocarcinoma (LUAD).

Conclusion: NDC80 complex gene might be an early indicator of diagnosis and prognosis of LUAD. The combined detection of NDC80, NUF2, SPC24 and SPC25 may become a new research direction in LUAD diagnosis and a new target for tumor targeted gene therapy.

With the deterioration of the natural environment, non-smoking lung cancer and lung cancer in women has increased sharply in recent years. The prevalence of LUAD is gradually surpassing that of lung squamous cell carcinoma (LUSC) [5]. Lack of biomarkers of early diagnosis due to the occultation process, about 50% of patients with at the time of LUAD diagnosis has local infiltration and distant metastasis. The 5-year survival rate of clinical-stage 4 patients is less than 1% [3, 5, 6].

Factors responsible for lung cancer include genetic and signaling pathway abnormalities. Hence, it is important to understand the associated genes and their mechanisms in the development of lung cancer [3, 7, 8]. The nuclear division cycle 80 (NDC80) complexes consisting of NDC80, NUF2, SPC24, and SPC25 form a heterotetrameric protein complex located in the outer layer of the kinetochore and link the kinetochore to microtubules during mitosis [9-11]. Abnormal production of any of the NDC80 complex genes can cause chromosomal aberration and instability of the genome a major event in all tumorigenesis [12]. Studies have shown aberrant expression of the NDC80 complex in various tumors, which can be used as a diagnostic marker for certain tumors, and may even be an indicator for evaluating prognosis [13-15]. However, the role of the NDC80 complex in LUAD is not very clear. In this study, we studied the effects of NDC80 complex genes on clinical characteristics and prognosis in LUAD.

A Pearson correlation matrix to understand the correlation among the NDC80 complexes genes was constructed using R version 3.6.1 (https://www.r-project.org/, October 2, 2019). Functional and enrichment analysis using the Database for Annotation, Visualization, and Integrated Discovery (DAVID) v.6.8 (https://david.ncifcrf.gov/tools.jsp, October 2, 2019) [17, 18], including functional analysis of gene ontology (GO) and analysis of the Kyoto Encyclopedia of Genes and Genomes (KEGG) pathway. GO functional analysis included biological process (BP), molecular function (MF), and cellular component (CC). The function of the gene was predicted using the GO function analysis tool Biological Networks Gene Ontology (BiNGO) based on the results of the correlation analysis [19]. Interaction between the members of the NDC80 complex was analyzed by gene function prediction on Gene MANIA (Gene MANIA: http://genemania.org/, October 2, 2019) [20]. The Search Tool for the Retrieval of Interacting Genes/Proteins (STRING: http://string-db.org, October 12, 2019) was used to evaluate the functional and physical relationships of NDC80 complex and correlated genes [21].

Patients were subdivided into low- and high-expression groups according to the median OS. OS was used to evaluate prognosis of LUAD. Correlation among the NDC80 complex genes was identified by Kaplan-Meier estimator with a log-rank test. Values were adjusted for age, sex, smoking history, radiation therapy history, targeted therapy history, neoplasm status, TNM stage and residual tumors in the Cox proportional hazards regression model. The effect of high and low expression of each gene of the NDC80 complex on the prognosis was also evaluated.

A prognostic risk score was based on the adjusted expression levels (TNM stage, neoplasm status, residual tumor, radiation therapy) of NDC80 and SPC25 in LUAD. 1-year, 3-year, and 5-year survival rates were predicted based on clinical factors and genes that were used to construct the Nomogram for OS [24].

Demographic characteristics, clinical features, and relationship to OS in patients with LUAD are presented in Table 1. All clinical data and demographics of were obtained from TCGA.TNM stage; neoplasm status, residual tumor, and radiation therapy were associated with OS (P < 0.001, respectively). Boxplots of NDC80 complex in normal and tumor tissue are presented in Figure 1; Expression of NDC80, NUF2, SPC24, and SPC25 were significantly higher in LUAD than healthy lungs (Figure 2A). Figure 2B shows the level of stratified expression of the NDC80 complex genes in LUAD. 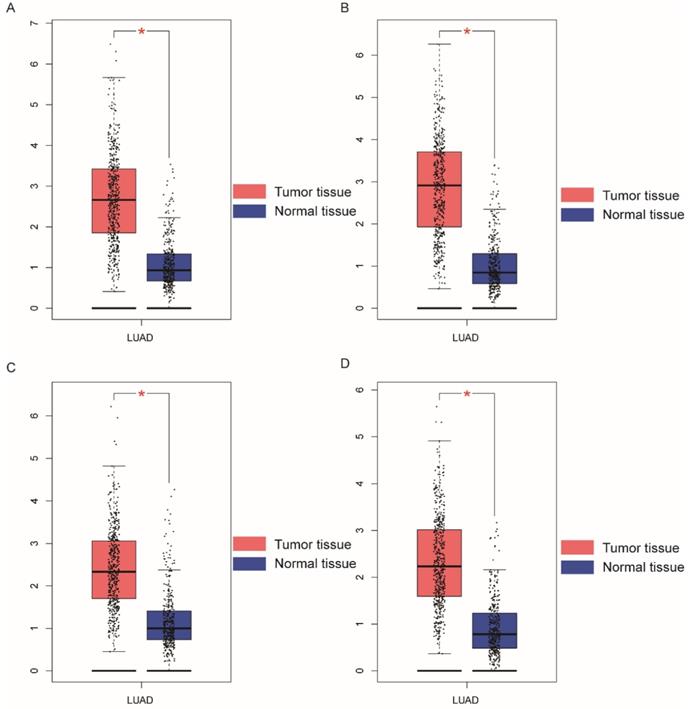 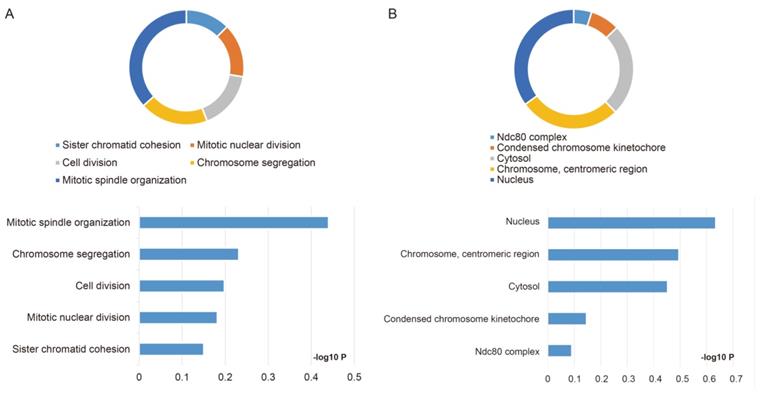 Grouping according to expression levels of the SPC25 and NDC80 gene

NDC80 and SPC25 expression, TNM grade, tumor status, residual tumors, radiotherapy were used to construct a nomogram for risk assessment. Points were assigned to each variable based on the Cox regression coefficients. Add these points and draw a vertical line between the total point axis and the survival probability axes at 1 year, 3 years and 5 years to estimate the probability of survival (Figure 12). 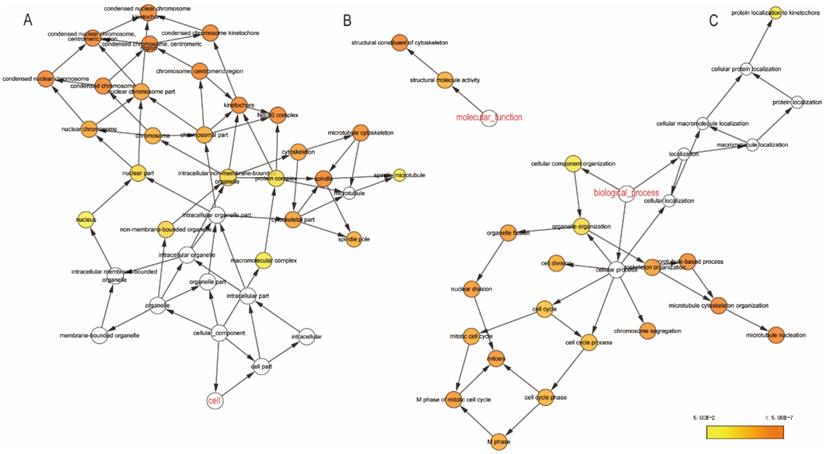 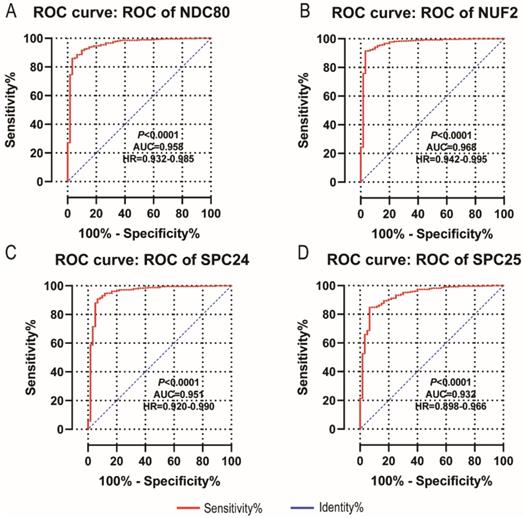 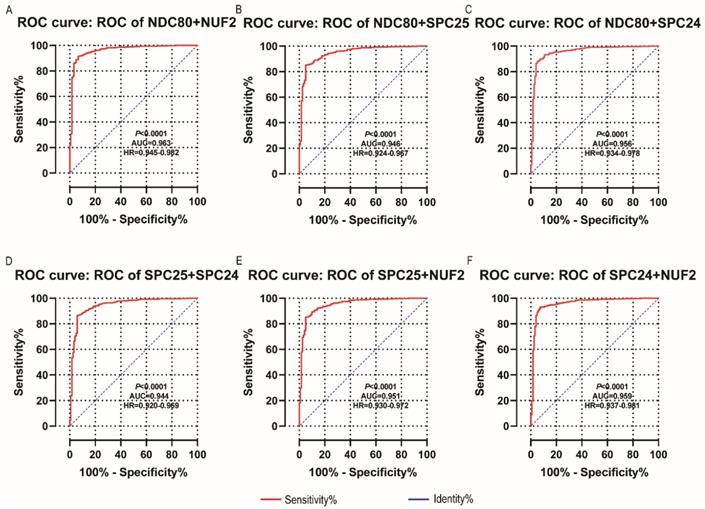 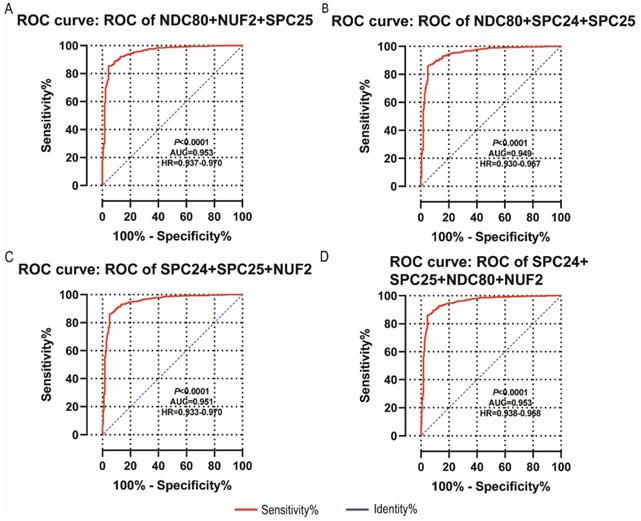 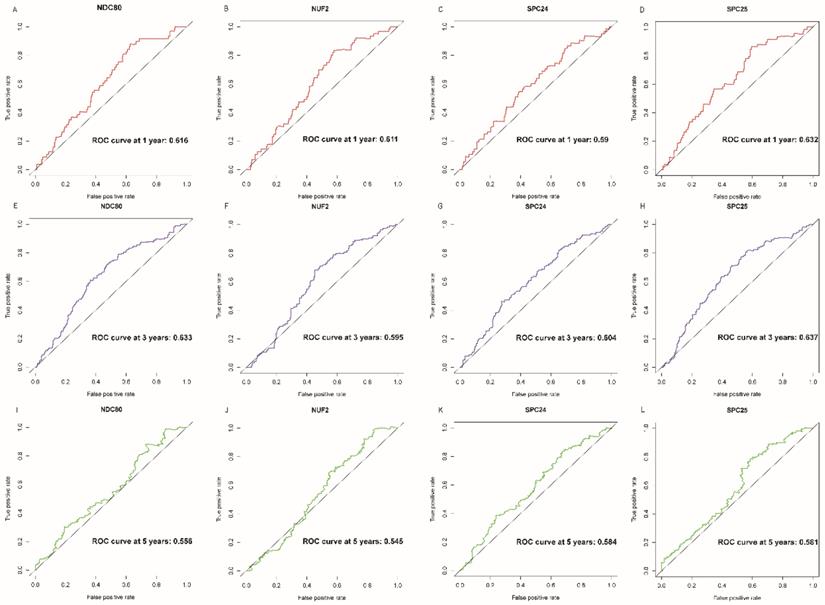 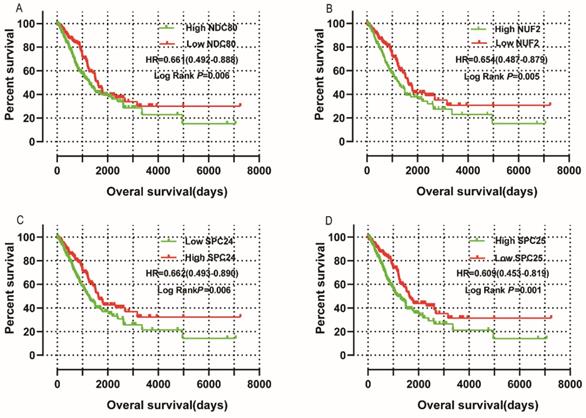 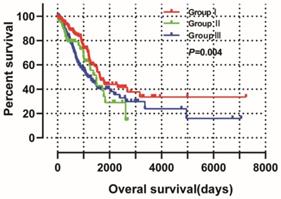 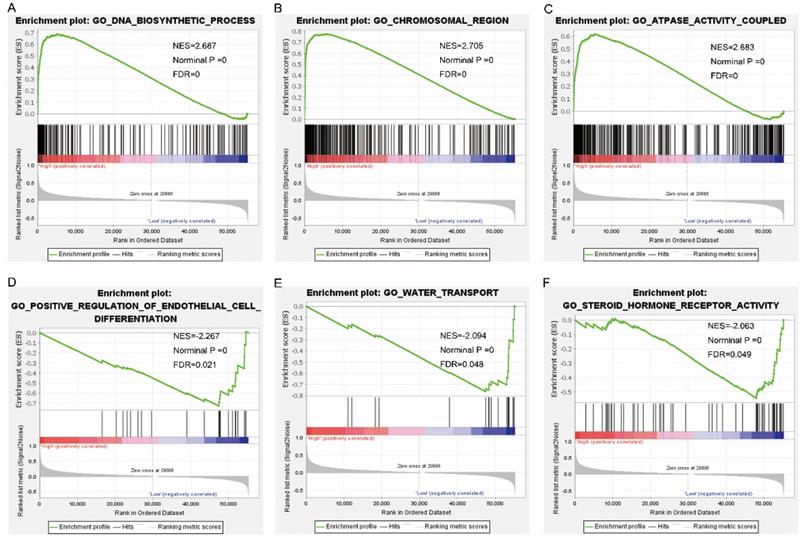 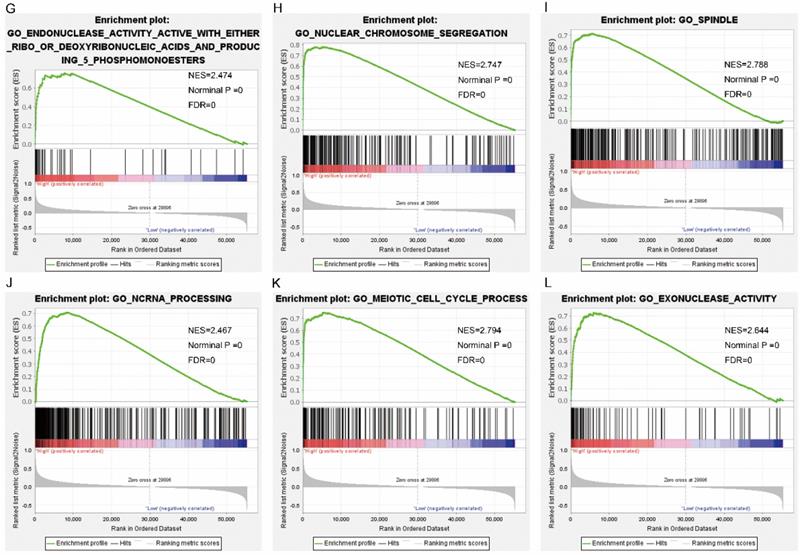 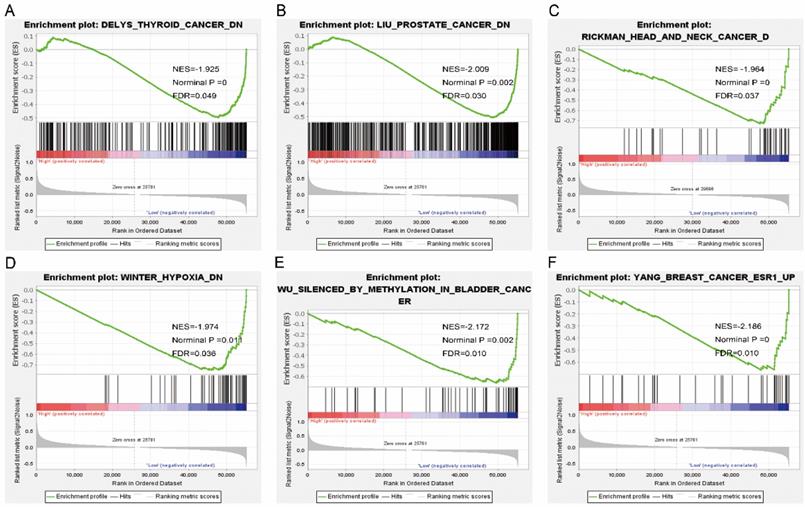 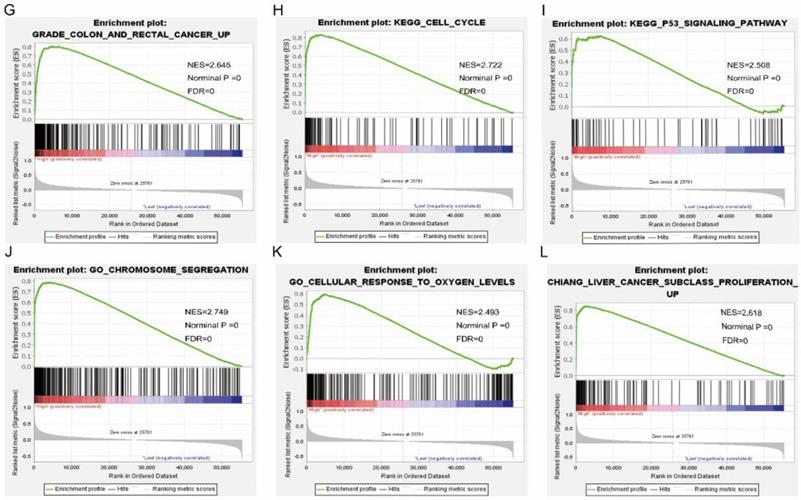 The role of NDC80 in cancer is well described. Studies have shown that overexpression of NDC80 can result in permanent hyper activation of mitotic control points and induce tumor formation in vivo [36]. By constructing a high-expression NDC80 mouse model and a non-transgenic murine model, Sotillo R et al. reported that over-expression of NDC80 resulted in higher incidences of liver and lung cancer in mice [37]. This was observed in conjunction with elevated expression of Mad2 [37]. Expression of NDC80 mRNA was also reported to be elevated in both gastric and pancreatic cancers [38, 39]. In osteosarcoma, 84.6% of tumor tissues expressed NDC80 mRNA higher than adjacent normal tissues, and expression level correlated with tumor TNM stage and distant metastases, and NDC80 was an independent prognostic indicator [40]. Expression of NDC80 protein in colon cancer cell lines such as HCT8, SW480, CACO2 and HCT116 was superior to that of a normal intestinal epithelial cell line NCM460 [41]. Cell proliferation was significantly accelerated after staining with the NDC80 gene and shows greater transfer capacity [41]. Previous studies have shown that in vitro culturing of hepG2 hepatoma cell lines resulted in decreased NUF2 expression and cell cycle proteins such as, cyclins B1, Cdc25A and Cdc2, but expression of apoptosis-associated proteins (such as Bad and Bax) was significantly increased, thus inducing cells, inhibiting cell cycle and apoptosis, thereby inhibiting cell growth. HepG2 cells with NUF2 gene knockout were injected into the right abdomen of nude mice and the growth rate was significantly lower than non-transgenic knockout cells, indicating that the NUF2 plays an important role in the growth of liver cancer cells in vitro and in vivo [42, 43]. Juan Zhou et al. reported that SPC24 regulates PI3K/AKT kinase pathway and the knockdown of SPC24 can lead to attenuated cell growth, increased cell apoptosis and cell cycle progression [44]. In LUAD, previous study also found SPC24 is strongly expressed in LUAD and its level of expression is related to the survival rate for lung cancer patients. High expression of SPC24 can negatively regulate E-cadherin, and positively regulate N-cadherin and vimentin and participation in epithelial-mesenchymal transition during lung cancer, affecting tumor growth and invasion [44]. In addition, high expression of SPC24 is also found in thyroid cancer, liver cancer, and osteosarcoma [44-46]. However, the role SPC25 in cancer remains understudied. SPC25 is highly expressed in the basal part of breast cancer with more stem cell-like cells, and SPC25 expression is related to disease-free survival. Expression of SPC25 is higher in CpG Island methylation phenotype positive kidney carcinoma (CIMP) than in CIMP negative kidney cancer cells, but the significance remains uncertain [47].

This study had some limitations. First, the sampling size was small. For better accuracy and validation of the data a larger sample size is needed. Second, more comprehensive clinical information on race, living environment, and family history is needed. Third, the current study is a single cohort study which could have led to bias in the analysis. The findings in this study should be replicated and confirmed in other populations. Finally, the underlying molecular mechanism of NDC80 complex in the process of tumorigenesis was not studied. Hence, for better understanding, NDC80 complex and its signal transduction pathway need to be further studied. Although there are a large number of studies on the role of the NDC80 complex genes in cancer, this study has for the first time developed a risk assessment score by including clinical factors and expression of the NDC80 complex with diagnostic and prognostic value in LUAD.