Background: The accelerated reproliferation of esophageal squamous cell carcinoma (ESCC) after radiation contributes to conventional fraction radiotherapy (CFRT) failure. Late course accelerated hyperfractionated radiotherapy (LCAHFRT) can improve the long-term survival of esophageal cancer patients in China but is associated with a high rate of side effects due to the large exposure field of two-dimensional treatment and drug toxicity. Intensity-modulated radiotherapy (IMRT) can increase the tumor dose while decreasing the normal tissue dose. Therefore, we compared the outcomes and side effects of LCAHFIMRT plus concurrent chemotherapy (CT) and CFIMRT plus CT for ESCC.

Methods and Materials: Between 2013 and 2016, 114 eligible patients with ESCC were recruited and randomly assigned to receive LCAHFIMRT+CT (58 patients) or CFIMRT+CT (56 patients) by a linear accelerator (6-MV X-ray) under image guidance. Two cycles of CT with cisplatin and docetaxel were also administered.

Esophageal cancer (EC) is the 7th most common malignancy and the 6th most common cause of cancer death around the world; approximately 572,000 new cases of EC and 509,000 deaths related to EC occurred in 2018 [1]. Among these cases, approximately 80% of the cases of morbidity and mortality occurred in developing countries [2]. In China, the incidence of EC and deaths related to EC account for 50% of all cases globally around the world and 60% of those in developing countries. EC is still the main burden of disease for local residents, especially in the rural areas of the Midwest which are considered high-incidence areas [3, 4].

Although surgery is an effective treatment for EC, most patients tend to be at an advanced stage at the time of diagnosis [5,6]. Thus, radiotherapy (RT) plays a well-defined role in the management of patients with inoperable locally advanced EC [7]. However, experimental studies have shown that the accelerated re-proliferation of tumor cells after radiation is an important reason for failed conventional fraction radiotherapy (CFRT) [8]. Several clinical trials verified that nonconventional fraction RT, especially late course accelerated hyperfractionated radiotherapy (LCAHFRT), can improve the long-term survival of patients with esophageal cancer [9-11]. In 1999, Shi XH et al. reported that compared with CFRT, LCAHFRT improved the 5-year survival rate from 26% to 33% [10]. Zhao KL et al. used LCAHFRT with concurrent chemotherapy (CT) for patients with ESCC and found that this method was comparable to LCAFRT alone; patients who received concurrent LCAFRT and CT exhibited better survival with a 5-year survival rate of 40% and a median survival time of 30.8 months [11]. However, a large number of side effects were reported in these studies due to the large exposure field of two-dimensional treatment and drug toxicity.

The Radiation Therapy Oncology Group (RTOG) phase Ⅲ intergroup trials RTOG 85-01 and 94-05 showed that RT plus concurrent 5-fluorouracil (5-FU) and cisplatin (DF) is the standard CT regimen for patients with EC [17, 18]. Novel CT drugs applied in clinical application have significantly improved the curative effects of CT while alleviating the side effects. Docetaxel is a clinically well-established anti-mitotic CT medication that affects dynamic microtubule assembly and disassembly [19]. Yang HX et al. (2015) reported that the use of neoadjuvant CT agents docetaxel and nedaplatin may provide excellent outcomes for down-staging disease and R0 resection and the patients with EC in their study had a 2-year survival rate of 71.1% [20].

However, virtually all seminal clinical trials for LCAFRT in EC have utilized two-dimensional radiotherapy (2DRT) or three-dimensional conformal radiotherapy (3DCRT) [9-11,21]. There was a lack of supporting data for LCAFRT in EC under IG-IMRT. Therefore, LCAHFRT delivered by image-guided intensity-modulated techniques in combination with new CT regimens with cisplatin and docetaxel should be further investigated to assess the efficacy and side effects of this method in ESCC patients.

Radiation for IMRT was carried out by a linear accelerator (6-MV X-ray). Each patient underwent CT imaging with an intravenous contrast agent for treatment planning. Then, the images were transferred to a radiotherapy planning system (Eclipse). The target area was delineated by two associate chief physicians. The gross tumor volume was defined as the macroscopic primary tumor (GTV) and regional lymph node metastases (GTVnd) based on the endoscopy, endoscopic ultrasonography, barium esophagography and chest CT scans. The clinical target volume (CTV) was defined as the GTV/GTVnd plus a 0.5-1 cm radical margin and 3-4 cm cranio-caudal margin. The supraclavicular nodes were included as upper esophageal lesions, and the celiac nodes were included as distal esophageal lesions. The planning target volume (PTV) consisted of the CTV plus a 0.5-1 cm margin for daily setup error and organ motion.

All patients received two cycles of concurrent CT with a regimen consisting of cisplatin and docetaxel; cisplatin was provided at 25 mg/m2/day i.v. from days 1-3, and docetaxel was provided at 60 mg/m2/day i.v. on day 1. The first cycle began on the first day of RT, while the second cycle of CT began on the twenty-eighth day of RT if the patients did not exhibit side effects that exceeded grade 2 or if the investigator decided that the patient should not receive the second cycle of CT.

In the LCAHFIMRT+CT group, the highest radiation dose to the GTV or GTVnd was 62 Gy, and the minimum dose was 52 Gy; the corresponding values were 61.6 Gy and 55 Gy in the CFIMRT+CT group. All patients in both groups completed two cycles of CT. The patients were followed up every three months for two years, then every six months for two years, and then every year. The last follow-up occurred in June 2019. The follow-up periods were 36-58 (median 45) months, and the follow-up rate was 100%.

Side effects of treatment

Comparison of treatment side effects 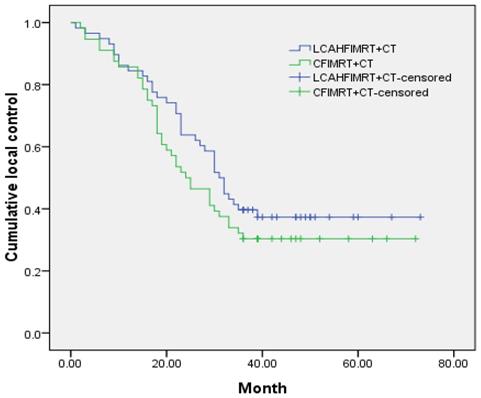 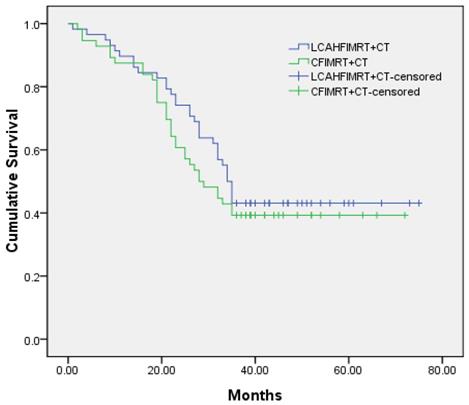 Comparison of the causes of death, n (%)

Radiation plays a crucial role in the treatment of EC; however, the 5-year survival rate of EC patients treated with RT alone is 23.31±10.21% due to the high rates of failed local recurrence and uncontrolled disease [7]. The accelerated reproliferation of tumor cells after RT is another important reason for RT failure [8]. In a 2DRT era, Zhao KL et al. reported that LCAHFRT together with CT using the DF regimen led to a median survival of 30.8 months and 1-, 3-, and 5-year survival rates of 67%, 44%, and 40%, respectively [11]. Wang JH et al. showed that the 1-, 2-, and 3-year local control rates and survival rates of 3-dimensional late course accelerated hyperfractionated conformal radiotherapy were 81.3%, 62.5%, and 50% and 79.2%, 56.3%, and 43.8%, respectively[21]. Thus, high-dose radiation did not lead to improved curative effects for EC patients. In the present study, all patients received image-guided conformal IMRT, which utilizes computer-controlled linear accelerators to deliver precise radiation doses to the GTV and GTVnd as well as CT-based image guidance and repositioning prior to RT. Li CC et al. [23] showed that concurrent chemoradiation (CCRT) coupled with IGRT is associated with better overall survival compared with CCRT without IGRT in patients with nonoperable localized ESCC.

The phase III RTOG intergroup trials 85-01 and 94-05 established the value of CCRT as the standard therapy for patients with EC patients [17,18], and the DF regimen was recommended as the first-line CT for EC [24]. However, the DF regimen has limited efficacy and application due to the mucosal response to 5-FU. Compared to the DF regimen, docetaxel combined with cisplatin had synergistic effects at lower concentrations and promoted apoptosis but did not increase the side effects of CT [25]. Sasaki K et al. used neoadjuvant chemoradiotherapy with docetaxel/cisplatin/5-FU (DCF) in 30 patients with ESCC. The 3-year overall survival rate was 62.2%, and the 3-year pathologic complete response (pCR) rate was 84% [26]. Combination chemotherapy using DCF has shown promising efficacy for patients with ESCC in adjuvant and salvage settings [27, 28]. In our study, we used LCAHFIMRT plus CT in view of the high dose of radiotherapy for patients and a two-drug regimen with docetaxel and cisplatin (DC) for concurrent chemotherapy. The results showed that the CR rate was 79.3% in the LCAHFIMRT+CT group, which was higher than that in the CFIMRT+CT group (61.8%). Compared to CFIMRT+CT, LCAHFIMRT+CT prolonged the median local control time and the median survival time of patients. The 1-, 2-, and 3-year local control rates and survival rates were 86.2%, 63.8%, and 41.4% and 87.9%, 74.1%, and 44.8%, respectively, in the LCAHFIMRT+CT group, which were higher than those in the CFIMRT+CT group as well as those reported in previous studies. The acute and late side effects that occurred were mainly grade I and II in both the LCAHFIMRT+CT group and the CFIMRT+CT group, possibly because IMRT reduces the radiation dose to the surrounding normal tissue and because not all patients received adjuvant CT after CCRT in our study. However, we observed 6 cases and 5 cases of fatal serious side effects in the esophagus and lung in the LCAHFIMRT+CT group and the CFIMRT+CT group, respectively. The main causes of death were local recurrence or uncontrolled disease in both groups.

Overall, our results revealed that image-guided LCAHFIMRT combined with new CT regimens with cisplatin and docetaxel, which had a better short-term efficacy and a slightly higher local control rates and long-term survival rates than CFIMRT for ESCC. The side effects in the LCAHFIMRT+CT group were similar to that in the CFIMRT group owing to use the IG-IMRT and new chemotherapy regimens. However, improving the local control rate and reducing the long-term side effects of CCRT are still difficult problems to solve in clinical practice.

5. Fransen LFC, Luyer MDP. Effects of improving outcomes after esophagectomy on the short- and long-term: a review of literature. Journal of thoracic disease. 2019;11:S845-50