Gefitinib is a potent inhibitor of EGFR and represents the front-line treatment for non-small cell lung cancer (NSCLC) therapeutics. However, NSCLC patients are prone to develop acquired resistance through as yet, undefined mechanisms of resistance. Here, we investigated the role of COX-2 during gefitinib resistance in NSCLC cells and revealed its underlying mechanism(s) of action. We report the upregulation of COX-2 in gefitinib-resistant NSCLC tissues and cells, which is associated with poor prognosis. In vitro assays in NSCLC cells (PC9/GR) showed that COX-2 facilitates gefitinib resistance in NSCLC cells through its effects on P-gp, MRP1, and BCRP, and cancer cell migration and invasion. In vivo, COX-2 silencing could repress tumor growth. We found that the overexpression of COX-2 enhances the transcription of MMP-2, MMP-7, and MMP-9 which mediates PI3K-AKT activation. In summary, we demonstrate that COX-2 mediates the gefitinib resistance of NSCLC cells through its interaction with EGFR and the PI3K-AKT axis. This highlights COX-2 as a novel molecular target for NSCLC.

Non-small cell lung cancer (NSCLC) is a globally important cancer which remains a major cause of cancer related death despite advances in cancer treatment [1, 2]. In recent years, molecularly-targeted therapy has shown great promises in molecular subtypes of lung cancer patients. As an exemplar, EGFR-tyrosine kinase inhibitors (TKI) can prolong progression-free survival for EGFR-mutated lung cancer patients [3, 4]. However, the resistance to EGFR-TKI invariably emerged with the treatment [5]. Studying the mechanisms of resistance to EGFR-TKI has thus become a research focus in this field. Recent studies showed that EGFR-TKI resistance may be associated with EGFR T790M mutations [6-8], the activation of bypass pathways [9-11], abnormal downstream pathways [12, 13], impairment for EGFR-TKI mediated apoptosis [14,15], histological transformation [16], drug transport [17], and etc. Other resistance mechanisms remain to be found.

Here, we show that COX-2 is overexpressed in NSCLC cells that show resistance to gefitinib-therapy. We further demonstrate that COX-2 mediates gefitinib resistance through its interactions with EGFR that ultimately activate PI3K-AKT signaling. These data identify COX-2 as a novel therapeutic target to overcome NSCLC drug resistance.

The study was approved by our local ethics committee at the Shanghai Pulmonary Hospital, Tongji University School of Medicine. Our study included 32 patients with NSCLC who received gefitinib treatment and developed acquired resistance eventually. NSCLC was diagnosed through pathological assessments. Clinical and demographic data were collected (Table 1). Informed consent was provided by all participants. Enrolled patients provided written informed consent.

The human lung cancer cell lines H1299, H460, SK-MES-1, A549 cells and normal human bronchial epithelial cells were obtained from the Chinese Academy of Sciences). PC9 lung adenocarcinoma cells were from Dr. Takayama (Kyushu University). Gefitinib-resistant PC9/G cells were produced as previously described [29]. Briefly, PC9 cells were treated for 24 h with 2.5 μg/ml MNNG followed by treatment with media containing 0.2 μmol/L gefitinib for 7 d. Cells were then grown under normal culture conditions for 14 d. When a substantial number of viable cells were identified, cells were seeded into 96-well plates to obtain single clones from 21 d of culture in the presence of 0.3-0.5 μmol/L gefitinib. Cells were then maintained in 0.05 μmol/L gefitinib under standard culture conditions.

Cells were treated with EGF (ab9697; Abcam) or (ab119139; Abcam). COX-2 was silenced using shRNA approaches (Gene Pharma Co). FLAG-COX2, HA‐EGFR, and the pmyr-AKT were transfected into cells and lentiviruses were isolated. For silencing experiments, the indicated cell lines were infected and PI3K kinase assays were performed as previously described [30].

RNA was TRIzol extracted and cDNA was synthesized. Gene expression was quantified via RT-qPCR and relative gene expression was assessed using the 2-ΔΔCt method and normalized to GAPDH. Primers used for qRT-PCR are shown in Table 2.

Sequence of Primers for qRT-PCR

For Transwell assays, cells were seeded onto BioCoat Matrigel wells and cell migration and invasiveness were assessed. Migrating/invading cells were quantitated from six microscopic fields. Experiments were performed on 3 or more independent occasions.

All animal assessments were approved by our internal review board. Male nude mice (n=10, aged 4 weeks, Academy of Military Medical Science, Beijing). Cells in PBS were subcutaneously injected into the flanks to establish tumor models (5×106 cells).

Data were analyzed using SPSS 20.0. Data are the mean ± SD (n=3) compared via a two-tailed Student's t-test or one-way Anova for multiple group comparisons. A Wilcoxon signed rank test was used for the analysis of variance. Mann Whitney U tests were performed as required. Survival analysis was performed using KM analysis. Patient survival was compared via a log-ranked test. Significant values had P-values <0.05.

We found that in LUAD cells (PC9), COX-2 was upregulated in a concentration dependent manner by gefitinib (Figure 2A). We exogenously overexpressed or silenced COX-2 expression to assess its effects on PC9/GR cells (Figure 2B, 2C). CCK-8 assays showed that the IC50 of gefitinib increased in PC9 cells exogenously expressing COX-2 (Figure 2D), but decreased in COX-2 silenced cells (Figure 2D). Transwell assays showed that the overexpression of COX-2 led to higher levels of cell migration and invasion, whilst the opposite phenotype was observed for COX-2 silenced cells (Figure 2E). RT-qPCR analysis showed that COX-2 overexpression enhanced the levels of P-gp, MRP1, and BCRP, which were inhibited following COX-2 silencing (Figure 2F). In Xenograft mouse models, COX-2 silencing led to lower tumor volumes and weight in those injected with PC9/GR cells (Figure 2G-H). The culmination of these data shows that COX-2 enhances gefitinib resistance, and promotes the metastatic phenotypes of NSCLC cells.

To investigate the mechanism(s) through which COX-2 mediates gefitinib resistance, we first examined its role in EMT, a key pathway for cancer metastasis. No notable effects of COX-2 on EMT were observed as vimentin, and N-cadherin expression were largely unchanged between COX-2 overexpressing or silenced lines (Figure 3A), suggesting that COX-2 mediated metastasis and drug resistance in NSCLC cells is EMT independent. Tumor invasion occurs due to the increased proteolytic activity of MMPs that degenerate neighboring stroma, enabling the spread of tumor cells. MMP-2, -7, and -9 expressions were found to decrease in COX-2 silenced cells (Figure 3B). AKT was also inactivated in PC9/ GR cells silenced for COX-2 whilst JNK2, STAT3 and p38 were largely unaffected (Figure 3C). In COX-2 silencedPC9/GR cells, the exogenous expression of AKT significantly increased the expression of MMP-2, -7, and -9 at the mRNA level (Figure 3D). Enhanced PI3K activity was also observed whilst PTEN expression was largely unaffected (Figure 3E, F). The overexpression of AKT led a higher gefitinib IC50 values (Figure 3G). In addition, the migration and invasiveness of NSCLC cells increased following AKT overexpression (Figure 3H). These data highlight the role of PI3K‐AKT signaling in COX-2 mediated gefitinib resistance in NSCLC cells. 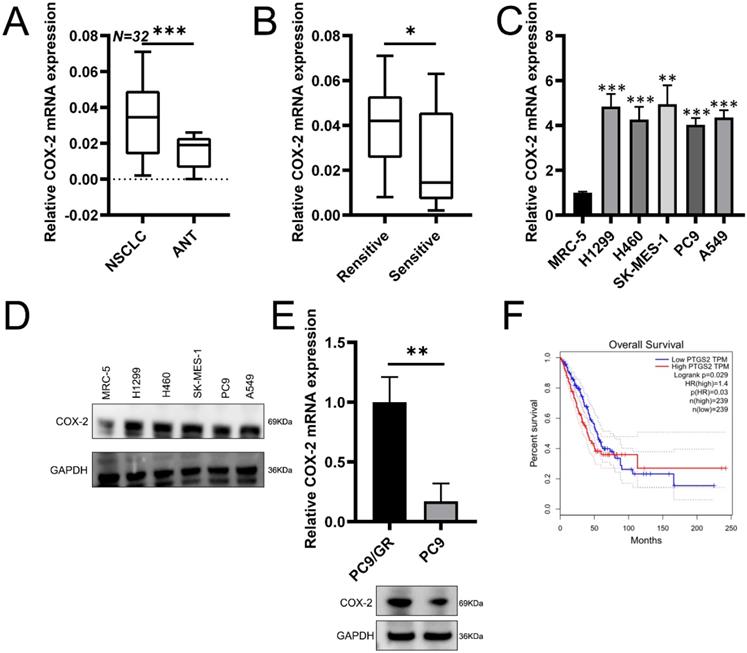 PI3K/AKT signaling activation in response to RTK stimulation. To investigate the ability of COX-2 to activate RTKs in NSCLC cell lines, cells were stimulated with HGF and EGF. As shown in Figure 4A-B, COX-2 silencing prevented EGF stimulated AKT activity in PC9/GR silenced cells vs control shNT cells. In contrast, HGF was unaffected by COX-2 silencing. To investigate a potential interaction between COX-2 and EGFR, FLAG-tagged COX-2 and HA-EGFR were over expressed by transfection in PC9 cells and examined their interaction through co-immunoprecipitation assays. We observed a robust COX-2-EGFR interaction suggestive of its role in COX-2 mediated PI3K signaling (Figure 4C). In addition, upon COX-2 silencing, the phosphorylation of TYR992, TYR1045, and TYR1068 in EGFR decreased in PC9/GR cells (Figure 4D). The culmination of these data highlights COX-2 as a potent oncogene that enhances the targeted resistance of NSCLC cells through its interaction with EGFR, and subsequent activation of the EGFR/PI3K/AKT axis.

Surgical intervention with concomitant chemotherapy remains the front-line treatment for the majority of human cancers [31]. The aim of chemotherapy is to eliminate tumor cells following surgical excision of the tumor and to prevent relapse [32]. Gefitinib is an EGFR-TKIs that can treat NSCLC patients harboring EGFR mutations [33]. Gefitinib is typically administered to patients harboring exon 19 deletions or L858R point mutations [34] and displays high levels of antitumor efficacy [35]. In the present study, we found that the exogenous expression of COX-2 in NSCLC cells/tissue enhances their resistance to gefitinib therapy. 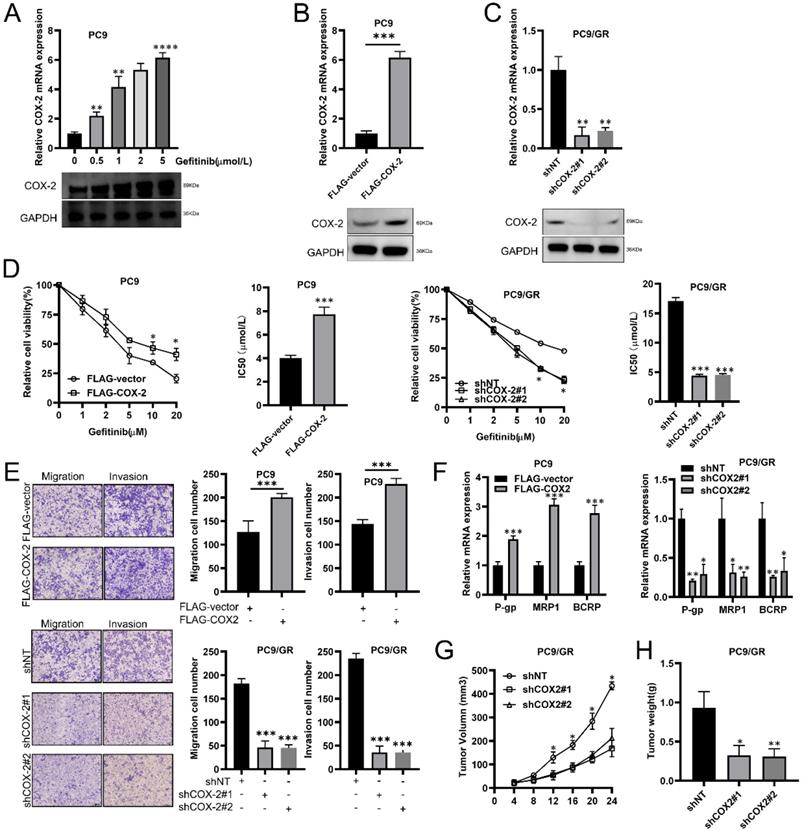 COX-2 expression increases in NSCLC cells with gefitinib-induced resistance. The higher levels of COX-2 promote metastatic phenotypes in the tumor cells and promote gefitinib resistance, inferring its role as an oncogene and a key mediator of therapeutic resistance. Resistance to gefitinib through various molecular mechanisms is a major barrier to effective targeted therapy.

To investigate the oncogenic effects of COX-2, we assessed its ability to enhance EMT, a key predictor of cancer metastasis [36-39]. Following COX-2 silencing in NSCLC cells, no changes in the expression of known EMT genes were observed. Next, we investigated the effects of COX-2 of an array of known pro-oncogenic signaling pathways. We observed robust AKT activation in COX-2 overexpressing cells and a loss of MMP expression and PI3K signaling upon COX-2 silencing confirming a role for MMPs and AKT in NSCLC metastasis occurrence and development [40-43]. We further demonstrated the ability of COX-2 to bind to the EGFR which, in turn, activated EGFR and enhanced PI3K signaling. No such effects were observed for HGF-HGFR signaling in these cells. This revealed new mechanistic insight into the mechanisms through which COX-2 enhances gefitinib resistance, namely through activation of the EGFR/PI3K/AKT axis. 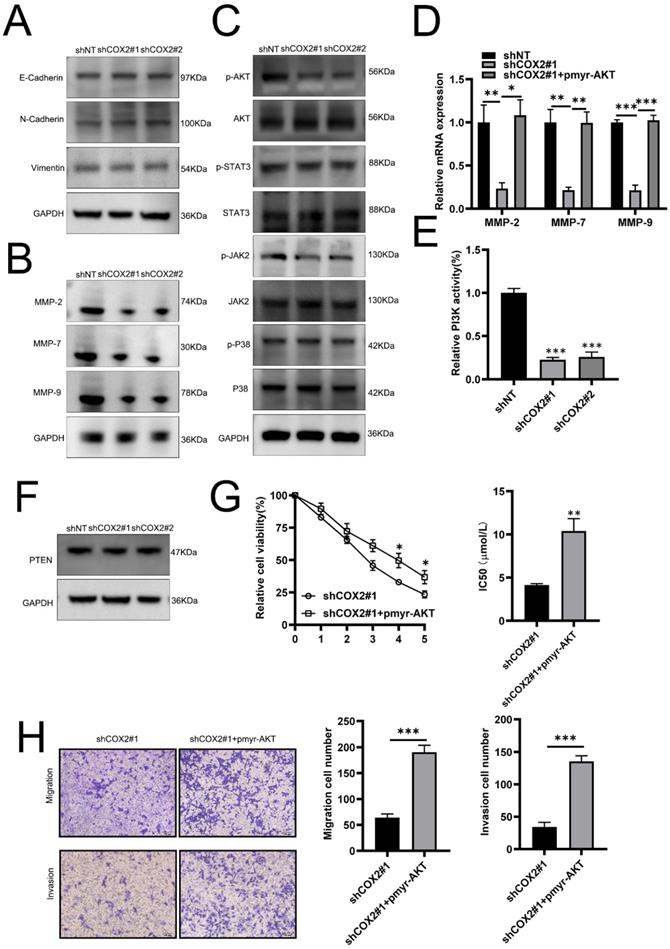 COX-2-EGFR binding leads to PI3K/AKT activation. (A-B) Cells were treated with EGF or HGF (B) for the indicated time points and WB for the indicated proteins was performed. (C) Co-Ip assays of PC9 cells transfected with HA-EGFR, FLAG-COX-2 or empty vector controls. (D) Cells were stimulated with EGF exposure for 0 or 15 min and WB analysis was performed as described. 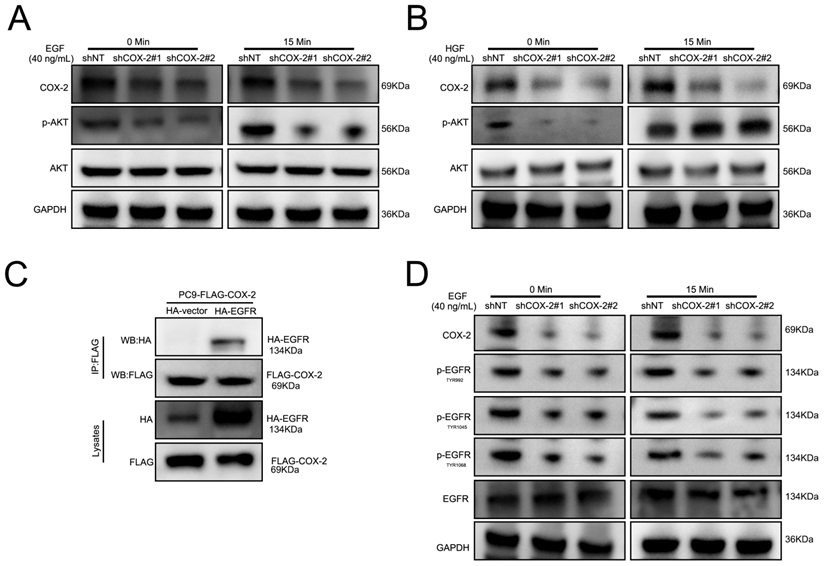 Most solid tumors display enhanced levels of EGFR expression [44-46]. For NSCLC, the overexpression of EGFR strongly correlates with the clinical histopathological characteristics of patients. The overexpression of EGFR leads to aggressive tumor invasion and as such, EGFR inhibitors can effectively alleviate the malignant characteristics of many tumor cells [47]. For NSCLC, emerging preclinical evidence supports the effectiveness of EGFR inhibition as a therapeutic intervention and treatment [48]. Our data highlights that compounds targeting the COX-2-EGFR interaction have potential as future NSCLC therapeutics. The mechanism(s) by which COX-2 regulates PI3K-AKT signaling through its interaction with EGFR now require assessment. We speculate that COX-2 promotes PI3K‐AKT activity through the following mechanisms: 1) COX-2 binds to EGFR to prevent its lysosomal degradation, thus enhancing receptor stability; 2) COX-2 promotes the formation of EGFR dimers to enhance signaling capacity; 3) COX-2 inhibits EGFR endocytosis and the subsequent trafficking of the receptor to the lysosomes for degradation. In future studies, we will explore the mechanisms by which COX-2 enhances PI3K‐AKT signaling mediated through EGFR binding.

In summary, we report, for the first time, that COX-2 mediates the gefitinib-resistant of NSCLC cells. Mechanistically, COX-2 was identified as a novel EGFR interacting partner and enhanced PI3K/AKT signaling through this binding. Taken together, these data highlight the interaction between COX-2 and EGFR and the PI3K/AKT axis as a novel therapeutic strategy to overcome gefitinib resistance in NSCLC cells.

46. Herbst RS, Langer CJ. Epidermal growth factor receptors as a target for cancer treatment: the emerging role of IMC-C225 in the treatment of lung and head and neck cancers. Semin Oncol. 2002;29:27-36