Methods: Three original microarray datasets (GSE41328, GSE22598, and GSE23878) from NCBI-GEO were used to analyze differentially expressed genes (DEGs) in CRC. Online database analyses through Oncomine and GEIPA were performed to evaluate SLC4A4 expression and explore the prognostic merit of SLC4A4 expression, which was further confirmed by analyses from QPCR based cDNA array and IHC based tissue microarray (TMA). STRING website was used to explore the interaction between SLC4A4 with other DEGs based on the protein-protein interaction (PPI) networks.

Conclusion: The mRNA and protein levels of SLC4A4 were decreased in CRC tissues, and low expression of SLC4A4 significantly correlated with shorter survival of CRC patients and poorer progression of patients with breast cancer, lung cancer, gastric cancer and ovarian cancer, suggesting potential role of SLC4A4 on tumor suppression and prognostic prediction in multiple malignancies including CRC.

Colorectal cancer (CRC) is the third most common malignancy and the fourth leading cause of cancer-related death in the world, resulting in more than half a million deaths every year[1-3]. In the United States, in 2017, CRC was ranked third in frequency of incidence (135,430 new cases of CRC were diagnosed, with 40.7 cases per 100,000 individuals); further, CRC is more common in men than in women[4]. Although decreased tobacco consumption and red meat intake and increased aspirin use have contributed disproportionately to declining CRC morbidity and mortality, this disease is still highly lethal (14.8 deaths per 100,000 individuals)[5,6]. Because of the high morbidity and mortality associated with CRC, the identification of more valuable and convenient biomarkers for early diagnosis and survival prediction is critically important and in high demand.

Recent studies in the field of molecular pathology have introduced thousands of tumor biomarkers associated with the progression or prognosis of different types of cancers. Many of these biomarkers have been evaluated for patient survival in CRC, such as TP53, KRAS and CDKN1A[7-9]. Gene chip analysis is a gene-detection technique that has been in use for >10 years; this technique can detect all the genes within the same sample time-point expression information and is particularly suitable for screening differentially expressed genes[10]. The Gene Expression Omnibus (GEOs) is a repository of gene expression data, wherein a large number of microarray data has been deposited and stored[11]. A considerable amount of microarray data has been accumulated on CRC[12], and hundreds of differentially expressed genes (DEGs) have been identified. The innovative combination of integrated bioinformatics methods with expression profiling techniques may allow the identification of reliable biomarkers for CRC.

In this study, we downloaded three original microarray datasets (GSE41328[13], GSE22598[14] and GSE23878[15]) from the NCBI-Gene Expression Omnibus database (NCBI-GEO) (available online: https://www.ncbi.nlm.nih.gov/geo), from which data of total 62 CRC cases and 51 normal colon mucosa is available. Then, we filtered DEGs in the GEO2R tool using conventional data processing standards. Combination of online database (including Oncomine, GEIPA and Kaplan-meier plotter), Q-PCR based cDNA array and IHC based TMA were further performed to assess the expression of selected DEGs and its correlation with survival patients of CRC, as well as progression (including RFS, Relapse Free Survival; OS, Overall Survival; DMFS, Distant Metastasis Free Survival; PPS, Post Progression Survival) of patients with breast cancer, lung cancer, gastric cancer or ovarian cancer. Finally, using Search Tool for the Retrieval of Interacting Genes (STRING) (available online: http://string-db.org/), the present study further explores the interaction between SLC4A4 with other DEGs based on protein-protein interaction (PPI) networks[16, 17].

GEO2R was employed to detect DEGs between CRC tissues and noncancerous colorectal tissues [11]. Differentially expressed genes (DEGs) were identified using the classical t-test, and statistically significant DEGs were defined with P < 0.01 and [logFC] > 2 as the cutoff criteria. The co‑expressed upregulated and downregulated DEGs in the two gene expression profiles were identified with a Venn Diagram (available online: http://bioinformatics.psb.ugent.be/webtools/Venn/).

The overview of SLC4A4 expression in various tumors specimens and its detailed expression in CRC specimens (24 datasets), as well as in noncancerous normal controls were analyzed by Oncomine platform (Available online: https://www.oncomine.org)[18]. The folds change of SLC4A4 expression in different datasets ware listed in Table 2. Details of standardized normalization techniques and statistical calculations are provided on the Oncomine website.

IHC based TMA and survival analyses

TMA containing CRC (n=90) and paired noncancerous colorectal tissues (n=90) were purchased from Shanghai Outdo Biotech Company (Shanghai, China). All 90 specimens used for microarray were obtained from Taizhou Hospital of Zhejiang Province with reliable information on survival (no censorship prior to 7 years of follow-up), which was approved by the Ethics Committee of Taizhou Hospital of Zhejiang Province, in accordance with the principles of Declaration of Helsinki. The protein expression of SLC4A4 in CRC samples was determined by IHC. Briefly, the section was incubated with antibody against SLC4A4 (1:3000; Cat No. 32777; Signalway Antibody LLC, Maryland, MD, USA) using the standard technique[20]. The stained slide was scanned with Nano Zoomer 2.0 HT slide scanner (Hamamatsu Photonics, Hamamatsu, Japan). The intensity (no staining, 0; weak, 1; moderate, 2; strong, 3) and percentage (1-25% positive, 1; 26%-50% positive, 2; 51%-75% positive, 3; 76%-100% positive, 4) of positively stained cells were analyzed by experienced pathologists blinded to the clinical and pathological data. The expression of SLC4A4 in CRC samples was assessed by IHC score, which was calculated by the following formula: final score= intensity score × percentage score. To further explore the correlation between SLC4A4 protein expression in CRC tissues with overall survival of CRC patients, the expression of SLC4A4 in CRC tissues was divided into two categories: high expression (IHC score: 6-12) and low expression (IHC score: 0-5). The correlation was analyzed by Kaplan-Meier estimates and compared using log-rank test.

Identification of differentially expressed genes in CRC. Draw Venn Diagram (http://bioinformatics.psb.ugent.be/webtools/Venn/) was used to identify DEGs among three cohort profile datasets (GSE22598, GSE23878, and GSE41328). The 28 upregulated genes (A) and 54 downregulated genes (B) in the CRC datasets were showed. The DEGs were identified with the classical t-test, and statistically significant DEGs were defined with P < 0.01 and [logFC] > 2 as the cutoff criteria.

Kaplan-Meier Plotter (www.kmplot.com) is an online database, containing survival information (including OS, RFS, PPS, DMPS, FP or PFS) of patients with breast cancer, lung cancer, gastric cancer or ovarian cancer. The expression of SLC4A4 in malignancies patient samples were divided into two groups by median expression (high vs. low expression), and the correlation between SLC4A4 mRNA expression with survival of patients was analyzed by a Kaplan-Meier survival plot using log rank test.

Integration of the PPI network of SLC4A4

It is believed that the complex interactions between molecules, such as protein-protein interactions (PPI), play a vital role in organismal and cellular biochemistry. Therefore, we further analyzed the interaction between DEGs based on PPI networks[21], and construct a PPI network by integrating the proteins interacted with SLC4A4 using the STRING website[16, 17, 22].

The Pair-samples t-test was performed to compare the gene expression in tumor tissues and adjacent normal tissues in cDNA array and TMA. All statistical tests were performed using SPSS 19.0 (Chicago, IL, USA), P-value of <0.05 was considered statistically significant.

NCBI-GEO is a free database of microarray/gene profiles and next-generation sequencing, from which CRC and normal or adjacent mucosa tissue gene expression profiles of GSE22598, GSE41328, and GSE23878 were obtained. Using P < 0.01 and [logFC] > 2 as the cutoff criteria, after integrated bioinformatics analysis, a total of 82 consistently expressed genes were identified from the three profile datasets, including 28 upregulated genes and 54 downregulated genes in the CRC tissues compared with the normal colon tissues (Fig. 1 and Table 1).

Low mRNA and protein expression of SLC4A4 in CRC 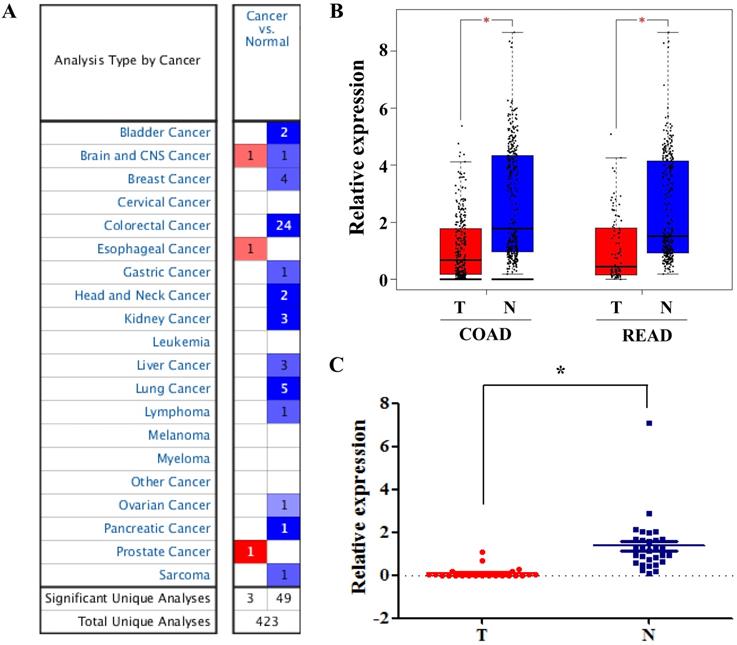 The interaction network among DEGs was plotted using the STRING database for protein interaction based on Protein-Protein Interaction (PPI) network. As shown in Fig. 6, PPI analysis showed known and predicted interactions interaction between SLC4A4 with SLC9A3, SLC26A6, ENSG00000214921, SLC26A4, DCTN1, AHCYL1, CA4, SLC9A3R1, SLC9A1, and CA2, most of which had been reported be oncogenes or tumor suppressors in cancers (including CRC)[23-26]. 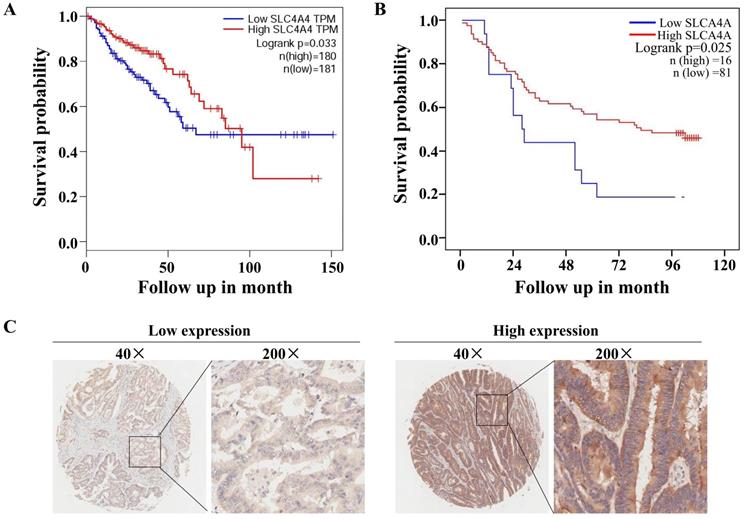 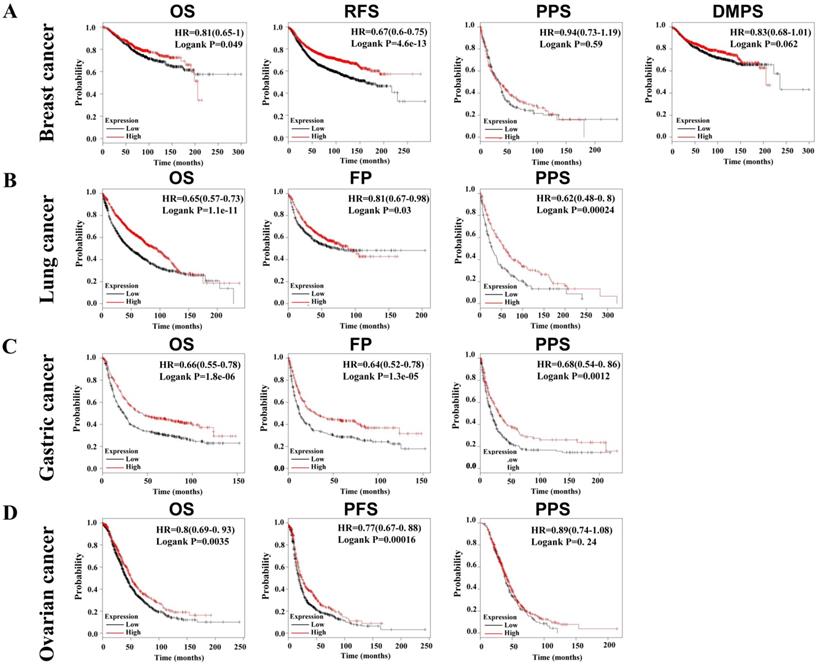 CRC is the third most commonly diagnosed cancer and the third leading cause of cancer-related death in men and women in the United States[6, 27]. Many basic and clinical studies have aimed to reveal the causes and underlying mechanisms of CRC development and progression over the past few decades, and despite significant improvements in the diagnosis, treatment, and survival prediction of CRC, novel biomarkers for prognosis are yet to be identified[28]. To further identify oncogene or tumor suppressor, we analyzed the profile datasets of three cohorts from research groups using bioinformatics methods, revealing 28 upregulated and 54 downregulated genes within the 82 consistently expressed genes. Due to the significantly decrease of SLC4A4 levels in CRC tissues and its role in CRC remained largely unknown in most of tumors including CRC, and therefore were selected as a candidate tumor suppressor gene.

SLC4A4, also known as electrogenic sodium bicarbonate cotransporter isoform 1 (NBCe1), is widely expressed in the secretory and absorptive epithelia and plays an important role in intracellular pH regulation and transepithelial HCO3- transportation[29]. Basolaterally located SLC4A4 is responsible for HCO3- reabsorption in the proximal tubule of the kidneys[30]. Furthermore, SLC4A4 is responsible for basolateral HCO3- uptake prior to luminal secretion in the epithelial lining of the pancreatic duct[31] and the small intestine[32]. Glial NBCe1 operates with a stoichiometry of 1 Na+: 2 HCO3- and can transport Na+ and bicarbonate in both directions across the glial cell membrane[33-35]. Na+-coupled acid-base transporters play essential roles in human biology, and their dysfunction has been linked to cancer, as well as heart and brain disease[36]. The dysregulation of Na+-coupled acid-base SLC transporters in cancer cells has important diagnostic and therapeutic implications[37]. The study of SLC4A4 in colon cancer cells revealed that knockdown of SLC4A4 via shRNA reduced cell proliferation and mortality during external acidosis and spheroid growth, while pHi recovery from acidosis was partially reduced with knockdown of SLC4A4[38], while overexpression of SLC4A4 obviously suppressed the proliferation and metastasis of Caki-1 cells[39], demonstrating that the role of SLC4A4 in cancers including CRC urgent need to be further addressed.

Analysis of SLC4A4 related proteins based on PPI network. Using the STRING database, a total of 11 proteins were filtered into the proteins PPI network. 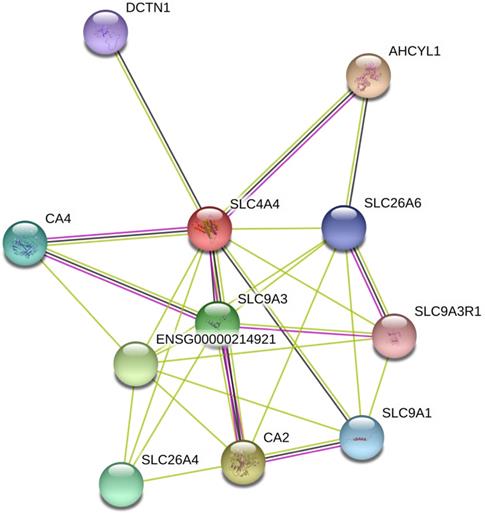 In summary, using profile datasets from multiple cohorts and integrated bioinformatics analysis, we identified the decrease of SLC4A4 in CRC tissues, which was confirmed on both mRNA and protein levels. Moreover, low SLC4A4 expression significantly associated with shorter overall survival of CRC patients. Prediction of interaction between DEGs suggested that by interaction with SLC9A3 and other genes might be one of the mechanisms of SLC4A4 participated during the development of CRC.

This study was supported by the National Natural Science Foundation of China (No. 81774121).

26. Lin CM, Ho HH, Pettit GR. et al. Antimitotic natural products combretastatin A-4 and combretastatin A-2: studies on the mechanism of their inhibition of the binding of colchicine to tubulin. Biochemistry. 1989;28(17):6984-6991