Department of Rhinology, The First Affiliated Hospital of Zhengzhou University, Zhengzhou 450052, China
#These authors contributed equally to this work.

Growing evidence has demonstrated that in tumor progression, circular RNAs (circRNAs) play important roles. However, the roles of circRNAs in nasopharyngeal carcinoma (NPC) have not been fully elucidated. In this study, it was demonstrated that that hsa_circ_0033074 (circSERPINA3) expression was found to be significantly upregulated in NPC tissues and cell lines. CircSERPINA3 inhibition significantly attenuated the invasion and proliferation abilities of NPC cells. The mechanism by which circSERPINA3 interacted with miR-944 was identified and MDM2 was demonstrated to function as a target gene of miR-944. Rescue experiments showed that miR-944 inhibitors or MDM2 overexpression reserved the effects of circSERPINA3 knockdown on NPC progression. Therefore, our study uncovered the circSERPINA3/miR-944/MDM2 axis in NPC, which may be a potential NPC therapeutic target.

Nasopharyngeal carcinoma (NPC) originates from the nasopharynx epithelium, which is a unique head and neck tumor [1, 2]. In recent years, although great advancements have been achieved in fields of radiotherapy, adjuvant chemotherapy, and surgery an, the overall survival rate remains unsatisfied [3, 4]. Therefore, the molecular mechanisms involved in NPC pathogenesis need to be explored.

Unlike linear RNAs, circular RNAs (circRNAs) have a characteristic covalent closed loop structure, with a lack of 5' 3' polarity or a polyadenylation tail [5, 6]. A large number of studies have shown that circRNAs might play significant roles in certain biological processes, such as metastasis, apoptosis and proliferation [7, 8]. As an example, Chen et al found that circPVT1 was found to serve as a prognostic marker and proliferative factor in gastric cancer progression by Chen et al. [9]. circMTO1 was found to regulate the Wnt/β-catenin pathway, which resulted in a decrease colorectal cancer cell invasion and proliferation, in the study by Ge et al. [10]. Chen et al. revealed that circRNA_100782 was able to regulate the proliferation of cells via the IL6-STAT3 axis in pancreatic carcinoma [11]. However, the roles of circSERPINA3 in NPC development remain unclear.

In recent years, accumulating studies have illustrated that miR-944 may perform an important function for the progression of tumors. As an example, miR-944 was found to be able to suppress hepatocellular carcinoma progression through the deactivation of the PI3K/Akt axis and by regulating IGF-1R by Lv et al. [12]. Pan et al. determined that miR-944 acts on the MACC1/Met/AKT axis to suppress gastric cancer metastasis via epithelial-mesenchymal transition inhibition [13]. However, the involvement of miR-944 in NPC progression needs to be further elucidated.

This study confirmed that upregulated hsa_circ_0033074 (circSERPINA3) expression could promote NPC development. Subsequently, we demonstrated that circSERPINA3 executed its tumor oncogenic activity through sponging miR-944 and regulating the expression of MDM2. These results indicate that circSERPINA3 may function as an important target for NPC treatment.

TRIzol reagents (Invitrogen) were used for RNA extraction from tissues and cells. A Prime Script RT Reagent Kit (Takara, Japan) and a One-step miRNA reverse transcription kit (Haigene, China) were used for reverse transcription. RT-qPCR was conducted utilizing the SYBR® Premix ExTaq (Takara) on a VII™7 System (Applied Biosystems). Expressions of circRNA, mRNA, and miRNA were calculated using the 2-ΔΔCt method, and GAPDH or U6 was used as the internal reference. The primer sequences were: circSERPINA3, 5′- TGCAGAAAGGAGGGTGATTT-3′ (reverse) and 5′- GGCCTCCTGACAGCAATAAA-3′ (forward); U6, 5'‑ACGAATTTGCGTGTCATCCTTGCG‑3' (reverse) and 5'‑CTCGCTTCGGCAGCACATATACTA‑3' (forward); GAPDH, 5'‑TTGATTTTGGAGGGATCTCG‑3' (reverse) and 5'‑GAGTCAACGGATTTGGTCGT‑3' (forward).

The cells were transferred into 6-well plates after transfection and were fixed using 4% paraformaldehyde for 10 min and 0.4% crystal violet was used to stain the cells, after 2 weeks. Finally, the number of visible colonies was determined.

Serum-free media was used to transfect the cells. In order to determine cell invasion, the cells were added into the upper insert of a Transwell chamber (8 μm pore size, Millipore, Billerica, USA) pre-coated with Matrigel (Sigma, USA), while 10% FBS was added into the lower chamber. Methanol and 0.1% crystal violet were used to fix and stain the cells that had invaded after 24 h of incubation. A microscope (Olympus, Japan) was used to observe and count the cells.

Statistical analyses were conducted using SPSS 22.0 software (USA). All data are presented as mean ± SD of experiments performed in triplicate. Student's t test or ANOVA were used to analyze differences. A p value of <0.05 was considered significant. 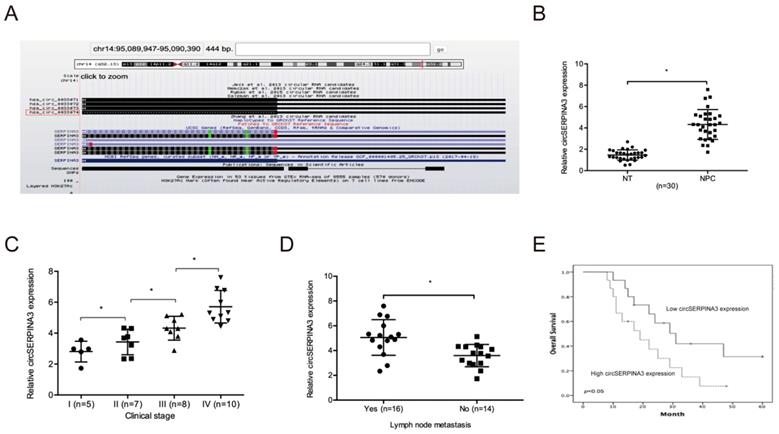 circSERPINA3 was upregulated in NPC

Based on a previous study, we focused on a significantly upregulated circRNA, hsa_circ_0033074 (circSERPINA3) in HNSC [14]. Hsa_circ_0033074 is spliced from the SERPINA3 gene, and the ultimate length is 443 nt (Figure 1A). Subsequently, we explored circSERPINA3 expression in NPC. QRT-PCR showed the significant upregulation of circSERPINA3 expression and its association with lymph-node metastasis and NPC patients of an advanced stage (Figure 1B-1D). Moreover, high expression of circSERPINA3 was found to be correlated with poor overall survival (OS) rate in NPC patients through the Kaplan-Meier analysis (Figure 1E).

The downstream target genes of miR-944 were further explored. The results show that MDM2 is a highly putative target gene of miR-944 (Figure 5A-5C). Subsequently, IHC showed that MDM2 was significantly upregulated in NPC patients with metastasis (Figure 5D), which was confirmed using qRT-PCR (Figure 5E). In addition, an association between high MDM2 expression and poor overall survival of NPC patients was found through Kaplan-Meier analysis (Figure 5F).

Then, we aimed to determine the regulation by miR-944 on MDM2 expression. Results showed the significant decrease of protein and mRNA levels of MDM2 in SUNE1 and miR-944 mimic-transfected HONE-1 cells (Figure 6A and 6B). miR-944 mimics caused a decrease in the luciferase activity of MDM2-Wt group, but not the MDM2-Mut group, as observed using Kaplan-Meier analysis (Figure 6C). In addition, a negative correlation was found between miR-944 and MDM2 expression in NPC tissues (Figure 6D). These results confirmed that MDM2 was targeted by miR-944 in NPC. 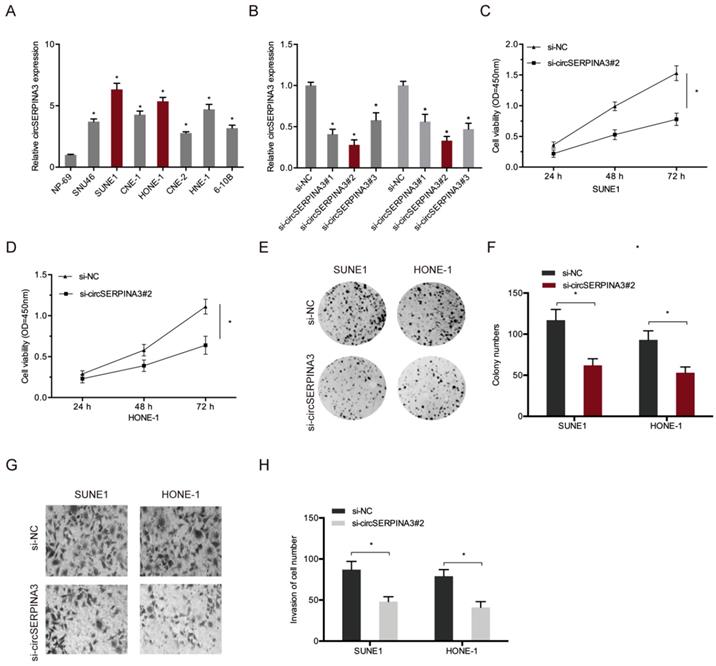 circSERPINA3 interacted with miR-944. (A) Subcellular fractionation assay demonstrated the scattering of circSERPINA3 in the cytoplasm. (B) Target miRNAs of circSERPINA3 was predicted by starBase. (C) The relative expression levels of 12 miRNA candidates in SUNE1 and HONE-1 cells lysates were detected by pull down assay. (D, E) The predicted miR-944 and circSERPINA3 binding sites. (F) MiR-944 mimics decreased the luciferase activity of the circSERPINA3-Wt group. (G) CircSERPINA3 inhibition increased miR-944 expression in NPC cells. * p < 0.05. 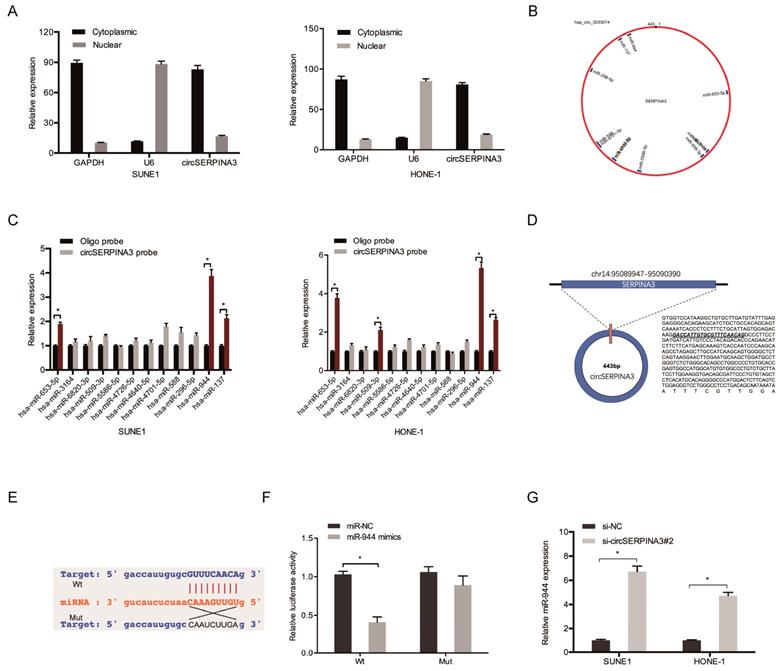 In order to further confirm the circSERPINA3/miR-944/MDM2 axis, the expression of MDM2 in SUNE1 and HONE-1 cells transfected with si-circSERPINA3 and miR-944 inhibitors were determined. Downregulated levels of circSERPINA3 were found to result in a significant decrease in MDM2 expression, while miR-944 inhibitors reversed the effects (Figure 7A). Subsequently, a positive correlation was found between circSERPINA3 and MDM2 expression in NPC tissues (Figure 7B), while the axis was further confirmed in NPC using rescue assays. Colony formation assays were used to demonstrate that the silencing of circSERPINA3 decreased NPC cell proliferation, while miR-944 inhibitors abolished the roles (Figure 7C). Transwell assay revealed that the cell invasion capacities were reduced after circSERPINA3 interference, whereas the decreased invasion capacity was restored by MDM2 overexpression (Figure 7D). Therefore, we suggested that regulation of the miR-944/MDM2 axis by circSERPINA3 could promote NPC progression.

In recent times, a number of studies have shown that circRNAs perform critical functions in NPC carcinogenesis. As an example, in NPC patients, Shuai et al. found an association between circRNA_0000285 overexpression and advanced clinical features of NPC patients [15]. Ke et al. found that CircHIPK3 promoted NPC cell invasion and proliferation through targeting the miR-4288/ELF3 axis [16]. Zhong et al. demonstrated that cRNA CDR1 promotes NPC cell invasion and proliferation by regulating the miR-7-5p/E2F3 axis [17]. However, the functions as well as underlying mechanisms of circRNAs in NPC development are still not well known. 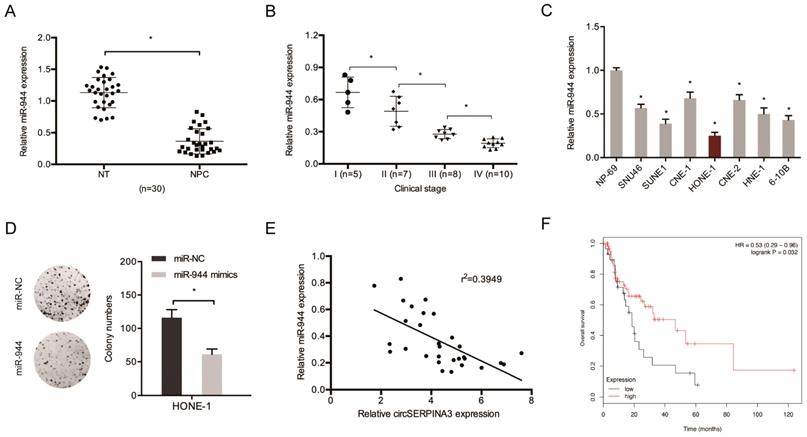 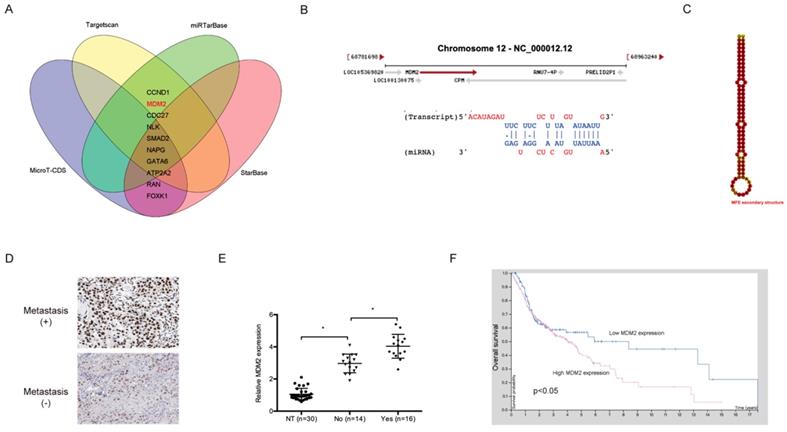 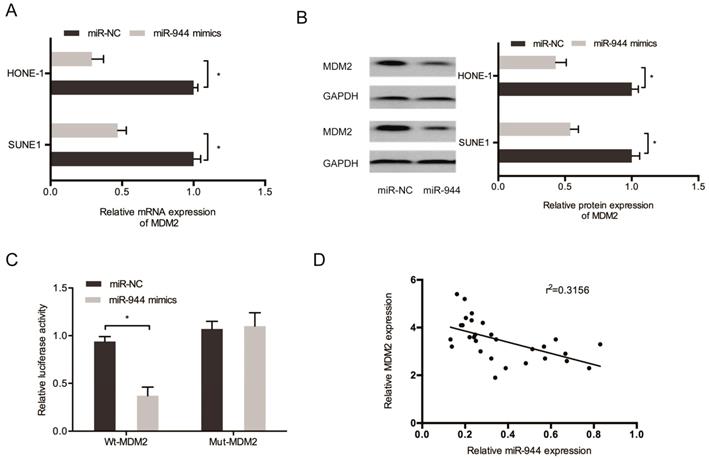 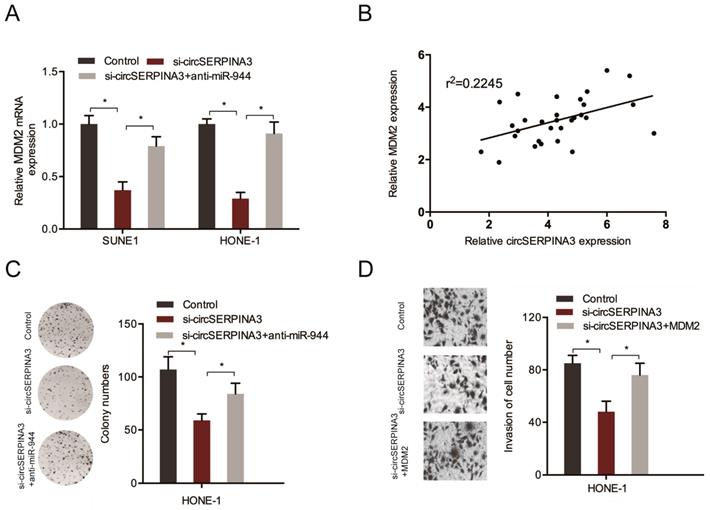 In conclusion, we revealed the significant upregulation of circSERPINA3 expression in NPC and demonstrated its correlation with advanced clinical features, while circSERPINA3 enhanced NPC progression by targeting the miR-944/MDM2 axis. Thus, we suggested that circSERPINA3 might serve as an effective therapeutic in NPC treatment.

MHZ, RL, YLZ conceived and designed this study. MHZ, PWZ, RL conducted the experiments and analyzed and checked the data. YLZ, YJZ, RL supervised the whole project and revised the manuscript. All authors read and approved the final manuscript.