Primary cervical cancer screening by liquid-based cytology alone or with adjunctive HPV testing are available worldwide. However, little if any information is available about cervical cancer diagnostic yield of population-based cervical cancer screening in China. In response to it, we conducted a large prospective study on 40,000 women cervical cancer screening within six-month period in rural Shanxi Province, where has been reported as the highest cervical cancer rates in China. A standard cross-sectional survey by self-completed questionnaire was collected and followed by the liquid-based cytology screening. Follow-up biopsy with the diagnosis of cervical intraepithelial neoplasia 2 or higher lesion (CIN2+) were analyzed. Of initial 40,000 women participating in this study, 6.76% (2702/40,000) women had ASC-US or higher cytology screening results with ASC/SIL ratio at 6.14 (2381:388). Among them, 1.96% (782/40,000) women were found CIN lesions (95% CI, 1.68-2.23%) on confirmatory biopsies, including 0.55% (218/40,000) CIN2+ and 19 SCCa (47.5/100,000, 95% CI, 29-74/100,000). Women in Yangqu County had lower ASC/SIL ratio, but higher CIN2+ detection rate in comparison with that of Jiexiu County (6.69 vs. 8.84 and 56.7% vs. 43.9%), which reflects the cervical cancer distribution in different populations and regions. Analysis in age-stratified cytology results indicated women aged 60-65 years had the highest incidence of cytologic abnormality among all the age group; likewise, women aged >50 years were at higher risk in developing cervical high grade dysplasia or cancer than women aged <50 years (0.82% vs. 0.49%). This large-scale cervical cancer screening study provided important references as the instructive for establishing the nation-wide cervical cancer screening strategy.

Between June 2014 and November 2014, a total of 40,000 (31.8%, 40,000 / 126,000) women aged 18-to 65-year from 126,000 females of 109 villages in Jiexiu and Yangqu County in Shanxi Province were enrolled from total female population of 5,250,000 in Shanxi Province (2.4%, 126,000 / 5,250,000). The project was divided into two phases. Briefly, the first phase was to recruit women who voluntarily filled a standardized questionnaire, included sociodemographic and risk factors. Women were considered to be eligible if they: 1) Han ethnicity; 2) had lived in Jiexiu and Yangqu County for more than 1 year; 3) not being pregnant; 4) had not have the history of hysterectomy or conization; 5) had not have cervical physical therapy or treatment within the past one month. After the interview, 40,000 women were selected to undergo the cervical cancer screening by Pap test. The fieldwork, data collection, and readings were conducted by the expert panel of pathologists at Diagnostics Laboratory of Shanxi Medical University affiliated Second Hospital according to the Bethesda System (TBS). In the second phase, women with cytological results classified as ASC-US or higher on Pap test were referred to the colposcopic assessment. Negative / inadequate colposcopic findings after abnormal cytological results within 12-week warranted the endocervical curettage (ECC). Colposcopy directed biopsy on any suspicious area was taken and sent for pathologic diagnosis.

The procedure and the survey content were approved by the ethics committee of Second Hospital, Shanxi Medical University in China. The privacy were mostly insured during the interviews and procedures. All the protocols and the results are registered into the Chinese Clinical Trial Registrar (registration number: ChiCTR-ROC-15006479).

40,000 eligible women underwent the pelvic exam individually in six-month period and cervical swab sample were obtained simultaneously. All participants were instructed to abstain from sexual intercourse and not to perform vaginal lavage or take medications within 48-hours prior to the sampling. Repeat cytology was warranted for the cases with inadequate Pap cytological reports. All Pap slides were reviewed by two experienced cytopathologists. Cases with the diagnosis of ASC-US or higher were reviewed by the third cytopathologist. All the cytology interpretation were reported by adopting the 2001 TBS [13].

Colposcopy visits were performed within twelve-week window upon the abnormal finding on Paps. During the procedure, entire cervix was carefully examined and all visually abnormal areas were biopsied. Random biopsies from squamocolumnar junction (transitional zone) were taken if absence of visible lesions. Endocervical curettages were proceeded in according to the aforementioned indications [14]. Different gynecologic pathologists reviewed the biopsies and were blinded to the cytologic diagnosis [15]. Review of results used in the present study were based on a consensus or the opinion of a third consultant pathologists.

Descriptive statistics for the sociodemographic characteristics were entered into the database. Statistical Package for the Social Sciences (SPSS) (SPSS Inc, Chicago, IL, USA) were used for data analysis. Measurement data were expressed as means and standard deviation (Mean ± SD), and compared between groups by using analyses of variance. Enumeration date were expressed as rates, statistical analyses by the chi-square tests (χ2 test) for trend testing to compare the trend differences among the groups. The level of significance was set at p<0.05 (2-tiled). Given less than 20 SCCa cases were diagnosed on biopsy, 95% CI was determined through the look-up table method.

Age of participants largely affected cytology results. Table 2 presented the age-stratified cytology results by dividing women into five-age groups with ten-year gap of each group. Abnormal cytology reporting rate (ASC-US and higher) was significantly increased in the age-depended fashion (P<0.001). Of all of the age groups, women aged between 60 and 65 years had peak rate of abnormal Pap results in both Jiexiu (1438, 7.19%) and Yangqu County (1264, 6.23%), whereas women aged <30 years in both counties had least rate of abnormal Pap results with percentage of 2.34 and 2.48 respectively. Noticeably, women at age 50 -59 in both Jiexiu and Yangqu counties had sudden rise in abnormal cytology reporting rate comparing with women aged 40-49 years (12.94% vs. 5.42% and 11.26% vs. 4.38%).

Histological Follow-Up in Women with Abnormal Cytology by County (N=2,691) 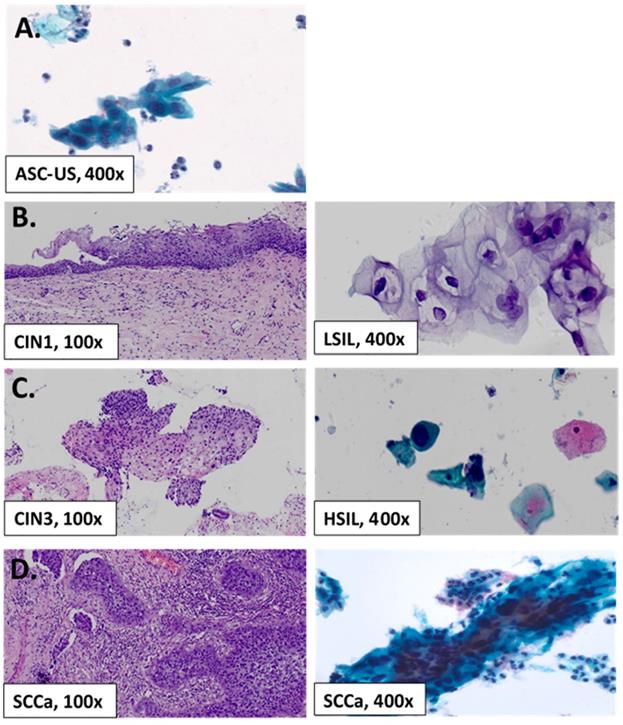 To our best knowledge, this study is one of largest population-based prospective study on cervical cancer screening and cervical dysplasia diagnostic yield in China. 40,000 research subjects were recruited exclusively from the cervical cancer high-risk Jiexiu and Yangqu counties in Shanxi province within six months period. Overall abnormal cytological results was 6.76% (2702/40,000), including 5.76% (2304/40,0000) reported ASC-US, which was higher but consistent with the benchmark data of most recent College of American Pathologist survey (median rate: 5.6%; range: 1.1-13.3%) [17]. The total reporting rate of combined ASC-H, LSIL, HSIL, AGC and SCCa was 1.01%, much lower than 7.1% reported by Pan et al [11]. Likewise, AGC rate of both Yangqu and Jiexiu counties was only 0.03% (10/40,000), much lower than AGC rate in CAP survey in US population (median rate: 0.2%, range: 0-1%) and also lower than that of recent nationwide survey in China (median rate: 0.05%; range: 0-1%) [17,18]. Similarly, Pan et al analyzed patients of community setting from other areas of Shanxi Province and reported 0.2-0.8% AGC rate, in which authors drew the conclusion of low incidence rate of cervical adenocarcinoma in Shanxi women population [11]. But in fact, cervical gland cell abnormalities reporting rate in Chinese female population had been historically low at 0.01-0.06% [4, 19-21]. Our data also showed ASC/SIL ratio of 6.14 (2381:388), which is outside the CAP range (0.8-5; median: 1.9), and higher than the data reported recently by the largest national survey (median: 2.1; range: 0.5-12) [18]. The reasons for it are data elements in CAP report and other studies drew from limited opportunistic screening; by saying it, some patients may already present symptoms while seeking medical attention, resulting in high denominator in ASC/SIL ratio. Additionally, women in Yangqu County were found to have significantly lower ASC/SIL ratio compared with that of Jiexiu County (6.69 vs.8.84; p<0.01), predicting in difference in cervical cancer prevalence between Yangqu and Jiexiu populations. Individual program would have to consider the most suitable cutoff for triage based on regional needs. Likewise, LSIL rate in CAP survey was roughly 0.5 to 6, in contrast to 0.66% in our report, indicating LSIL reporting rate difference between Chinese and Western populations.

Age distribution and sociodemographic factors may be the contributor to the difference in reports. This population based study found that the abnormal cytology reporting rates increased with age, which are consistent with cervical cancer prevalence in China. Overall CIN2 detection rate in women aged >50 was much higher than that of women aged <50 (0.82% vs. 0.49%; 100/12170 vs. 137/27830), similarly in CIN1 detection rate (2.53% vs. 0.92%, 308/12170 vs. 256/27830). In comparison of age distribution between Jiexiu County and Yangqu County, the peak age of abnormal reporting rate fall into 60-65 age group in both counties. Besides, 1565 abnormal cytology women in 50-65 age group accounted for 57.92% (1565/2702) of total abnormal participants. It has been debated that women over the age of 40 maybe start or experience the ovarian insufficiency, hormonal unbalanced, therefore tumor immunity microenvironment slowly decline. Nevertheless, it should be noted that Chinese women age-delay in reporting cytology abnormality reflects the current women health issue in rural China, such as low cervical cancer prevention awareness, delay in seeking timely medical attention and absence of standardized medical care.

We gratefully acknowledge the contribution from coworkers who had involved in conducting the study and writing the article. We thank all the participants and investigators, local healthcare staffs in Jiexiu Family Planning /Women and Children Health Service Center and Yangqu County People' Hospital.

This study is supported by the Special Public Welfare Industry Research of National Health and Family Planning Commission of China (Grant No. 201402010).