Background: Wnt signaling pathway is associated with a variety of human cancers, including HNSCC. Wnt proteins control cellular events such as proliferation, fate specification, polarity, and migration by transducing signals to the nucleus through several cytoplasmic relay proteins. Although activation of the Wnt/β-catenin pathway is a frequent event in various cancers, there is limited knowledge on the contribution of this signaling mechanism in HNSCC. The Wwox tumor suppressor protein participates in the regulation of Wnt signaling by interacting with Dvl proteins.

Methods: In this study, we used qRT-PCR and western blotting to examine the mRNA and protein levels of the Dvls in association with WWOX in HNSCC cell lines and tumor tissues.

Conclusions: Our results suggest that aberrant WWOX expression contributes to HNSCC through the Wnt signaling pathway. Decreased expression of WWOX may function in HNSCC progression by allowing the nuclear localization of Dvl proteins.

HNSCC (Head and Neck Squamous Cell Carcinoma) is the sixth most prevalent cancer with a high mortality rate worldwide (1). Despite the efforts of scientists to understand the molecular mechanism of HNSCC, the 5-year survival is still 50-60% (2). Such a high mortality rate is due to the lack of suitable markers for early detection of disease and failure in response to therapeutic agents. Therefore, understanding the complex mechanism of the disease will lead to early diagnosis and help to develop novel effective therapeutics.

Different molecular mechanisms and pathways are involved in the development of HNSCC including the Wnt signaling pathway which regulates cell proliferation, differentiation and cell motility through the canonical (Wnt/β-catenin) and non-canonical pathways (3, 4). In the canonical pathway binding of Wnt proteins to Frizzled (Fzd) receptors recruit the Dishvelled (Dvl) proteins to the plasma membrane. This leads to activation of the Dvl proteins through phosphorylation. Activated Dvl proteins inactivate the β-catenin degradation complex (APC- Axin- GSK3β) by binding to Axin. As a result, β-catenin gradually increases in the cytosol and migrates into the nucleus where it activates transcription of the target genes (5).

While activation of the Wnt/β-catenin pathway is a frequent event in various cancers, there is limited knowledge on the contribution of this signaling mechanism in HNSCC (6-8). Although Wnt and its receptors Fzd have been analyzed in HNSCC the intracellular components of the pathway have not been investigated (9-11). There are three Dvl protein coding genes in the human genome. These proteins work as down-stream effectors of the Fzd proteins but up-stream of β-catenin in the Wnt signaling pathway (5). Several binding partners of the Dvl proteins have been identified which act in the Wnt/β-catenin pathway. Recently, Bouteille et al. (12) reported that the WWOX protein interacts with Dvl proteins and inhibits the Wnt/β-catenin pathway by preventing the nuclear import of these proteins.

The WWOX gene is located at a common fragile site (FRA16D) which is frequently involved in human cancers. In addition to the homozygous deletion of the WWOX gene its decreased or aberrant expression has also been reported in multiple human cancers (13-16). In our previous study we have shown that the WWOX gene is inactivated in HNSCC as a result of genetic and epigenetic alterations (16). In the present study we aimed to investigate the association between Wwox and Dvl proteins in human HNSCC tumors and cell lines. This is the first study in the literature investigating the expression levels of Dvl proteins in HNSCC.

Tumor and matched adjacent non-cancerous tissues diagnosed with HNSCC, from 98 patients undergoing surgery at the Istanbul University Cerrahpasa Medical Faculty, Department of Head and Neck Surgery were studied. All patients were selected from subjects who were operated with the diagnosis of HNSCC according to previous biopsy results. The patients who had previous chemotherapy or radiotherapy were excluded from the study. All of the samples were also HPV-negative. Inclusion criteria were first time diagnosed HNSCC patients over 18 years. This study was approved by the Cerrahpasa Medical Faculty Ethics Committee (Approval Number:83045809/604.01/02-173216). All subjects gave written informed consent in accordance with the Declaration of Helsinki. Clinicopathological characteristics including age, gender, TNM clinical staging, location of tumor, invasion status, pathology and histologic grade are shown in Table 1.

Clinicopathological parameter of the HNSCC patients

Expression levels were quantified by quantitative Real Time PCR (qRT-PCR) using the LightCycler 480 (Roche Diagnostics, Mannheim, Germany). qRT-PCR was performed using TAMRA hydrolysis probes for WWOX and SYBR Green for DVL-1,DVL-2, DVL-3 expression analysis. All values were calculated by normalizing the levels of each target for each cDNA to the Glucose-6-Phosphate Dehydrogenase (G6PD) levels and then by using this value to calculate fold-changes compared to control. Primer sequences which were used for expression analysis are shown in Table 2. qPCR reactions were performed at least for 3 times.

Bouteille et al. (12) have reported that WWOX inhibits the Wnt/β-catenin pathway via interacting with the Dvl proteins. Therefore, to test the effect of the WWOX gene on the intracellular components of the Wnt/β-catenin pathway we silenced the WWOX gene in the high-WWOX expressing HET-1A cell line. After silencing WWOX we investigated the expression levels. Despite silencing of the WWOX gene, expression of DVL-2 was down-regulated in WWOX-siRNA transfected cells compared to cells which were transfected with non-targeting control siRNA (Table 3), but DVL-3 expression was up-regulated. 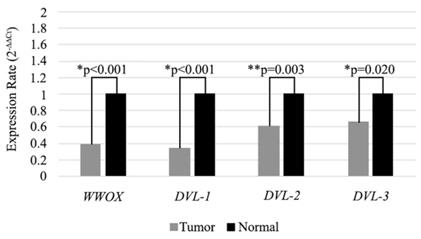 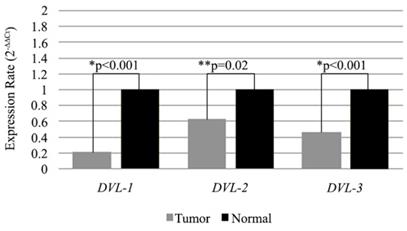 Additionally we also compared expression levels of the DVL genes in low WWOX expressing tumor samples with the matched non-cancerous tissues. All of the three genes were low in tumors compared to non-cancerous tissue samples and differences were statistically significant (Figure 3).

Distribution of the expression changes of WWOX, DVL-1, DVL-2 and DVL-3 in tissue samples

Subsequently, we also investigated cytoplasmic and nuclear protein levels in a subgroup (n=50) of the tumors and corresponding non-cancerous tumor samples. As a result of this investigation, we identified down-regulation in the cytoplasmic Wwox proteins in tumor tissues compared to non-cancerous tissue samples. While, Dvl-1 protein levels were increased in the nuclei of the tumor tissues, there was a decrease in the nuclear levels of the Dvl-2 and Dvl-3 proteins (Table 6, Figure 4).

Aberrant activation of the Wnt/β-catenin pathway is one of the most common mechanisms in human cancers including HNSCC (6). There are more than 50 known protein components of the canonical Wnt signaling pathway (5). Therefore, abnormalities in any one of several key members of this pathway may contribute to oncogenesis. As a result of GO (Gene Ontology) and KEGG (Kyoto Encyclopedia of Genes and Genomes) pathway analysis Yan et al. (17) reported that genes in the Wnt signaling pathway are upregulated in HNSCC. Furthermore, Rampias et al. (18) reported that activation of the Wnt pathway was associated with the HPV E6/E7 protein in HNSCC. Despite investigation of the components of the Wnt/β-catenin pathway, the importances of Dvls which are central mediators of the pathway are poorly defined in cancers including HNSCC (19). Therefore, in the present study we investigated expression rates of DVL mRNAs in HNSCC tumor tissues and cell lines. The majority of the reports in the literature indicate that Dvls are overexpressed in various tumor types (20-23). However, contradictory reports are also present. For instance, Li et al. (24) reported a decrease in DVL1 and DVL2 expression in contrast to an increase in DVL3 expression in NSCLC. The expression changes of DVL mRNAs available in the ICGC data base (25), which includes results from 981 HNSCC tumors are similar to the data reported by Li et al. In line with this, we detected down-regulation of DVL2 mRNA in HNSCC tumor tissue samples compared to their non-cancerous counterparts. However, the expression profiles were different in cell lines. Expression rates of DVL1 and DVL3 were higher in the SCC-15 tumor cell line compared to the HET-1A normal cell line. This difference may be due to the fact that regulation of gene expression in vivo or under physiological conditions may be distinct from that observed in vitro. The results from databases (Expression Atlas, GTEx and CCLE) are also in line with our results. As seen in those databases WWOX and DVL2 expression rates are low in tongue, oral and pharyngeal squamous cell carcinoma cell lines including the SCC-15 cell line. In contrast to WWOX and DVL2, expression rates of DVL1 and DVL3 were higher in cancer cell lines compared to normal (26-28).

After the identification of Wwox as a tumor supressor a new interacting partner has been identied regularly. Previously, it has been shown that Wwox exerts its tumor suppressor function via interacting with p73, AP2-γ,C-jun, ErbB-4 and finally Dvl proteins (12, 34-38). In our previous study we reported that WWOX contributes to HNSCC tumor formation or progression as a result of genetic or epigenetic inactivations. Our present findings suggest that Wwox exerts its tumor suppressor function via Dvl proteins which are the key components of the oncogenic Wnt/β-catenin pathway.

This research was supported by The Scientific and Technological Research Council of Turkey (TUBITAK) with the project number: 114Z882.

7. Kikuchi A. Tumor formation by genetic mutations in the components of the Wnt signaling pathway. Cancer Sci. 2003;94:225-9