Background and Aims: Extrahepatic cholangiocarcinoma (CCA) without liver-fluke is increasing. Multifactorial carcinogenesis makes it hard to find biomarkers related to CCA. Although there are a few studies of bile proteomics, these showed different protein profiles because of having heterogeneous groups of patients and different sampling methods. Our aim was to identify the specific bile proteins of extrahepatic CCA patients.

Conclusions: In this study, we identified several proteins that were significantly increased in the bile of extrahepatic CCA. Further study is needed to validate them as potential tumor-associated proteins that may be potential biomarkers for CCA.

Cholangiocarcinoma (CCA) is a lethal malignant tumor with dismal outcomes; diagnosis in its early stage is very important. The diagnosis of CCA, especially when CCA is accompanied with extrahepatic bile-duct stricture, is very difficult, even using blood tests, imaging studies, and endoscopic methods. Although the direct tissue sampling using endoscopic retrograde cholangiopancreatography (ERCP) is a proper diagnostic tool, there are some limitations for achieving adequate sample [1].

Several studies have investigated the possibilities of liquid biopsy using blood, bile juice, sweat, urine, and feces as a novel and noninvasive diagnostic method [2-5]. Cancer-derived protein can be released into bile by necrosis and apoptosis of tumor cells, and bile includes tumor-specific molecules and provides useful information during malignant transformation in real time [5,6]. Use of proteomics to detect biomarkers in bile may hold promise in aiding differentiation of malignant from benign biliary strictures. To date, a few studies have investigated the proteins in bile. Despite improvements in bile analysis, a promising diagnostic biomarker remains unknown, because the results were not consistent. Besides the diversity of bile proteins, there are the diversity of bile sampling, enrolled patients, and the anatomic location of CCA.

Thereafter, we explore the comparative bile analysis of patients with extrahepatic CCA and control patients without bile-duct disease.

Patients who had undergone ERCP with endoscopic nasobiliary drainage (ENBD) were enrolled in Korea University Guro Hospital from May 2018 to December 2019. The inclusion criterion was age > 18 years.

The patient group was 18 patients who had extrahepatic CCA based on histologic diagnosis. Patients with gallbladder or ampullary caner were excluded.

The control group was 5 patients who had undergone ENBD without biliary disease. They needed bile drainage for bile-duct injury after a hepatobiliary operation (2 patients) or benign ampullary stenosis (3 patients).

In both groups, we excluded patients with symptoms of cholangitis or turbid bile on visual exam and patients who could not have a normal diet. All recruited patients had at least six months follow-up to exclude the possibility of misdiagnosis as malignancy of a benign condition in three patients who had benign ampullary stenosis.

Informed consent was obtained from all patients. This study was approved by the Ethics Committee at Korea University Guro Hospital (approval number 2018GR0133).

We obtained approximately 5 mL of fresh bile through the ENBD tube after drainage of stagnant old bile, about two or three days after the ERCP procedure. On same day, we obtained blood tests and clinical information. The collected bile samples were directly frozen at -80°C until analysis.

A bile sample of 1 mL was centrifuged at 10,000 x g and 4°C for 15 minutes. We mixed the supernatant collected after centrifugation with 9 mL of ice-cold methanol. The mixture was incubated overnight at -20°C. After confirming the precipitate, we centrifuged the sample at 14,000 x g, 4°C for 30 minutes and the supernatant was removed. After we repeated the centrifuging of the sample and removed of the supernatant, the pellet was dried in the air, then dissolved in lysis buffer (20 mM Tris-Cl (pH 8.0), 150 mM NaCl, 2 mM EDTA, 10 % Glycerol, 1 % NP-40). We then measured its protein concentration with the Bradford Assay.

An aliquot of 100 ul (100 μg of lysate resuspended with 50 mM ammonium bicarbonate solution) was reduced with 10 mM DL-Dithiothreitol Solution by shaking for 1 hour at 37°C and was alkylated with 50 mM Iodoacetamide at room temperature and was shaken for 1 hour in the dark. To reduce the Dithiothreitol concentration to a final 1 mM with 1.000 μl volume, we added the 50 mM ammonium bicarbonate. The sample was then digested with trypsin at a protein-to-enzyme ratio of 40:1 at 37°C overnight.

We did LC analysis using a Thermo Scientific Eazynano LC II autosampler with a reversed-phase peptide trap EASY-Column (100 μm inner diameter, 2 cm length) and a reversed-phase analytical EASY-Column (75 μm inner diameter, 10 cm length, 3 μm particle size). The extract was injected in 1/10 volumes, and we did LC using 0.1% formic acid in water as buffer (A) and 0.1% formic acid in acetonitrile as buffer (B), at a flow rate of 300 nL/min.

Each processed databit was subsequently transformed to the Sorcerer 2 and Scaffold 4 program. The search parameters used were as follows: 25 ppm tolerance for precursor ion mass and 1.0 Da for fragment ion mass. Finally, protein and peptide were displayed with threshold 80 %, minimum peptides 2, and quantified by Top 3 Total Ion Chromatogram (minimum value =0.01, Normalization) method. We also did protein classification based on functional annotations using Gene Ontology for molecular function, biological processes, and cellular component categories.

We analyzed a total of 23 bile samples, from the 18 patients with extrahepatic cholangiocarcinoma and the 5 patients with benign biliary conditions in the control group. The baseline characteristics of the enrolled patients are summarized in Table 1.

Each of the 23 bile samples was processed by LC-MS analysis for protein identification and quantification.

Number of proteins identified in control (normal) and cancer patients 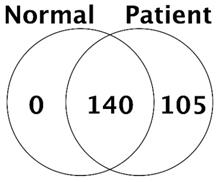 Top 14 Proteins identified as more abundant in cholangiocarcinoma than control

Proteins identified as significantly increased in cholangiocarcinoma than control 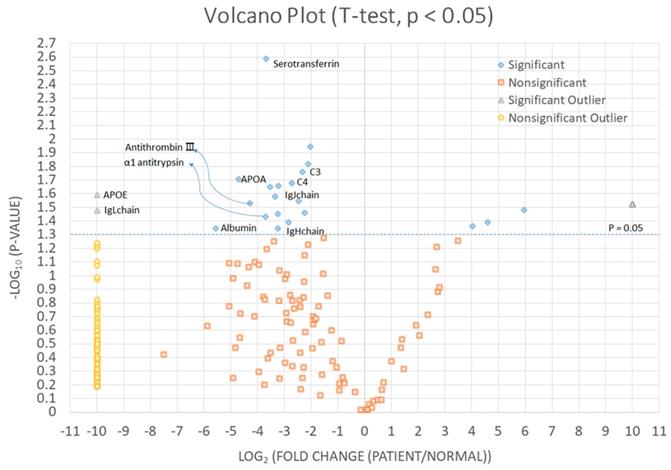 Bile of patients with CCA

In the cellular component part, proteins originating from the extracellular region were the most common (13%), followed by the intracellular organelles (11%) and cytoplasmic part. Other identified proteins were from organelle parts, membranes, plasma membranes, nuclei, endoplasmic reticula, and so on. However, proteins of unknown origin were considerably high, at 14.2% (Fig. 3).

Proteins with molecular functions were the most abundant (21.9%), and then proteins in categories of binding and catalytic activities (Fig. 5).

Tissue sampling such as cytology or biopsy through ERCP is not enough. The sensitivity for malignancy diagnosis by ERCP with radiologic evaluation and biopsy is only 9-57% [7,8].

In cellular component part, proportion of identified proteins in bile 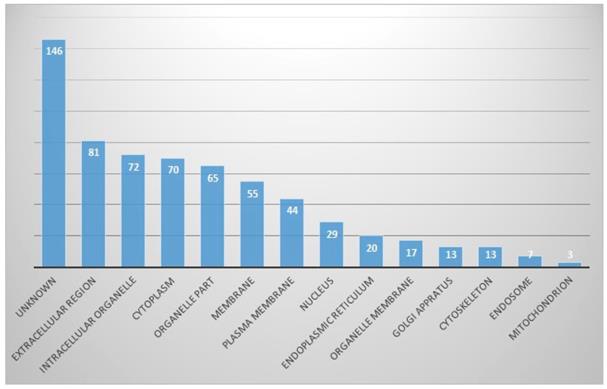 In biological process part, proportion of identified proteins in bile 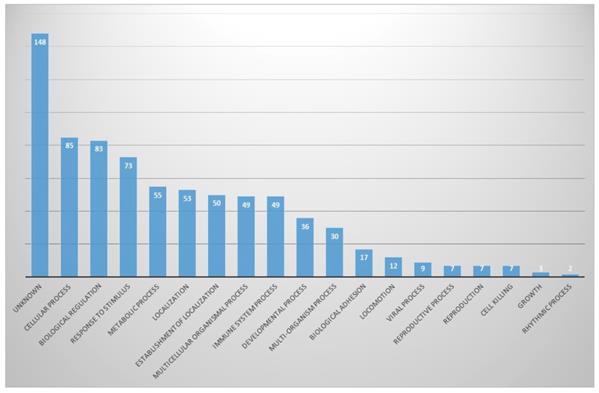 In Molecular function part, proportion of identified proteins in bile 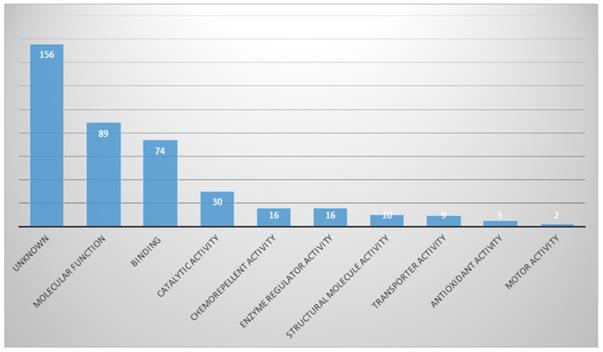 Bile analysis for diagnosis of CCA is a promising method, especially in differentiation of biliary stricture, because CCA which originates from the biliary epithelium might release proteins from cancer cells into bile [9]. Thus, proteomic analyses of bile for discovering CCA biomarkers have been done in many studies [9-15]. However, the bile-protein profiles of CCA were different from the studies. One reason for those differences is the diversity of CCA types enrolled in studies. Previous studies enrolled both of intrahepatic and extrahepatic CCA in the same study. CCA is a heterogeneous entity and is defined by anatomic location as intra or extrahepatic CCA [15]. For intrahepatic CCA, the different characterization depended on whether the liver is cirrhotic or not [15]. Thus, the tumor character differences by anatomical location might affect the bile-protein profile. One study demonstrated that intrahepatic CCA is a heterogeneous group affected by background liver conditions on tumor biology, while extrahepatic CCA is a more homogeneous subgroup [15]. For elimination of heterogeneity of cancer tissue, we enrolled only extrahepatic CCA in our study.

Previous studies of bile proteome analysis for CCA biomarkers were usually based on comparison between CCA and control groups. The control group showed diversity in the studies and contained various disease entities, such as benign biliary conditions, choledocholithiasis, and even primary sclerosing cholangitis (PSC) [9-15]. It has been known that proteins associated with the Wnt signaling pathway were highly expressed in CCA without PSC [16,17]. However, pathogenesis of PSC-associated CCA is more complex, and pro-inflammatory cytokines might have an important role [18]. One study of bile proteomic analysis showed that the most elevated pathways in PSC-associated CCA were inflammation-associated cytokine and chemokine pathway; however, the Wnt signaling pathway was mainly elevated in CCA without PSC [14], which suggested that enrolled patient diversity in the control group might affect the diversity of the bile-protein profile in the studies. Thus, we enrolled only benign biliary conditions that needed bile drainage and were not induced by biliary disease. Those patients seemed to be closer to a normal control.

Apolipoprotein E is involved in DNA synthesis, cell proliferation, angiogenesis, and metastasis, and changes of these functions might induce tumorigenesis or progression [19].

Antithrombin is known as a protein related with hemostasis, but it has been studied as an anti-tumor effect through inhibiting a protease involved in metastasis and generating an anti-angiogenic molecule [26]. It was reported as a modulator of tumor cell migration and invasion in gastric cancer [27]. And the novel function as a diagnostic biomarker was studied in hepato-pancreato-biliary malignancy [28, 29]. In our result, antithrombin-III was significantly increased in the bile of CCA.

Liver has Kupffer cells and several immune cells and plays an important role in immune response [35]. Immunoglobulin A is known as an abundant protein in normal bile, contributes to immunological surveillance within the biliary system [36]. Clinically, increase in serum immunoglobulins are observed in specific hapatobiliary diseases such as autoimmune hepatitis (elevated IgG), primary biliary cirrhosis (elevated IgM) and alcoholic liver disease (elevated IgA), Immunoglobulin G4-related sclerosing cholangitis (elevated IgG) [36]. It has not been known whether immunoglobulins are increased in bile of biliary tract cancer. In our study, immunoglobulin kappa light chain showed the greatest change between the CCA and control groups. In addition to Immunoglobulin, complement proteins were reported to participate in local immune response in the biliary tract [35]. A recent study of plasma proteins analysis found that complement C3 and apolipoprotein C-III were essential proteins in HCC [37]. Our results showed that complement C4 and C3 were significantly elevated in CCA patients. Another study of bile proteomic analysis that distinguished CCA from PCS showed that ITIH4 was elevated in CCA [9], as is similar to our study but it was not significant. ITIH4 is a serum glycoprotein secreted mainly by the liver [38-40], and involved in stabilization of the extracellular matrix [40,41]. A previous study showed that ITIH4 plays a significant role in the pathway involved in TGF-β and fibrosis-independent carcinogenesis [38, 42]. In a study of pancreatic cancer biomarkers using pancreatic juice samples, potential biomarkers complement C5 and ITIH3 were elevated in cancer, but biliary obstruction had a significant effect on the performance of the markers [42].

Albumin is produced solely by hepatocytes and relatively abundant protein in bile. It was founded that the neonatal Fc Receptor is required for delivery of synthesized albumin to the blood stream and absence of this receptor results in increased albumin levels in the bile [43]. Cholangiocyte is differentiated from liver progenitor cells and alterations in bile secretion and abnormal bile composition can result in hepatocellular and/or bile duct injury [44,45].

Cholangiocarcinoma cell arising from cell proliferation after bile duct injury could be a form of undifferenciated cholangiocyte producing albumin. There are several reports on aberrant expression of albumin; it could be used to distinguish bile duct neoplasm from other metastatic adenocarcinoma [46-48].

This research was supported by Korea University Grant (K1723411).