The genetic profile between young PCa and 'classical' or PCa arising in older men are different [3,6-9]. Previous studies also have revealed different genetic alterations in young PCa, such as a greater number of single nucleotide polymorphism in the germinal DNA [6-8], different expressed genes involved in the inflammatory and immune-related pathways (CTL4, IDO1/TDO2) [9], and gene mutations in BRCA 1 and 2, and HOXB13 [5]. The relative risk to develop PCa in patients with BRCA 1 mutations has been reported as 1.8-4.5, while the relative risk reported in patients with mutations in BRCA 2 is 23, and patients with HOXB13 mutation have eightfold higher risk [5]. PCa in young man with mutations in BRCA 1 and 2 has been associated with unfavorable prognosis, in contrast to patients with HOXB13 mutations were the genetic alteration has been associated with a favorable prognosis [5].

The molecular pathway of PCa in younger men is unknown. Weischenfeldt, et al. [7] recognized the important role of androgen regulated transmembrane serine protease 2 (TMPRSS2) gene fusion with the ERG gene. This fusion is a very early event in prostate oncogenesis and might be driven by increased androgen stimulation. Young PCa patients have a significantly increased tumor androgen receptor levels and positive correlation with ERG rearrangements. The frequency of ERG rearrangements in younger PCa patients is approximately 64% [10,11]. TMPRSS2-ERG fusion positive cases are associated with loss of PTEN suppressor gene and TMPRSS2-ERG fusion negative cases with loss of 5q21 and 6q15 [12].

Differences in clinical behavior between young and older PCa patients are controversial [3]. Some studies report aggressive biological behavior and higher Gleason score in the young [3,11,13,14] while other studies report no significant difference in survival across age groups after prostatectomy, brachytherapy and radiation therapy [3,15,16]. Schaefer et al. [10] observed that ERG-positive status was associated with low-serum PSA and lower prostate volume, while Huang et al. [11] further confirmed the ERG-positive status was associated with Gleason score and higher biochemical relapse rate but not with presurgical PSA levels, tumor volume, pathological stage, surgical margin or lymphovascular invasion.

MicroRNAs (miRNAs) are small, non-coding RNA molecules with multiple roles in many biological processes. They can prevent protein expression through cleavage of specific target mRNAs or through inhibition of their translation [17]. Since the discovery of miRNAs, numerous studies have demonstrated their relevance in carcinogenesis of several cancers [18]. Recently, it has been demonstrated the relevance of miRNAs in PCa as biomarkers in diagnosis, treatment, and prognosis.

In this study, we investigated whether PCa arising on younger men has a different microRNA profile compared to PCA in older men in order to further characterize its potential role in tumorigenesis, tumor progression and disease prognosis.

Total RNA samples were analyzed according to the manufacturer's instructions for the nCounter Human miRNA Expression Assay kit (NanoString Technologies, Seattle, WA). From each sample 100 ng from total RNA sample was used as input into the nCounter Human miRNA sample preparation. Hybridization was conducted for 16 h at 65°C. Subsequently, probes were purified and counted on the nCounter Prep Station. Each sample was scanned for 600 FOV (fields of view) on the nCounter Digital Analyzer. Data was extracted using the nCounter RCC Collector. The analysis was made as we described previously [22]. miRNAs raw data was normalized for lane-to-lane variation with a dilution series of six spike-in positive controls. The sum of the six positive controls for a given lane was divided by the average sum across lanes to yield a normalization factor, which was then multiplied by the raw counts in each lane to give normalized values. For each sample, the mean plus 2 times the standard deviation of the 8 negative controls was subtracted from each miRNA count in that sample. Only miRNAs with non-negative counts across all samples were retained for downstream analysis. The relative miRNA levels were indicated as median fold changes (tumor/normal tissue) and a cutoff of 1.5-fold-change (up or down) was used.

Assessment of prognostic significance of miRNAs associated with clinicopathological features

With PROGmir V2 we compared the overall survival, relapse-free survival, and metastasis-free survival of prostate adenocarcinoma patients with high and low expression of miRNAs associated with clinicopathological features. PROGmiR V2 is an online free tool that combines the prognostic data of miRNAs for different kinds of cancers [23].

Only mature miRNAs that showed at least a 1.5-fold change in expression are reported. p-values were calculated for each miRNA between the normal and tumor samples using the biological replicates and genes. They were considered differentially expressed and statistically significant if their p value was < 0.05. To compare relative miRNA fold changes between Young PCa and older PCa patients we used Mann-Whitney and Kruskal-Wallis non-parametric tests. According to edgeR, t-tests were carried out to compare the two groups (tumor vs. normal), p value was adjusted for multiple comparisons with the calculation of the false discovery rate (FDR) (<0.05). To evaluate differences between miRNA expression and clinicopathological features (Gleason score was categorized in low grade (3+3; 3+4) and high grade (4+3; 4+4;5+5)) we used t test. Supervised and non-supervised hierarchical clustering was conducted based on the Euclidean distance of miRNAs in samples using the Pheatmap package in R3.5.1. Analysis was performed using STATA SE 15 and R3.5.1.

Clinicopathological features of prostate cancer patients included in the study. 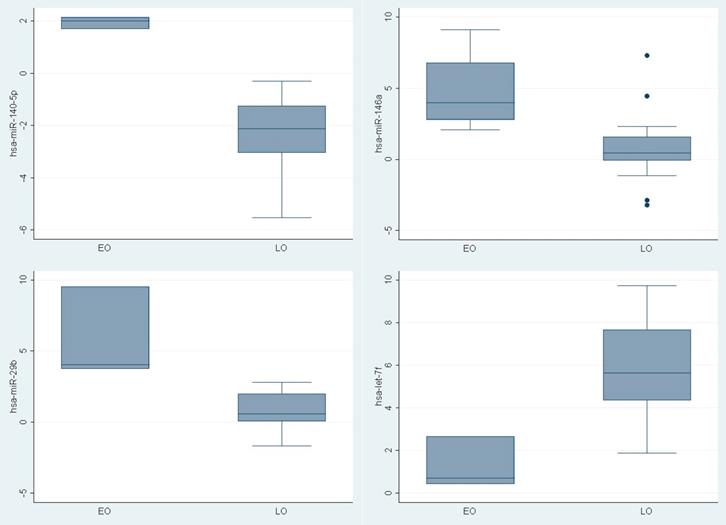 Supervised hierarchical clustering of the miRNAs down-regulated with FDR <0.05 was made based on miRNAs normalized expression, showing two groups separating normal and tumor epithelium mainly based the miR-205 expression, indicating a cancer specific expression pattern (Figure 2). 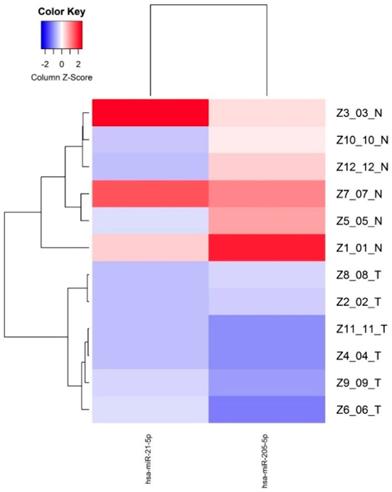 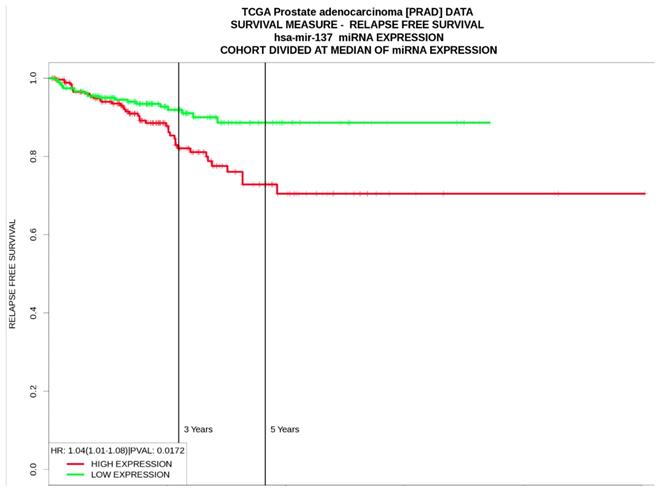 Several miRNAs were observed dysregulated when we compared tumoral tissue versus tissue in Young PCa. Fourteen miRNAs were upregulated (Table 3). hsa-miR-93-5p has been reported overexpressed in PCa [27] and may are involved in cell proliferation, migration, invasion, block cell cycle, and promote the early apoptosis [27]. In a previous study, it was found that hsa-miR-93 with hsa-miR-106b and miR-375 may downregulate CIC-CIC-CRABP1 and promote the progression of PCa [28]. In young PCa, Weischenfeldt et al. found hypomethylation in the promotor region (R: -0.682, p<0.001) [7]. On the other hand, hsa-miR-25-3p is part of a cluster with hsa-miR-93, hsa-miR-25 and hsa-miR-106b [29]. This miR-106b-25 cluster promotes cell-cycle progression and hyperproliferation due to relationship with several actors in different oncological pathways such as PTEN, E2F1, and p21/WAF1 [30-32]. In PCa, the expression of this cluster is high and has been associated with tumor progression and metastasis [21,33]. In a previous study, we had already observed upregulation of miR-25 in tumor cells versus normal epithelium [21]. In young PCa the hypomethylation of the hsa-miR-25-3p promotor region (R: -0.625, p<0.001) has also been observed [7].

Among the miRNAs without previously reported association and whose biological functions have not been characterized in PCa are hsa-miR-1973, hsa-miR-575, hsa-miR-630 and hsa-miR-600. hsa-miR-575 and the hsa-miR-630 are proposed oncomiRNAs in other tumors such as gastric cancer, lung cancer, renal cell carcinoma, hepatocellular carcinoma, and breast cancer [34-40]. hsa-miR-630 has different gene targets such as BCL-2, MTDH, YAP-1, SNAI2 [37-39] involved in PCa oncogenesis [41-44]. hsa-miR-575 has as a target BLID (BH3-like motif containing, BRCC2). BLID is a tumor-suppressor gene involved in DNA repair and gene integrity [40]. In breast cancer, BLID inhibited cancer cell growth and metastasis via downregulating AKT pathway [40]. In prostate cancer cell lines, it has been demonstrated that BLID induce a caspase-dependent mitochondrial pathway of cell death [45]. Expression of hsa-miR-1973 has noted in other tumors as breast cancer, Hodgkin lymphoma and ovarian cancer [46-48]. Other miRNA without previously reported in PCa is hsa-miR-600, this has been involved in breast cancer, lung and colorectal cancer [49-51].

The present study supports the hypothesis that young PCa have a different miRNAs signature compared with normal tissue and older PCa patients. We present new miRNAs that may be involved in PCa pathogenesis (e.g. hsa -miR-1973, hsa-miR-575, hsa-miR-630, hsa-miR-3195), and present miRNAs with different expression (high or low) compared with previous studies (e.g hsa -miR-494, 150-5p, hsa -miR-137, hsa -miR-548ai, hsa -miR-21). In addition, we show that low expression of miR-600 and miR-137 were associated with clinicopathological features with poor prognosis and with poor relapse‐free survival. The identification of these miRNAs may provide insights into understanding this subtype of PCa and these miRNAs may prove to be useful as a biomarker in the diagnosis, prognostic as well in the development of new therapeutic approaches. More studies with larger sample size are needed to confirm the results presented in this study and to correlate them with clinicopathological outcomes in young patients with PCa.