Purpose: The initial step of cancer metastasis is that cancer cells acquire the capability to migrate and invade. Eph receptors comprise the largest family of receptor tyrosine and display dual role in tumor progression due to unique ephrin cis- or trans- signaling. The roles of EphB1 and its phosphorylation signaling in lung cancer remain to be elucidated.

Patients and Methods: We analyzed the expression of EphB1 in both publicly available database and 60 cases of NSCLC patients with or without metastasis. The migration and invasion of lung cancer cells were assessed by a transwell assay. The activation of EphB1 signaling was assessed by western blot and real-time PCR. The EphB1 mutant was used to evaluate the effect of phosphorylation of EphB1.

Conclusion: Our results showed that the effect of EphB1 on the migration and invasion was context-specific and was dependent on EphB1 phosphorylation.

Non-small cell lung cancer (NSCLC) accounts for approximately 80% of lung cancer cases. Metastasis is the major reason for the mortality of lung cancer patients. Cancer cell migration and invasion are initial steps in metastasis1,2. Epithelial-mesenchymal transition (EMT) of cancer cells is believed to be crucial for cancer cell invasion3. The process that epithelial cancer cells lose their polarity and displays mesenchymal phenotype is called EMT. Eph receptors, which comprise the largest family of receptor tyrosine kinase, have been found to play a role in EMT4. The Eph receptors are divided into 2 subclasses: nine EphA receptors and five EphB receptors. Ephs and their ligands ephrins trigger bidirectional signal pathway upon cell-to-cell contact5. Eph/ephrin interactions have been implicated in various pathologic processes, including inflammation, neural development, and angiogenesis6-8. Eph forward signaling that depends on Eph kinase activity has been involved in cell migration and evasion5. However, bidirectional signals can also mediate cell repulsion5.

Eph receptors display dual role in tumor progression and tumor suppression9. EphB subgroup and the Ephrin-B subgroup are coexpressed in SCLC cell lines and tumors, modulating the behavior of SCLC through autocrine or juxtacrine activation10. EphA/B mutation or amplification can be found in 16% of lung adenocarcinoma patients11. EphB3 promotes cancer cell survival and migration by enhancing DNA synthesis and inhibiting apoptosis in NSCLC cells12. Eph receptors that are activated by ephrins can inhibit oncogenic signaling pathways, such as the HRAS-Erk, PI3K-Akt and Abl-Crk pathways5. The paradox may be because of the cis and trans signaling or ligand-dependent or ligand-independent Eph signaling.

In this study, we found that ligand-independent EphB1 promoted lung cancer cell mobility and invasion. TGF-β-activated Smad2 transcriptionally interacted with a Smad2-binding element in EphB1. Ligand-independent EphB1 promotes EMT through upregulating CDH2. However, the ligand induced EphB1 phosphorylation inhibited lung cancer mobility and invasion. A better understanding of context of EphB1 signaling can help to explain the paradox roles in cancer progression.

NSCLC cell lines A549 and H460 were cultured in RPMI-1640 medium supplemented with penicillin G (100 U/mL), streptomycin (100 mg/mL) and 10% fetal calf serum. HEK293 cells were cultured in Dulbecco's modified Eagle medium (Gibco) with 1 g/L glucose and 10% FBS. All cell lines were obtained from ATCC. Cells were grown at 37°C in a humidified atmosphere of 5% CO2 and were routinely sub-cultured using 0.25% (w/v) trypsin-EDTA solution.

Clinical characteristics and EphB1 expression in 60 cases of NSCLC.

The protein lysate used for western blotting was extracted using RIPA buffer (Biotime, Hangzhou, China) containing protease inhibitors (Roche, Basel, Switzerland). Proteins were quantified using the BCATM Protein Assay Kit (Pierce, USA). A western blot system was set up using a Bio-Rad Bis-Tris Gel system, according to the manufacturer's instructions (Bio-Rad, CA, USA). The cell protein lysates were separated on 10% SDS-polyacrylamidegels and electrophoretically transferred to polyvinylidene difluoride membranes (Millipore, Danvers, MA, USA). The primary antibody solution was prepared in 5% blocking buffer. Primary antibodies against EphB1 (Abcam, USA), p-EphB1 (Abcam, USA) were incubated with the membrane at 4 ºC overnight, followed by a brief wash and incubation with secondary antibody for 1 h at room temperature. An anti-GAPDH antibody control was purchased from Proteintech (Chicago, USA) and was used as a loading control. Finally, a 40:1 solution of peroxide and luminol was added to cover the blot surface for five minutes at room temperature. The chemiluminescent signals were captured, and the intensity of the bands was quantified using a Bio-Rad ChemiDoc XRS system (Bio-Rad, CA,USA).

Lung biopsies were fixed and embedded in paraffin wax. Four- to six-μm thick paraffin sections were defaced followed by hydration. Tissue sections were incubated with primary antibody at 4°C overnight in a humidified chamber. After extensive washing with PBS, sections were incubated with biotin-linked goat anti-rabbit IgG antibodies (UltraSensitive S-P Kit, Maixin Biotechnology Company, Fuzhou, China). The sections were then washed and followed by developing in 3'-diaminobenzidine hydrochloride (DAB) as chromogen, and sections were counterstained with haematoxylin. Finally, after dehydration and mounting, the sections were observed and imaged under microscope (OLYMPUS BX-51, Japan). Goat serum and PBS were used instead of the first antibody as a negative control and blank control respectively. A semi-quantitative scoring criterion for IHC was used in which both the staining intensity and positive areas were recorded.

The proliferation of lung cancer cells was measured using the CCK-8 assay (Bimake, China). The cell suspension was inoculated in a 96-well plate. After treatment, 10 μl of CCK-8 solution was added to each well and the plate was incubated for an additional 4 hrs. Next, the absorbance measured at 450 nm using a microplate reader. The experiment was repeated three times, and six parallel samples were measured each time.

ChIP assays were performed as described20. Briefly, A549 cells were crosslinked in 1% formaldehyde for 10 min at 37 °C to generate DNA-protein complex. Cell lysates were then sonicated and immunoprecipitated with anti-Smad2 or with IgG (control). The precipitated DNA fragments were purified and analyzed by PCR and agarose gel electrophoresis. PCR was performed using promoter-specific primers for EphB1 with amplification of the Smad2-binding regions. Primers were synthesized as follows: Forward: CCTTCCCACCCACACTGAAG; Reverse: GGTTGCCTTTGGTGTTCACTT. 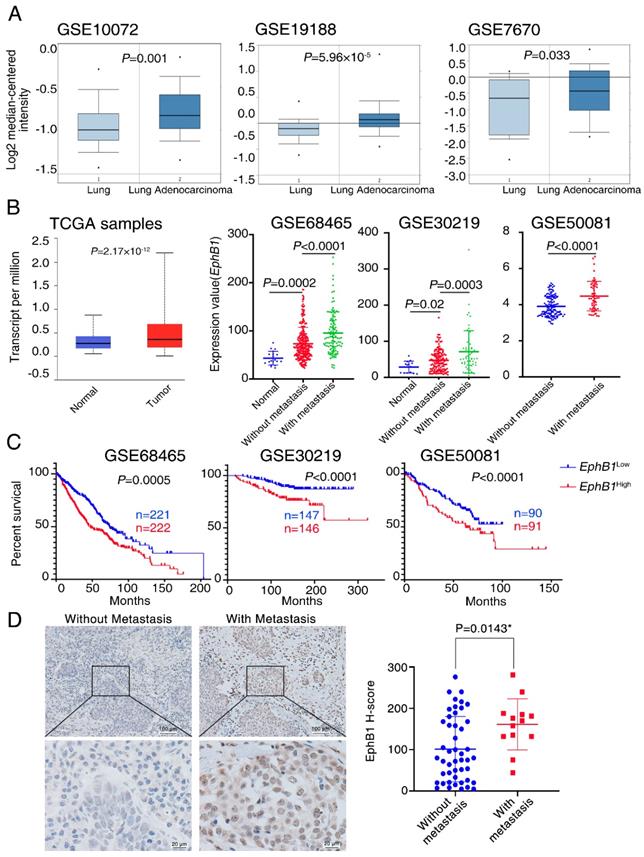 TGF-β signaling is the main regulator in cell migration and invasion. We then examined if TGF-β regulates EphB1 expression. We found that TGF-β enhanced the expression of EphB1 (Figure 4C). Transfection of Smad2 enhanced the expression of EphB1 (Figure 4D, 4E). We then performed a ChIP assay to elucidate if TGF-β-activated Smad2 can be recruited to EphB1 promoter. The putative Smad2/3 binding sites were shown in Figure 4F. ChIP assay performed on Smad2-transfected HEK293 cells revealed that Smad2 bound to EphB1 promoters (Figure 4G). 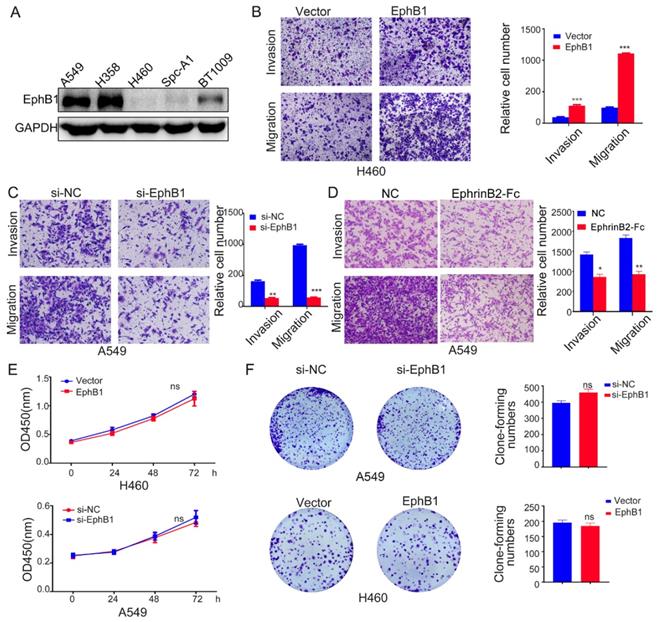 Ligand-dependent EphB1 signaling inhibits cancer cell migration and invasion through inducing the phosphorylation of EphB1. (A) Western blot was conducted to test the phosphorylation of EphB1 after transfection of EphB1 or treatment of EphrinB2-Fc; (B) Transwell assay was conducted to test the effect of EphB1 wt and mutant upon treatment of ligand EphrinB2-Fc on the migration and invasion of NSCLC cells. Number of cells were counted and shown in the column graph on the right of the corresponding pictures. Data are mean ± SD of three independent experiments. ** P < 0.01, *** P < 0.001, ns: no significance. 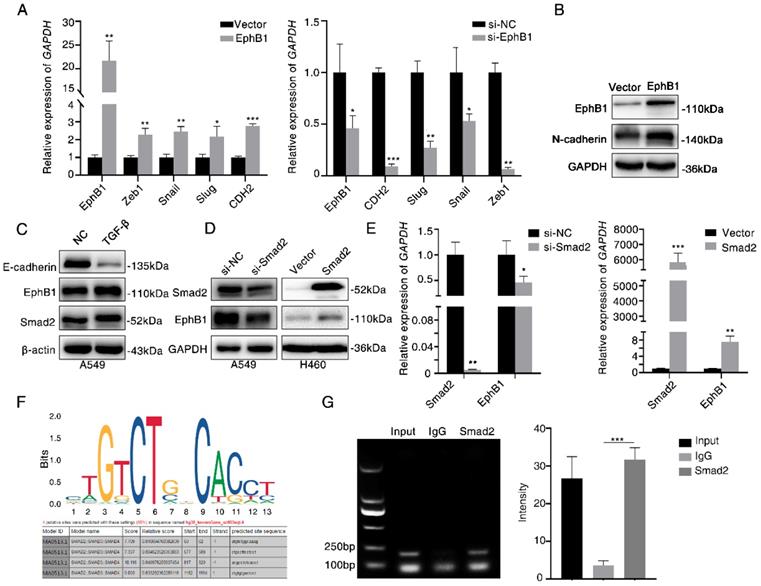 Eph family of receptor tyrosine kinases and their ligands mediate many physiologic and pathologic effects by a multiple signaling mode21. Ephrins and Eph tyrosine kinases initiate a unique bidirectional signal (forward and reverse signals) on both the receptor-expressing and ligand-expressing cells22,23. Furthermore, Eph receptors and ligand ephrins make their cis-interaction when the ligand and receptor are expressed in the same cells, while they interact in trans when ligand and receptor are expressed in different cells21. Cis interactions may be one of the strategies that adopted by cancer cells to escape the tumor suppressive effects of Eph receptor signaling induced by ephrins binding in trans24-26. Eph receptors and ephrins coexpressed in the same cells can attenuate receptor activation in trans by hindering the binding of ephrins and Eph receptors in trans27. The coexpression of Ephrin-A3 can block the ability of EphA2 and EphA3 to link ephrins in trans and become activated, while Ephrin-B2 can deter not only EphB4 but also EphA3 in the cancer cells27. Eph receptors are often upregulated in many types of cancer, although decreased Eph receptor levels were also been observed in certain types of cancer28. In contrast to the overexpression of Eph receptors in cancer, Eph receptor forward signaling that triggered by tyrosine phosphorylation inhibits tumor cell growth29,30. Higher expression of Ephrin-B2 is correlated with poor overall survival and disease-free survival in head and neck squamous cell carcinoma, pancreatic adenocarcinoma and bladder urothelial carcinoma31. The paradoxical functions of Eph are influenced by the cis- or trans- signaling. In this study, EphrinB2-Fc provided in trans mode can elicit EphB1 forward signaling, leading to reduced mobility and invasion. The overexpression of EphB1 without exogenous stimulation of Ephrin-B2, however, promotes mobility and invasion through upregulating EMT molecules.

In conclusion, the roles of EphB1 in cancer cell invasion and migration are context-dependent and involve the cis- or trans- interactions between receptor and ligands. EphB1 is transcriptionally regulated by Smad2 and mediates TGF-β signaling in a ligand-independent manner.

This work was supported by National Natural Science Foundation, China (grant number 81773147, 81472695 ); Key Research and Development Program of Hunan (2019SK2253); National Training and Research Base for Talents of principles of carcinogenesis foundation (111 project: 111-2-12).