Aims: To investigate the expression and clinical significance of methylenetetrahydrofolate dehydrogenase 1-like (MTHFD1L) in colorectal cancer (CRC) and its effect on CRC cells proliferation and migration.

Results: The results showed that the protein level of MTHFD1L in CRC was significantly higher than that in adjacent normal tissues (p<0.01). The expression of MTHFD1L in CRC was positively correlated with the degree of tumor differentiation, TNM classification, tumor invasion, lymph node metastasis, and distant metastasis. Survival analysis showed that CRC patients with high MTHFD1L expression had a lower 5-year survival rate and the expression of MTHFD1L was an independent adverse factor for the CRC prognosis (p<0.05). Down-regulation of MTHFD1L inhibited the proliferation and migration of DLD-1 and HCT116 CRC cell lines.

Conclusion: These findings reveal that MTHFD1L is highly expressive in CRC and associated with poor prognosis, and MTHDF1L can increase colorectal cancer cell proliferation and migration. Therefore, MTHFD1L may serve as a predictor and a potential therapeutic target for CRC.

According to the world health organization international cancer research center (IARC), the new morbidity and mortality rate of CRC ranks the third in the world1. Nowadays, surgery is the most important treatment for CRC, but tumor recurrence and metastasis after surgery are the main causes of death in patients with CRC. However, CRC lacks of new specific prognostic biomarkers and therapeutic targets. Therefore, it is urgent to search a key marker for CRC prognosis and therapy.

The folate cycle in cancer. 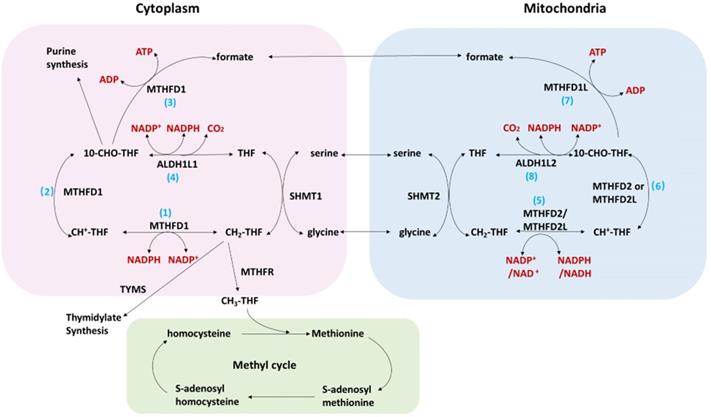 Folate cycling plays an important role in cellular physiological and pathological processes. The transport of one-carbon units (such as serine, glycine and formate) on the mitochondrial membrane enables the cytoplasm and mitochondrial compartment to be connected (figure 1). The connection between mitochondria and cytoplasm supports the unidirectional flow of one-carbon units from serine to formate, purine, pyrimidine, methionine, and NADPH. Studies2 have shown that a majority of one-carbon units (>75%) entering the cytoplasmic methionine cycle were derived from the mitochondria, which further confirms the connection between the two compartment. The one-carbon unit is exported to the cytoplasm in the form of formates and in the circulation of the two compartments produces many metabolites necessary for cell growth. The cytoplasmic folic acid cycling intermediate 10-CHO-THF can be used for purine synthesis, while CH2-THF can be used for the synthesis of pyrimidine. Methyltetrahydrofolate reductase (MTHFR) converts CH2-THF to CH3-THF which is connected to the methionine cycle. The one-carbon unit from CH3-THF is donated to the donor of S-adenosylmethionine for histone and DNA methylation. In addition, the folate cycle is an important source of NADPH3 which is a major cellular antioxidant. MTHFD1L is the enzyme catalyzing the last step of the mitochondrial compartment generating formate and could subsequently enter the cytoplasmic compartment. MTHFD1L therefore plays critical roles in folate cycle maintenance 4.

Folic acid metabolism is closely related to the development of various tumors5. The folate cycle is a complex metabolic network that controls nucleotide biosynthesis, methylation and redox maintenance. Among them, MTHFD2, SHMT2 and MTHFD1L are the core enzymes of the folate pathway5. Two key enzymes in the folate cycle, SHMT2 and MTHFD2, are associated with the occurrence and development of breast cancer, colorectal cancer and intrahepatic cholangiocarcinoma6-9. Methylenetetrahydrofolate dehydrogenase (NADP + dependent) 1 like (MTHFD1L) is the key enzyme in the last step of the folate cycle in the mitochondrial chamber and plays a key role in the folate pathway2. Previous studies have focused on its role in neural tube defects10, coronary artery disease11, depression12 and Alzheimer's disease13. Presently, several studies have shown that MTHFD1L played an important role in the development of liver cancer and esophageal cancer14, 15. However, there is no relative publications have proposed the role of MTHFD1L in CRC. In this study we firstly discussed the potential roles of MTHFD1L in CRC.

Envision two-step method was adopted for immunohistochemistry. Paraffin-embedded tissues were cut into 4 μm slices, and the dewaxed sections were immersed in antigen repair solution (pH6.0) for microwave repair. Endogenous peroxidases were inactivated with 3% hydrogen peroxide and then occluded with 5% BSA for 30 min. The slices were incubated with primary antibodies for MTHFD1L protein (1:400, Sigma, HPA029041) overnight at 4℃. The secondary antibody (DAKO) was added to the section and incubated at room temperature for 30 minutes. Human kidney tissue was used as positive control, while sections without antibody were used as negative control. Each slide was reviewed by two pathologists, who did not know the patient information. More than 5 high-power fields were observed in each slide, and the mean score of each case was the final score. MTHFD1L staining was considered as positive staining with obvious yellow or brown-yellow particles in the cytoplasm, and the staining result was evaluated by the positive cell rate and staining intensity. According to the proportion of the number of staining cells, the score was 0:0-10%, 1:10% - 25%, 2:25% - 50%, 3:50% -75%, and 4: > 75%. Staining intensity grading score: no staining (-), weak staining (1+), medium staining (2+), and strong staining (3+). And then, the two values were multiplied. Expression intensity was determined: 0-1 was negative, 2-4 was weak positive, 5-8 was moderate positive, and 9-12 was strong positive. Negative and weak positive were considered as negative or low expression, while positive and strong positive were considered as high expression.

Total cell and tissues lysates were extracted by RIPA buffer. Protein concentration were determined using the BCA protein assay kit. Protein were separated by 8% SDS-PAGE gel electrophoresis and transferred to PVDF membranes (Millipore). After blocking, the membrane was incubated with anti-MTHFD1L (1:500, sigma, HPA029041) and rabbit anti-GAPDH (1:5000, Abcam). the ImageJ analysis system was used for density analysis.

After transfection, cells were planked into 96-well plates (2000 cells per well) and 20ul MTT (Invitrogen) was added. After incubation for 4 hours, 200ul dimethyl sulfoxide was added and the absorbance value was measured at 490nm.Repeat for 6, 24, 48, 72 hours.

After transfection, the cells were plated on 6-well plates (500 cells per well) and cultured for 10-15 days until the visible clone was seen. The clones were stained with crystal violet and counted.

The cells were plated on 6-well plates, transfected with small interfering RNA, and cultured for 48 hours until the cells were overgrown. The micropipette tip was used to draw straight lines in the vertical petri dish, and then the culture medium of 1%FBS was added after washing with PBS. Pictures were taken under the microscope at 0h, 12h, 24h and 48h, respectively, and the healing area was calculated using ImageJ software. The healing rate was calculated by formula (1-(wound area at the time after wounding)/ (wound area at the time immediately after wounding) × 100).

MTHFD1L is highly expressed in CRC

The relationship between MTHFD1L expression and clinicopathological features in CRC

To analyze the clinical significance of MTHFD1L in CRC, the relationship between MTHFD1L expression and clinicopathological characteristics was performed using chi-square test. The result showed that the expression of MTHFD1L in colon cancer tissues was not significantly correlated with patient's gender, age, tumor size, but positively correlated with the degree of tumor differentiation, TMN classification, tumor invasion depth, lymph node metastasis, and distant metastasis (p<0.05 for all; table 1).

Correlation between MTHFD1L and clinicopathologic parameters.

The relationship between MTHFD1L expression and prognosis in CRC

MTHFD1L is overexpressed in CRC and is associated with poor prognosis. A. Western blot was used to detect the expression of MTHFD1L in colorectal cancer and para-cancerous tissues. N: The Pairing normal tissue; T: The cancerous tissue. B. The relative expression of MTHFD1L protein in CRC tissues (0.9726 ± 0.6942) was higher than that in non-tumor tissues (0.6859±0.4748). 59 case Western blot bands were analyzed using Image J software. The result was the ratio of MTHFD1L to GAPDH. * p < 0.05. C. Immunohistochemical staining of MTHFD1L protein on CRC tissues and the corresponding non-tumor tissues. scale bars = 100μm. D. Kaplan-Meier analyses of overall survival in 176 CRC patients based on MTHFD1L expression level of CRC tissues. 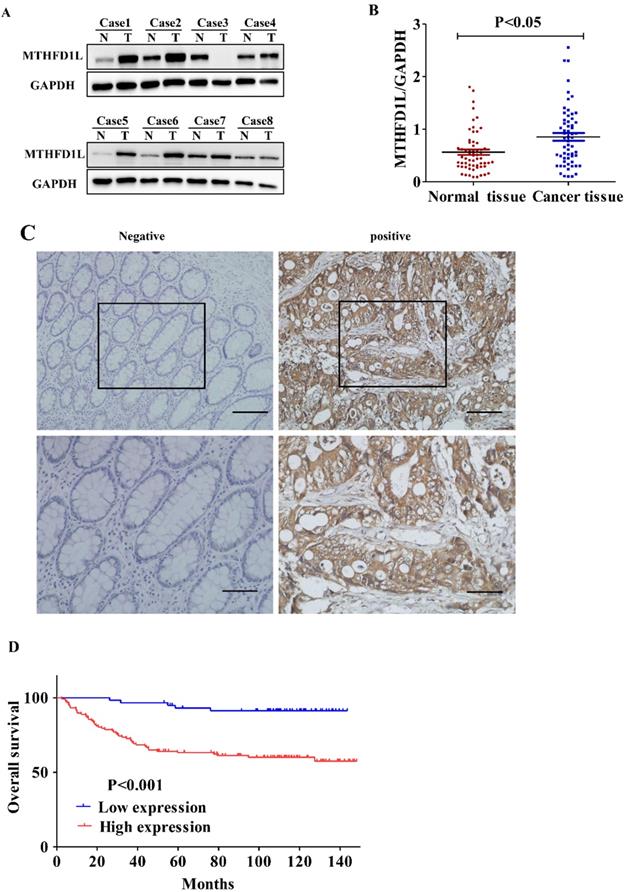 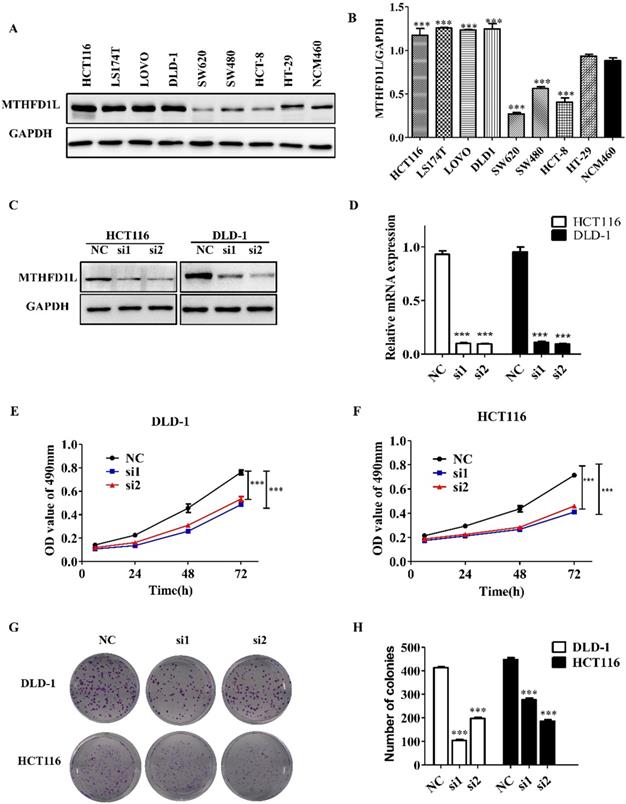 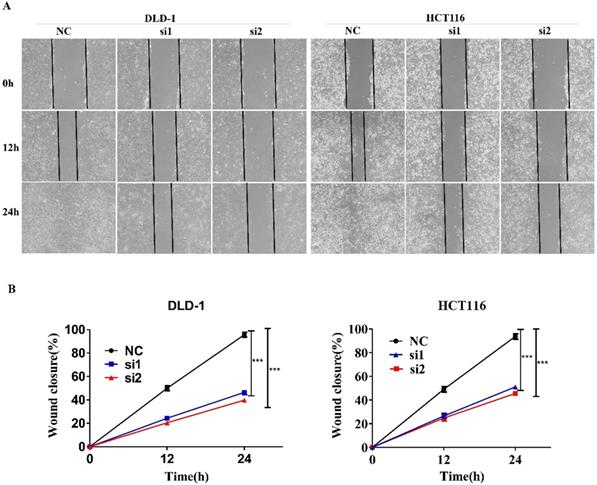 MTT assay and plate clonal formation assay were used to detect the effect of reducing MTHFD1L expression on the proliferation of DLD-1 and HCT116 cells. MTT assay showed that, compared with the control group, the growth of cells with low MTHFD1L expression was significantly affected (P < 0.05, figure 3, E and F).

Similarly, the results of plate cloning formation experiment showed that, compared with the control group, the size and number of cell clones with low expression of MTHFD1L were significantly reduced (P < 0.05, figure 3, G and H).

Methyltetrahydrofolate dehydrogenase (NADP + dependent)1 like (MTHFD1L) is a single-functional formyltetrahydrofolate synthase encoded by nuclear MTHFD1L on human chromosome 6. MTHFD1L is a key enzyme16 involved in the last step of the mitochondrial chamber reaction in the folate cycle, which promotes the production of formate. After entering the cytoplasm, formate can be used as a source of one-carbon unit in the folate cycle17, promoting the biosynthesis of nucleotides and methylation and the maintaining the redox state18. MTHFD1L plays a crucial role in maintaining folate circulation. Our study showed that MTHFD1L was significantly up-regulated in CRC and could be used as an independent indicator of poor prognosis. Down-regulation of MTHFD1L was associated with decreased proliferation and migration of CRC cells. Summary, these results indicate the key role of MTHFD1L in the progression of CRC, emphasize the prognostic value of MTHFD1L in CRC.

In cancer cells, increasing the ability to fight oxidative stress is an important step in tumor progression21. Therefore, the maintenance of redox homeostasis can mainly offset the increase of reactive oxygen species (ROS) level by improving the antioxidant defense22. The maintenance of redox homeostasis is determined by the balance between oxidant and antioxidant levels. The latter is dependent on NADPH production, the basic role of NADPH is to provide electrons so that the redox reaction can tolerate ROS and thus act as an antioxidant defense22. Controlling NADPH production increases the ability of cancer cells to tolerate oxidative stress, which promotes tumor development21, 23, 24. The folate cycle is also closely related to NADPH production. MTHFD1L has been shown to increase the ability to resist oxidative stress by promoting NADPH production in hepatocellular cancer14. Down-regulating the expression of MTHFD1L made the liver cancer cells sensitive to sorafenib. Inhibition of folate pathway can weaken the anti-oxidative stress ability of tumor cells and promote the metastasis of melanoma24. Activation of the Kras25 and c-Myc26 pathways in colorectal cancer is closely related to folate metabolism. Another key enzyme in the folate cycle, MTHFD2, is transcriptionally activated by c-Myc downstream of Kras, and MTHFD2 promotes colorectal cancer7 metastasis by increasing anti-oxidative stress. It is hypothesized that MTHFD1L promotes tumor metastasis by increasing antioxidant stress. Our results showed that MTHFD1L could promote the migration ability of tumor. It can be speculated that MTHFD1L can promote the metastasis of colorectal cancer by increasing the ability of anti-oxidative stress. However, how MTHFD1L controls NADPH homeostasis remains unclear. Next, we will further study the mechanism of MTHFD1L promoting metastasis of colorectal cancer.

In summary, this study indicated that MTHFD1L is highly expressed in colorectal cancer and is associated with poor prognosis. MTHFD1L promotes proliferation and metastasis of colorectal cancer cells, potentially in relation to the biosynthesis of nucleotide and supply of NADPH in one-carbon metabolism. MTHFD1L may be an important prognostic indicator and molecular target for CRC.