Background: CDK12 is a potential therapeutic target in papillary thyroid cancer that regulates the c-myc/β-catenin pathway.

Objective: We aimed to explore the specific mechanism of CDK12 in papillary thyroid cancer and provide a new target of cancer therapy.

Methods: RT-qPCR was used to determine the CDK12 mRNA expression level. An IHC assay was performed to detect the tissue expression of CDK12. Then, we downregulated CDK12 expression in the thyroid cancer cell lines TPC-1-shCDK12 and KAT-5-shCDK12. CCK8 assays, colony formation assays, and animal xenograft models were used to evaluate the effect of CDK12 on tumorigenesis. Transwell assays and in vivo metastasis models were used to observe whether CDK12 can promote cancer metastasis. Western blotting further confirmed the mechanism of CDK12 in papillary thyroid cancer through the c-myc/β-catenin pathway.

c-myc is a classical oncogene that can affect the progression of many cancers [17-20]. It was determined that c-myc is the downstream target of wnt/β-catenin. c-myc regulates cell proliferation, differentiation, angiogenesis, and apoptosis[21, 22]. c-Myc translation is activated by β-catenin. β-cateninis critical in many cancers and participates in a broad range of cancer processes, including stem cell self-renewal, stemness-maintaining progression, and tumorigenesis[23, 24]. The c-myc pathway is significantly correlated with poor prognosis, increased possibility of breast-to-lung metastasis and reduced overall survival [25, 26]. Herein, we performed this study to investigate the function of CDK12 and its underlying mechanism in papillary thyroid cancer progression. Our data demonstrated that CDK12 promoted cancer proliferation, migration and metastasis through the c-myc/β-catenin pathway. CDK12 may be a potential target in PTC therapy.

Thirty pairs of clinical samples and adjacent normal tissues were collected from patients who were diagnosed with PTC and underwent surgery at Xiangya Hospital, Central South University from 2015 to 2017, aged 22-60 years old. The sectioned cancerous tissues and paired normal mammary tissues were immediately removed and stored in RNAlater (Ambion), and the RNA was extracted with Trizol (Invitrogen, Carlsbad, CA, USA) and then frozen in liquid nitrogen at -80°C. All patients provided informed consent, and this study was approved by the Medical Ethics Committee of Xiangya Hospital, Central South University.

The adherent cancer cells were lysed and 500 sh-CDK12 and sh-CTR cancer cells were seeded into a 96-well plate. The plate was incubated for 24, 48, 72, and 96 h in the incubator. Then, 10 μl of CCK-8 solution was added to each well of the plate. The plate was incubated for 1 - 4 h in the incubator. The absorbance was measured at 450 nm using a microplate reader (Bio-Tek EPOCH2, Vermont, USA).

The cells were washed twice with 1x PBS and trypsinized. Then, a volume of 10% FBS in DMEM equal to the volume of trypsin was added to inactivate the trypsin. The cells were gently centrifuged. The cells were resuspended in DMEM and counted. A total of 1 x 105 cells were added into the transwell compartments. And the mitomycin was added in to the culture to avoid the effect of cancer cell's proliferation. The cells were incubated in the transwell plate at 37 °C and 5% CO2 for 24 h. The upper layer of cells was swabbed. The lower side of the insert filter was rinsed in4% formaldehyde solution for 10 min. Next, the cells were stained with 1% crystal violet for 15 min. The inserts were washed with PBS 4 times. The insert membrane was dried. The number of cells on the lower side of the filter was counted under a NIKON ECLIPSE 80imicroscope (Nikon Instruments, NY, USA). Each migration condition was tested in triplicate.

In brief, 1×107sh-CDK12, sh-CTR TPC-1 or KAT-5 cells were subcutaneously injected into the flanks of nude mice from Charles River (Beijing, China). Each group contained 5 nude mice. Twenty-eight days later, the mice were euthanized and then the tumor volumes were analyzed. The animal research was approved by the ethical committee of Xiangya Hospital, Central South University.

A total of 1×105 sh-CDK12, sh-CTR TPC-1 or KAT-5 cells were injected into nude mice through the tail vein. 5 nude mice were facilitated for each group. Thirty days later, all mice were anesthetized, and the lungs were extracted. The metastatic nodules were counted by eye and then stored in 4% formaldehyde solution for further study.

All data are reported as the mean ± SD. The paired t-test was used to evaluate the differences of the tumor tissue and paired adjacent normal tissue. The differences between two groups were determined by Student's two-tailed unpaired t-test. A p value <0.05 was regarded as statistically significant.

To study the role of CDK12 in PTC, we detected the expression of CDK12 in clinical PTC specimens. We found that CDK12 expression was significantly higher in tumors than in normal tissues (Figure 1A). This result indicated that CDK12 may play an important role in papillary thyroid cancer progression. Then, we detected CDK12 mRNA expression in several common thyroid cell lines. PTC cell lines (TPC-1, NPA87 and KAT-5) had prominently higher CDK12 levels than the normal cell line Nthy-ori3-1. Additionally, the CDK12 mRNA expression levels of TPC-1 and KAT-5 cells were the highest among the papillary thyroid cancer cell lines (Figure 1B). These two cancer cell lines were used for subsequent experiments. 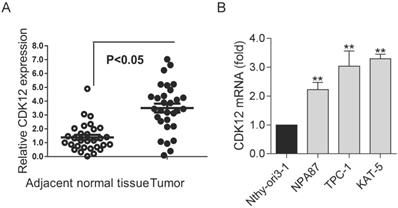 To confirm the function of CDK12 in tumorigenicity, we inhibited CDK12 mRNA expression in the TPC-1 and KAT-5 cancer cell lines (Figure 2A). The CCK8 assay results demonstrated that CDK12 downregulation inhibited cancer cell proliferation (Figure 2B). Animal research was performed to further confirm the role of CDK12 carcinogenesis in vivo. CDK12 expression was knocked down in the PTC-1 and KAT-5 cell lines and the cells were then injected into nude mice in situ. After 4 weeks, the mice were sacrificed to harvest the tumors, and the tumor volumes were measured. CDK12 inhibition resulted in tumors that were obviously smaller than those in the control group (Figure 2C-D). These results demonstrated that CDK12 promotes papillary thyroid cancer proliferation both in vivo and in vitro. Hence, CDK12 may play an important role in papillary thyroid cancer progression.

CDK12 promotes PTC progression in vivo and in vitro. (A): qRT-PCR was used to determine the mRNA expression of CDK12. TPC-1 and KAT-5 cells had effectively decreased mRNA expression of CDK12. (B): A CCK-8 assay was used to detect the cell proliferation ability of TPC-1-sh-CDK12 and KAT-5-sh-CDK12 cells. (C): Representative images of xenografts and the tumor weight statistics in nude mice. The weights of the tumors are shown in the right panel. All results are expressed as the mean±SD of three independent experiments. **, P<0.01. (D): the growth curve of xenografts, TPC-1(left), KAT-5(right), ***, P<0.001, ****, P<0.0001. 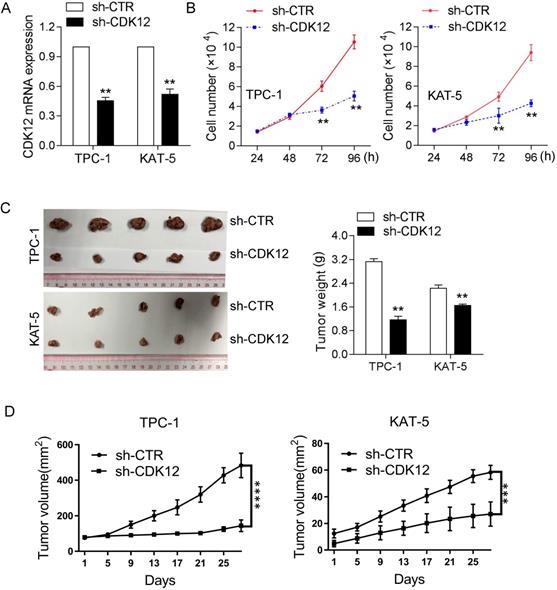 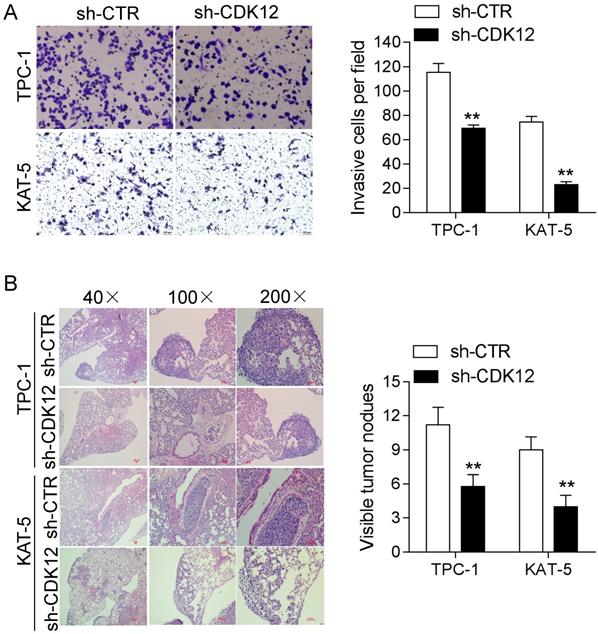 The c-myc/β-catenin pathway is a classical signaling pathway in cancer pathogenesis and is involved in cell stemness maintenance. Slug and snail were reported downstream of β-catenin and c-myc. The Western blot results revealed that CDK12 is closely related to the c-myc/β-catenin pathway (Figure 4). The proteins in the Wnt pathway, such as Wnt-1, β-catenin, c-myc, snail, and slug, were downregulated when CDK12 was knocked down. As a well-known stem cell marker, the expression of CD44 also decreased when CDK12 expression was inhibited. This indicates that CDK12 plays a vital role in the stemness of PTC cells.

CDK12 acts as a cyclin-dependent kinase (CDK) that assembles with cyclin K to play a key role in cell cycle transition [28]. CDK12 maintains genomic stability byrepairing DNA damage. The loss of CDK12 can lead to carcinogenesis [29]. In this paper, we explored whether CDK12 is upregulated in PTC clinical specimens. The CDK12 expression in PTC cell lines further confirmed the association between CDK12 and PTC carcinogenesis. Our data demonstrated that inhibiting CDK12 expression in vivo and in vitro significantly suppressed cancer cell proliferation and tumor weights.

Metastasis is a vital challenge in cancer therapy, and it enormously threatens patient lives. Decreasing the occurrence of metastasis can effectively prolong patient survival time and reduce suffering [30]. The transwell and metastasis assay results showed that CDK12 reduced cancer cell migration and the number of lung metastatic nodules. These results indicate that CDK12 can be a potential target in PTC therapy.

The c-myc/β-catenin pathway is an important pathway in tumorigenesis. The major Wnt pathway signals depend on β-catenin. Wnt activates the receptors on the membrane surface. Then, β-catenin is activated in the cytoplasm and transferred into the nucleus. β-catenin in the nucleus regulates the expression of target genes, such as c-myc [31]. Slug and Snail are the downstream targets of c-myc. Slug and Snail regulate cell adhesion ability and play important roles in the epithelial-to-mesenchymal transition (EMT) [32-34]. Through a silicon assay, we found that CDK12 participated in the c-myc/β-catenin pathway to promote tumor progression. Western blotting confirmed that CDK12 participates in the wnt pathway to promote PTC and EMT progression. Our results help to complete the map of the c-myc/β-catenin pathway and provide a new potential target for PTC therapy.

CD44 is a well-known stemness marker. Cancer cell stemness is regarded as the cause of cancer relapse. CSCs can self-renew and maintain the ability to differentiate into other cancer types that display higher drug-resistance and malignant features [35]. The decreased expression of CD44 resulting from CDK12 inhibition revealed that CDK12 may affect the stemness of PTC cells. 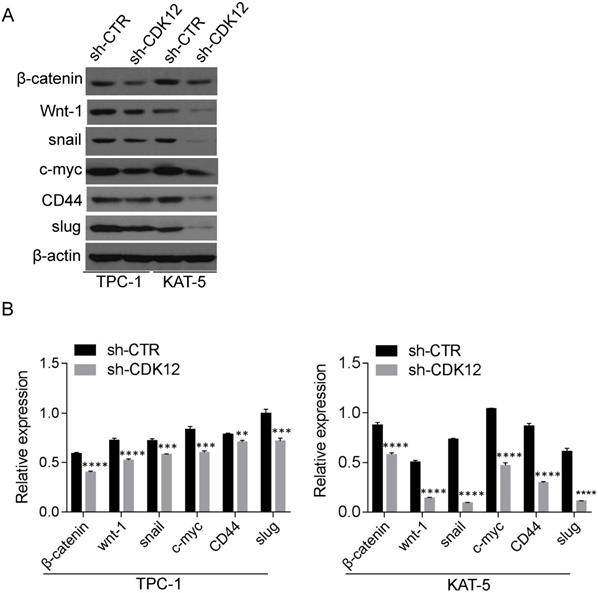 In summary, CDK12 can inhibit cancer progression and metastasis by affecting cell proliferation and migration and inhibiting c-myc/β-catenin pathway expression and cancer stemness. CDK12 might become a potential biomarker or therapy target of PTC.

This work was supported by funds from the Natural Science Foundation of Hunan Province (2019JJ40500).