Tumor cells are often exposed to intrinsic and external factors that alter protein homeostasis and thus induce endoplasmic reticulum stress. To cope with endoplasmic reticulum (ER) stress, the ER and nucleus communicate with each other, and the unfolded protein response (UPR) is activated [6]. Inositol requiring enzyme 1 alpha (referred to as IRE1α here after, encoded by gene ern1) is one of the three major receptors in ER stress response. It is the most conserved receptor on the endoplasmic reticulum membrane [7, 8]. IRE1α has both ribonuclease activity and kinase activity as reported [9]. Under ER stress, IRE1α is activated [9]. Activated IRE1α generates a spliced mRNA by specifically excising the 26 bp of precursor XBP1 mRNA [10, 11]. The spliced XBP1 encodes an active transcription factor (XBP1s), which promotes the transcription of target genes [8]. The IRE1α-XBP1s signaling pathway is activated in many malignant tumors. Compared with normal tissues, melanoma tissues have significantly enhanced the protein levels of XBP1s, and IRE1α or XBP1s overexpression could promote melanoma cell proliferation [12]. The activation of IRE1α-XBP1s pathway correlates with poor patient survival in lung cancer and TNBC patients [13, 14]. As a survival mechanism, IRE1α-XBP1s plays important roles in chemoresistance and radioresistance [15, 16]. Studies have shown that the IRE1α-XBP1s can hinder the development of protective anti-tumor immunity by regulating the function of myeloid cells in the tumor microenvironment [17]. Hence, IRE1α-XBP1s pathway can be a potential treatment target in some malignant tumors [18, 19].

XBP1s has been reported to be overexpressed in colon cancer cells, whereas it was unreactive in the normal colon epithelial cells [20].Overexpression of IRE1α or induction of XBP1s could both promote colorectal cancer cell proliferation [21, 22]. But the correlation of EGFR signaling and IRE1α-XBP1s activation remains unknown. In this study, we investigate the activation of IRE1α-XBP1s signaling in colorectal cancer, and demonstrate that EGFR signaling activates IRE1α through EGFR-MEK-ERK pathway. When combined with oxaliplatin, cetuximab could inhibit the IRE1α-XBP1s activation induced by oxaliplatin and improved the therapy efficacy. These results reveal a new mechanism of EGFR targeting in the treatment of colorectal cancer.

TRizol (Catalog number 15596-026, from Invitrogen) was used to extract total RNA, then quantify and reverse transcription of mRNA was conducted. The reverse transcription reagent PrimeScript™ RT Master Mix (Perfect Real Time) was purchased from TAKARA, catalogue number (RR036A). The primers sequ-ences are listed as follow (actin-F'GCGAGAAGATGACCCAGATC, actin-R'CCAGTGGTACGGCCAGAGG; XBP1s-F'CTGAGTCCGCAGCAGGTG,XBP1s-R'TCCAAGTTGTCCAGAATGCC).Actin was used as an internal control. All reactions were performed at least 3 times and the fold change of gene expression was determined by using the 2-ΔΔCt method.

Immunoprecipitation kit of ProteintechTM (Catalog number: KIP-2) was used to conduct coimmunoprecipitation. Cells were treated with 50ng/ml EGF for 30min before harvest and then washed twice with ice-cold PBS. According to the manufacturer's instructions, total cell lysates were incubated respectively with anti-IRE1α antibody and anti-ERK1/2 antibody overnight at 4°C. And then the protein complexes were precipitated by the addition of protein A/G agrose beads. Then the beads were washed 5 times by wash buffer. Finally, the precipitations were eluted and analyzed by Western blotting.

For clonogenic survival assay, cells were seeded in six-well plates at densities of 500 cells per well and cultured with or without EGF or inhibitors, as indicated. Two weeks later, all cells were fixed in 4% formaldehyde and stained with 0.1% crystal violet (in water).

Cell counting kit-8 was applied to perform cell viability analysis assay. 1.5 thousand cells of SW480 each well was seeded in 96 wells plates. Cells were continuously treated with EGF (50ng/ml) or MKC8866 (10μM) after cell adherence, and cell viability was measured by CCK-8 every day for 3 days.

This study was conducted in HCT116 cell line. Cells were cultured on coverslips in 24-well plate and treated with cetuximab (12.5μg/ml) after 24h, then immunocytochemistry assay was conducted to detect proteins of p-EGFR and p-IRE1α. After 3 times wash with PBS, precooled methanol was used for cell fixation, which treated cells for 10min. Wash twice with PBS and disrupt cell membrane by 0.2% polyoxymethylene. Then wash twice with PBS, and block with 5% BSA for one hour at room temperature. Next, primary antibodies (1:1000) were incubated at 4°C overnight. After twice wash with PBST and twice wash with PBS, HRP-labeled IgG was incubated at 37°C for 30 min. Stain with DAB, then wash with PBST and twice wash with PBS. Nuclei were stained by hematoxylin and cover the coverslips on glass slides. Primary antibodies were showed below: p-EGFR (Cell Signaling Technology, 3777S), p-IRE1α (abcam, ab48187). Secondary antibody (PV-9000), DAB (ZLI-9018) were purchased from OriGene.

Data in this article are presented as mean and standard error of mean. The treatment effects in each group were compared by one-way ANOVA, and differences between groups were considered significant when P<0.05. 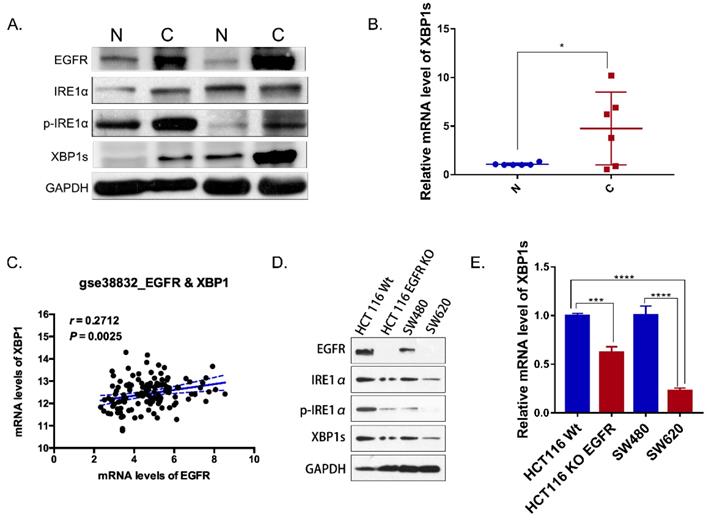 In OSCC cells, SiEGFR inhibited IRE1α-XBP1s-GRP78 pathways [16]. In addition, inhibition of EGFR could inhibit HG-induced ER stress in mesangial cell [24]. To investigate whether EGFR signaling pathway is associated with IRE1α activation in colorectal cancer, SW480 cells were treated with human epidermal growth factor EGF (50ng/ml). After EGF stimulation for 30 min, EGFR was phosphorylated, and the phosphorylated IRE1α also increased (Figure 2A). As a result, the spliced XBP1s was also upregulated (Figure 2B). Similar result was obtained in HCT116 cells (Figure 2C). When EGFR was overexpressed in SW480 and HCT116 cells, phosphorylated EGFR increased, accompany by upregulation of phosphorylated IRE1α and XBP1s (Figure 2D,2E).

In order to verify this result, EGFR was knocked down by siRNA. The results showed that IRE1α-XBP1s signaling pathway was downregulated after EGFR knocked-down (Figure 2F,2G). The monoclonal antibody cetuximab and the small molecule inhibitor gefitinib were also used to inhibit EGFR activity in SW480 and HCT116 cells. Cetuximab and gefitinib both inhibited EGFR phosphorylation, and p-IRE1α and XBP1s proteins were reduced after treatment (Figure 2H,2I). Real time PCR also confirmed the downregulation of splicing XBP1s mRNA in SW480 (Figure 2J). Immunocytochemistry result also showed that cetuximab treatment reduced the phosphorylation of EGFR and IRE1α (Figure 2K). Moreover, cetuximab could decrease the XBP1s upregulation caused by EGFR overexpression (Figure 2L). We also determined whether the cetuximab could influence the spliced of XBP1 by IRE1α.We found that the overexpression of IRE1α increased XBP1s, and cetuximab could partially reverse the splicing effect (Figure 2M). Those results indicated that EGFR activation could activate the IRE1α-XBP1s signaling pathway.

To elucidate the mechanism by which EGFR signaling regulates IRE1α activity, the downstream signaling pathways activated by EGFR were examined. As shown in Figure 3A, only the phosphorylation of ERK was positively correlated with the activation of EGFR in SW480 cells. When EGFR was knocked-down, p-EGFR, p-ERK and p-IRE1α were significantly reduced in HCT116 (Figure 3B), and there is also this phenomenon when treated with cetuximab, in HCT116 cell line (Figure 3C). Then the inhibitor of MEK, PD0325901 was use to inhibit the activation of ERK. With the treatment of PD0325901, the phosphorylation level of ERK decreased, and HCT116 cells showed IRE1α-XBP1s signaling pathway downregulation (Figure 3D). Also, both MEK inhibitor PD0325901and ERK Inhibitor SCH8477 could effectively inhibit the phosphorylation of IRE1α and XBP1s protein level (Figure 3E,3F). And when treated with Ravoxertinib, another inhibitor of ERK, the splicing XBP1s was also significantly inhibited in HCT116 and SW480 cells (Figure 3G,3H). Further CO-IP experiment showed that ERK and IRE1α were physically interacted (Figure 3I,3J). Altogether, these results suggested that EGFR signaling could regulates IRE1α activity possibly through EGFR-MEK-ERK pathway.

In order to verify the effect of IRE1α-XBP1s on EGFR driven cell proliferation, IRE1α RNase activity was blocked by MKC8866, an IRE1α RNase inhibitor. With a sustaining stimulation of EGF (50ng/ml), the proliferation rate of SW480 cells accelerated, and treatment with MKC8866 (10μM) decreased the proliferation rate (Figure 4A). The clonogenic survival assay, also showed that MKC8866 could effectively inhibit colony formation of SW480 cells (Figure 4B). The result indicated that IRE1α-XBP1s pathway might participate in EGFR driven tumor cell proliferation.

As an important survival mechanism of cells, UPR response plays an important role in the resistance of tumor cells to chemotherapy, which often causes chemoresistance due to the activation of IRE1α, leading to poor prognosis[15].To determine whether oxaliplatin could activate IRE1α RNase activity, HCT116 and SW480 cells were treated with oxaliplatin of different concentrations. Low dose oxaliplatin increased IRE1α RNase activity as demonstrated by an increase in levels of spliced XBP1s (Figure 5A,5B). Moreover, addition of MKC8866 was sufficient to completely block oxaliplatin-induced expression of XBP1s. Further, combination of cetuximab or ERK inhibitors with oxaliplatin could suppress the splice level of XBP1 (Figure 5C,5D). Western Blot result also showed that the phosphorylation level of IRE1α and XBP1s were upregulated by oxaliplatin and inhibited by EGFR inhibitor or ERK inhibitor (Figure 5E,5F). Collectively, cetuximab can decreased the ERS caused by oxaliplatin. Clonogenic survival assay showed that the combination of cetuximab could enhance the effectiveness of oxaliplatin (Figure 5G). To test the effects of the chemosensitivity in vivo, HCT116 cells were subcutaneously injected into nude mice. As shown in Figure 5H, tumor volumes and tumor weights were significantly inhibited in the group treated with oxaliplatin in combination with cetuximab, STF083010, an inhibitor of IRE1α (Figure 5H,5I). But significant body weight loss was only observed in the mice treated with STF083010 (Figure 5J). Taken together, Inhibition of EGFR signaling could enhance the effectiveness of oxaliplatin via inhibition of IRE1α-XBP1s pathway.

Due to nutritional deficiencies, hypoxia, high metabolic requirements, and oxidative stress in tumors, the ER folding function is disrupted and ER stress is generated. ER stress and UPR activation are documented in the development of many cancer types [25]. IRE1α-XBP1s pathway is activated in many kinds of cancers, but there are few reports on the status of IRE1α-XBP1s in colon cancer. In colorectal cancer XBP1s mRNA has been reported to be overexpressed in colon cancer cells [20]. Immunohistochemical staining result showed the high expression of total IRE1α indicated shorter overall survival time of CRC patients [22]. In this study, we detected the phosphorylation of IRE1α and found the phosphorylation level of IRE1α in tumor tissue was higher than tumor associated normal tissue. 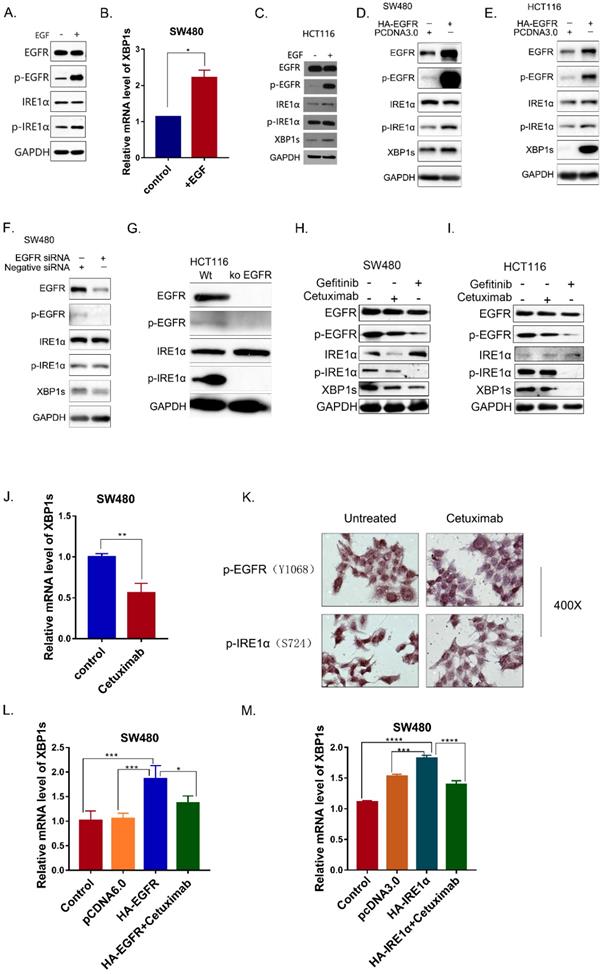 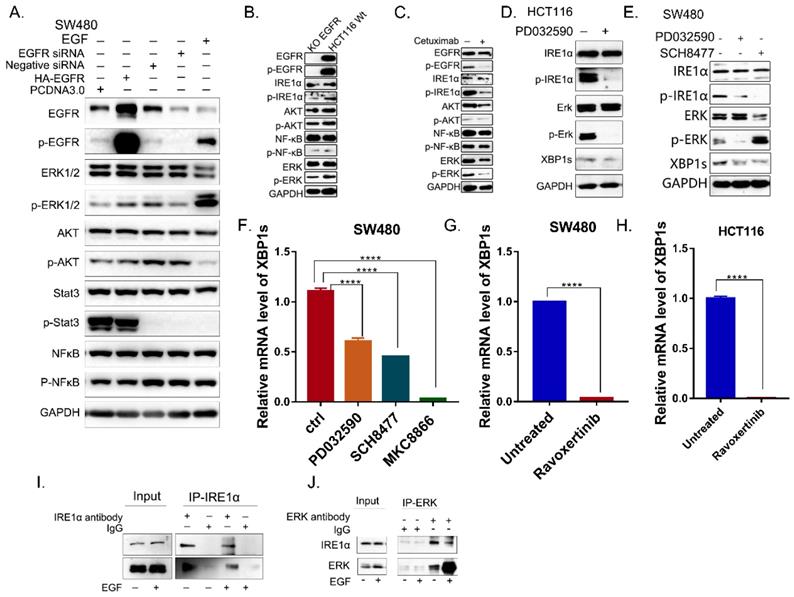 Our results also indicated that IRE1α-XBP1s activation was correlated with EGFR expression in colorectal cancer. Some previous results also confirmed the correlation. EGF could rapidly increase splicing of XBP1s mRNA in breast cancer cells, and pre-treating cells with the EGFR inhibitor, erlotinib, blocked EGF-induction of spliced XBP1 mRNA [28]. In OSCC cell lines, EGFR silencing reduced the phospho-IRE1α levels as well as splicing of XBP1s [16]. Then, we explored the detailed mechanism. EGFR activates the downstream kinase cascade and promotes colorectal cancer progression through the increased cell proliferation, prolonged survival, angiogenesis, anti-apoptosis, invasion, and metastasis [29]. Previous reports have showed the activation of ERK was necessary for IRE1α-XBP1s activation. Inhibition of MEK or knockdown of ERK1/2 could prevent tunicamycin-induced IRE1α activation [30, 31]. We found that EGFR signaling activated IRE1α through EGFR-MEK-ERK pathway, inhibition of MEK or ERK could reduce the IRE1α phosphorylation and XBP1s expression in colorectal cancer cell lines. We have proved a physical interaction between ERK and IRE1α through coimmunoprecipitation, and ERK might directly phosphorylate IRE1α upon EGFR activation. Furthermore, when IRE1α RNase activity was blocked by MKC8866, EGFR driving cell proliferation was inhibited. Taken together, EGFR signaling might promote cancer progression partially through activation of IRE1α-XBP1s pathway.

In summary, we demonstrated that targeting EGFR could inhibit the activation of IRE1α-XBP1s signaling through EGFR-MEK-ERK pathway. Combined with cetuximab could enhance the effectiveness of oxaliplatin via inhibition of IRE1α-XBP1s pathway. Our findings indicate IRE1α-XBP1s signaling is a potential therapeutic target and provides strong evidence to support the use of EGFR targeting in combination with chemotherapeutics for the treatment of colorectal cancer. 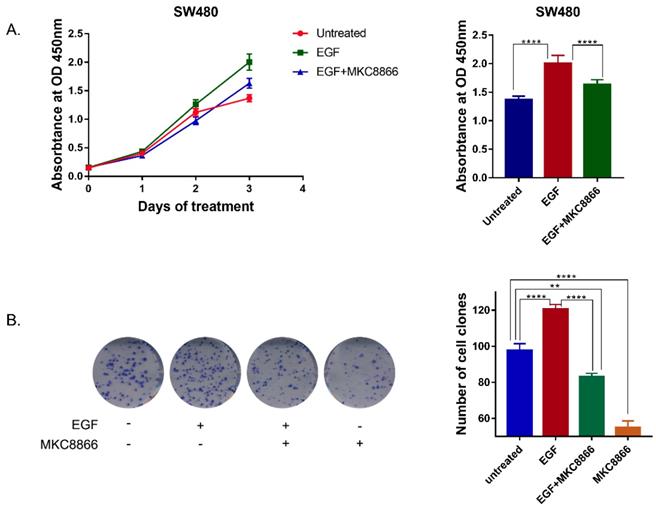 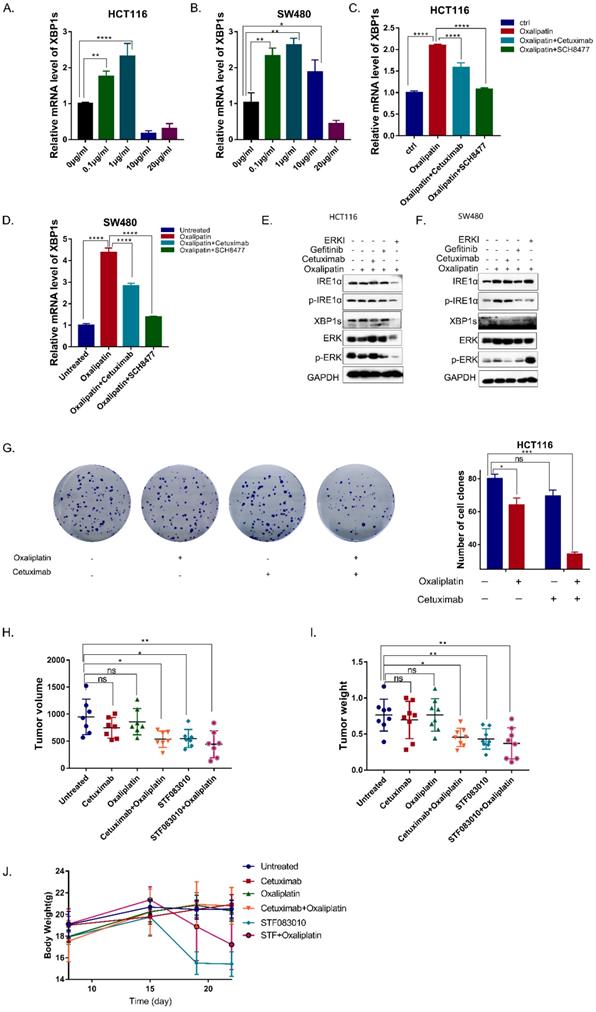