Increasing evidence has demonstrated that changes in alternative splicing (AS) events are closely associated with the initiation and progression of cancer. However, the concrete role of AS in tumorigenesis of head and neck squamous cell carcinoma (HNSCC) is poorly known. In this study, we aimed to investigate the AS profile in HNSCC, and build up a robust AS-based prognostic signature for HNSCC. Our results revealed a total of 4068 overall survival (OS) associated AS events in the TCGA HNSCC cohort. The whole TCGA HNSCC cohort was randomly divided into discovery cohort and validation cohort. A prognostic signature including five AS events was developed with the discovery cohort based on the most significant OS-associated AS events. Then it was further successfully validated in the validation cohort. The AS-based risk signature was an independent prognostic indicator in both discovery cohort and validation cohort. This prognostic signature-based nomogram model showed excellent performance for predicting the OS of HNSCC. Splicing network analysis have identified the most correlated splicing factor-AS network in HNSCC. Collectively, we have constructed a robust AS-based prognostic signature which might contribute to improve the clinical outcome of HNSCC.

Head and neck cancer (HNC) is the sixth most common cancer around the world, and squamous cell carcinoma (HNSCC) accounts for more than 90% of all HNC cases [1, 2]. It represents a leading reason for cancer-attributable morbidity and mortality, with a global incidence of 550 000 cases and 380 000 deaths annually [3]. Currently the selection of therapeutic methodologies mainly depends upon the tumor, node, metastasis (TNM) staging system, which is widely used for the predicting the prognosis of HNSCC. However, it is not reliable and accurate enough as many patients at the same TNM stage might have distinct clinical outcome. Therefore, these limitations have prompted a search for novel biomarkers which can precisely predict the overall survival (OS) of HNSCC.

Alternative splicing (AS) is a critical factor for genome complexity and proteomic diversity [4]. The abnormal patterns of AS are frequently found in cancer and starting to be recognized as an important player in tumor initiation and progression [5-7]. For instance, the level of DOCK5 variant was notably increased in HNSCC. Overexpression of DOCK5 variant promoted the malignant behaviors of cancer cells, and vice versa. In addition, DOCK5 variant upregulation was closely associated with the unfavorable prognosis of HNSCC [8]. The CD44 variant 4 and variant 6 were exclusively abundant in HNSCC, while variant 1 and variant 2 were found in normal oral keratinocytes. In addition, higher levels of variant 4 and variant 6 were especially detected in HNSCC cases with advanced stage or the cells with aggressive potential, suggesting that CD44 variant 4 and variant 6 might be important for HNSCC progression and metastasis [9].

The Cancer Genome Atlas (TCGA) and TCGASpliceSeq database are important bioinformatics platforms which provide valuable resources for data analysis. Previously we have constructed robust molecular signatures for predicting the prognosis of oral squamous cell carcinoma or oral precancerous lesions with mRNAs or microRNAs based on the TCGA database [10, 11]. However, whether the alterations in the AS profile could be used to predict the clinical outcome of HNSCC remained unclear. In this study, we profiled the AS pattern in TCGA HNSCC cohort. Then a AS-based prognostic signature was developed based on the discovery cohort, and further validated with the validation cohort. More importantly, this prognostic signature-based nomogram model predicted the OS of HNSCC with extremely high accuracy, indicating it is a powerful prognostic tool for precision oncology and personalized medicine.

The RNA-seq transcriptome data and the clinical information of TGCA HNSCC dataset were obtained from The National Cancer Institute Genomic Data Commons (NCI-GDC) (https://gdc.cancer.gov/). The alternative splicing data of TCGA HNSCC cohort was downloaded from TCGASpliceSeq database (https://bioinformatics.mdanderson.org /TCGASpliceSeq/). The Percent Spliced In (PSI) value, ranging from 0 to 100 (%), was used for quantifying AS events.

AS profile identification and survival analysis

Upset plot was drawn to demonstrate the seven patterns of AS events (alternate acceptor site (AA), alternate donor site (AD), alternate promoter (AP), alternate terminator (AT), exon skip (ES), mutually exclusive exons (ME), and retained intron (RI)) in TCGA HNSCC cohort with UpsetR package in R. For each type of AS events, univariate Cox proportional hazard regression analysis was used to identify the OS-associated AS events. A prognostic signature was constructed for each type of AS events using the top 20 most significant OS-associated AS events in each corresponding pattern of AS events. Then the least absolute shrinkage and selection operator (LASSO) Cox regression model was used to select the optimal AS events into the multivariate Cox proportional hazards regression analysis. The multivariate analysis was performed to build up a risk score model. The ideal co-coefficients for the prognostic signatures were also determined. The beta value is the coefficient estimated by Cox analysis, which is equal to log (HR). A risk score for each patient was calculated as the sum of each AS's score, which was obtained by multiplying the PSI value of a AS event and its corresponding coefficient. Then the TCGA cohort was divided into high and low-risk groups base on the median value of the risk scores. The difference in OS between high and low-risk groups was evaluated by the Kaplan-Meier method and log-rank test.

The risk score and other important clinicopathological parameters including age, gender, tumor grade and TNM stage were included to construct a nomogram model. Calibration plots were used to observe the prediction accuracy of the nomogram model.

The expression profiles of 404 SFs were obtained from the TCGA HNSCC dataset. Pearson correlation analysis was conducted to evaluate the association between the SFs and the prognosis-related AS events. Only factors satisfying the following conditions: p <0.05 and Pearson correlation coefficient >0.7 were chosen to build the SF-AS regulatory network with Cytoscape version 3.6.1.

The independent t test or chi-square test were used to compare the differences of continuous or categorical variables between the discovery and validation cohorts. A p value of less than 0.05 was regarded as statistically significant.

AS profiles in HNSCC

Identification of the OS-associated AS events

Construction of prognostic signatures based on each type of AS events

The upset plot of gene interactions among the seven types of AS events in TCGA HNSCC cohort. 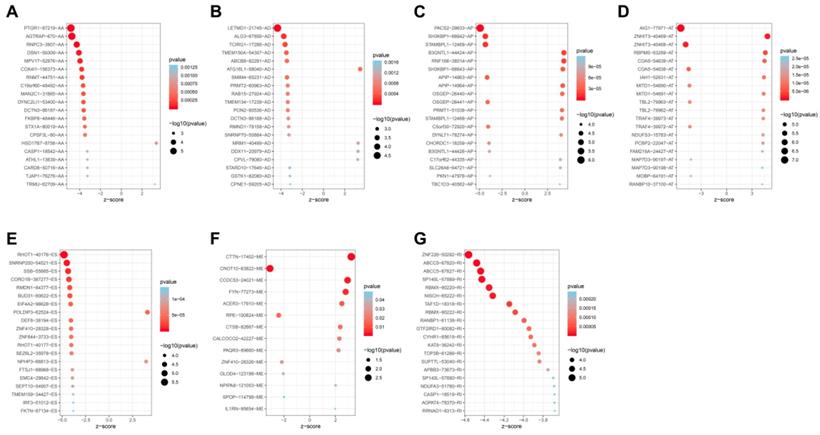 Development and validation of a AS-based prognostic signature

Development of a prognostic signature based on the seven types of AS events in the discovery cohort. (A) The distributions of risk scores in the two groups. (B) The distributions of OS and OS status between two groups. (C) The PSI values of the five prognostic AS events in the high and low-risk groups. (D) The HNSCC cases in the high-risk group had significant shorter OS than those in the low-risk group. 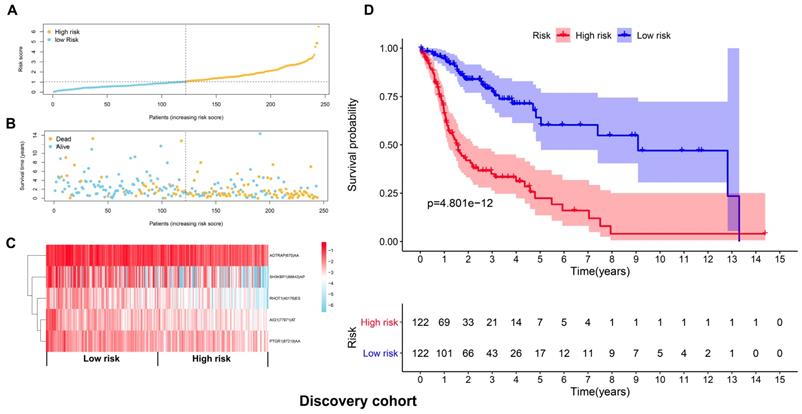 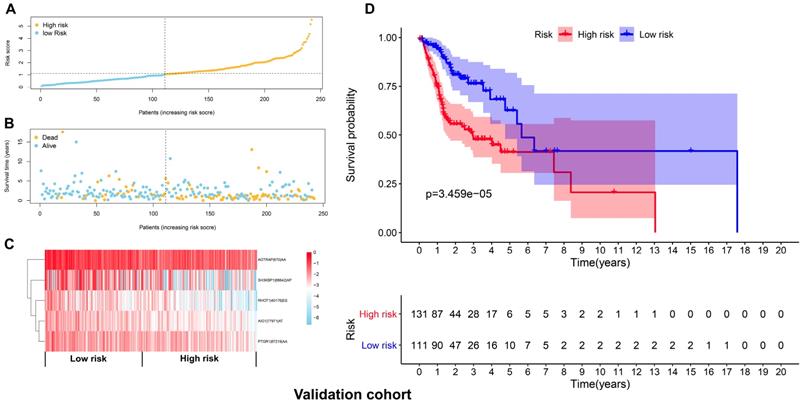 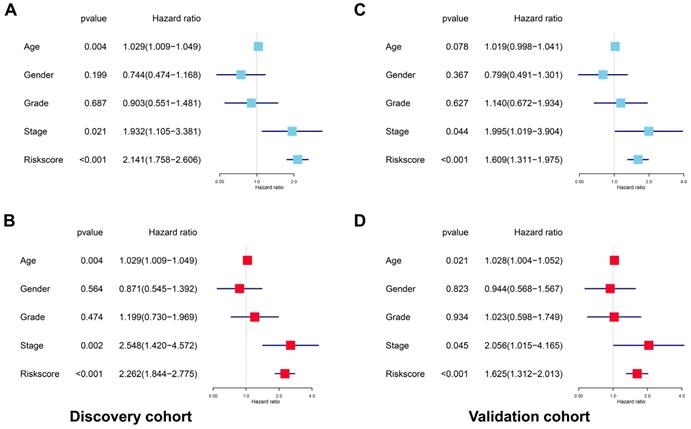 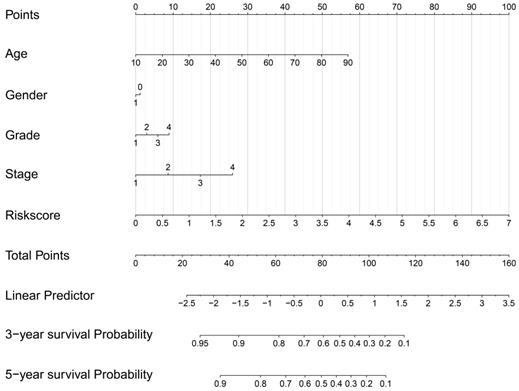 The predictive power of the prognostic signature-based nomogram mode evaluated by calibration curves. The calibration plots demonstrated that the nomogram model exhibited excellent performance for predicting the 3-year OS (A) and 5-year OS (B).

As the above AS-based prognostic signature showed great promise for predicting the prognosis of HNSCC, a more convenient and sensitive nomogram model which included the AS-based prognostic signature and other clinicopathological factors was developed. As shown in Figure 8, the 3-year OS or 5-year OS of each HNSCC patient could be easily predicted by calculating the total nomogram score. The calibration plots were drawn to evaluate the reliability of the nomogram model. Oure results showed that the nomogram model predicted outcome was almost overlapping with the actual outcome for both 3-year OS or 5-year OS of HNSCC (Figure 9A-9B).

The Pearson correlation analysis was performed to identified the most correlated OS-associated AS events and SFs. Only the SF-AS interactions with the coefficients larger than 0.7 were included in the Figure 10. Our results showed that many SFs such as DDX39B, CLASRP and PRPF39 might play important roles in regulating the changes of AS events.

The interaction network between SFs and OS-associated AS events. The red or green ellipses represented the AS events positively or negatively correlated with OS. Violet rectangles indicated SFs. The positive/negative correlations (r>0.7 or r<-0.7) between SFs and AS events were indicated with red/green lines. 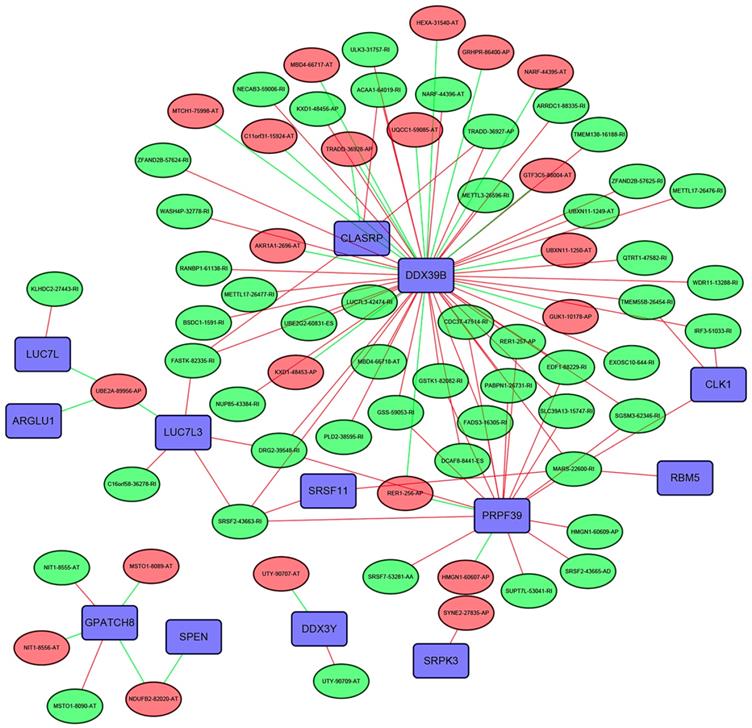 This might be the first study to construct and validate a robust AS-based prognostic signature for HNSCC. Although Xing et al revealed some prognosis-related AS events and built up some prognostic models in HNSCC, they did not validate their findings [13]. In addition, the reliability and effectiveness of their prediction models was unknown. Similar with our findings, altered AS profiles has been found to be associated with prognosis in many types of cancers. For instance, a total of 3691 and 2403 AS events were found to be significantly correlated with survival in lung adenocarcinoma and lung squamous cell carcinoma [14]. Similarly, a robust prognostic prediction model which included seven AS events showed great promise for predicting OS of patients with kidney renal clear cell carcinoma [15].

Normal alternative splicing plays an essential role in regulating many biological processes such as proliferation, growth, differentiation and development [16]. Abnormal splicing can generate protein isoforms that promote the formation and progression of tumor as well as resistance to therapy [17, 18]. SFs are the important regulators for the alternative splicing. Therefore, it is common to observe that deregulation of SFs is closely involved in tumor development [19, 20]. Our results showed that DDX39B seemed to be a central node in the SF-AS interaction network. Awasthi et al revealed that DDX39B was important for maintaining the normal levels of pre-ribosomal RNA by controlling its stability and synthesis. In addition, DDX39B was frequently upregulated in many cancer types and promoted the proliferative capacity of cells [21]. Activation of androgen receptor (AR) splice variants, especially AR-V7, are associated with unfavorable clinical outcome of prostate cancer. DDX39B was demonstrated to be an upstream regulator of AR-V7, indicating that it plays a critical role in regulating the progression of prostate cancer [22].

Collectively, we have identified the OS-associated AS events in HNSCC. In addition, a robust AS-based prognostic signature is successfully built up to accurately predict the OS of HNSCC, which might contribute to facilitate personalized clinical management of patients with HNSCC.