Acute myeloid leukemia (AML) is a clonal and heterogeneous disease characterized by proliferation of immature myeloid cells, with impaired differentiation and maturation. Spinster homolog (SPNS) is a widely distributed transmembrane transporter, which assists sphingolipids in playing their roles through the cell membrane. However, the expression and clinical implication of the SPNS family has not been investigated in AML. From the Cancer Genome Atlas database, a total of 155 AML patients with complete clinical characteristics and SPNS1-3 expression data were contained in our study. In patients who received chemotherapy only, high expressions of SPNS2 and SPNS3 had adverse effects on event-free survival (EFS) and overall survival (OS) (all P<0.05). However, in the allogeneic hematopoietic stem cell transplantation (allo-HSCT) group, we only found a significant difference in OS between the high and low SPNS3 expression groups (P=0.001), while other SPNS members showed no effect on survival. Multivariate analysis indicated that high SPNS2 expression was an independent risk factor for both EFS and OS in chemotherapy patients. The results confirmed that high expression of SPNS2 and SPNS3 were poor prognostic factors, and the effect of SPNS2 can be neutralized by allo-HSCT.

Acute myeloid leukemia (AML) is a malignancy with malignant breeding of bone marrow precursor cells, and the function and production of the normal cells are restrained [1]. AML always accompanies with specific gene variations, which can be served as the basis of its onset and effective treatment [2, 3]. Some gene abnormalities have been identified as independent prognostic factors. For example, high expressions of FUT3/6/7, PDK2/3, PAK3/7 and NCALD were proved as poor prognosis factors in AML [4-7]. While high FUT4 and PAK2 expressers have longer EFS and OS after chemotherapy [4, 6]. On account of the previous studies, there should be more research to explore the effect of gene expression on prognosis.

Spinster homolog (SPNS) is a protein stretching across cell membrane, with the function of transmembrane transporter. According to amino acid sequence homology analysis, SPNS members belong to major facilitator superfamily (MFS) [8, 9]. Previous study reported that SPNS1 and the vacuolar-type H+-ATPase (v-ATPase) could regulate proper autolysosomal biogenesis with optimal acidification, which is closely associated to developmental senescence and survival [10]. In addition, Yanagisawa et. al identified that SPNS1 was a favorable factor in Niemann-Pick type C disease (NPC) (-/-) cells [11]. SPNS2 is notarized to be the physiologically functional Sphingosine 1-phosphate (S1P) transporters, S1P is an effective and biologically active signaling molecules, which can promote the development of cancer by regulating cell proliferation, survival, migration, vascularization and lymphoangiogenesis [12, 13]. The relation between SPNS2 and S1P were previously found in animals, such as zebrafishand and mouse. Then Hisano et. al demonstrated that human SPNS2 can also transport S1P and its analogue, indicating SPNS2 may participate in the progress of cancer adjustment [14]. There were studies indicated that SPNS3 involved in sphingolipid pathways to mediate airway hyperresponsiveness and mast cell activation in asthma patients [15]. People have probed some fundamental effects of SPNS3, nevertheless still don't understand most of the roles that SPNS3 play in human disorders. But the prognosis of SPNSs in AML has never been investigated.

Here we conducted a prognosis study to investigate the impact of the SPNS genes in AML patients. Our study disclosed the guiding significance of SPNS expression in prognosis of AML, high expression of SPNS2 and SPNS3 were poor prognosis in chemotherapy patients, and SPNS3 was a poor indicator for OS in allo-HSCT patients.

A total of 155 AML patients with complete clinical data and SPNS expression from The Cancer Genome Atlas (TCGA) database were included in this study (https://cancergenome.nih.gov/). Eighty-four patients underwent chemotherapy only, and 71 also received allogeneic hematopoietic stem cell transplantation (allo-HSCT). Clinical characteristics of AML were expounded, the end points of this study were event-free survival (EFS) and overall survival (OS). OS referred to the time from diagnosis to death for any reason or the last follow-up time. EFS refers to the time from diagnosis to the first event, such as relapse, death, etc. Clinical and molecular characteristics were expounded, including peripheral blood (PB), white blood cell (WBC) counts, PB blasts, bone marrow (BM) blasts, French-American-British (FAB) subtypes, and the frequencies of known recurrent genetic mutations. The informed consent of patients was obtained, and the study protocol was approved by the Washington University Human Studies Committee.

The clinical and molecular characteristics of the patients were summarized using descriptive statistical methods. Data sets were described by median and/or range. The Mann-Whitney U-test was used as appropriate to compare numerical comparison and χ2 test for comparison of categorical and numerical data between two groups. Survival rates were estimated using the Kaplan-Meier method and the log-rank test. The univariate and multivariate Cox proportional hazard models of EFS and OS were established using a limited backward elimination process. The statistical significance level was 0.05 for a two tailed test. All statistical analyses were performed using SPSS software 25.0, and GraphPad Prism software 7.0.

Clinical and molecular characteristics of the patients 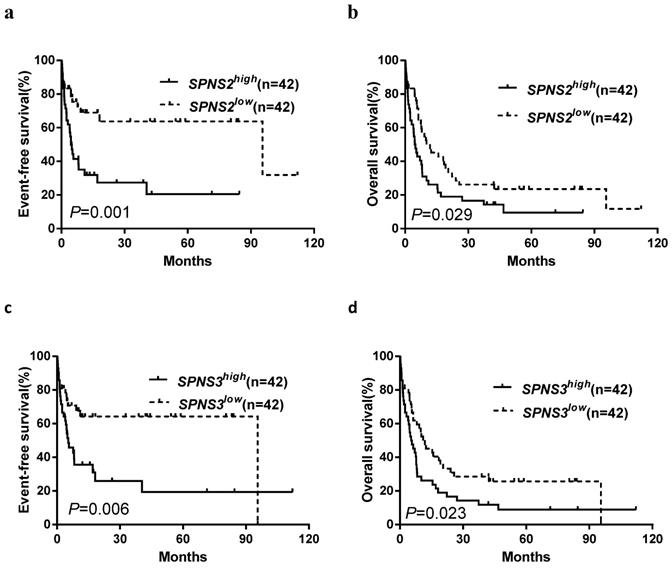 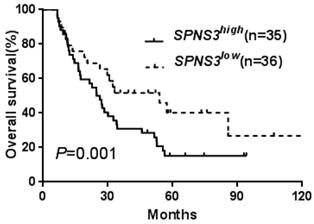 Bioinformatic analysis of SPNS2 and SPNS3 in chemotherapy-only group

In order to explore the role of SPNS2 and SPNS3 in AML patients, we performed KEGG pathway enrichment analysis and mapped unsupervised clustering heat maps. The expressions of SPNS2 and SPNS3 were shown in Figure S1 and S2. There are 3100 positive and 1158 negative co-expression genes with SPNS2 (Table S1). The results of the KEGG pathway enrichment analysis revealed that Neurotrophin, North, Adipocytokine and Sphingolipid signaling pathway were enriched in high SPNS2 expressers (Fig 3A). And SPNS2 was positive correlated with AKT and TP53, and negative associated with PIK3R2, all these genes belong to Sphingolipid signaling pathway (Fig S2, Table S2). According to the Table S3, 1941 positive and 440 negative co-expression genes with SPNS3. Different from SPNS2, patients who have high expression of SPNS3 co-express with Sphingolipid, North, Neurotrophin, mTOR and ErbB signaling pathway (Fig 3B). Otherwise, the unsupervised clustering heat maps found that SPNS3 was associated with RPL and RPS family, which expressed in Sphingolipid signaling pathway (Fig S4, Table S4).

In this study, we found high expression of SPNS2 and SPNS3 were poor prognostic factors in the patients who underwent chemotherapy only. Moreover, high expression of SPNS3 was a negative prognosis factor for OS in allo-HSCT patients. SPNS2 and SPNS3 were independent dismal prognosis factors in chemotherapy and all-HSCT group respectively.

SPNS2, as a functional transporter of S1P, has been identified to be associated with many cancers. For example, previous study found that knockout SPNS2 gene can worsen non-small cell lung cancer [16], another research illustrated SPNS2 may play a role in inhibiting the development and progression of gastric cancer [17]. However, another previous paper revealed that lacking of SPNS2 can reduce the regulation ability of S1P on lymphocyte transport, leading to the reduced lymphocyte circulation in tissues, the proportion of T cells and NK cells then increased to kill the tumor cells more effectively [18]. And SPNS2 can also promote the tumor growth via transporting S1P to extracellular environment [19].

SPNS3 is an atypical Solute carriers (SLCs) of major facilitator superfamily (MFS) type [22], and it can mediate the progress of the apoptosis and autophagy in mammal [23-25]. Autophagy-lysosome pathway (ALP) is one of the most important approach to eliminate abnormal proteins in human cells and there were some studies indicated that some genetic variation in autophagy-lysosome pathway plays a vital role in cancer development, such as lung cancer, gastric cancer, breast cancer, and renal cell carcinoma [26]. From the KEGG genes enrichment we can see SPNS3 mainly takes part in the Sphingolipid signaling pathway, and SPNS3 may also develop its function via similar mechanism as SPNS2 in AML [20]. In our study, overexpressed SPNS3 had a bad significance in both the chemotherapy group and the all-HSCT group. According to the above information, overexpression of SPNS3 may regulate and control the progression, proliferation and differentiation of AML by autophagy. As patients with high SPNS3 expression had bad survivals, SPNS3 may can be used as predictor for AML patients in the future.

Multivariate analysis of EFS and OS in chemotherapy-only group and allo-HSCT group.

In summary, high expressions of SPNS2 and SPNS3 can indicate adverse prognosis in chemotherapy AML patients, and the prognosis effect of SPNS2 can be overcome by allo-HSCT, and they might be used as predictors for AML patients in the future. Nevertheless, a larger sample size was needed to further validate our result and pathogenesis in AML still need further investigation.

We thank the TCGA database for providing data for us in this report.

This work was supported by grants from the National Natural Science Foundation of China (81600089).

The datasets of this report were generated by TCGA.

Ethical approval and consent to participate

This study was approved by the Helsinki declaration and its subsequent amendments.