The development of bronchoscopy in China: a national cross-sectional study

Objective: To investigate the development of bronchoscopy in China and compare it with its application in the early 21st century.

Methods: The data collection was based on questionnaires. Three hundred and nineteen hospitals, which distributed across 30 provinces and 130 cities, were included in the study. Data about the application of bronchoscopy in Shanghai and Hunan province in the early 21st century are also involved for comparison.

Conclusion: All different classes of hospitals in China are capable of carrying out conventional bronchoscopy diagnosis and therapeutic projects, and newly developed bronchoscopy technology has gradually spread in high-level hospitals since 21st century. The higher class the hospital was, the earlier bronchoscopy was performed. Respiratory endoscopy in China has developed rapidly since the early 21st century and the construction of respiratory endoscopy center and the personnel training are on the right track, but it is also faced with inadequate equipment, unbalanced regional development and insufficient personnel allocation.

Bronchoscopy was an endoscopic technique of visualizing the inside of the airways for diagnostic and therapeutic purposes, including investigation of lesions in the bronchi, fine needle aspiration of the tumor, hemostasis and stent implantation for bronchial stenosis, which was pivotal for amelioration of local symptoms and subsequent treatment after confirmed diagnosis [1]. Novel endoscopic techniques are being used nationwide in China such as the radial endobronchial ultrasound, convex probe (EBUS), electromagnetic navigation and the archimedes virtual bronchoscopy system. Additionally, where necessary the transthoracic ultrasound convex probe is being used in order to biopsy superficial lesions of the thorax [2-9]. There already have been international reports on the diagnosis and treatment of respiratory endoscopy in the United States, Britain, Japan and other countries from 1986 to 2010 [10-15]. In 2002, Bai C. et al. [16] made a statistical analysis about the clinical application of the bronchoscopy in Shanghai, which was initial internationally recorded investigation report on the application of bronchoscopy in China. In 2009, Nie X. et al. [17] reported clinical practice of bronchoscopy in some limited areas of China on Chest. Therefore, in order to make a comprehensive understanding of development of bronchoscopy in the recent 10 years in China, the study was performed with network questionnaires nationwide in 2017.

Object of the survey

The collection of data was based on questionnaires. The required information was as follows:

After completing the collection of online questionnaires, the data are screened uniformly to find out the technical errors in the filling process. Questionnaires that didn't conform to the standards and failed to fill in data were invalid and not included in the statistics. Categorical data were shown as percentages. All reported data from each hospital were gathered. Afterwards, data would be kept in a password-protected database at the Department of Pulmonary and Critical Care Medicine in Changhai Hospital, which would only be disclosed to authorized individuals. The accuracy of the data entry into the database would be confirmed by two administrators.

Clinical practice of diagnosis and therapeutic bronchoscopy in China

The period of performance of diagnostic and therapeutic bronchoscopy 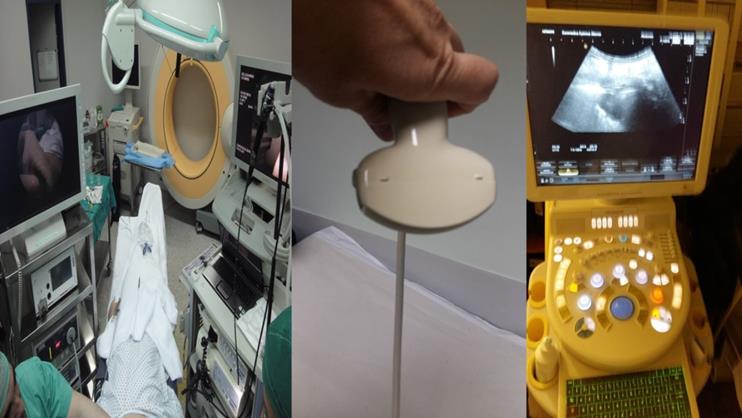 The average period of performing diagnostic and therapeutic bronchoscopy

Items of diagnostic and therapeutic bronchoscopy

At present, there are dozens of clinical diagnostic and therapeutic techniques, which can be used to observe the tracheal tract and local lesions, tissue sampling, hemostasis, resection or reconstruction of the passage and so on. They play an irreplaceable role in clinical diagnosis and therapy. Through the statistics of the projects carried out by hospitals at all levels, we can understand the current clinical application of various diagnostic and therapeutic projects. Based on the intervention procedure we use sedation with propofol or general anesthesia with plastic tube intubation or rigid bronchoscope intubation (STORZ). Moreover; we use for all the patients receiving general anesthesia jet-ventilation respiratory model since this model keeps the CO2 low [18].

Diagnostic bronchoscopy performed in hospitals with different classes per month

Therapeutic bronchoscopy performed in hospitals with different classes per month

The number of cases receiving diagnostic and therapeutic bronchoscopy

If taking average number of cases of diagnosis and therapeutic bronchoscopy per hospital per month in each area as an indicator of the capacity of bronchoscopy for local residents. Therefore, Shanghai (21.23), Beijing (11.77) and Shaanxi (9.79) have more resources of respiratory endoscopic intervention per million resident populations.

The area and number of respiratory endoscopic center

On average, the area and number of examination room for bronchoscopy was 122.7 m2 and 2.2 per hospital. Regarding tertiary hospitals, the average area of the examination room was 150.3 m2 and 99.7 m2 in first- and second-class hospitals, respectively. While there were 2.4 and 2.2 rooms for bronchoscopy in these two hospitals, respectively. Respiratory endoscopic center in tertiary hospitals tended to be broad and numerous (Supplementary Table S4).

Compared with other area in China, there were more flexible bronchoscopes (including electronic and fiberoptic bronchoscopes) on average per hospital in Shanghai (17.0), Beijing (12.7), Shanxi province (9.4), Tianjin (8.8) and Hubei province (7.9) (Table 6). Patient access to flexible bronchoscopes was calculated by the number per million populations. The areas with the highest ratio were Shanghai (0.7025), Beijing (0.5851) and Tianjin (0.5655). More details were shown in Supplementary Table S5.

The allocated doctors and anesthetists

Comparison of diagnosis and therapeutic endoscopy in Shanghai and Hunan province

Comparison of the medical staff

Comparison of the medical staff

The average number of equipment per hospital

In 2017, the TBNA rate of respiratory endoscopy center of Hunan hospital was 66.7%, 66.7% stent implantation, 75.0% high-frequency electrocoagulation, 8.3% laser, and 33.3% freezing. Compared with 2005, the development rate of each diagnosis and therapeutic project was improved to different degrees (P<0.05, Supplementary Table S8).

Comparison of medical staffs for endoscopy

According to the statistical results, in 2017, Shanghai hospital respiratory endoscopy center was equipped with an average of 10.0 doctors and 6.6 anesthesiologists, among which 83.6% were doctors with master's degree or above. Hospitals in Hunan province have 5.3 doctors and 3.2 anesthesiologists on average, among which 53.4% are doctors with master's degree or above. The average number of doctors in Shanghai increased by 0.85 times from 2002 to 2017 and in Hunan province by 0.66 times from 2005 to 2017.

In the respiratory endoscopy examination project carried out in Shanghai in 2017, the implementation rate of lung biopsy was 100%, virtual navigation was 63.6%, electromagnetic navigation was 45.5%, and the implementation rate of various technologies in Hunan province was 50.0%, 8.3% and 8.3% respectively. The development rate of the three technologies in Shanghai was significantly higher than that in Hunan province (P<0.05, Supplementary Table S9).

While gains made on all facets of bronchoscopy over the last 30 years in China have been remarkably robust and positive, there are still some main problems to be emphasized: The first one is that here are still major gaps in the configuration of facilities and equipment. In the past 10 years, the diagnosis and therapeutic work of hospitals at all levels has been promoted in an orderly manner, and the bronchoscope diagnosis and therapeutic technology has developed rapidly, but it still cannot meet the needs of patients seeking medical treatment. China is a country with a large population, and the incidence of respiratory diseases has been high in recent years. Although the scale of specialized hospitals is relatively large, general hospitals still account for the majority of regional disease diagnosis and treatment. From the current development of general hospital, hardware problems such as small operation site and few operation rooms still cannot meet the existing clinical needs. Secondly, the resource distribution of bronchial interventional treatment is still unreasonable.

The supply and demand of medical resources are not only affected by the rate of medical work, but also the rational allocation of medical resources. We will establish a new pattern of medical resources distribution in which community hospitals complete routine inspections, large and medium-sized hospitals carry out diagnosis and therapeutic work, and speciality hospitals have their own way to perform diagnosis and therapeutic work. At present, diagnosis and therapeutic technology can only be developed in large hospitals, but the launching rate of emerging technologies, such as electromagnetic navigation, virtual navigation, and microwave diagnosis is still low. While small and medium-sized hospitals can carry out the routine diagnosis and therapeutic bronchial intervention, but poor hardware facilities and small scale, which cannot meet the routine diagnosis work of the majority of community residents, have restricted they from carrying out reasonable triage for patients from large hospitals. In addition, the total number of bronchial endoscopy is still small. At present, there is still a large shortage in the number of respiratory endoscopy physicians in China due to the increasing number of patients in China. Each hospital in China has an average of 7.4 doctors and 4.8 anesthesiologists in the bronchoscopy room. Among them, full-time respiratory endoscopy physicians are even scarcer, and many bronchoscopy rooms are still not equipped with full-time anesthesiologist and anesthesiologist nurses.

Here, we give some corresponding measures and suggestions to the problem. Firstly, the government should pay more attention to the development of bronchoscopy and recognize its importance in the diagnosis and therapeutic work of respiratory diseases. The hardware construction of hospital bronchoscope rooms should be increased, so as to better meet the medical needs of grassroots people. In the second place, implementing the policy of hierarchical diagnosis is the key to improving the utilization rate of medical resources. Community hospitals should improve the rate of routine diagnosis to meet the needs of the masses at the community level. After the initial diagnosis in community hospitals, bronchoscope intervention is carried out by the superior hospitals to alleviate the over-utilization of medical resources in large and medium-sized hospitals. Furthermore, the medical management department should standardize the process of training and examination for endoscopy physicians. It is strictly prohibited for doctors who are not qualified to carry out the diagnosis and therapeutic work of respiratory endoscopy. At the same time, relevant anesthesiologists and nurses in the bronchoscope room should receive corresponding standardized training before taking up their posts, so as to ensure the standardization of medical process.

This study is supported by Startup Fund for Youth of Changhai Hospital (No.2018QNA014) and Shanghai Clinical Research Center for Infectious Disease (Tuberculosis) (No.19MC1910800).