Endometrial cancer is the most prevalent malignancy of the female genital tract in many countries. Women have a 2-3% lifetime risk of developing this malignancy [1]. The majority of endometrial cancer patients diagnosed at early stage and cured by surgery resulted in 5-year survival rate of 95% but women diagnosed with advanced or recurrent disease have a poor prognosis with 5-year survival rate of 17%, which seriously affect the health of women [2]. However, the available treatment options after initial therapy at the time of disease progression or recurrence are still limited [3]. Therefore, better understanding of the molecular mechanism of endometrial cancer and developing new therapies based on molecular signatures are needed to improve patient's survival rate, but the key mechanisms mediating tumorigenicity of endometrial cells are not fully clear.

N6-methyladenosine (m6A) is the most prevalent messenger RNA modification in eukaryotes. The biological effects of this reversible modification are mostly through methylase, demethylase and association recognize proteins [4-7]. m6A modification is reported to participated in regulating RNA structure [8], translation [9] and degradation [10]. m6A-dependent mRNA regulation affects diverse biological processes in mammals [11]. Alkbh5 knockout mice have shown compromised spermatogenesis [7]. m6A carried mRNA regulates the differentiation of stem cells by affecting mRNA stability and regulating transcriptome switching during embryonic development [12-14]. Consistent with these roles, m6A mRNA methylation also affects cancer initiation and progression in a variety of cancers [15-17]. Recently reported that reduced m6A mRNA methylation as an oncogenic mechanism in endometrial cancer and identify m6A methylation as a regulator of AKT signaling [17]. However, how the key target genes of ALKBH5 affect endometrial cell activity and the underlying pathways mediate these changes are still far from elucidated.

“Insulin like growth factor (IGF) axis” plays a key role in regulating cell growth and survival and affecting virtually every organ in the body [18-20]. Clinical and experimental data identified the insulin-like growth factors (IGF1, IGF2) as important players in endometrial tumors in particular [21]. Both IGF1 and IGF2 ligands activate the cell-surface tyrosine kinase receptor IGF1 receptor (IGF1R), which coupled to several intracellular secondary messenger pathways, including the Ras/Raf/MAPK and PI3K/AKT signaling cascades [22]. The IGF1R is vital for cell survival, as illustrated by the lethal phenotype of the IGF1R KO mice. Elevated IGF1R expression was observed in 91.3% of endometrial cancers, consistent with the key role of the IGF in cancer progression, IGF1R and IGF2 levels were much higher in advanced stage malignant tissue compared to early stages or endometrial hyperplasia, which indicated that over-expression of the IGF1R and IGF2 genes are associated with poor outcome in endometrial cancer [23]. Moreover, insulin/IGF1R signaling can induce the expression of membrane-type matrix-metalloproteinase, which is the key regulator of cell invasion, migration and tissue remodeling [24, 25]. It is reported that P53 and BRCA1 can regulated the IGF1R expression [26, 27]. However, how to accurately regulate the expression of IGF1R, especially via the RNA epigenetic way, subsequently affecting the downstream signaling of IGF1R, still needs to be illustrated.

All samples were obtained with informed consent under a protocol approved by the ethics committee of Shanghai First Maternity and Infant Hospital, China. The study is compliant with all relevant ethical regulations regarding research involving human participants. All Endometrial cancer samples were diagnosed and assessed in accordance with the International Federation of Gynecology Oncology (FIGO) criteria (2009). All the Endometrial cancer samples must have been diagnosed as endometrial adenocarcinoma and underwent initial surgery. All patients had no history of malignancies. Clinical and pathological data of all patients were retrieved from their records at our department. Patient's characteristics are listed in Table 1. Fresh endometrial tumors and adjacent normal endometrium were separately dissected at the time of surgery and immediately transferred to RNAlater (Thermo Fisher, AM7021). Tissues were homogenized in TRIzol reagent. Total RNA and protein were extracted following the manufacturer's instructions.

For invasion assays, cell-culture inserts (0.8 μm, Falcon no. 353097) were pre-coated with Matrigel (40 μg/insert, Corning) in serum-free medium for 30 mins at 37 °C. For migration assays, inserts were not pre-coated. 40,000 cells per insert were seeded in the upper chamber of the insert and cultured in 300 μL RPMI-1640 medium supplemented with 2% FBS. Complete RPMI -1640 medium supplemented with 10% FBS was used in the lower chamber. Following 16-24 h of migration or invasion, fluorescent stain (calcein-AM) was added to each lower chamber and incubated for 30 mins. Images were collected with a Nikon Eclipse Ti2 with NIS Elements imaging software (version 5.02) and images analyzed with ImageJ (version 1.51i).

500 cells were seeded per well in six-well culture dishes. After 7 to 10 days, the culture medium was removed and the cells were washed twice with PBS, fixed with 4% paraformaldehyde for 20 min, stained with 0.1% crystal violet (in 25% methanol) for 20 min, washed with water and dried. Colonies were counted manually.

5000 cells were seeded per well in a 96-well plate. The cell proliferation was assessed by assaying the cells at various time points using the Cell counting kit-8 (Sigma-Aldrich, 96992) following the manufacturer's protocols. For each cell line tested, the signal was normalized to the value observed about 24 h after seeding.

The procedure was adapted from the previous report [29]. For m6A-qRT-PCR, total RNAs were firstly subjected to mRNA purification by Poly(A) selection (FastTrack MAG Micro mRNA isolation kit, invitrogen), but not randomly fragmented to facilitate RT with oligo dT and PCR amplification. Then it was performed as described in m6A-seq assay but without generating cDNA library. For comparing m6A abundance changes, relative enrichment was first normalized with inputs, and then analyzed by comparing the data from m6A-immunoprecipitated sample. All samples were analyzed in triplicate qPCR.

HEC-1-A cells were seeded in 24 well plates at 60% confluency. After 24 h, actinomycin D (A4262, Sigma) was added to 5 mg/mL 6 h, 4 h, 2 h and 0 h before collection. The total RNA was purified using an RNeasy kit with an additional DNase-I digestion step on the column. RNA quantities were determined by qRT-PCR. The HPRT1 gene was used as a reference gene when carrying out qPCR.

Related genes were obtained from human endometrial cell by RT-PCR and subsequently cloned into pcDNA vectors. Each construct was confirmed by sequencing. The corresponding primers used in this study are listed below: 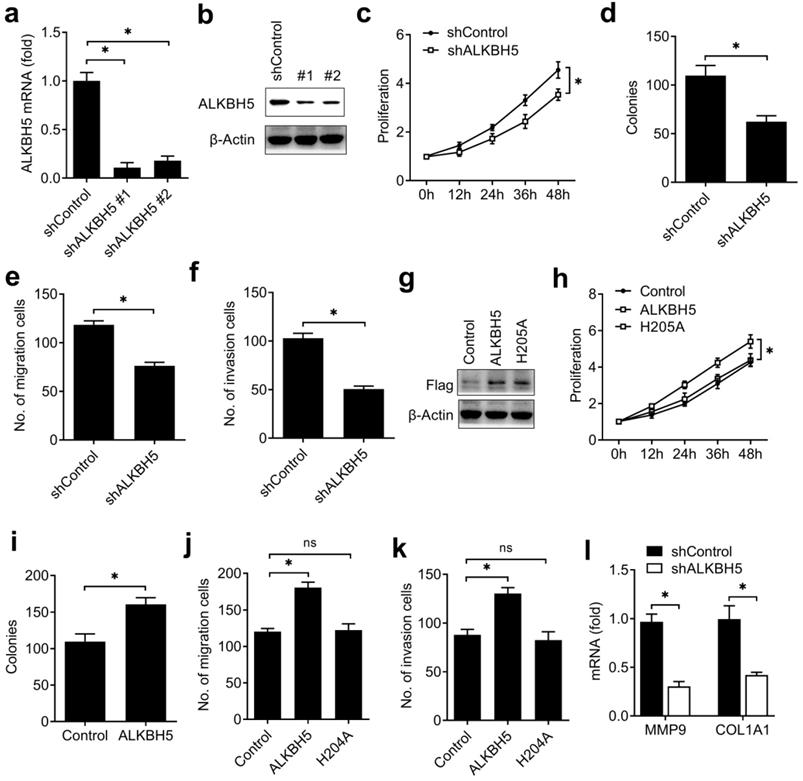 To further determine the downstream genes and signal pathway of ALKBH5 in regulating the activity of endometrial cell, we confirmed that knockdown of ALKBH5 inhibited collagen type I alpha 1 chain (COL1A1) and the matrix metallopeptidase 9 (MMP9) expressions in HEC-1-A (Figure 2L). These results indicated that ALKBH5 promoted the activity of endometrial cell probably via enhancing the MMP9 and COL1A1 expression. 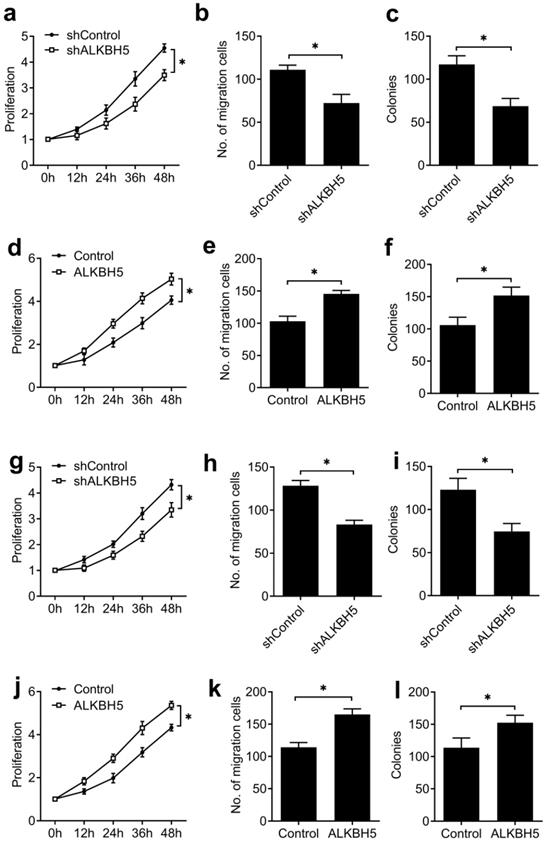 Due to that the regulation of ALKBH5 on endometrial cell activity depended on its demethylation activity, we intended to identify the transcripts with demethylation in endometrial cancer. Previous m6A-seq results showing decreased m6A methylation were enriched in KEGG terms related to focal adhesion (IGF) signaling pathway [17]. Because the IGF signaling pathway played an important role in the development of endometrial, we hypothesized that ALKBH5 might promote the activity of endometrial cell through activation of the IGF pathway. Intriguingly, we found that IGF1R of IGF signaling pathway had m6A methylation modifications according to m6A-seq data [17]. We performed immunoprecipitation of the HEC-1-A mRNA with m6A antibody followed by RT-qPCR, and found that, in addition to negative control HPRT, IGF1R and TNS3 (positive control) mRNAs were enriched in the m6A antibody-bound fraction, confirming the presence of m6A sites on the IGF1R transcripts (Figure 4A). IGF1R showed decreased enrichment in the m6A antibody-bound fraction of the endometrial cancer when compared with adjacent normal endometrium (Figure 4B), thus indicating that m6A sites on IGF1R mRNAs disappeared in the endometrial cancer. These results revealed that ALKBH5 regulated the activity of endometrial cell probably via demethylating IGF1R transcripts in IGF signaling pathway.

As ALKBH5 is an m6A eraser of RNA methylation, we intend to investigate whether ALKBH5 targets the m6A modification of IGF1R mRNA. We performed immunoprecipitation of the HEC-1-A mRNA with m6A antibody, and found that, IGF1R showed increased enrichment in the m6A antibody-bound fraction when ALKBH5 was knocked down, but decreased enrichment when the m6A 'writer' METTL3 was knocked down (Figure 5A), thus indicating that m6A sites on IGF1R mRNAs were the direct substrates subject to ALKBH5-catalyzed demethylation. Furthermore, the enrichment of IGF1R mRNAs to m6A antibody decreased in HEC-1-A after overexpression of wild-type ALKBH5, but not altered after overexpression of an ALKBH5 mutant lacking demethylation activity (H204A) (Figure 5B). These observations further support that ALKBH5 can erase m6A modification of its substrates IGF1R.

ALKBH5 regulated the activity of endometrial cell via targeting IGF1R

On the basis of our findings, we propose the following working model to explain how ALKBH5 promotes the activity of endometrial cell. ALKBH5 expression significantly upregulates in endometrial cancer, and ALKBH5 demethylate the m6A modifications of IGF1R transcripts, and promotes IGF1R expression leading to the activation of the IGF signaling pathway, which consequently induces COL1A1 and MMP9 expression, subsequently increases the invasion and migration of endometrial cells.

ALKBH5 catalyzed m6A demethylation of IGF1R mRNA and promoted IGF1R expression. (a,b) Enrichment fold of the indicated mRNA transcripts in m6A IP versus mRNA input control in HEC-1-A after transfected with the indicated shRNA for 72 h (a) or plasmids (b) for 48 h. Each transcript was quantified by qRT-PCR. (c,d,f,g) qRT-PCR and immunoblot analysis of the IGF1R mRNA and protein in HTR-8/SVneo transfected with shALKBH5 for 72 h(c,d) or plasmids as indicated for 48 h (f,g). (e,h) RNA lifetime for IGF1R in HEC-1-A cells transfected with shALKBH5 (e) or plasmids (h) was determined by monitoring transcript abundance after transcription inhibition (TI). ns: not significant; *p<0.05 (Student's t-test). Data are representative of three independent experiments (mean and s.d. of technical triplicates (a-c,e,f,h)). 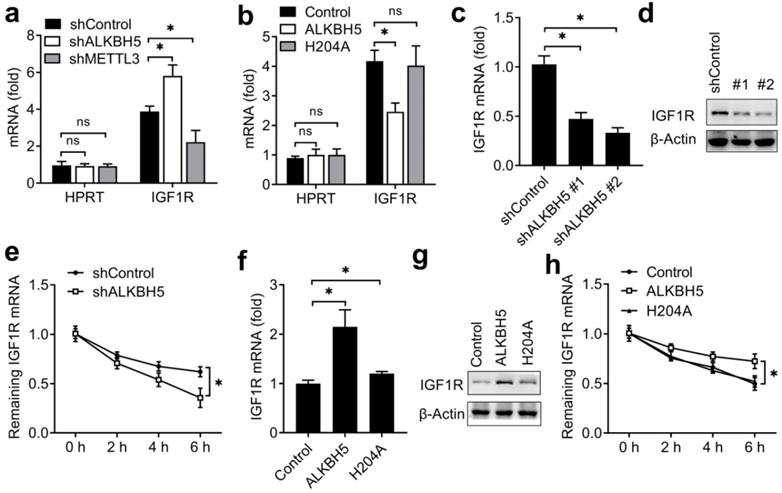 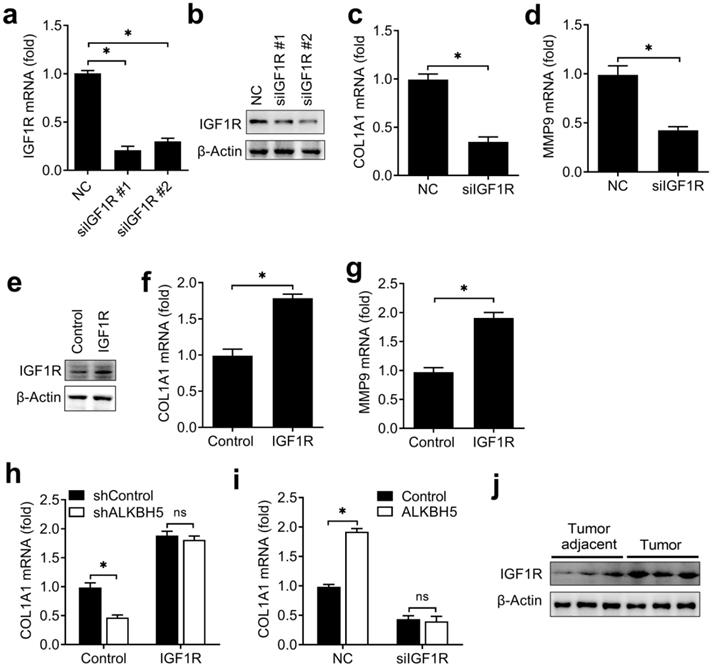 It is reported that about 70% of endometrial tumours exhibit reduced m6A methylation when compared with matched normal endometrium, which were probably caused by either mutation of METTL14 or reduced expression of the METTL3 methyltransferase [17]. We also found that ALKBH5 expression was upregulated in endometrial cancer, this maybe also the important reasons for endometrial cancer with reduced m6A methylation, this is consistent with previous observations that ALKBH5 was significantly upregulated in many cancer tissues [31]. Using the TCGA databases to analyze the expression and survival of ALKBH5 in uterine corpus endometrial carcinoma (UCEC), we found that the expression of ALKBH5 was downregulated in primary tumor compared to normal tissue and the effect of ALKBH5 expression level on UCEC patient survival is not significantly (data not shown). These results have some differences with our findings - we speculate that the reason for the difference is that our analysis is relative to the matched adjacent tumor tissues, while TCGA analysis is relative to the unmatched normal tissues.

Changes in IGF1 expression and signaling play key roles in the regulation of normal uterine physiology [22]. Regulation of IGF1R expression and action by tumor suppressors (p53, BRCA1) involved in the etiology of gynecological cancer has a major impact on cell's activity [33]. Regulation of IGF1R expression is an important mediator of these changes to endometrial cell invasion mediated by ALKBH5. Increased IGF1R expression is probably one of the main mediators of increased activity in cells with ALKBH5 overexpression, as overexpression of IGF1R is sufficient to rescue the inhibition of the COL1A1 expression mediated by ALKBH5 knockdown. These findings may be applicable beyond endometrial cell invasion to other cancers driven by ALKBH5 overexpression. However, we cannot rule out the involvement of other signaling pathways that could be altered directly or indirectly by change of ALKBH5, this need to be further investigated.

20. Dobolyi A, Leko AH. The insulin-like growth factor-1 system in the adult mammalian brain and its implications in central maternal adaptation. Front Neuroendocrinol. 2019;52:181-94