Methods: A retrospective analysis of patients with T1-T2N0 glottic laryngeal carcinoma who underwent EBRT or TLM between January 2012 and December 2018 in PUMCH. The Kaplan-Meier method was used to analyze local control, progression-free survival and overall survival, and the VHI-30 scale was used to evaluate the effects of EBRT and TLM on vocal function.

Conclusion: The application of EBRT for early glottic laryngeal carcinoma (T1-T2N0) had an obvious curative effect with high LC and OS rates, no serious side effects, and a low voice handicap rate.

The aim of this study was to analyze the efficacy of EBRT and TLM in patients with early glottic laryngeal carcinoma (T1-T2N0), the relevant influencing factors, and the use of the VHI-30 scale to evaluate the effect of EBRT and TLM on voice quality.

A nonrandomized, longitudinal retrospective analysis was conducted at the Department of Radiation Oncology, Peking Union Medical College Hospital, from January 2012 to December 2018. The inclusion criteria were as follows: patients with T1N0 and limited T2N0 glottic laryngeal cancer; microscopic examination- and biopsy-confirmed pathological squamous cell carcinoma throughout the mouth and throat; an evident parapharyngeal space and prepharyngeal gap on imaging; and N0 disease. Voice outcome and perceptual voice analyses were conducted using the VHI-30, and the data were collected at the baseline of the EBRT or TLM treatment and at various time points during follow-up at 6 months and 12 months.

All patients underwent CT simulation in the supine position (16 rows - Philips Bril-Liance CT Bigbore, Deventer, Netherlands) with head and neck shoulder positioning. The total tumor volume, gross tumor volume (GTV) and CTV (clinical tumor volume) were plotted on the axial CT image. GTV sketching was based on MRI findings. EBRT treatment was administered using a 6-MV X-ray apparatus. For standard fraction (SF) radiotherapy, three-dimensional conformal radiation therapy (3D-CRT) was administered, and for accelerated fraction (AF) radiotherapy, fixed-field intensity-modulated radiation therapy (FF-IMRT), volumetric intensity-modulated radiotherapy (VMAT) or Hi-Art spiral tomography therapy (TOMO) was performed. The CTV included the whole throat area; the GTV included the laryngeal area. The CTV and GTV were evenly placed 5 mm apart to form the PCTV and PGTV. The doses administered were as follows: PCTV, 60-70 Gy/30-35 f (2 Gy/f) and PGTV, 66-69 Gy/30 f (2.2-2.3 Gy/f). The radiation therapy program was generated on an Eclipse or a tomographic treatment planning system with the goal of providing at least 95% of the prescribed dose to 95% of the PCTV and PGTV. The organs at risk (OARs) were limited to the spinal cord, at 0.1 cc <45 Gy. To ensure the accuracy of the treatment, patients receiving TOMO underwent MVCT and online registration every day; patients undergoing FF-IMRT or VMAT received weekly CBCT guidance and were matched online with an error of 3 mm.

Transoral CO2 laser microsurgery was carried out under general anesthesia using a Sharpen laser with a digital accolade micromanipulator typically set in continuous or continuous superpulse mode. In most cases, the tumor was first transected to assess the depth of tumor invasion and then resected in two pieces. Resections varied from type I to type V of the European Laryngological Society (ELS) class action as during the study period, tumors requiring larger resections were treated by RT according to Dutch guidelines. Tumor specimens were pinned on a piece of cork and were sent, along with descriptive drawings, to the pathologist for histological examination. In most cases, standard practice was followed, and additional wound bed biopsies were taken and contained separately. Typically, wound bed biopsies were taken at five different points: four were taken at the edges of the tumor ground, and one deep biopsy was taken in the middle of the tumor ground. If the surgeons found it necessary, extra biopsies could be taken.

The Chinese version of the VHI is a validated 30-item questionnaire. The VHI-30 is a widely used voice evaluation scale comprising a total of 30 questions that address function, physiology, and emotion. Each part includes 10 questions relating to factors including hoarseness, difficulty breathing, difficulty with pronunciation, and vocal cord distortion. Patients score each item by selecting a response based on self-evaluation from a five-point Likert scale ranging from 0 to 4, as follows: never occurs (0 points), almost never occurs (1 point), sometimes occurs (2 points), almost always occurs (3 points), always occurs (4 points). The sum of the scores constitutes the total VHI-30 score, which ranges from 0 to 120. A higher score indicates a worse voice-related outcome[10].

Observation indicators and side effects

The baseline indicators of the patients were collected before radiotherapy, and the patients were followed up every 3 months for 2 years and every 6 months for 2 to 5 years after EBRT. The LC rate was the time interval from the end of treatment to the occurrence of local or regional recurrence. Progression-free survival (PFS) was defined as the time to local or regional recurrence or distant metastasis during or after treatment, and all time intervals were based on the time between the first event and death due to the disease. Overall survival (OS) was defined as the time from diagnosis to death or last follow-up. If no relevant event occurred, PFS or OS was defined from diagnosis to the last follow-up visit.

Statistical analysis was performed using SPSS version 25.0. The chi-square test was used to classify variables. The normality of continuous variables was determined using the Kolmogorov-Smirnov method. Student's t-test was used to evaluate variables with normal distributions, and the Mann-Whitney U test was used for variables with non-normal distributions. Data are expressed as the mean±SD. The Kaplan-Meier method was used to estimate the OS, DFS and LC rates, and the significance of prognostic factors for survival was evaluated by a univariate log-rank test. Multivariate analysis of the covariates selected in the univariate analysis was performed using Cox proportional regression. A p value <0.05 was considered statistically significant.

For the TLM group (n=94), 1 patient suffered from asphyxia and hypoxia leading to a vegetative state, 3 patients suffered from massive hemorrhage and underwent reoperation, and 3 patients with chronic side effects underwent surgical treatment for vocal cord stenosis.

The 3-year LC, PFS and OS rates of early glottic carcinoma patients after EBRT or TLM 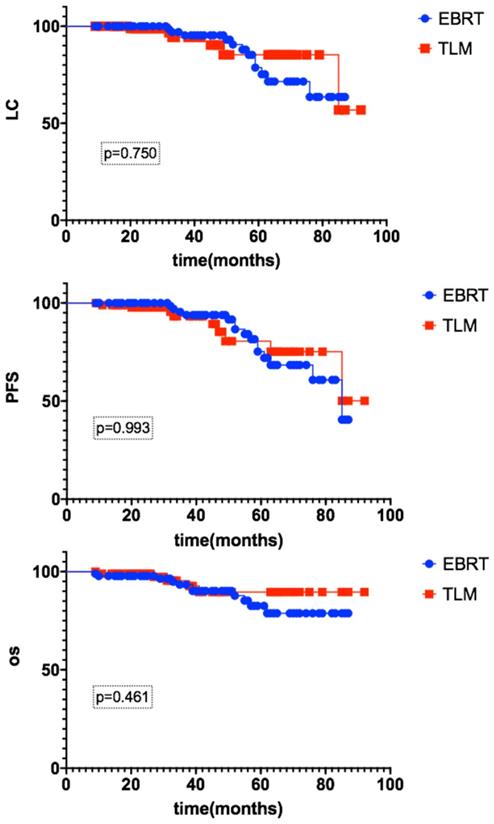 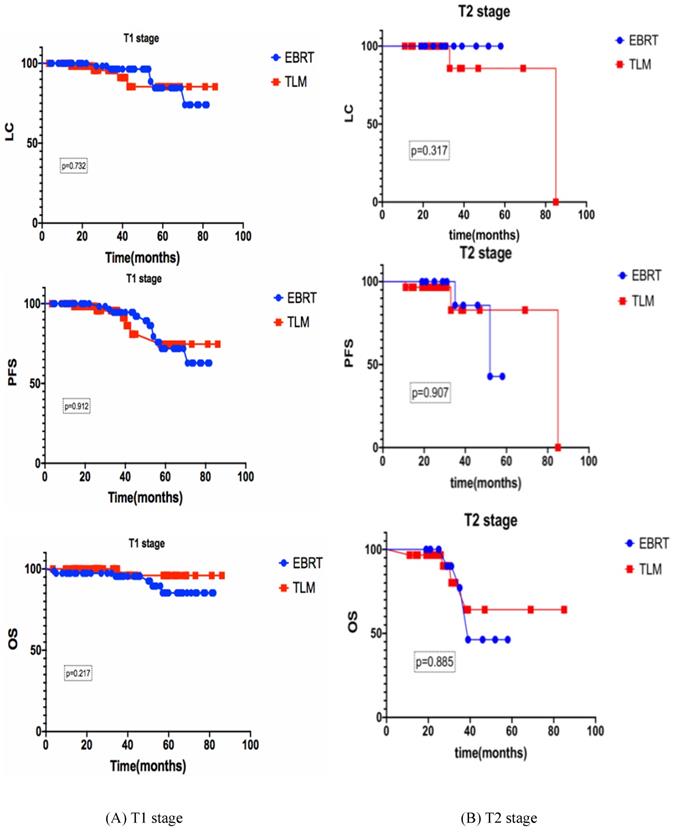 Baseline characteristics of the T1 and T2 subgroup

VHI-30 score at baseline and after EBRT or TLM

VHI-30 score at baseline and after EBRT or TLM 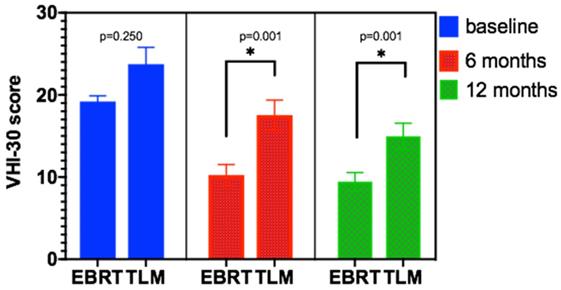 Patients with AF had longer OS than the SF group 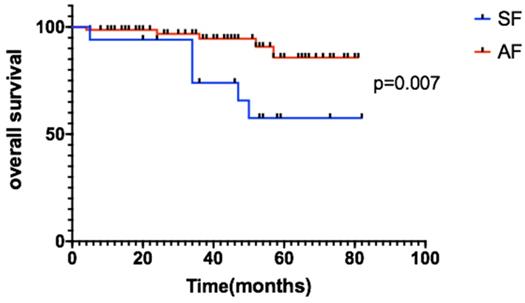 Failure pattern for patients treated with EBRT or TLM

Local treatments are generally applied to preserve the vocal function and improve the quality of life of early glottic laryngeal carcinoma patients. Due to the local infiltration and growth of carcinoma and the advancement of treatment methods, the disease is characterized by a low probability of metastasis. Because EBRT is characterized by a lack of trauma, a good curative effect, and minimal effects on vocal function and quality of life, it is becoming more widely applied for patients with early glottic laryngeal cancer [12, 13]. Because of its relatively non-invasive nature, good curative effect and minimal influence on vocal function and quality of life, TLM has progressively replaced the use of total laryngectomy/hemi-laryngectomy for early glottic laryngeal cancer patients [4, 7].

This study demonstrates the use of EBRT and TLM in the treatment of stage T1-T2N0 early glottic laryngeal carcinoma. The total 3-year OS rates of the patients were 93.3% in the EBRT group and 95.4% in the TLM group, p=0.461. There was no significant difference between the two groups. The 3-year LC rates of the EBRT group and TLM group were 95.5% vs 89.2%, 89.2% vs 92.9% and 80% vs 82.9%, respectively.For subgroup analysis, we compare the baseline characteristics of EBRT and TLM groups, there were no significant difference between two groups (see details in table 2), and also the 3-year LC, PFS and OS of EBRT and TLM in the treatment of stage T1 or T2 showed no significant difference (see figure 2 for details). In the stage T1a, T1b and T2 subgroups, the 3-year OS rates were 93.6% vs 93.3%, 90.5% vs 95.9%, and 60% vs 64.2%, respectively. PFS in the stage T1a, T1b and T2 subgroups was 97.4% vs 89.2%, 89.2% vs 82.5% and 75% vs 82.9%, respectively. These results are similar to those reported in other studies [12, 13]. Other studies also compared the efficacy of EBRT to that of TLM [7, 14]. RJ De Santis et al. retrospectively analyzed data for early laryngeal cancer (Tis-T2) at Canada's largest head and neck hospital in 2006-2013 and analyzed 75 patients based on the initial treatment. The patients were divided into two groups: the radiotherapy group and the laser-ablation group. The 5-year DSF rates of the two groups were 90.8% and 93.3%, respectively, and there were no significant differences in the 5-year LC or PFS rate [2]. A review in Martine 2017 described a comparison of treatments for T2 disease, and 48 studies showed no significant differences between radiotherapy (n=3191) and TLM (n=1156) at 5 years (75.81% vs 77.26%) [7]. A phase I clinical study conducted by Leena-Maija Aaltonen et al. compared the efficacy of laser surgery (n=32) to that of EBRT (n=28) for patients with T1a glottic laryngeal carcinoma. The 2-year local recurrence rates were similar: 10% for the TLM group and 12% for the EBRT group [8]. Thus, for patients with local early glottic laryngeal carcinoma (Tis-T2N0), EBRT appears to be effective, and the effect of radical radiotherapy is comparable to that of TLM treatment. New radiotherapy techniques, such as inverse intensity-modulated radiotherapy (IMRT), can increase the dose gradient of radiotherapy to reduce the OAR limit, even achieve similar plan quality to Cybernifes system [15]. A number of retrospective studies, including studies by JCOG0701, Tosol Yu, Stokes, Stokes, and Tae Gyu Kim[1, 16-20], have confirmed that compared with the use of SF radiotherapy, the use of AF radiotherapy for large segmentation therapy can increase the LC rate of early glottic laryngeal cancer and provide a survival benefit. The results showed that the application of IMRT combined with the large segmentation method for radiotherapy is reliable [21]. Our study showed that the 3-year OS rates of the SF (n=17) group and the AF (n=74) group were 73.9% and 94.6%, respectively, p=0.007 (Figure 4). When acute and chronic side effects of the treatment were considered in this study, no grade 3 or higher toxic side effects were found, and there were no statistically significant differences between the radiotherapy technique groups [22]. Most of the data have compared with the results of conventional radiotherapy and laser surgery. Due to the improvement of radiotherapy technology and segmentation mode, we believe that the treatment options of T1 stage patients will be further adjusted.

This study has some limitations. First, as a retrospective, single-center study, there may be selection bias. Second, the VHI-30 scale was used to evaluate the impact of voice function. This scale is based on patient self-evaluation rather than a related examination evaluation, which may lead to overestimation of the effects of vocal function. Third, there were more stage T2 stage patients in the TLM group than in the EBRT group, and the effects of TLM may have been underestimated. Despite these limitations, this is a large-scale population study exploring the efficacy of radiotherapy and its effects on voice function in patients with early glottic laryngeal cancer; it has high value as a reference and offers guidance in selecting treatment for patients with early glottic laryngeal cancer.

This work was supported by the Ministry of Science and Technology of the People's Republic of China (grant number 2016YFC0105207) and National Natural Science Foundation of China (No. U19A2064).

The datasets used and analyzed during the current study are available from the corresponding author on reasonable request.

The Institutional Review Board (IRB) of Peking Union Medical College Hospital (PUMCH) reviewed the protocol. This is retrospective study. The protocol is rational and scientific. The study accords with principle of ethics.

This is a retrospective study and written human subject consent was unnecessary.