Purpose: The aberrant of fibroblast growth factors and their receptors (FGF/FGFR) is an emerging target in the treatment of solid tumors. This study aimed to explore the landscape of FGF/FGFR alterations in a large cohort of cancer patients.

Material and Methods: The formalin-fixed paraffin-embedded specimens of cancer patients who have underwent next-generation sequencing (NGS) from 2017 to 2019 in 3DMed Clinical Laboratory Inc. were included in this study.

Conclusion: FGF/FGFR alterations were widely occurred in cancer patients, and the mutational landscape may contribute to the further study design and development of FGF/FGFR inhibitors.

Fibroblast growth factor (FGF) receptors (FGFRs) are highly conserved transmembrane tyrosine kinase receptors (RTKs), which are crucial in a variety of physiological process, such as the regulation of development, differentiation, survival, and migration of cells. Upon the binding of FGF, FGFR kinases will be dimerized and autophosphorylated, thus activating multiple transduction pathways, including the Ras/mitogen-activated protein kinase (MAPK) pathway, the canonical and non-canonical Wnt pathway, and the phosphatidylinositol-4,5-bisphosphate 3-kinase (PI3K)-AKT pathway, which all play importantly roles in the cancer biological process [1-3]. The crosstalk between FGF/FGFR with the oncogenic pathways also provide a rationale for the therapeutic strategy for cancer treatment.

In tumor cells, aberrant FGFR signaling can be resulted from the amplification, fusion or missense mutations of FGF or FGFR family members, which are considered as promising targets for cancer treatment [4, 5]. In addition, FGF/FGFR signaling has been reported to be mediate resistance to oncotherapy including chemotherapy, radiotherapy and targeted therapy [6, 7]. Agents that target FGF/FGFR axis were shown to inhibit angiogenesis and sometimes reverse the acquired resistance of oncotherapy in various cancers [8-10]. Currently, more than one hundred clinical trials are ongoing in a variety of advanced cancers with aberrant FGF/FGFR signaling, including several basket trials in solid tumors. Currently, FDA has approved four multikinase inhibitors with FGFR as one of the targets, including ponatinib, regorafenib, pazopanib, and lenvatinib. In April 2019, the first pan-FGFR inhibitor erdafitinib was approved by FDA for the later-line treatment of locally advanced or metastatic urothelial carcinoma with FGFR2 or FGFR3 genetic alterations based on an ORR of 32.2% from BLC2001 study, a phase 2 trial (NCT02365597) [11, 12]. Most recently on April 17, 2020, pemigatinib, an selective inhibitor of FGFR isoforms 1, 2 and 3 got approval for FGFR2+ cholangiocarcinoma later line treatment upon the data from the FIGHT-202 study with an ORR of 36% [13]. In the present study, we aimed to investigate the spectrum of FGF/FGFR alterations in a large cohort of Chinese cancer patients through next-generation sequencing to aid the future study design and development of FGF/FGFR-inhibiting drugs.

The Formalin-Fixed Paraffin-Embedded (FFPE) specimens of solid tumor patients who have underwent next-generation sequencing (NGS) from 2017 to 2019 in 3DMed Clinical Laboratory Inc. were included. The diagnosis of the specimens was confirmed by hematoxylin and eosin (H&E) staining by an independent pathologist. The specimens were required to have a percentage of tumor cells over 20% and a size ≥1mm for further analysis.

FGF/FGFR genes in cancer patients. (A) Landscape of FGF/FGFR alterations across different cancer types. (B) Distribution of the mutated genes in FGF/FGFR. (C) The mutual exclusivity and co-occurrence relationship with the corresponding significances (D) among the pathway gene alterations. 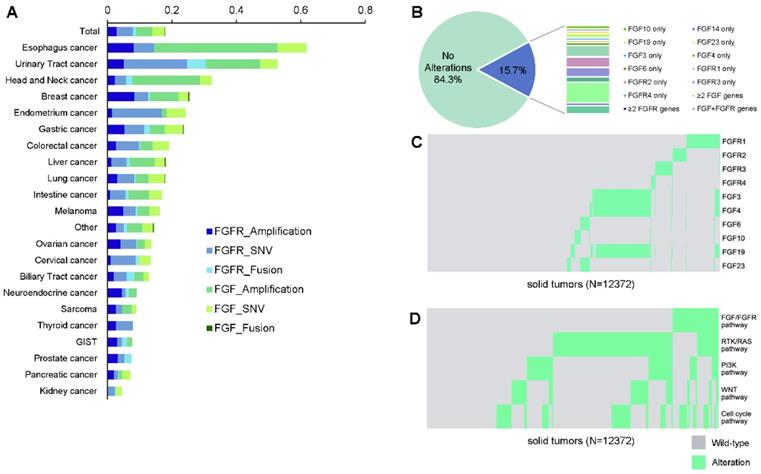 Distribution of patients with FGF/FGFR alterations across different tumor types.

The relationships between genetic alterations were investigated among FGF/FGFR genes. In brief, alterations in FGF3, FGF4, and FGF19 from 11q13 were mostly concomitant, and were partially co-occurred with FGFR1 alterations (Figure 1C). On the other side, most of the other FGF/FGFR genes were mutually exclusive, for example, the alterations of FGFR1, FGFR2, and FGFR3 (p<0.001). The mutual exclusivity and co-occurrence mutational pattern was mostly consistent when constrained to gene amplifications, with the co-occurring FGF3, FGF4, and FGF19 amplifications, and the widely observed mutual exclusivity across the other genes (data not shown). As the top frequent alterations in the overall population, amplifications in FGF3/4/19 (490, 4.0%) occurred the most in esophagus cancer (60/159, 37.7%), head and neck carcinoma (54/257, 21.0%), and urinary tract cancer (41/275, 14.9%), and were the least in pancreatic cancer (4/635, 0.6%), sarcoma (2/369, 0.5%), and ovarian cancer (1/293, 0.3%).

The recurring oncogenic FGF/FGFR mutations were detected in 15.7% cancer patients, including 7.2% with alterations in FGF genes, 7.0% in FGFR genes, and 1.5% in both FGF and FGFR genes, which is comparable to the previously reported 7% of FGFR alterations in the Caucasian cancer population [16]. The distribution of FGFR and FGF alterations were mostly comparable in each of the 20 tumors in the studied cohort, except the dominant FGF alterations observed in esophagus cancer and the dominant FGFR alterations in gynecologic cancer and prostate cancer. For FGFR signaling, the most affected cancer types in the Caucasian cancer population was reported in urothelial (32%), breast (18%), and endometrial and squamous cell lung (13% for each) [16], similar to those in the studied cohort as 30.5% in urothelial cancer, 16.9% in endometrium cancer, and 13.2% in breast cancer. However, the aberrant FGFR signaling was much more common in gastric cancer (19.4% vs 6.7%) and head and neck carcinoma (15.7% vs 4.6%) in Chinese versus Caucasian patients. With the striking results from the drugs targeting mutant FGF/FGFR in various cancer, non-selective FGF/FGFR inhibitors have been approved for cancer treatment, especially for tumors harboring aberrant FGFR2 or FGFR3 activations [11, 13]. Despite the recently reported disadvantages of a selective inhibitor of FGFR1, 2, and 3 in 22 cholangiocarcinoma patients with FGF/FGFR genetic alterations other than FGFR2 translocation from the interim results of flight-202 study [17], the encouraging efficacy of pan-FGFR inhibitor were reported in patients harboring these alterations with durable response [9]. In addition, the acquired resistance upon FGF/FGFR mutation for various conventional anti-tumor treatment largely impeded the continued treatment. Of note, amplifications in the 11q13 chromosome (including FGF3, FGF4, and FGF19), which was found to be negatively correlated with MSI-H in this study, was reported to be potentially associated with hyperprogression upon immune checkpoint inhibitors as observed in three out of four patients with lung cancer or esophageal adenocarcinoma [18]. Given the different agent sensitivities and efficacies towards various FGF/FGFR genetic alterations, the optimal development of FGF/FGFR axis-target agents required knowledge of the distribution and types of FGF/FGFR aberrations in a variety of cancer types.

There are several limitations in this study. Firstly, given the cross-sectional setting of this study, no treatment or survival data were available for the studied subset, and thus the association between FGF/FGFR alterations with clinical outcome cannot be assessed. Secondly, the cancer subtype was not further identified in the current study, which may lead to potential bias. Collectively, our study has provided valuable clues to the future clinical development, and further investigations are warranted for the clinical application of cancer treatment upon molecular profiling.

The study was approved by the Ethics Committee of The First Affiliated Hospital of Nanjing Medical University. All patients provided written informed consent. Patient identity protection was maintained throughout the study.

All patients signed informed consent regarding publishing their data.

The data that support the findings of this study are available from the corresponding author on reasonable request.