Background: Electrolyte disturbance and systemic inflammation contributes to poor prognosis of cancer patients. Levels of serum sodium and globulin can reflect electrolyte homeostasis and inflammatory state, respectively, therefore have potential as prognostic factors for cancer patients. In this study, we hypothesized that sodium to globulin ratio (SGR) could have superior accuracy in predicting cancer patient survival, than sodium and globulin alone. We therefore sought to investigate its efficacy in prognosis of patients with advanced gastric cancer (GC) receiving first-line chemotherapy.

Methods: A total of 265 patients, with advanced GC, were recruited in this retrospective study from January 2014 to January 2019. We first determined SGR cut-off values using the receiver operating characteristic (ROC) analysis, then analyzed the relationship between pretreatment SGR and clinicopathological features and the effect of chemotherapy. Finally, we evaluated progression-free survival (PFS) and overall survival (OS) rates of the entire and subgroup populations using univariate and multivariate logistic regressions.

Conclusions: Overall, our findings indicate that SGR is a novel and promising prognostic factor for GC patients. It has superior accuracy, to sodium and globulin alone, hence it is a powerful tool for evaluating effects of treatment, PFS, and OS in patients with advanced GC, who receive first-line chemotherapy.

Gastric cancer (GC), one of the most common malignancies, has been associated with high mortality rates [1]. Technological advancement in gastric cancer screening has significantly improved detection of early GC patients, resulting in a high (90%) five-year survival rate of early-stage GC patients, following curative treatment. However, for many patients with advanced stage GC, lack of or mild cancer symptoms at diagnosis, implies they cannot undergo curative resection. Despite numerous research efforts being directed towards development of various therapeutic strategies, the median survival rates for patients with advanced-stage GC remains at only 13 months[2]. To improve survival rates in this group of patients, it is imperative to identify novel and effective prognostic factors.

Previous studies have implicated various pathophysiological factors, such as electrolyte disturbance and systemic inflammation in poor outcomes of cancer patients [3-5]. In addition, serum sodium and globulin concentrations have been employed as biochemical indicators for routine laboratory tests. In fact, previous studies have shown that these indicators alone can objectively reflect electrolyte disturbance and inflammatory status of patients, thereby effectively predicting therapeutic response and prognosis of various tumors [6-9]. On the other hand, the ratio of sodium to globulin (SGR) may result in superior efficacy in predicting prognosis of cancer patients, than sodium and globulin alone. However, only a handful of studies have reported the use of SGR as a prognostic factor in cancer.

In this study, we evaluated the effect of SGR before first-line chemotherapy on treatment response, progression-free survival (PFS), and overall survival (OS) of patients with advanced GC.

A total of 265 advanced GC patients, who received first-line chemotherapy upon admission to the Cancer Hospital of China Medical University, were enrolled in the study between January 2014 to January 2019. Patients were only included if they met the following criteria: (1) gastric cancer was confirmed pathologically; (2) metastasis was confirmed in organs using computed tomography (CT), magnetic resonance imaging (MRI) scans, or other imaging methods; (3) patients' TNM staging indicated that all cases were stage III-IV; (4) subjects completed no less than two cycles of first-line chemotherapy after the diagnosis of the disease; (5) patients had no acute infection and received nutritional support; and (6) a majority of the patients were treated with a first-line cytotoxic drug: oxaliplatin, cisplatin, fluorouracil, and docetaxel. Ethical approval was obtained from the Cancer Hospital of China Medical University Ethics Committee, prior to conducting the study.

We used the Response Evaluation Criteria in Solid Tumors (RECIST 1.1) to estimate the chemotherapy response, every 2-3 cycles, and followed the patients until death or the end of the follow-up period; January 2020. The primary study endpoints were PFS and OS, whereas secondary endpoint was the disease control rate (DCR). PFS was defined as the interval between first-line chemotherapy and disease progression or the last follow-up time without progression, whereas OS was defined as the time between date of first-line chemotherapy and mortality or the end of follow-up. On the other hand, DCR was defined as the rate of complete response (CR), partial response (PR), and stable disease (SD).

Correlation between clinicopathological features and SGR

The median age of participants in our study cohort was 60 years, with 66.0% of all enrolled patients male. At the time of GC diagnosis, 33.6% of the patients had manifested metastases in more than one organ, 29.8% had developed peritoneal carcinomatosis, whereas 77.4% were found with stage IV gastric cancer. Analysis of the relationship between SGR levels and different patients' clinicopathological features revealed that those with low-SGR were more likely to have metastasis in no less than 2 organs (p = 0.007), peritoneal invasion (p < 0.001), higher neutrophil levels (p < 0.001) and CA72-4 (p = 0.014) (Table 1 and Figure 2). 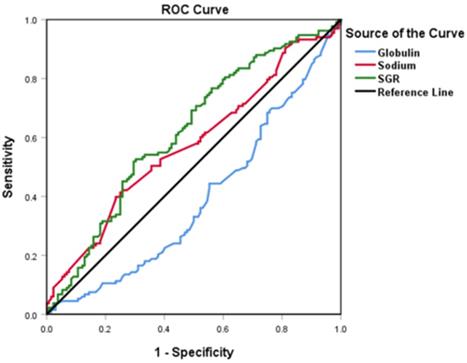 Relationship between the pretreatment SGR and clinicopathological features 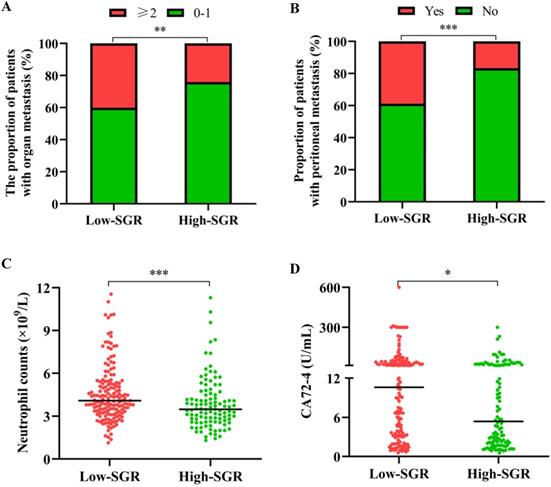 Relationship between SGR and response to first-line chemotherapy

Correlations between PFS and SGR and other clinicopathological factors

Correlations between OS and SGR and other clinicopathological factors

Kaplan-Meier curves of (A) progression-free survival and (B) overall survival according to the cut-off value of sodium to globulin ratio (SGR).

Numerous research efforts on prognostic cancer markers have generated a series of indicators for evaluating survival of patients with different tumors, such as gastric cancer [10-13]. Serum sodium and globulin concentration alone are cheap and readily available routine blood examination strategies that effectively reflect outcomes and survival rates of patients with diverse malignancies, including gastric cancer [8, 9, 14-17]. A combination of sodium and globulin, commonly termed sodium to globulin ratio, exhibits superior prognostic accuracy and precision relative to that of sodium and globulin alone. However, nothing is known regarding the relationship between SGR parameters and clinical outcomes. The current study, therefore, sought to validate SGR as a prognostic factor for cancer patients. To the best of our knowledge, this is the first study reporting that high-SGR GC patients, receiving first-line chemotherapy, have better DCR rates than low-SGR counterparts. This affirms the importance of SGR as an independent prognostic factor for PFS and OS in patients with advanced GC. In addition, our results revealed SGR was still a superior prognostic factor, owing to excellent prognosis, based on normal neutrophil counts, serum sodium and globulin level, and without peritoneal metastasis, in patients with advanced GC.

Electrolyte disturbance represents one of the complications for patients with malignancies. Previous studies have implicated sodium reduction in occurrence of this complication, which is associated with poor prognosis in cancer patients [3]. In addition, studies have shown that nearly 47% of patients with different malignant diseases exhibit a decrease in serum sodium levels, which is closely related to poor prognosis [6]. Functionally, abnormal functioning of several pumps or ion channels across various types of cancer could lead to disease development and progression [18]. For example, studies have reported an association between signal transduction of serum and glucocorticoid-induced protein kinase 1 (SGK1) with occurrence and progression of malignancies, including gastric cancer [19]. Similarly, a reduction in sodium levels was found to affect maintenance (or enhancement) of SGK1 signaling, indirectly maintaining the tumor-promoting activity of SGK1 [20]. In addition, several studies have demonstrated that Voltage-gated Na (+) channels (VGSC) implicated in the excitability and action potential conduction were involved in the progression of lung, prostate, breast and gastric cancers [21]. In addition, Carrie et al. [22] reported upregulation of VGSC in aggressive tumor cell lines, with its activation found to mediate the invasive potential of cancer cells. Recently, sodium was implicated in immune response processes. For example, Sodium-related receptor potential channels reportedly triggered T cell activation and innate response [23]. Previous studies have also shown that sodium impedes differentiation of macrophages into M2 subtypes with immunosuppressive characteristics, while promoting formation of anti-tumoral M1 phenotypic macrophages. Specifically, a decrease in sodium concentration resulted in production of more M2 macrophages and formation of an immunosuppressive microenvironment, which contributed to chemoresistance [24-28]. These findings indicate that chemotherapy may generate poor outcomes in GC patients with hyponatremia.

Kaplan-Meier curves describing survival for the cut-off value of sodium to globulin ratio (SGR) stratified by (A and B) no peritoneal metastasis, (C and D) normal neutrophil counts, (E and F) normal serum sodium level, and (G and H) normal serum globulin level. 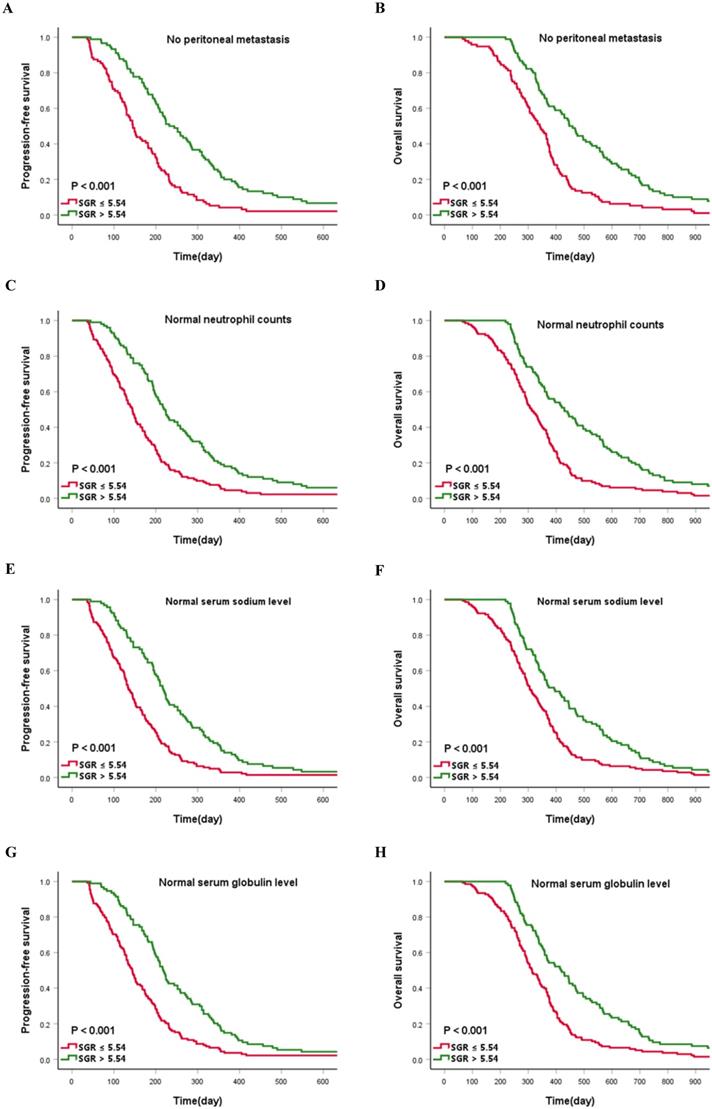 Abundance of inflammatory cells and their products in the tumor microenvironment has been described as the driving factor for formation and progression of tumors [29]. Similarly, an increase hepatocyte-derived globulin levels has been reported following inflammatory response [30]. Functionally, globulin contains most of the pro-inflammatory proteins, including alpha1-globulin, C-reactive protein (CRP), and complement 3 (C3). Several reports have shown that an abnormal increase in these biomarkers has profound negative effects on cancer patients. For example, Qu et al. [31] reported that higher serum α1-globulin was associated with higher pathological stage and poor tumor status. Consequently, serum α1-globulin was found to be an independent prognostic factor for short recurrence survival and overall survival in non-small cell lung cancer. Similarly, Allin et al. [32] showed that people with high CRP levels, across a general population, had a 1.3-fold higher risk of any type of cancer as well as a 2-fold higher risk of lung cancer. Among cancer patients, those with high CRP levels had 80% risk of premature death, whereas those with elevated CRP levels with invasive breast cancer had a 1.7-fold risk of tumor-related death. In addition, Shimura et al. [33] demonstrated that serum CRP levels, before chemotherapy, might be a potential prognostic factor for metastatic GC, whereas Boire et al. [34] reported upregulation of C3 in leptomeningeal metastatic models, a common fatal condition, and further proved that this was essential for the spread of cancer cells in the leptomeningeal space. The aberrant expression of C3 from cancer cells indicates the relapse of the leptomeninges, with blocking of C3 signal found to effectively inhibit leptomeningeal metastasis. A recent study on GC has shown that C3 deposited in the tumor microenvironment can independently activate the JAK2/STAT3 pathway, and promote tumor progression, indicating its potential as a prognostic factor for patients with gastric cancer [35].

Despite the potential for sodium and globulin alone as prognostic markers for patients with malignancies, these variables are easily influenced by fluid retention and body fluid loss. To circumvent this issue, we evaluated SGR and found it to be a more powerful prognostic factor than sodium and globulin alone owing to higher AUC and lower p values in the ROC curve. This possibly reduces the adverse effects of other pathophysiological situations thereby improving its prognostic accuracy.

To our knowledge, this is the first study implicating SGR as a prognostic marker for advanced GC patients. Our findings not only indicate the benefits of first-line chemotherapy, but also the survival of patients. Notably, SGR may still be an effective prognostic predictor for patients with relatively good clinical outcomes. Taken together, these findings are expected to improve prognosis of GC patients and elucidate the actual disease mechanisms. Moreover, our results are expected to guide clinicians during patient identification as well as development of appropriate treatment therapies.

The study had some limitations. Firstly, this was a retrospective study. A randomized controlled approach may be appropriately convincing. Secondly, only sodium and globulin, but not other indicators that contribute to electrolyte disturbance and systemic inflammation, were detected in this study. It is therefore not clear whether these are better prognostic factors. In future, longer follow-up times and detection indexes are needed to supplement these results. Thirdly, although we have described possible mechanisms of action that enable sodium and globulin to be used as prognostic factors in GC cancer patients, biological mechanisms underlying the prognostic role of electrolyte disorders and systemic inflammatory factors remain unknown. Further studies are therefore required on that front.

SGR, before first-line chemotherapy, is a cheap, universally available, and easily applicable marker that can effectively predict sensitivity to chemotherapy. This factor is also an independent and reliable prognostic factor for PFS and OS in patients with advanced GC.

18. Litan A, Langhans SA. Cancer as a channelopathy: ion channels and pumps in tumor development and progression. Frontiers in cellular neuroscience. 2015;9:86