Background: To evaluate the patterns of recurrence and survival related to deep stromal invasion (DSI) in cervical cancer patients who underwent the radical surgery.

Conclusions: This study indicated that the depth of deep stromal invasion is an important prognostic factor in patients with cervical cancer. Patients with full-thickness invasion should receive customized adjuvant treatment.

Cervical cancer is the 4th most common cancer-related death among all the female malignancies worldwide [1]. More than half a million women are newly diagnosed annually, and most cases occur in developing and undeveloped countries [2]. Each year, approximately a quarter of the new cases globally are diagnosed in China. For cervical cancer patients with International Federation of Gynaecology and Obstetrics (FIGO) stage IB-IIA, whose diseases clinically confined to the cervix and upper vagina, radical hysterectomy with pelvic lymphadenectomy is considered the standard treatment [3, 4]. The 5-year disease-free (DFS) survival was reported to be as high as 75% to 95%, which benefited from the presence of specific prognostic variables [5]. Some factors were identified before the operation, such as the palpable tumor volume and extension. After surgery, some important pathological variables were classified as the intermediate and high risk factors, such as tumor volume, lymphovascular space invasion (LVSI), deep stromal invasion (DSI), lymph node metastases, parametrial infiltration, surgical margin and/or positive parametrium, and warranted necessary adjuvant therapy [6-8]. However, even if some pathological variables were proved to have impact on survival, they are not incorporated in the staging system.

Adjuvant radiotherapy is recommended for the treatment of patients with intermediate or high-risk factors of the cervical cancer according to the National Comprehensive Cancer Network (NCCN) clinical guidelines [9]. However, one situation always encountered at clinical practice was that only one of the intermediate risk predictors, such as isolated DSI without positive LVSI and large tumor volume was presented. As middle or deep 1/3 of stromal invasion is considered the intermediate risk factor and parametrial involvement the high one, full-thickness stromal invasion lies conceptually between micro-invasive parametrial involvement and normal DSI. For these full-thickness invasion tumors, there is little evidence has been shown on the clinico-pathological characteristics as well as the prognostic information. Delgado et al. revealed the relationship between the relative risk of recurrence and the depth of stromal invasion, and found the disease-free survival was 94.1% for superficial third, 84.5% for middle third, and 73.6% for deep third invasion, respectively [3]. However, the management of tumors with full-thickness invasion is still treated as just middle or deep 1/3 of stromal invasion. Diseases with outer full-thickness invasion but without positive parametrial margin are also regarded as DSI, and no specific additional treatment is performed in these patients. Moon et al. found that post-operative radiotherapy improved pelvic control in patients with an isolated full-thickness stromal invasion [10]. Thus, the purpose of the present study was to evaluate the pattern of recurrence and survival related to different postoperative DSI in stages IB and IIA cervical cancer patients who underwent the radical surgery.

The medical records of 3,298 patients with FIGO (2009) stage IB - IIA were reviewed, and all the patients had undergone standard abdominal radical hysterectomy and pelvic lymph node dissection in the Department of Gynecologic Oncology, Fudan University Shanghai Cancer Center (China) between 2006 and 2014. The resection of para-aortic lymph node was performed if suspected para-aortic lymph node involvement was found before or during the operation, as well as the intraoperative fast frozen histology confirmed positive para-aortic or standard iliac lymph nodes. One gynecologic pathologist had reviewed each microscopic slide and a second experienced pathologist carried out confirmation. The inclusion criteria of the study were as follows: 1) post-operative histological confirmation of squamous carcinoma, adenocarcinoma and adenosquamous carcinoma; 2) post-operative histological confirmation of deep stromal invasion including middle or deep 1/3 of stromal invasion, full-thickness and outer full-thickness invasion; 3) no preoperative treatment including chemotherapy and radiotherapy; and 4) the compliance with strict follow-up visits in our center. Patients with past cancer history and preoperative diagnostic conization were excluded in this study. The study received approval (approval No.1910208-7) from the Ethics Committee at Fudan University Shanghai Cancer Center, Shanghai, China.

A diagnosis of recurrent lesion was made as new or progressive lesions confirmed by histologic and radiologic examination. Cases were further categorized into two groups according to the region of recurrent lesion: pelvic and extrapelvic recurrence.

Patients' clinicopathological characteristics and survival were compared using the χ2 test or Fisher's Exact Test for frequencies and the Mann-Whitney U test for continuous variables. The probabilities of DFS, OS were calculated using the Kaplan-Meier method, and the log-rank test was further used to compare survival curves. COX proportional hazards models were developed by forward, stepwise regression to identify independent predictors related to recurrence and survival. Statistical significance existed when P < 0.05. All analyses were carried out using SPSS software (release 17.0, SPSS Inc, Chicago, IL).

Association between DSI and the clinicopathological features

Survival and patterns of failure

Prognostic factors for DFS and OS 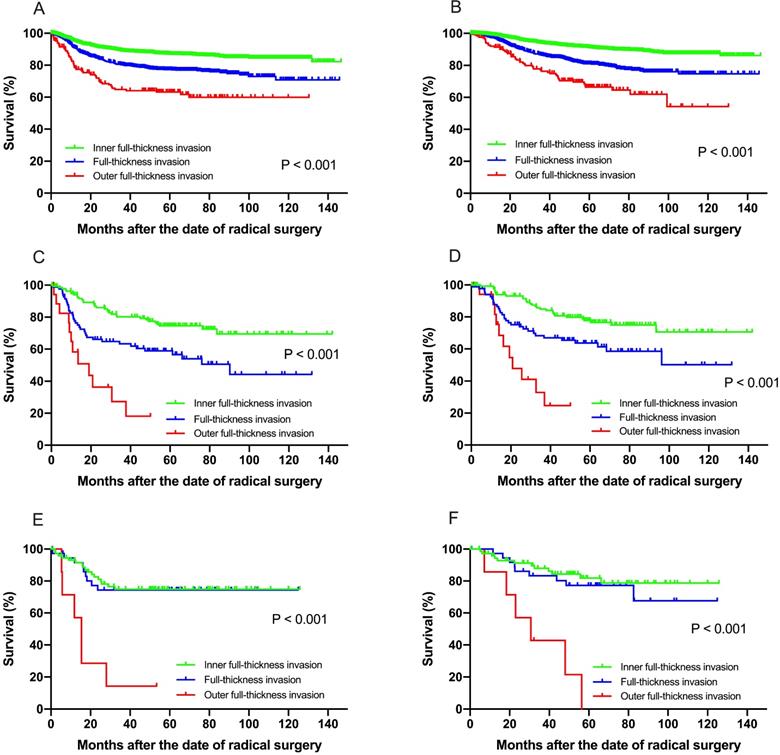 This study aimed to evaluate the different patterns of recurrence and survival related to subcategorization of DSI in cervical cancer patients who underwent the radical surgery, and to explore the optimal management for patients with ≥ full-thickness invasion after radical hysterectomy in stages IB - IIA cervical carcinoma.

Cervical cancer patients with some postoperative pathological findings of high-risk factors for recurrence are warranted necessary adjuvant treatment, which including positive lymph nodes, surgical margin and/or parametrial invasion [7, 11]. In addition, most majority of patients with early stage tumor present one or more intermediate-risk factors, including great tumor volume, LVSI, or DSI, which are closely related to recurrence. These patients are often advised to receive adjuvant pelvic radiotherapy. Deep stromal invasion, defined as the fractions of cervical wall thickness, is one of the intermediate risk factors often encountered in clinical settings. However, the criteria of depth of invasion is only expressed as inner third, middle third, and outer third of cervical wall thickness according to the Sedlis criteria [12]. Moreover, full-thickness or outer full-thickness invasion is one frequently encountered situation at clinical practice.

It has been reported that deep cervical invasion was strongly associated with a parametrial disease [13, 14]. Our findings in conjunction with the studies above clearly support the hypothesis that the tumor is getting close to spread to parametrium with the depth of invasion increases. Pathologically, it might be hypothesized that once the tumor spreads out of the whole cervical wall, the peritoneal layer covering the surface of the cervix is easily to be invaded. However, this pathologic risk factors could not be evaluated before surgery. Usually, invasive lesions in cervical cancer patients who presented visible lesions can be detected by colposcopy-guided biopsy methods. However, it was not possible for the physicians to collect enough tissues of specimens to evaluate the detailed depth of stromal invasion. Moreover, cervical biopsy and excision procedure specimens lack sufficient predictive value for the depth of stromal invasion in the final surgical specimens of cervical cancer patients [15]. Therefore, it seems reasonable that patients with full-thickness and even outer full-thickness invasion should be managed with a differential treatment, rather than the same treatment modality as middle third or outer third of stromal invasion diseases.

Despite the retrospective nature of the present study, a major strength of our study lies in that it is the largest study to date, particularly regarding DSI patients with cervical carcinoma, which could scarcely be available by prospective randomized controlled trials. The detailed DSI can be only reached by surgical results. The evaluation of cervical carcinoma with full-thickness stromal invasion by MRI examination was reported to be limited [20]. Since full-thickness invasion remains a common event in resectable cervical cancer, optimal treatment is eagerly awaited to improve the prognosis.

In conclusion, we have demonstrated that the DSI is an important prognostic factor in patients with cervical cancer. For patients with isolated full-thickness invasion without any other unfavorable pathological findings, adjuvant postoperative radiotherapy should be administered. We believe that the assessment of the status of full-thickness and outer full-thickness stromal invasion without positive parametrial margins is important in formulating the individualized management.

We thank all the faculty members in our department and all the patients, and their families involved in the current study.

The datasets supporting the conclusions of this article are included within the article. Any request of data and material may be sent to the corresponding author.