Schistosomiasis is a disease caused by parasitic flatworms (blood flukes) of the genus Schistosoma. Approximately 200 million people worldwide are infected with schistosomes, most of whom are children [1, 2]. Adult schistosome worms can escape the human immune system and colonize human blood vessels for prolonged periods. Furthermore, many schistosome eggs can be discharged and deposited in nearby tissues [3]. The incidence of schistosomiasis varies by region, and the incidence rate in developing countries is significantly higher compared to developed countries. In countries such as Africa, schistosomiasis is highly prevalent [4]. China is also a country with a high prevalence of schistosomiasis. According to reports in 2017, approximately 37,601 people were infected with schistosomal worms in China, which was 30.95% less than the number in 2016. The prevalence of schistosomal disease in China continues to decline, but a rebound in the incidence rates in some areas remains a risk [5].

CRC is a common malignant tumour. In China, the prevalence of CRC has been increasing and has become one of the leading causes of cancer deaths [6]. Significantly more male patients have CRC, and differences in CRC also exist between different regions [7]. Many risk factors for CRC in Asia, such as age, sex, family history and body fat, have been identified [8]. A relationship between schistosomiasis and CRC has been identified by researchers [9], and epidemiological data indicates that a close relationship exists between CRC and schistosomiasis [10]. Several studies suggest that long-standing schistosomal colitis is a key factor in the carcinogenic process [8]; however, the mechanism underlying the relationship between schistosomiasis and CRC has been poorly studied over the past few decades.

TAMs play an important role in the development of human cancer. TAMs are considered an important part of the tumour microenvironment [11]. TAMs can adapt to the stimulatory signals from various organisms by changing their phenotype and function. TAMs can be transformed into M1-type and M2-type TAMs. M1-type TAMs mainly play a role in promoting inflammation, killing bacteria and presenting antigens. In contrast, M2-type TAMs have an inhibitory effect on inflammation and have antiparasitic and tissue-repair effects [12]. Here, we investigated the regulation of intestinal TAMs in schistosomiasis CRC tissues.

Clinical data were obtained from patients who underwent radical resection at the First Affiliated Hospital of Wannan Medical College (Wuhu, P. R. China) from January 2012 to December 2018. Ethics approval was obtained from the Ethics Committee of the First Affiliated Hospital of Wannan Medical College, and informed consent was obtained from all subjects. A retrospective analysis of clinical pathology data of 3554 patients with CRC, including 265 cases of schistosomal and 3289 cases of non-schistosomal CRC, was performed. Logistic regression analysis was used to analyse the risk factors of CRC. At the same time, 43 patients with schistosomal CRC collected in 2012 and 57 non-schistosomal CRC patients obtained by stratified sampling according to their age and degree of differentiation were followed up by telephone to obtain patient data. Univariate and multivariate analyses were performed for the prognostic risk factors for overall survival (OS) in the follow-up patients. All schistosomal CRC patients were chronic schistosomiasis patients from schistosomiasis endemic areas. In the postoperative intestinal histopathological examination, schistosome eggs were found by microscopy. All CRC patients were confirmed by clinical and pathological tests, and patients with other malignant tumours were excluded.

Colorectal samples were fixed in 4% paraformaldehyde. Tissues were embedded in paraffin and cut into 4-μm sections. The sections were submerged in xylene at 40ºC for 30 min for deparaffinization. Deparaffinized tissues were dehydrated in a gradient of alcohol solutions (100%, 95%, 80% and 75%) for 1 min in each. The sections were washed in distilled water for 1 min and then stained with haematoxylin and eosin (HE). After washing three times in PBS for 3 min, the deparaffinized slides were submerged in 120℃ distilled water containing citrate (1: 100) or EDTA (1: 50) for 2 min and incubated for 20 min at room temperature for antigen retrieval. Endogenous peroxidase activity was blocked with 1.0% H2O2 for 10 min. The sections were incubated with mouse anti-human CD68 (KPI, ab955, Abcam), rabbit anti-human HLA-DR (EPR3692, ab92511, Abcam) and rabbit anti-human CD163 (EPR19518, ab182422, Abcam) monoclonal antibodies at 4°C overnight, followed by incubation with a secondary antibody (Max VisionTM HRP kit-5020, MXB, China). The HRP-conjugated secondary antibody was visualized by development with diaminobenzidine (DAB; DAB-0031/1031, MXB, China). All sections were counterstained with haematoxylin.

CD68 antibody-labelled mononuclear TAMs, CD163 antibody-labelled M2 TAMs, and HLA-DR antibody-labelled M1 TAMs were used in this study. M1 and M2 TAMs are two types of macrophages formed by mononuclear TAM polarization. The appearance of yellow-brown particles in the cell membrane or cytoplasm indicated a positive reaction. Under a 400x microscope, positive cells were counted in 5 randomly selected areas with the most positive cells, and the average value was obtained. The same tissue was marked by different antibodies, and the same 5 randomly selected areas were used for each antibody. The Trainable Weka Segmentation plug-in in ImageJ software was used to automatically count positive cells [13, 14], and the data were subjected to statistical analyses.

The data were analysed using SPSS software for Windows (version 20.0; IBM Corp, Armonk, NY, USA). The data are expressed as the frequency (n), percentage (%), mean ± standard deviation (SD) and quartile range. The measurement data were compared using Student's t-test and the Mann-Whitney U test. A chi-square test was used to compare categorical variables. A two-tailed P < 0.05 was considered significant. Continuous variables were analysed by Cox regression analysis. Every variable was analysed by univariate analysis to identify all potentially important predictors, and then variables with a P ≤ 0.20 in the univariate analysis were included in the multivariable analysis. A multivariable Cox regression analysis was performed to identify predictive factors for OS.

Univariate and multivariate analysis of the prognostic factors for OS

Expression of TAMs in different stages of intestinal tissue of schistosomiasis

Number of macrophages in schistosomal intestinal tissues at different stages

Schistosomiasis has a long history spanning more than 2100 years, as evidenced by the discovery of eggs in the liver of an ancient corpse. Schistosomiasis in China is mainly caused by S. japonicum infections [15]. Schistosomiasis is a chronic parasitic disease that is often neglected because it mainly affects poor rural communities in developing counties [16]. In recent years, several studies have suggested that the occurrence of CRC is associated with infections with bacteria [17, 18], parasites [19, 20] and other pathogens. 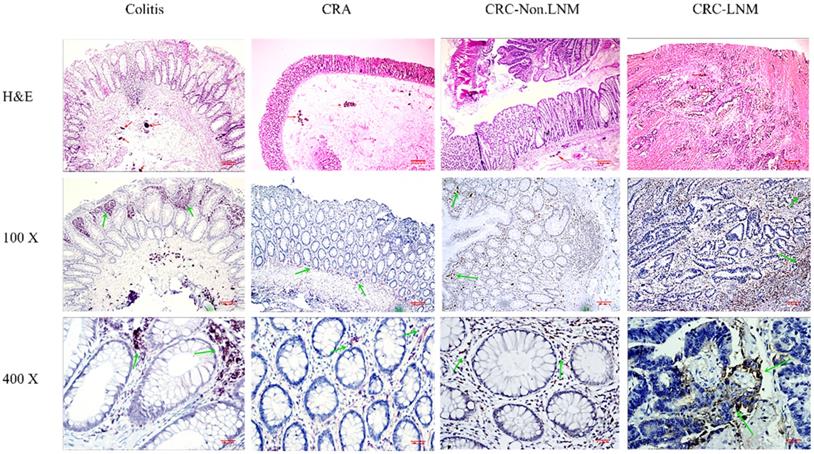 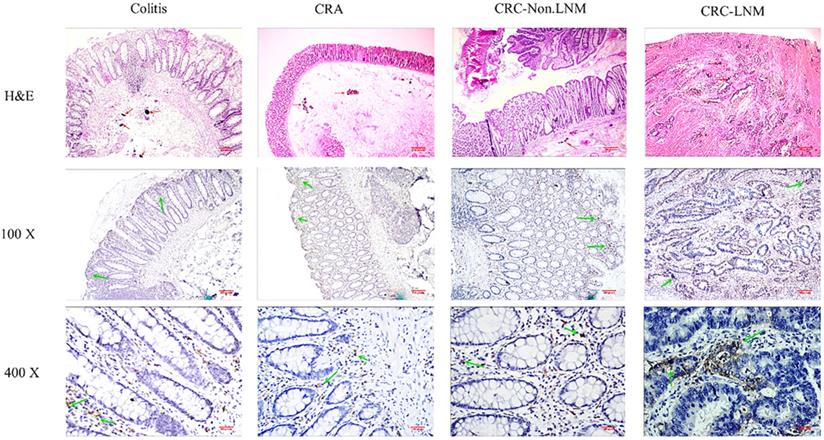 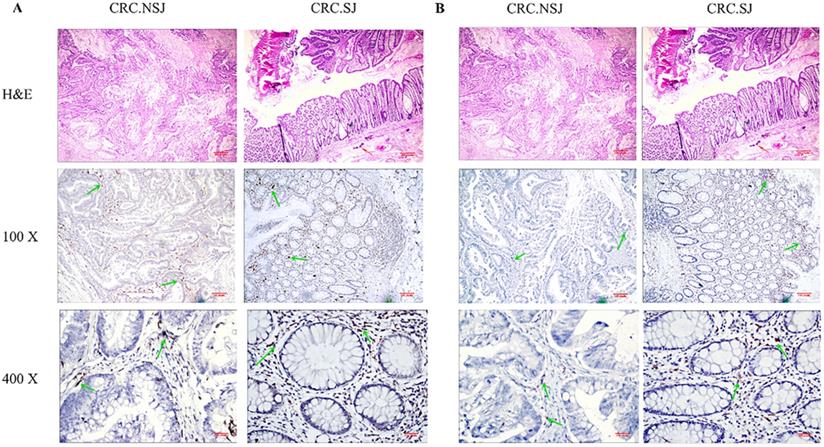 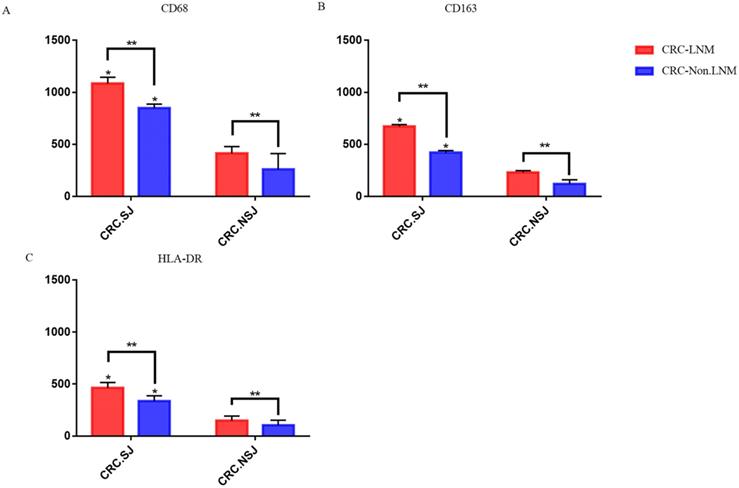 The immunohistochemical staining results indicated that the mean numbers of TAMs in patients with colitis were significantly higher than those in CRC patients, and the mean numbers of TAMs in patients with schistosomiasis were significantly higher than those in patients without schistosomiasis. The total number of TAMs significantly decreased from inflamed tissues to tumour tissues, which may be related to the pro-inflammatory function of M1 TAMs [31-36]. In summary, our data indicate that the decrease in TAMs is mainly caused by a decrease in M1 macrophages. With the progression of CRC, the number of TAMs rises significantly, especially M2 TAMs. TAMs polarization plays a pivotal role in the development of CRC in which M2 TAMs play a leading role. Schistosomiasis may alter the mechanism underlying the development and progression of CRC, leading to changes in its clinicopathological features and prognosis [37]. TAMs may play an important role in this process [38-42]. In this study, we found that the number of TAMs and the proportion of M2 TAMs in schistosomal CRC tissues were much higher than that in non-schistosomal CRC tissues; both differences were significant. Cortes-Selva D found that schistosomiasis can induce a strong Th2-biased immune response in the host and polarize macrophages into a broad M2 phenotype, consistent with the results reported here [43]. The number of TAMs continues to rise during tumour development, and the proportion of M2 macrophages increases significantly. As tumours develop, schistosomiasis may promote the polarization of TAMs to M2 TAMs. Gong W found that excretory-secretory (ES) antigens derived from S. japonicum eggs can activate macrophages, which exhibit M2 polarization [44]. TAMs polarization may be a potential mechanism for the development of schistosomal CRC. We also found that the number of TAMs in patients with lymph node metastases was significantly higher than that in patients without distant lymph node metastases. The schistosomal group was markedly different from the non-schistosomal group. Previous studies have found that a high density of TAMs in the margin of tumour invasion has a positive effect on the prognosis of patients with CRC, and a high density of M2 TAM infiltration in the tumour centre is a powerful indicator of poor prognosis [45]. TAMs are related to the development and prognosis of CRC [46, 47].

This work was supported by grants from The National Natural Science Foundation of China (grant no's. 30700694 and 81141083) and The Key University Science Research Project of Anhui Province, WuHu city (grant no. KJ2014A271).

This study was approved by The First Affiliated Yijishan Hospital of Wannan Medical College (Wuhu, China) and conforms to the provisions of the Declaration of Helsinki. Written informed consent was obtained from all included patients.

10. MG C. Assessment of morbidity due to Schistosoma japonicum infection in China. Infectious diseases of poverty. 2014;3:6

34. Mantovani A, Sica A, Sozzani S. et al. The chemokine system in diverse forms of macrophage activation and polarization. Trends in Immunology. 2004;25:677-686