Gastric cancer remains one of the most prolific cancers worldwide [1]. Although gastric cancer is characterized by highly heterogeneous tumors, it can generally be classified into two types, intestinal and diffuse according to the Lauren classification system [2]. Despite advances in treatment, the prognosis of patients with advanced gastric cancer, especially diffuse-type gastric cancers, which are often characterized by robust fibrosis, remains poor [3]. Cancer-associated fibroblasts facilitate its progression by secreting a variety of soluble factors via direct cancer-stromal interactions. Therefore, cancer stromal fibrosis could be a novel target in the treatment of patients with various malignant tumors, including gastric cancer [4, 5].

Recent studies have described an inhibitory effect mediated by the adiponectin paralog protein CTRP6 [C1q/TNF-related protein 6, also known as C1qTNF6; gene symbol CTRP6] on inflammation [6] and inflammation-related fibrosis in several organs, including cardiac fibrosis [7], dermal fibrosis [8], and renal fibrosis [9]. However, it was unclear whether CTRP6 would have any anti-fibrotic activity in the cancer stroma.

After receiving the approval of the Institutional Review Board of the Gifu University Graduate School of Medicine (specific approval numbers: 2019-202) to carry out our retrospective study, we collected consecutive 49 specimens from surgically treated patients between January 2005 and December 2011, at Gifu University Hospital, who were primarily diagnosed with diffuse-type gastric cancer. Informed consent was obtained from all participants or their authorized representatives. This study was conducted in accordance with the ethical standards outlined in the 1975 Helsinki Declaration.

We expressed the immunohistochemical staining results as a percentage, calculated from the proportion of immunoreactive gastric adenocarcinoma cells relative to the total number of cells. The proportion of positive cells was determined by scoring 10 high-magnification fields of view (400× through the most superficial to the deepest layers of the main invasion areas) for each sample. The staining was considered negative if less than 10% of the cancer cells exhibited immunoreactivity and positive if over 10% were immunoreactive.

The expression of each target gene was analyzed using the 2-ΔΔCT method [18] embedded in the LightCycler system. ΔCT values for each gene of interest were normalized to the GAPDH values for each triplicate. Standard deviations were then calculated for each triplicate, and the fold change for each of the three target genes was recorded. The value for each of the groups (n = 3) was calculated as the fold change relative to the mean value for the control siRNA-treated group (control set to 1.0).

Cell proliferation was evaluated by counting the number of viable cells as previously described [11]. Briefly, 0.5 × 104 cells were cultured in tissue culture dishes with or without recombinant CTRP6 in triplicate. After 24, 48, and 72 h, the viable cells were counted. The assay was conducted in triplicate and repeated twice.

The invasiveness of the cultured cells was determined using 24-well BD BioCoat Matrigel Invasion Chamber Plates (BD Falcon, Bedford, MA) according to the manufacturer's protocol as previously described [11]. Briefly, 1 × 104 cells were added to the upper compartment of the invasion chamber with or without recombinant CTRP6. After incubation for 24, 48, and 72 h in DMEM containing 10% (lower chamber) or 0% (upper chamber) FBS, non-invading cells were gently removed from the filter by scrubbing with a cotton-tipped swab. The cells on the lower surface of the filter were counted using a microscope. These experiments were performed in triplicate and repeated twice. The mean and standard deviation values were calculated.

Representative results of the immunohistochemical staining are shown in Fig. 1. Limited CTRP6 expression was observed in non-tumorous gastric epithelial cells. Although CTRP6 immunoreactivity was found focally in 23 of the 49 invasive cancer samples (Fig. 1A, B, and D), CTRP6 immunoreactivity was lost in the invasion front cells in the tissue specimens examined here (Fig. 1C and E). 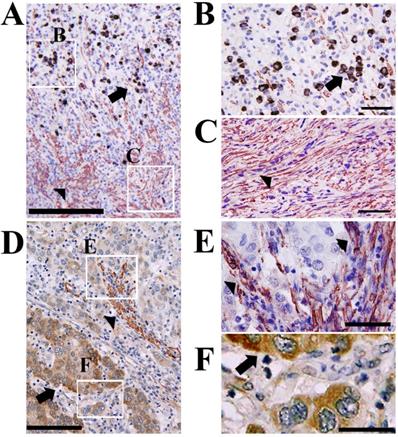 According to Lauren's criteria, gastric cancer is classified into two main types: Intestinal and diffuse [2]. Previously, Qu et al. reported that CTRP6‑knockdown decreased the growth of an AGS cell line [22] that is commonly used to study intestinal type gastric cancer phenotypes [23]. By contrast, this study demonstrated that the addition of recombinant CTRP6 did not alter the cell growth or Matrigel-invasion activity of diffuse-type gastric cancer cells. 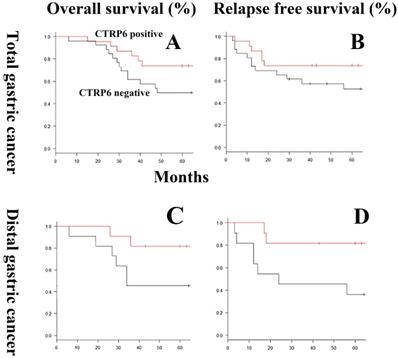 Univariate and Multivariate analyses of risk factors for survival

Combined with the findings of Qu et al. [22], elimination of endogenous CTRP6 may abrogate the progression of gastric cancer, whereas exogenous overload of CTRP6 might have little effect on non-tumorous or cancerous gastric epithelial cells themselves. Furthermore, we found that CTRP6 immunoreactivity correlated with favorable survival outcomes, in terms of both overall and relapse-free survival rates, but this trend did not reach significance (P = 0.15). This may reflect the pleiotropic pathobiological property of CTRP6 in gastric cancer cells, themselves, and in cancer-stromal microenvironments. This observation requires further extensive studies that aim to elucidate the pathobiological properties of CTRP6 in gastric cancer cells.

CTRP6 significantly suppresses α-sma expression in cultured fibroblasts. Administration of both 1.0 and 10 µg/mL CTRP6 significantly reduced α-sma expression at the transcript (A) and protein level (B-F) at 72 h (A and F: P < 0.01). (A) Representative data of the quantitative RT-PCR assay. The value for each group (n = 3) was calculated as the fold change relative to the mean value for the control group (control set to 1.0), which represents the α-sma transcription induced by TGF-β without CTRP6. (B-D) Immunofluorescence assays demonstrated that α-sma (green staining; Alexa Fluor 488) was expressed in the cytoplasm of fibroblasts (indicated by arrow) treated with TGF-β (C), but not found in fibroblasts without TGF-β (B). CTRP6 (1.0 µg/mL) attenuated TGF-β induced α-sma expression in cultured fibroblasts (D). Scale bar, 20 µm. (E and F) Immunoblots revealed an α-sma positive band when fibroblasts were treated with TGF-β. By contrast, α-sma band was observed to a lesser extent in fibroblasts that were treated with both TGF-β and CTRP6. The intensity of the GAPDH reference did not change. Semi quantitative analysis was performed as described in the Materials and methods. The intensity ratio of each band relative to GAPDH is shown. The CTRP6/GAPDH ratio was 0.11 (Mock), 0.02 (1.0 µg/mL CTRP6 treated group), and 0.018 (10 µg/mL CTRP6 treated group). 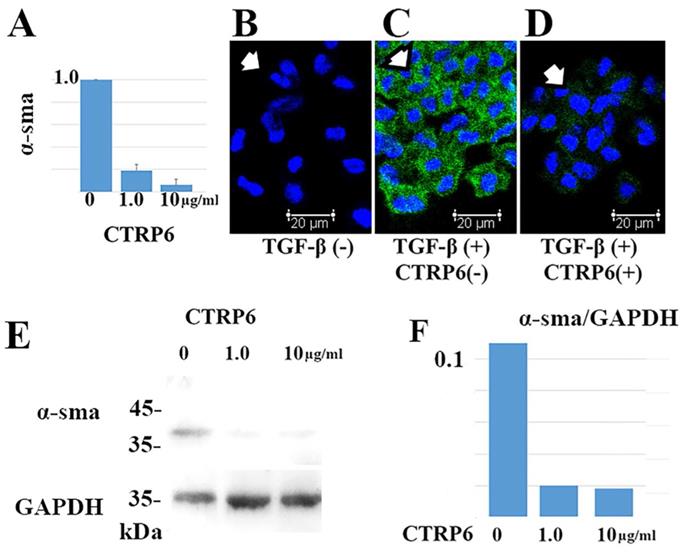 Notably, recent independent cohorts that are publicly available in Kaplan-Meier plotter database (http://kmplot.com/analysis/index.php?p=service&cancer=gastric) reveal that “high CTRP6 mRNA expression” is more common in patients who experience a favorable outcome, although this trend does not reach statistical significance (P = 0.33). The patients who were included in this analysis were diagnosed with diffuse-type and poorly differentiated gastric cancer and were treated by surgical resection. However, information concerning cancer location, i.e. proximal or distal site, is not available in this database.

The IntAct (https://www.ebi.ac.uk/intact/) interaction database suggests a putative interaction between CTRP6 and protein of human promyelocytic leukemia (PML), based on an anti-tag coimmunoprecipitation assay. The BioGrid interaction database (https://thebiogrid.org/interaction) also indicates an interaction between CTRP6 and PML protein, through yeast-two hybrid screening. Recent studies have demonstrated that PML protein plays an important role in fibrosis, i.e. TGF β-induced fibroblast-to-myofibroblast differentiation [26, 27]. Although this finding needs to be verified through further extensive studies, we hypothesize that CTRP6 may attenuate PML protein-related fibrosis in cancer-stromal microenvironments. 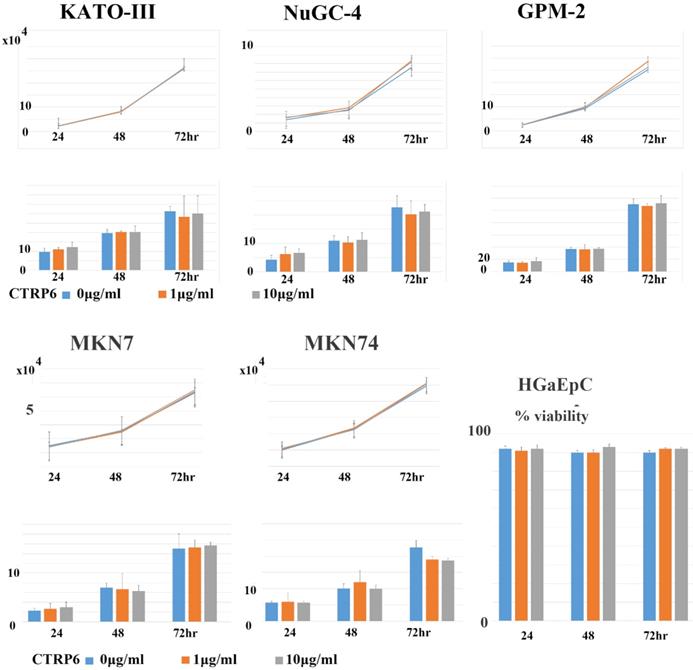 In conclusion, this study revealed that CTRP6 may act as an antagonist to cancer stromal fibrosis in diffuse-type gastric cancer at the cancer invasion front.

The authors wish to thank Ms. Masako Azuma for her technical assistance.

This study was supported by grants from the Ministry of Education of Japan (grant no's. 20K07406).

Informed consent was obtained from all the study participants or their authorized representatives. The study was conducted in accordance with the ethical standards set out in the 1975 Helsinki Declaration. This study was approved by the Institutional Review Board of the Gifu University Graduate School of Medicine (specific approval numbers: 2019-202).