Backgroud: Keratin 19 (KRT19) is the intermediate filament that constitutes the cytoskeleton and regulates cell-cycle and cell death.

Objective: We aimed to assess whether KRT19 was involved in lung cancer development.

Methods: The expression of KRT19 in lung cancer was evaluated from mRNA expression on open databse and protein abundance on tumor tissue array.

There is an urgent need for a highly reproducible, inexpensive biomarker, which might help to identify patients at high risk for disease-progression, recurrence, metastasis and death [7]. Hence, we analyzed gene expression pattern in publicly available cohorts of lung cancer patients and identified a signature of genes which might be involved in lung cancer development and prognosis of patients. Among the identified genes, KRT19 is a member of the keratin family, which is responsible for the structural integrity of epithelial cells, including bronchial epithelial cells [8, 9]. KRT19 expresses in normal lung tissue, as well as lung cancer tissues [10]. However, when necrosis occurs within the lung tumor, KRT19 degrades and fragments are released into the blood. This leads to an increase of the blood CYFRA 21-1 level [11, 12]. Hence, the serum level of KRT19 fragments could be applied in the clinic as a tumor marker.

In order to determine whether genes were differentially expressed between primary lung tumor and normal lung tissue, differential gene expression analysis was performed by the SAM method using histological type as the variable [17]. Gene lists were created using a cut-off of Q <0.05, >1.5-fold change. The raw data for differential expression analysis are available at ArrayExpress (http://www.ebi.ac.uk/arrayexpress/) with accession number E-GEOD-18842 and E-GEOD-27262.

Six other independent datasets, available through the Gene Expression Omnibus (GEO) database in public repositories and containing gene expression and clinical data, were analyzed to evaluate the expression and prognosis of the biomarkers (GSE31210, GSE32863, GSE19188, GSE3141, GSE14814, GSE30219) [18].

The Student's t-test and one-way ANOVA were applied to evaluate the differences in groups as appropriate and the significance level was set at 0.05. For the univariate analysis, patients' clinical end points were calculated using the Kaplan-Meier method and compared by the log-rank test. Forward stepwise multivariate Cox proportion hazard analysis was performed to determine the influence of age, gender, histologic subtype and TNM stage on overall survival (OS). Hazard ratios (HRs) with corresponding 95% confidence intervals (CIs) were estimated from the Cox analysis. We also employed Harrell's concordance index (C-index) to assess the model's prognostic accuracy in the multivariate analysis. A two-sided P<0.05 was considered statistically significant. All statistical analyses were performed with R, version 3.6.2 (http://www.r-project.org/).

Then, we evaluated KRT19 transcript levels in microarrays downloaded from ArrayExpress dataset. In accordance with previous conclusion, the relative abundance of KRT19 mRNA increased 2- to 3-fold when normal tissue transformed into tumor (t-test, p<0.001) (Figure 1A-C). 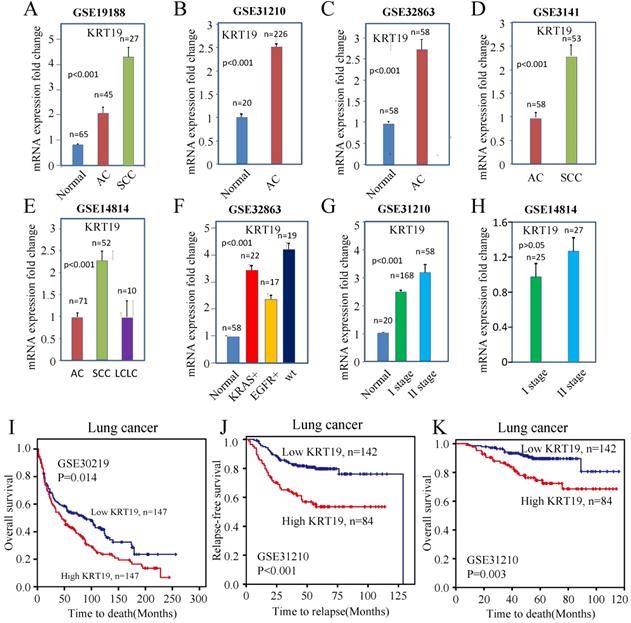 To investigate the association between the KRT19 with distinct lung cancer subtypes, we compared KRT19 expression with subtypes of lung cancer in microarrays. The expression of KRT19 was higher in SCC than in AC and LCLC (Figure 1D-E). In addition, KRT19 mRNA was increased about 2-fold in wild type (wt) lung cancer compared with EGFR mutated lung cancer, suggesting that EGFR pathway might affect KRT19 gene expression (Figure 1F).

In order to test whether KRT19 is associated with lung cancer progression, we examined the association of KRT19 expression with TNM staging. An increased expression of KRT19 was correlated with higher TNM stage (Figure 1G-H). These analyses indicated that KRT19 could be a tumor marker for diagnosis of lung cancer, especially of SCC.

In order to further explore the role of KRT19 in lung cancer, we analyzed KRT19 protein levels in a TMA containing 69 informative patients with distinct histological subtypes and additional normal lung tissues. KRT19 protein was predominantly detected in the cytoplasm, and representative images of immunohistochemical staining for noncancerous and cancerous tissue are shown in Figure 2A. We examined the potential association of KRT19 expression with the clinicopathological parameters by using quantitative criteria (Table 2). Statistical significance was found for KRT19 expression in AC, SCC and SCLC (f-test, p<0.001). Importantly, KRT19 was significantly overexpressed in SCC compared with AC (t-test, p=0.039). Immunohistochemical staining confirmed that KRT19 expression was high in lung tumor, especially in SCC (Figure 2B-C).

Association between biomarker expression and clinicopathological characteristics in TMA (LC811)

To understand the value of KRT19 in the prediction of ACs' prognosis, we examined expression of KRT19 in the other tissue microarray, which provided survival data. The profiles of KRT19 of two representative cases were shown in Figure 3A. Case1 had the longest survival and case2 had shortest survival in this cohort. Intriguinly, expression of KRT19 was strongly correlated with the tumor T stage (Figure 3B). However, segregation of the patients into KRT19-high and low expression groups did not reveal significant relationship with clinicopathological parameters of sex, age, tumor size, location, grade (Table 3). We also investigated the association between cumulative overall survival-rates and clinicopathological factors by univariate and multivariate Cox regression analysis. As shown in Table 4, tumor size was prognostic factor for OS, whereas other clinicopathological factors were not directly related to the clinical outcome of AC. Besides, KRT19 expression was not correlated with OS in AC (Figure 3C). 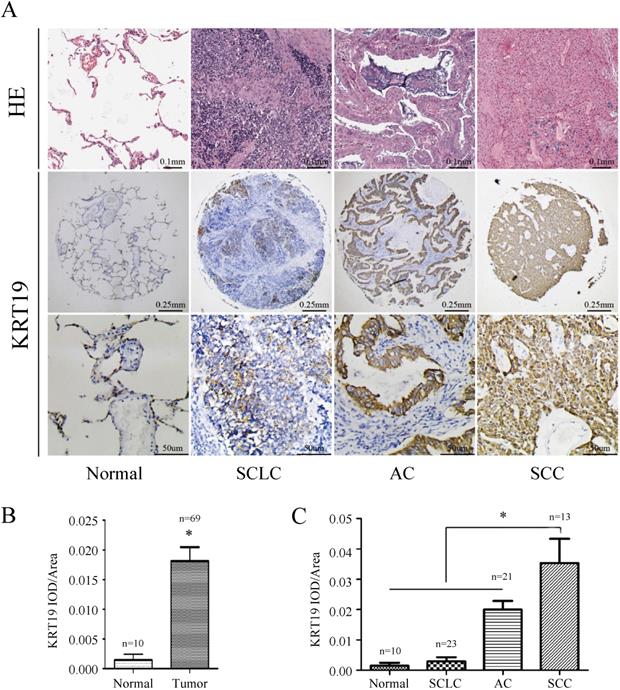 Immunohistochemistry analysis of KRT19 in AC patients. In a five years cohort, representative images of the cancerous and adjacent tissue from the longest survival patient and the shortest one were shown by using HE and IHC staining (A). The quantification of KRT19 expression in different stages was displayed as mean ± SE (B). Kaplan-Meier survival curve of KRT19 (C) was also analyzed. 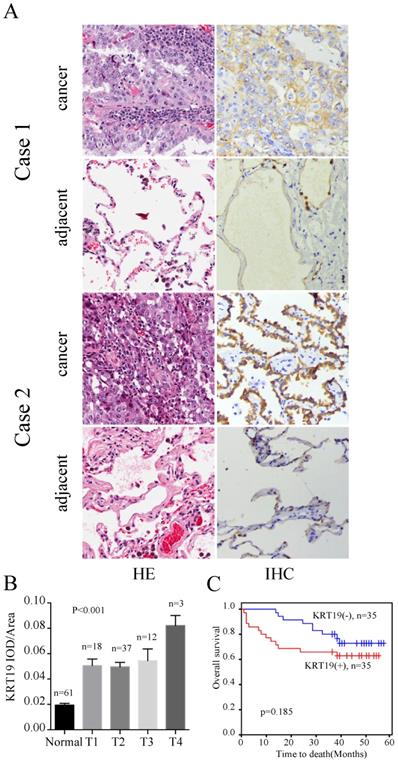 To further explore the prognostic role of KRT19 in SCC, we employed another tissue microarray containing 70 SCC patients with complete survival data and detailed information about Ki-67 expression. The profiles of KRT19 and Ki-67 of three representative cases were shown in Figure 4A, which showed the positive correlation between KRT19 and Ki-67. In comparison of early-stage lung cancer tissue, the majorty of late-stage lung cancer samples showed increased expression of KRT19 and Ki-67 in this five years cohort (Figure 4B-C). Segregation of these patients into KRT19-high and low expression groups did not reveal significant relationship with clinicopathological parameters of sex, age, tumor size, location, but noticeably associated with tumor grading, TNM staging (Table 5). Univariate and multivariate Cox regression analysis were perfomed to analyze the association between overall survival-rates and clinicopathological factors. Age, TNM stage, Ki-67 and KRT19 were prognostic factors for OS, whereas other clinicopathological factors were not directly related to the clinical outcomes of SCC (Table 6). Two representative cases of the longest survival patient and the shortest survival patient were shown in Figure 5A. As expected, high expression of KRT19 and Ki-67 tended to predict worse clinical outcome (Kaplan Meier log-rank test, p=0.022; p=0.002). Combined examination of KRT19 with Ki-67 would provide more precise information for the clinical outcome of SCC patients. We performed the forward variable-selection procedure using the two factors and patients characterized by low levels of KRT19 and Ki-67 had the longest OS in this study (Kaplan Meier log-rank test, p<0.001).

Immunohistochemistry analysis of KRT19 in SCC tissues. In a five years cohort, representative images of KRT19 expression in normal lung tissue and SCC were shown (A) with quantitative result displayed as mean ± SE (B-C). 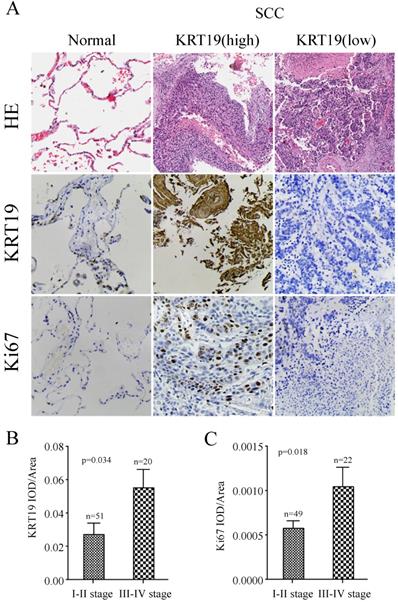 KRT19 is an independent prognostic factor of overall survival in SCC patients. In a five years cohort, representative images of the cancerous and adjacent tissue from the longest survival patient and the shortest one were shown by using HE and IHC staining (A). Kaplan-Meier survival curve of KRT19 alone or in combination with Ki-67was also analyzed (B). 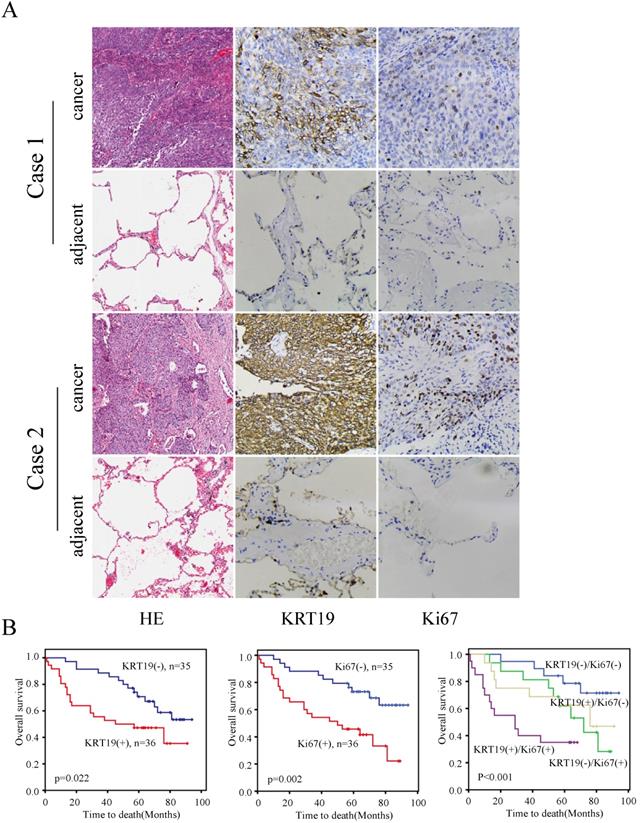 KRTs are intermediate filament proteins that constitute the cytoskeleton and regulate cell-cycle, apoptosis, cellular response to stress and death through dynamic interactions with a range of cellular proteins, including kinases, receptors, adaptors, and effectors [22]. There are 20 types of KRTs, as classified by the molecular weight and isoelectric point. These KRTs are categorized to 2 subtypes: low-molecular weight acidic type I and high-molecular weight basic or neutral type II [23]. KRT19 is the smallest (40 kDa) known type I KRTs and has been related to some diseases [24]. In a mouse model, knockdown of KRT19 caused skeletal myopathy via mitochondrial and sarcolemmal reorganization [25]. Subsequently, KRT19 was identified as tumor-associated biomarker in various cancers, including esophageal squamous cell carcinoma, cervical cancer, breast cancer and HCC [26-29]. Gene amplification of KRT19 was found in HER2-positive breast tumor, indicating a relationship between KRT19 and HER2 [30]. Then, it was found that KRT19 could interact with HER2 on the cell membrane and stabilize HER2. However, inhibition of KRT19 downregulated HER2 by increased ubiquitination and destabilization of HER2, and reduced cell viability [31]. MicroRNA-492, originated from KRT19, showed significant association with the liver enzyme BAAT and was overexpressed in metastatic hepatoblastoma (HB) [32]. In addition, it was found that KRT19 correlated with tumor size, tumor differentiation, metastasis and micovascular invasion of HCC. Mechanically, KRT19 increased invasiveness and induced chemoresistance in HCC cells [33]. Furthermore, expression of KRT19 was associated with survival of HCC patients [34].

Importantly, KRT19 can be used as a molecular marker for reverse transcriptase PCR (RT-PCR) and ELISA-mediated detection of disseminated tumor cells in regional lymph nodes (LNs), peripheral blood (PB) and bone marrow from susceptible cancerous patients [12, 35-36]. Recently, KRT19 was also used as a novel marker by circulated tumor cells (CTC) detection to identify tumor cells in breast cancer and colorectal cancer [37-39], and its positivity was demonstrated to be a prognostic indicator [40]. However, KRT19 has not been well characterized in lung cancer, specifically with regard to the prognostic value. Our study has found that KRT19 is associated with clinical progression and is predictive of clinical outcomes in lung cancer as a whole in gene transcription and protein expression level.

Using microarray gene expression datasets and differential expression analysis, KRT19 was found to overexpress in lung cancer compared with normal tissue. Moreover, KRT19 mRNA was significantly associated with the presence of SCC, EGFR wt lung cancer, higher stage and shorter survival time of lung cancer patients. It was reported that serum level of KRT19 was associated with the efficacy of EGFR-TKI treatment in NSCLC harboring EGFR mutation, and that patients with high KRT19 responded poorly to EGFR-TKI, leading to a shorter survival time [41]. As KRT19 represents the extent of the EGFR wt component in lung tumor, EGFR-TKI's efficacy in NSCLC is poor in high serum KRT19 group compared with normal serum KRT19 group. Our study confirmed the difference of KRT19 expression in different molecular phenotype of lung cancer. As KRT19 correlated with EGFR wt lung cancer, KRT19 may be a valuable predictive marker for EGFR-TKI use. Further clinical trials are needed to validate the significance of KRT19 in EGFR mutated patients.

We also employed tissue microarray to validate the value of KRT19 in protein level. Distinguishing SCC from AC could provide better treatment decisions. However, the histological classification mainly depended on biopsy. In addition, biopsy occasionally leads to controversial diagnosis in lung cancer for the inherent histologic heterogeneity that exists in a subset of lung cancer [42]. Our data indicated that KRT19 levels were much higher in SCC than in AC, and KRT19 showed the strongest correlation with stage and grade in SCC. Liquid bead array hybridization assay has been applied as a predictive and prognostic index of cancer patients and guiding clinical treatment, making KRT19 based CTC a promising diagnostic method for SCC. We speculated that interaction between KRT19 and other proteins including cell proliferatin marker Ki-67, initiated signaling cascades that promoted tumorigenesis, tumor invasion and metastasis. Rencently, KRT19 was found to interact with β-catenin/RAC1 complex and regulated NUMB and Notch1 expression, leading to the enhancement of the cancer stem-like cell properties in breast cancer [43]. Furthemore, KRT19 expression was identified as an independent prognostic factor for the overall survival for SCC patients. Hence, the function of KRT19 in SCC is remarkable, and it would be interesting to explore the underlying mechanisms in detail.