Background: Multiple anti-PD-1/PD-L1 antibodies have been approved, and in some diseases, there is a choice of more than one. Comparative efficacy, safety and tolerability are unknown.

Methods: Randomized trials (RCTs) supporting the registration of single agent anti-PD1 or anti-PDL1 inhibitors between 2015-2019 were identified. We extracted the hazard ratio (HR) for overall survival (OS) and calculated the odds ratio (OR) for commonly reported safety and tolerability outcomes. We then performed a network meta-analysis, reporting multiple pair-wise comparisons between different anti-PD-1/PD-L1 antibodies.

Over the past decade, numerous randomized controlled trials (RCTs) of immune checkpoint inhibitors (ICIs) have been performed. Compared to standard of care, ICIs, targeting the programed death receptor-1 (PD-1) or its ligand (PD-L1), have been shown to be an efficacious therapeutic tool in several cancer sites. Additionally, these drugs have a generally favourable safety profile as compared to conventional treatment [1]. As a result, multiple anti-PD-1/PD-L1 drugs have been approved in cancer and are in routine use.

Here, we report on a network meta-analysis comparing different anti-PD-1/PD-L1 antibodies, across different disease sites, aiming to provide a more clear understanding of the differential efficacy and toxicity of these agents.

Drug@FDA was used to identify FDA approved indications of anti-PD-1/PD-L1 antibodies, up to February 2020, (including pembrolizumab, nivolumab, cemiplimab, atezolizumab, avelumab and durvalumab). RCTs supporting the registration of anti-PD-1/PD-L1 antibodies were identified using a search of MEDLINE (host: PubMed) using the drug name and the approved indications as keywords. RCTs that studied anti-PD-1/PD-L1 antibodies in combination with other therapeutic agents such as chemotherapy, targeted therapy or radiotherapy were excluded, as were trials of anti-cytotoxic-T-lymphocytes-associated protein 4 (CTLA-4) monoclonal antibodies. When duplicates of RCTs were identified, we included the most recent report for both efficacy and safety (noting that these reports may not have been the same). When approval was based on subgroups defined by PDL-1 status, we compared efficacy outcomes in the subgroup for which approval was achieved (if applicable). Safety and tolerability were based on all trial participants exposed to treatment (per protocol analyses). We only included trials where more than one anti-PD-1/PDL-1 antibody were approved for the same indication in one disease site, to initiate a clinically and statistically meaningful head to head efficacy and safety comparisons between at least two anti-PD-1/PDL-1. Pembrolizumab was approved for 15 disease site, in some disease sites it was approved for use in multiple settings (adjuvant and palliative). Nivolumab, atezolizumab, durvalumab and cemiplimab was approved for several disease sites in different indications. However, Advanced NSCLC, both in first line and second line palliative treatment, (pembrolizumab, nivolumab and atezolizumab), metastatic HNSCC as first line palliative treatment (pembrolizumab and nivolumab), Metastatic urothelial cancer, as in second line palliative therapy, (nivolumab and atezolizumab), and metastatic melanoma, as in first line treatment, (pembrolizumab and nivolumab) appeared to be the only indications where, two or more anti-PD-1/PDL-1 antibodies were approved as in monotherapy use. Please see Table-1 for complete list of FDA approved anti-PD-1/PDL-1 antibodies. For example, Although durvalumab was approved as in single agent as a consolidation therapy, following concurrent platinum-based chemotherapy and radiation therapy, only in stage III NSCLC, we did not include durvalumab in the comparators due to the significant difference in disease stage and treatment structure, compared to other approved anti-PD-1/PDL-1 antibodies in the same disease site. In addition, while both pembrolizumab and nivolumab were both approved in advanced SCLC, as in single agent palliative therapy, the variation in the previous treatment exposure, pembrolizumab is approved as a second line palliative therapy while nivolumab is approved as a third line palliative therapy, could have affected the efficacy and safety comparisons, we did not compare pembrolizumab and nivolumab in advanced SCLC. On the other hand, although avelumab was not approved in the treatment of advanced NSCLC, we included the differential efficacy results of avelumab compared to other anti-PD-1/PDl-1 antibodies in second line palliative treatment of advanced NCSCL, to highlight the distinctive avelumab efficacy and safety outcome.

Data collection was performed between October 2019 and January 2020. One author (LA-S) reviewed the publication of each RCT and extracted the following data. For efficacy, we extracted the hazard ratio (HR) for overall survival (OS) as well as the 95% confidence intervals (CI). Safety and tolerability data comprised the proportion of participants exposed to treatment who were observed to have any grade adverse events (AEs) as well as a subgroup with grade 3 or 4 treatment related AEs, serious adverse events (SAEs), immune-related adverse events (IRAEs), and events leading to discontinuation of the drug without disease progression or death.

For each safety and tolerability outcome, we calculated the odds ratio (OR) and respective standard error (SE) and/or 95% confidence intervals (CI). ORs were calculated by the Mantel Haenszel method using Review Manager Version 5.3 (The Cochrane Collaboration, Copenhagen, Denmark). Data were pooled only in disease sites where more than one anti-PD-1/PD-L1 antibody was approved. Pair-wise comparisons were performed to explore differential efficacy (as measured by the HR for OS) and safety and tolerability (as measured by the OR for each safety and tolerability measure described above). When data were available from more than one pair-wise comparison, they were pooled using generic inverse variance. Due to the substantial clinical heterogeneity, analyses were performed using random effects modeling irrespective of statistical heterogeneity. Network meta-analysis was performed using WINBUGS within Microsoft Excel (Microsoft Corp, Redmond WA). Statistical tests were two-sided, and statistical significance was defined as p < 0.05. No correction was made for multiple statistical testing.

A total of 16 RCTs [6-21] comprising 10673 patients were included in the analysis. Of these, ten were in NSCLC, two in advanced melanoma, two in head and neck squamous cell carcinoma and two in metastatic urothelial cancers. Of the included trials, there were two phase II RCTs, while the rest comprised phase III RCTs. Eight trials (50%) involved 1st line treatment. These trials resulted in a total of 26 different pair-wise comparisons of different ICIs. Characteristics of included studies are shown in Table 1.

1.1,: the third arm, where the pembrolizumab dose was 10mg/kg every 3 weeks was not included, due to the significant difference in dosing, compared to the standard regimen.

1 PDL1 status based on the specific assay used in the respective trials.

In this study, we performed a network meta-analysis to compare the differential efficacy, safety and tolerability of different anti-PD-1/PD-L1 antibodies as evaluated in randomized monotherapy trials in advanced malignancies. No statistically significant difference in efficacy was observed between pembrolizumab, nivolumab and atezolizumab. However, avelumab appeared less efficacious. In contrast, avelumab appeared to be associated with the most favourable safety and tolerability profile compared to other anti-PD-1/PD-L1 antibodies. Nivolumab was as effective as pembrolizumab and atezolizumab but seemed to have less toxicity in general. As multiple anti-PD-1/PD-L1 antibodies are approved in a number of disease sites, these data can help in clinical decision making.

Compared to other analyses aiming to compare different anti-PD-1/PD-L1 antibodies in individual disease sites [1-5], our analysis comprised a much larger number of studies and therefore, may be generalized more widely. We also explored more definitive efficacy outcomes (OS) as well as exploring a breadth of safety and tolerability outcome measures. We excluded RCTs of anti-PD-1/PD-L1 antibodies in combination therapy in order to eliminate the potential effect of the companion therapy on efficacy and toxicity. The result of this however, is that our data apply only to the use of single agent anti-PD-1/PD-L1 inhibitors.

Schema for comparisons included in the network meta-analysis. 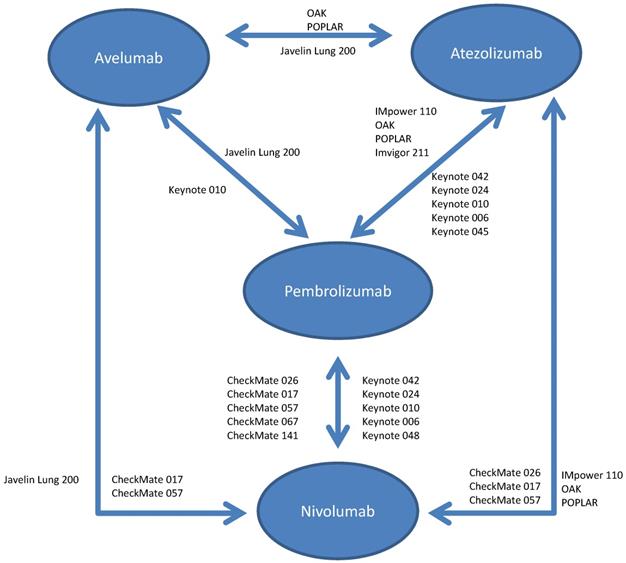 The different anti-PD-1/PD-L1 antibodies have distinct properties. For pembrolizumab and nivolumab, there are significant overlaps between the epitopes of both antibodies and the PD-1 ligand binding site [22]. The interaction of pembrolizumab with PD-1 is primarily dependent on the C′D loop of free PD-1. In addition, pembrolizumab interacts with the C and C′ strands of PD-1, ensuring that it competes with the binding of PD-1 ligands. Nivolumab binds PD-1 mainly through the N-terminal extension, which is located outside the immunoglobulin-like V-type domain of PD-1 and is not involved in ligand recognition [23]. As such, the proposed mechanism of action of pembrolizumab and nivolumab is singular: blockade of the interaction between PD-1 and its ligands through competitive binding of PD-1 [24, 25]. The limited difference in the clinical efficacy between nivolumab and pembrolizumab is likely explained by the minimal differences in the specific interactions of their epitopes.

Atezolizumab and avelumab target the PD-L1 ligand rather than the PD-1 receptor. The Fab fragments of atezolizumab bind close to the N-terminus of PD-L1. In contrast, avelumab binds more perpendicularly to the face of PD-L1. Despite the different binding orientations and different epitopes between antibodies, they all interact with the five hotspot residues (Y56, E58, R113, M115, and Y123) on the central CC'FG β sheet within PD-L1 [26-29] while the distinctive mechanism of action and resultant inhibition in the T-cell signaling is expected to be unrelated to the method of PD-1 blockade, our data show modest differences in efficacy, safety and tolerability between avelumab and the other anti-PD-1/PD-L1 inhibitors. However, differences in study design and patient populations, may have contributed to the observed effects, at least for anti-PD-L1 antibodies if not anti-PD-1 antibodies. Some studies selected patients based on PD-L1 expression. There was also heterogeneity in the biomarker assay utilized and threshold used to identify positive expression. Since efficacy is a direct product of the predictive biomarker, it's possible that the differences observed may be influenced by differences in patient selection.

This study has limitations. First, our data are based on a relatively small number of included RCTs. Additionally, the higher proportion of studies in some disease sites such as NSCLC means that results may be influenced more by this disease site. Second, not all safety and tolerability outcome measures were available for each trial. Third, we extracted study summary-level data as we did not have access to more granular individual patient data. Fourth, there was substantial inter-study heterogeneity in patient population (disease type, line of therapy, eligibility criteria etc.) and this may have had an impact on safety and efficacy. For example, in metastatic head and neck squamous cell carcinoma, the outcomes in the control group were different among included trials (median OS in KEYNOTE-048 10.7 months in total population, and 10.3 months in CPS>1% compared to 5.1 months in total population and 4.6 months in CPS>1% group in Checkmate-141). Additionally, some variation was noted in the different control group regimens in Checkmate-141 (docetaxel: 5.8 months, methotrexate: 4.6 months and cetuximab 4.1 months). However, such differences were not observed with all disease sites with variable control group therapy. For example, in metastatic urothelial carcinoma, despite differences in control group therapy, included trials had similar control group outcomes (median OS in KEYNOTE-045 7.4 months and in IMvigor211 8.6 months).

In summary, pembrolizumab, nivolumab, and atezolizumab have similar efficacy, but avelumab appears less efficacious. Safety and tolerability seem better with avelumab, but worse with atezolizumab and pembrolizumab. These data provide important information for the trade-offs between benefits and risks on anti-PD-1/PD-L1 inhibitors.

18. Burtness B, Harrington KJ, Greil R. et al. Pembrolizumab alone or with chemotherapy versus cetuximab with chemotherapy for recurrent or metastatic squamous cell carcinoma of the head and neck (KEYNOTE-048): a randomised, open-label, phase 3 study. The Lancet. 2019;394(10212):1915-28