Purpose: We assessed the clinical feasibility of C-reactive protein to lymphocyte ratio (CLR) as a determinant of survival in patients with non-small cell lung cancer (NSCLC) undergoing curative surgical resection.

Methods: A retrospective study was conducted on patients with stage I and II NSCLC undergoing curative resection. Demographic and clinical variables, including CLR, were collected and analyzed. The Cox proportional hazards model was used to calculate hazard ratios for overall survival (OS) and cancer-specific survival (CSS). The Mann-Whitney U test was used to compare differences between two independent groups.

Conclusions: Our findings show that CLR could be a determinant of survival in NSCLC patients undergoing curative surgical resection.

In patients with stage I or II Non-small cell lung cancer (NSCLC), surgical resection is widely accepted as the optimal therapeutic option [1]. However, despite substantial advances in surgical techniques, adjuvant treatment (such as chemotherapy, epidermal growth factor receptor tyrosine kinase inhibitor, radiation therapy, or chemoradiation), and the development of new prognostic models, the prognosis remains far from satisfactory [2]. Therefore, the search for crucial prognostic factors that can assist thoracic surgeons in identifying high-risk patients who may benefit from perioperative treatment or clinical trials is required.

Recently, the clinical significance of the combination of peripheral blood lymphocyte count and CRP as prognosticators for gastrointestinal cancers (including gastric, colorectal, and pancreatic cancers) has been studied by some researchers [10-15]. In a study by Kono et al., the CRP to lymphocyte ratio (CLR) was a determinant of the overall survival (OS) and disease-specific survival (DSS) in patients with gastric cancer [13]. In addition, CLR is a feasible determinant of OS in pancreatic cancer [14]. However, the clinical value of CLR has not been evaluated in tumors outside the gastrointestinal tract. Therefore, in this study, we assessed the clinical value of CLR in patients with NSCLC undergoing curative surgical resection.

The medical records of consecutive patients with NSCLC undergoing surgical resection from July 2006 to December 2019 at the Kyung Hee University Hospital at Gangdong were reviewed. The chest-abdomen-pelvis computed tomography (CT) scans and the combination of CT with positron emission tomography was a regular part of standard cancer staging. In addition, CT and magnetic resonance imaging were the main imaging techniques used to diagnose brain metastases.

The inclusion criteria were as follows: (i) primary NSCLC according to the 2015 World Health Organization classification of lung tumors [16]; (ii) stage I or II, according to the 8th edition of the TNM classification (Union for International Cancer Control) [17]; (iii) underwent pneumonectomy, sleeve lobectomy, bilobectomy, lobectomy, or segmentectomy; and (iv) underwent R0 resection. The exclusion criteria were: (i) underwent preoperative chemotherapy, radiotherapy, or another anti-cancer treatment prior to surgery; (ii) presence of small cell lung cancer, sarcomatoid carcinoma, or neuroendocrine tumor; (iii) previous malignancies within the last 5 years, or concurrent second malignancies; (iv) history of liver cirrhosis, stage 4 or 5 chronic kidney disease, (v) stage III or IV disease, (vi) positive test for human immunodeficiency virus, severe infections within 4 weeks prior to surgery, or active autoimmune diseases that required systemic or immunosuppressive agents at the time of surgery.

The variables collected in this study were as follows: age at surgery, sex, smoking history, BMI, Eastern Cooperative Oncology Group scale of Performance Status, percent predicted FEV1, types of surgery, histology, size and extent of the primary tumor, lymph node involvement, TNM stage, pleural invasion, lymphatic invasion, vascular invasion, and residual disease. A BMI of less than 18.5 kg/m2 was considered underweight. Classification of pleural invasion was as follows: PL0, tumor within the subpleural lung parenchyma or superficial invasion into the pleural connective tissue; PL1, tumor invasion beyond the elastic layer; PL2, tumor invasion to the pleural surface; and PL3, tumor invasion into any component of the parietal pleura [18]. The classification of residual disease was as follows: R0, resection for cure or complete remission; R1, microscopic residual tumor; and R2, macroscopic residual tumor [19].

The laboratory variables collected were as follows: white blood cell count, differential count, hemoglobin concentration, serum creatinine level, serum albumin level, and CRP level. The CLR was calculated as follows: [CRP level (mg/dL) × 100]/peripheral blood lymphocyte count (number/μL), as reported previously [13, 14]. Blood test results were analyzed through tests performed within 7 days before surgery. If more than one test result was available, the test result closest to the date of the surgery was selected for further analysis. The diagnosis of anemia was based on a hemoglobin concentration below 13 g/dL in men and 12 g/dL in women.

The Cox proportional hazards model was used to calculate hazard ratios, which were performed only on variables that met the proportional hazards assumption on the basis of graphic plots of Schoenfeld residuals. Only variables with p <0.05 in the univariate analysis were included in the multivariate Cox model. Harrell's concordance probability (C-index) for the Cox model was performed to measure the discriminative power of a risk prediction model. The variance inflation factor (VIF) was calculated for the diagnosis of multicollinearity.

The decision curve analysis (DCA) displays estimates of the (standardized) net benefit over a range of probability thresholds used to categorize observations as 'high risk'. Bootstrap analysis with 500 resamples was used for the analysis.

In addition, a bootstrap cross-validation estimate of the C-index at different time points was applied to assess and compare the discriminative power of two regression models (i.e., baseline vs. full model). The number of bootstrap samples was 1000, and sampling with replacement from the original data set was accomplished.

The Mann-Whitney U test was used to compare differences between two independent groups when the dependent variable was continuous. All p-values presented were 2-sided, and statistical significance was declared at p<0.05. Data were analyzed using the R package.

Demographic and clinical characteristics of the patients

The purpose of the present study was to assess the clinical feasibility of CLR in a cohort of NSCLC patients undergoing curative surgical resection. In this study, we found that preoperative CLR was a significant determinant of OS and CSS.

Decision curve analysis to calculate the clinical net benefit of each model for overall survival (A) and cancer-specific survival (B). The baseline model includes three covariates (i.e., age, lymphatic invasion, and stage), and the full model includes four covariates (i.e., age, lymphatic invasion, stage, and CLR). All, a line that all patients are surviving; None, a line that no patient is surviving.

The bootstrap cross-validation estimates of the C-index at different time points to assess and compare the discriminative power of two regression models for overall survival (A) and cancer-specific survival (B). The baseline model includes three covariates (i.e., age, lymphatic invasion, and stage), and the full model includes four covariates (i.e., age, lymphatic invasion, stage, and CLR).

As CLR is a relatively new concept, there are only a few available studies, irrespective of cancer type. In a study by Kono et al., using a multivariate Cox model, CLR was found to be a significant determinant of OS and DSS in patients with gastric cancer undergoing curative surgery [13]. In addition, in a study by Fan et al., pre-treatment CLR was found to be a feasible biomarker for the prediction of OS in patients with pancreatic cancer [14]. 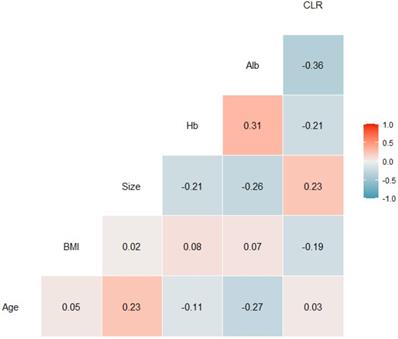 However, the mechanisms underlying the clinical significance of CLR remain unclear. CRP, an acute-phase reactant, is one of the most frequently used markers that reflects the body's systemic inflammatory response [20, 21]. In patients with malignant tumors, CRP levels are reportedly modulated by cytokines, particularly interleukin 6, which is produced by the tumor cells themselves or by the surrounding cells [22]. The role of CRP in tumorigenesis has also been elucidated in malignant tumors [23]. Furthermore, in NSCLC, preoperative CRP has been suggested as a significant determinant of oncological outcome [3, 5, 24, 25]. The peripheral blood absolute lymphocyte count (ALC) has been suggested as an important nutritional index in patients with various diseases [9, 26]. In addition, its role as a marker for host cell-mediated cytotoxic immunity against infection and tumors has also been suggested [27]. In NSCLC, preoperative ALC has been considered a good indicator of oncological outcome [9, 28, 29]. As CRP reflects the level of the systemic inflammatory response [21] and ALC reflects the level of the nutritional and immunologic status [30], CLR could reflect the balance between inflammation, immunity, and nutrition in the body [10-15]. In this study, relative increases in CLR levels were demonstrated in the elderly, male gender, former/current smoker, underweight, squamous cell carcinoma, increased tumor size, stage II, hypoalbuminemia, and anemia (Table 3). These findings may, at least in part, give an answer to why the CLR is an independent prognostic factor for OS and CSS in our study.

C-reactive protein to lymphocyte ratios according to the covariates

The strengths of this study were as follows. First, the present study was the first to demonstrate the role of preoperative CLR as a determinant of survival in patients with NSCLC undergoing surgical resection. Using a multivariate Cox model, we found that CLR was a significant determinant of long-term outcomes (i.e., OS and CSS) along with age, lymphatic invasion, and stage. In this study, CLR was treated as a continuous variable, instead of being dichotomized according to the cutoffs. Optimizing cutoffs by minimizing the p-value can lead to bias, such as an overestimation of the prognostic impact, since cutoffs cannot be applied in different cohorts. In addition, dichotomization based on cutoffs falsely suggests that there are two qualitatively different subgroups when the prognostic impact is in fact linear [33]. As such, our findings may help thoracic surgeons better differentiate patients with poor long-term survival using CLR with traditional stratification tools prior to therapeutic resection for NSCLC. Second, CLR is a combination of test items that are routinely tested before surgery, and it has the advantage of being able to obtain the test results quickly without the need for expensive test equipment.

This study had some limitations, therefore, the research results must be interpreted carefully. First, this study was conducted retrospectively. Therefore, missing data was inevitable and may have affected the results. Second, while both potential biases and random errors were controlled from the study plan to the implementation, our study had a limitation of single-center data analysis without validation through independent cohorts. However, based on the results of this study, it is possible to conduct a prospective study with an independent external verification group as the next step of this study.

In conclusion, our study demonstrated that preoperative CLR is an important determinant of OS and CSS in stage I and II NSCLC patients undergoing curative resection. However, external validation of our results is a prerequisite before they are subjected to clinical applications.

This research received no specific grant from any funding agency in the public, commercial, or not-for-profit sectors.

This study protocol was approved by the Institutional Review Board of Kyung Hee University Hospital at Gangdong (IRB2021-04-009). Written consent was waived because this study was a retrospective study and waiver does not negatively affect the rights and well-being of the subject. This study was conducted in accordance with the ethical principles of the Declaration of Helsinki for medical research.