Cervical cancer (CC) is the second most prevalent malignancy affecting women globally [1, 2]. Technological advancements have greatly improved diagnosis and treatment of CC, but the clinical outcomes remain poor as a result of metastasis/recurrence of the disease [3, 4]. Therefore, it necessary to elucidate the pathogenesis and molecular mechanisms of CC and develop strategies to improve treatment outcomes.

Here, we examined the role of LINC01503 in CC. Our findings confirm that this lncRNA facilitates the invasion as well as the proliferation of CC cells by interacting with the miR-615-3p/CCND1 axis.

Human CC tissues and matched normal tissues were collected from 43 patients treated at Cangzhou Central Hospital and were confirmed by 2 pathologists according to the guidelines of FIGO (International Federation of Gynecology and Obstetrics). None of the study subjects received any treatment (chemotherapy or radiotherapy) prior to surgery. All participants provided written informed consent. After collection, the specimens were briefly frozen in liquid nitrogen, and then preserved at -80°C. The ethics committee of Cangzhou Central Hospital approved the study. The clinical features of all the subjects are indicated in Table 1.

The CC cell lines consisting of SiHa, HeLa, C33A, and CaSki, as well as the Ect1/E6E7 normal human cervical cell line were procured from ATCC. Subsequently, the cells were grown in RPMI 1640 medium (Gibco) enriched with 10% fetal bovine serum (FBS) under a humidified environment with 5% CO2 and 37°C.

The CCK-8 kit (Dojindo, Kumamoto, Japan) was employed to explore cell proliferation. In brief, transfected CC cells suspected in 500µL of media were cultured in 96-well plates for 24, 48, or 72 hours. 10μL of CCK8 solution was introduced into each well and cultured for further 2 hours. Subsequently, a microplate reader was employed to determine the absorbance at 450nm.

Colony formation assays were done by seeding 5000 transfected CC cells into 6-well plates. Subsequently, the cells were cultured for 14 days, followed by fixation with methanol for 30 minutes. Afterwards, a staining step was conducted using by 0.1% crystal violet before counting colony numbers.

Inoculation of the transfected cells suspended in serum-free medium into the upper chamber of the transwell membrane (BD Biosciences) was performed. The medium containing 10% FBS was put in the bottom chamber. 24 hours later, the cells were stained in the dark with crystal violet stain (Sigma, MO, USA), after which the cells were counted.

TRIzol reagent (Thermo Fisher Scientific) was employed to isolate RNA from the cells as per the protocols described by the manufacturer. The RNA was converted into cDNA with a cDNA Synthesis kit (Revert Aid First Strand, Fermentas, Canada). PCR was done using SYBR Premix Ex Taq II kit (Takara, Tokyo, Japan) on a CFX96 Real-Time PCR machine (Biorad) using the following program: 95°C for 6 minutes (denaturation); and 40 cycles of 94°C for 30 seconds (initiation), 60°C for 30 seconds (annealing), and 73°C for 1.5 minutes (elongation). Relative gene expression was determined via the 2-ΔΔCt approach. U6 along with GAPDH were served as the internal control.

RIPA buffer (Sigma) enriched with 1mM PMSF was used to lyse the cells. A BCA assay kit (Thermo Fisher Scientific) was utilized to measure the protein concentration. Next, the proteins were resolved with SDS-PAGE, and then blotted onto PVDF membranes. After that, 5% skimmed milk was utilized to prevent non-specific binding on the membranes for 1 hour, and overnight incubation was conducted at 4°C with anti-CCND1 primary antibody. The membranes were rinsed and incubated with HRP-labelled goat anti-rabbit secondary antibody (Abcam) and incubated at room temperature. The signal was then developed using enhanced chemiluminescence reagent (Advansta, MO, USA). Finally, the ImageJ was employed to quantify the proteins and the GAPDH gene utilized as the normalization control.

Wildtype (WT) and mutant (MUT) LINC01503 or CCND1 3'UTR were amplified, then cloned into the pmirGlO luciferase reporter vector (Promega, Madison, WI, USA) to create WT-LINC01503, WT-CCND1, MUT-LINC01503, and MUT-CCND1 vectors. Cells were co-introduced into these reporters and miR-615-3p (or miR-NC) via co-transfection and cultured for 48 hours. Dual-luciferase assays (Promega) were then carried out to determine the luciferase activity and normalized to Renilla luciferase activity.

The Magna RNA binding protein immunoprecipitation kit (Millipore, Billerica, MA, USA) was utilized for the RIP assay. In summary, whole-cell lysates were prepared using RIP buffer, and then incubation with magnetic beads hybridized with human anti-Ago2 antibody or normal mouse IgG as a negative control performed. The sample was then incubated with proteinase K, followed by RNA immunoprecipitation. The immunoprecipitated RNA was purified and analyzed by RT-qPCR to quantify LINC01503 and miR-615-3p expression.

The Animal Care and Use Committee of Cangzhou Central Hospital approved all the mice experiments. We subcutaneously administered 2×106 stably transfected cells into BALB/C 4-week-old female nude mice weighing 18-25g (n=4 for each group). Tumor volume was monitored using a caliper weekly from the 7th day after injection. Tumor volume was computed via the formula: length × width2 × 0.5. The animals were euthanized six weeks after xenografting using cervical dislocation, the tumors weights were measured for downstream analyses.

The present study determined LINC01503 expression into the GEPIA dataset to explore its differential expression and influence on the prognosis of individuals with CESE, OV, UCEC, and UCS. TargetScan, miRcode, LncBase v.2 and Starbase V2.0 were used to investigate the potential target of LINC01503. TargetScan, miRWalk as well as miRTarBase were employed in predicting the prospective target gene of miR-615-3p.

3.1. LINC01503 expression is significantly upregulated in CC cells and tissues

We further assessed miR-615-3p expression in CC by RT-qPCR and observed that the levels of miR-615-3p were remarkably lower in CC tissues and cell lines (Figure 5A-B). Correlation analysis indicated a crosstalk between LINC01503 and miR-615-3p in CC tissues (Figure 5C). Evaluation of the cellular functions of miR-615-3p using Edu and transwell invasion assays showed that the proliferative as well as the invasion ability of HeLa cells were inhibited when miR-615-3p was upregulated (Figure 5D-E). Together, these data indicate that LINC01503 might regulate the progression of CC by interacting with miR-615-3p. 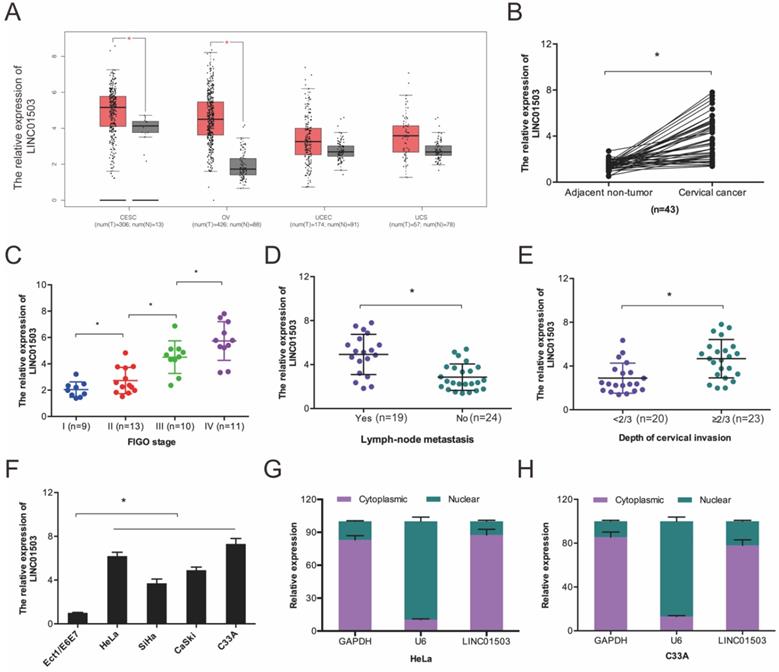 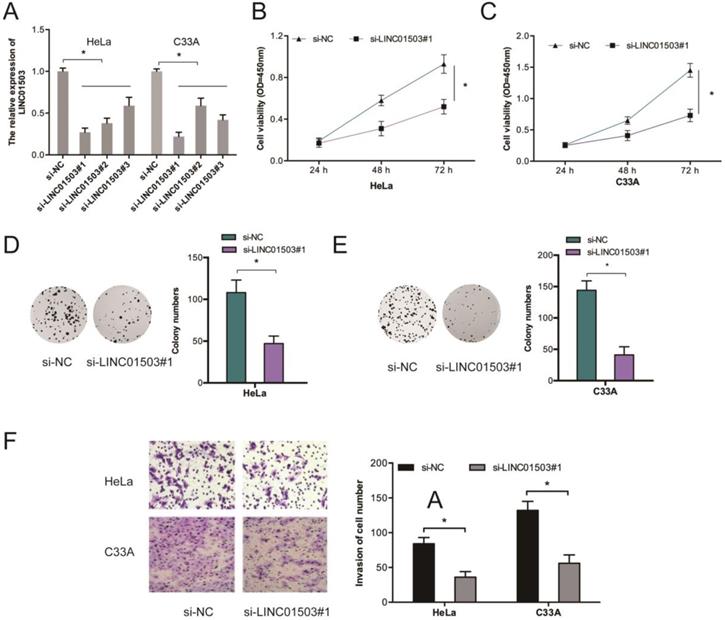 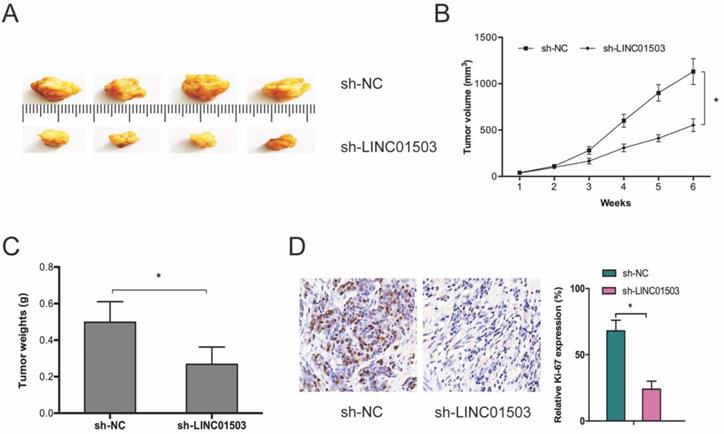 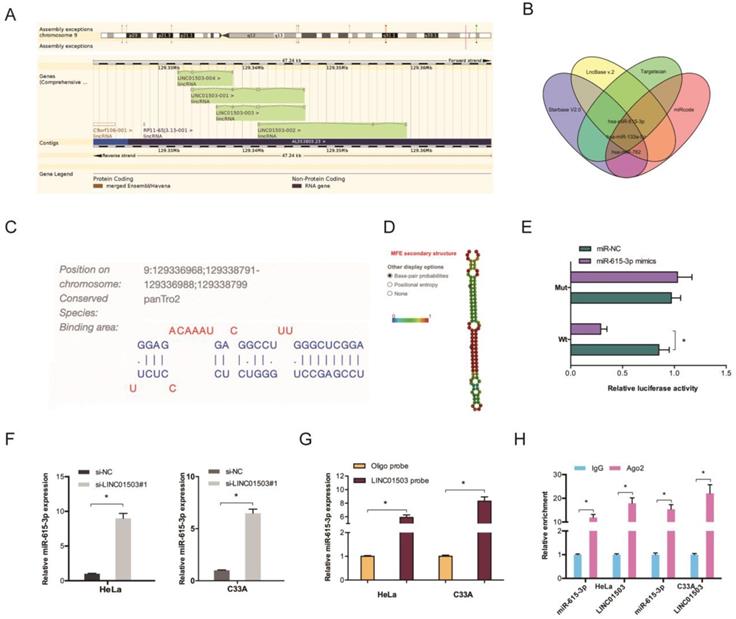 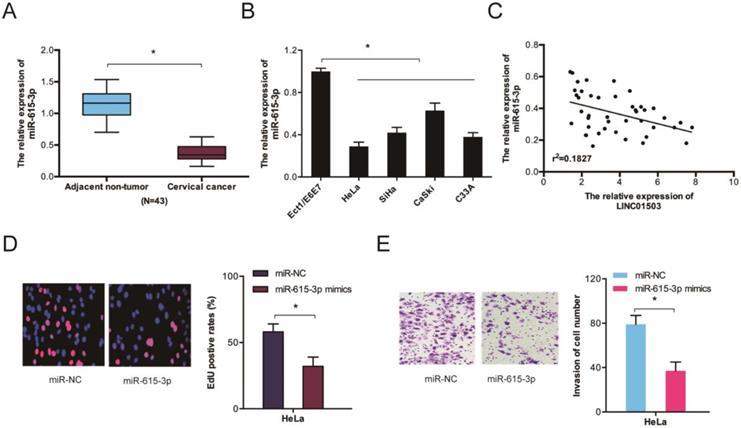 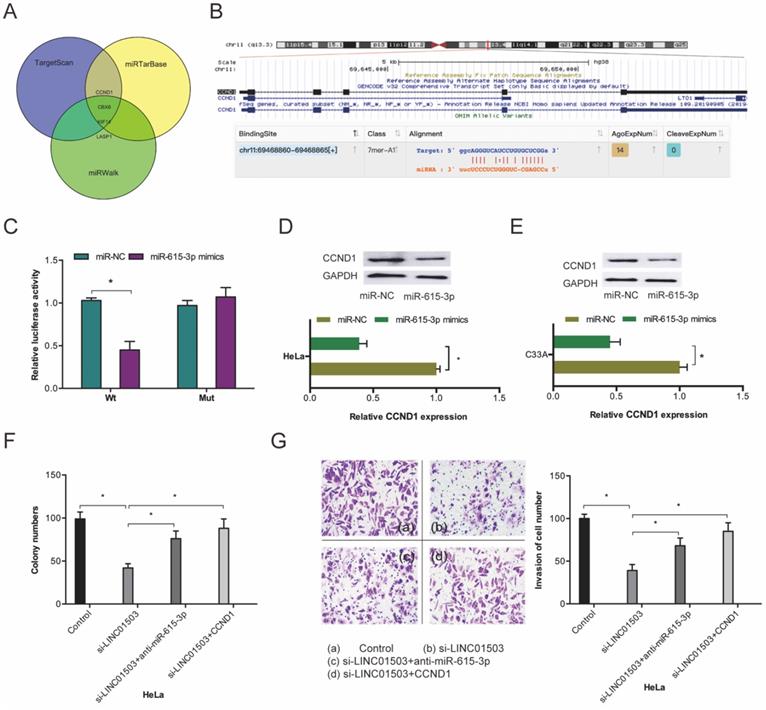 Furthermore, we performed rescue assays to verify the involvement of LINC01503/miR-615-3p/CCND1 axis in CC progression. Colony formation and transwell invasion assays revealed that miR-615-3p inhibitors or CCND1 upregulation significantly obliterated the suppression of Hela cell proliferation as well as invasion by si-LINC01503 (Figure 6F-G). This indicating that LINC01503 promotes the progression of CC cells by interacting with the miR-615-3p/CCND1 axis.

Here, we established that LINC01503 was upregulated in CC cells as well as tissues and that this associated with advanced clinical characteristics. Additionally, we observed that LINC01503 knockdown inhibited CC progression by suppressing the metastatic and proliferative abilities of tumor cells, but the precise mechanism is yet to be revealed.

LncRNAs have been found to influence tumorigenesis by sponging miRNAs [19]. Several studies have found that lncRNA functions as ceRNAs to sponge miRNAs in CC. Zhu et al. revealed that TUG1 sponges miR-138-5p to promote CC progression [20]. Yang et al. indicated that lncRNA OIP5-AS1 enhances the invasion and proliferative abilities of CC cells by upregulating ITGA6 and sponging miR-143-3p [21]. Here, we report that LINC01503 might function as a ceRNA for miR-615-3p in CC. LINC01503 suppression upregulated miR-615-3p in CC cells. Furthermore, using luciferase reporter, RNA pull-down, as well as RIP assays, we verified the cross talk between LINC01503 and miR-615-3p. Moreover, miR-615-3p was demonstrated to be poorly expressed in CC tissues and it suppressed tumor growth along with invasion in vitro. Collectively, our data demonstrates that miR-615-3p mediates the oncogenic function of LINC01503 in CC.

CCND1, along with cyclin-dependent kinases, modulates G1/S transition through Rb phosphorylation [22, 23]. Accumulating evidence shows that CCND1 influences a plethora of biological processes associated with the pathogenesis, as well as drug resistance in human cancers [24, 25]. CCND1 is therefore recognized as an oncogene in multiple cancer types consisting of lung cancer, osteosarcoma, and nasopharyngeal carcinoma et al [24-26]. Nevertheless, the function of CCND1 in CC is unknown. Here, we found that CCND1 is a target of miR-615-3p in CC and is negatively modulated by miR-615-3p. We showed that higher levels of CCND1 abolish the suppressive effects of LINC01503 KD on CC cell proliferation and invasion. Collectively, the results indicate that LINC01503 knockdown suppresses CC progression by interacting with the miR-615-3p/CCND1 axis.

In conclusion, our data show that LINC01503 is upregulated in CC and its knockdown suppresses the invasion and proliferative ability of CC cells. Therefore, it modulates miR-615-3p expression, thereby suppresses CCND1 expression. Our study highlights the therapeutic potential of targeting the LINC01503/miR-615-3p/CCND1 axis in the treatment of CC.

The datasets supporting the conclusions of this article are included within the article.

This research was approved by Cangzhou Central Hospital and conducted in accordance with the principles of the Declaration of Helsinki.

JF, FYG, JX conceived and designed this study. JF, YYL, XYX conducted the experiments and analyzed and checked the data. JF, JX supervised the whole project and revised the manuscript. All authors read and approved the final manuscript.

This article has not been published elsewhere in whole or in part. All authors have read and approved the content and agree to submit for consideration for publication in the journal. The authors declared no conflict of interest.

26. Nurhidayat A A, Afiati H A U, Hernowo B S. The role of cyclin D1 and vascular endothelial growth factor (VEGF) in radiotherapy response of undifferentiated nasopharyngeal carcinoma[J]. J Med Sci. 2018;50(4):385-391