Background: Despite recent improvements in the diagnosis and therapy of intrahepatic cholangiocarcinoma (ICC), the prognosis for ICC patients remains poor. Therefore, it is needed to identify new biological indicators for ICC progression.

Methods: Immunohistochemistry was engaged to inspect the ecto-5ʹ-nucleotidase (CD73) and CD8 expressions in tissue microarrays including tissues from 140 ICC patients. Then, the association between the level of CD73/CD8 and clinicopathologic characteristics of ICC was analysed. Finally, the prognostic value of CD73 and CD8 levels in ICC patients was assessed by Kaplan-Meier and multivariate and univariate analyses.

Conclusions: We revealed that CD73 expression and low tumour-infiltrating CD8+T cells are valuable predictors of survival and recurrence in patients with ICC.

Intrahepatic cholangiocarcinoma (ICC) represents the 2nd most common primary liver malignancy and is increasing in incidence [1]. Despite advances have been made in the early diagnosis of ICC, the majority of patients are still diagnosed at a terminal stage, and only roughly 20% of patients have the chance for curative surgical resection. Furthermore, almost 80% patients may subsequently appear postoperative disease recurrence [2]. Hence, an advance in comprehending the mechanisms of tumour recurrence will be profitable for ICC patients.

CD73 (cluster of differentiation 73 or ecto-5′-nucleotidase, NT5E) is a sort of lymphocytic differentiation antigen in diverse tissues and cell types [3]. Functionally, CD73 participates in many vital physiological and pathophysiological signalling via adenosine receptors to catalyse extracellular 5′-adenosine monophosphate to adenosine, which serves as an essential regulator in the purinergic signalling pathway. Now, CD73 was illustrated to be critical not only in supervising the production of extracellular adenosine to regulate adenosine pathway but also in adjusting other biological processes, including the inflammation and immune response. For instance, CD73 has important effects on cancer cell proliferation and survival via reshaping the tumour immune microenvironment [4]. Recently, CD73 was discovered to be widely expressed on numerous tumour cell lines and overexpressed in several cancerous samples such as colon cancer, mammary carcinoma, and prostate cancer [3,5,6]. Moreover, CD73 was revealed to be a potential prognostic marker for patients with breast cancer and was found to promote breast cancer progression via regulate epidermal growth factor receptor (EGFR) level [7]. In the liver, immunohistochemical and enzyme histochemical studies have shown that CD73 was distributed in the biliary canaliculi of hepatocytes and stellate cells and played an important role in the pathogenesis of hepatic fibrosis, which ultimately leaded to cancer [8]. However, the role of CD73 in ICC remains unexplored.

Accumulating evidence indicated that the CD73 could be regarded as a novel immune checkpoint that induced cancer development through restraining the anti-tumour immune response. Here, we aimed to analyse CD73 expression in ICC tissues, and to explore the relationship between the CD73 expression and/or level of CD8+ T cells and the clinicopathological characteristics. Moreover, their prognostic significance in ICC patients was also investigated.

Tumour and paired peritumoral samples were acquired from 140 ICC patients who underwent the surgical resection at Zhongshan Hospital, Fudan University from February 1999 to November 2006. The surgical resection was defined as our previous report [1]. The histopathological diagnosis was independently determined by two pathologists. The ethical approval was obtained from the Research Ethics Committee and institutional review board of Zhongshan Hospital, and informed written consent was obtained from every patient. All following-up data were itemized in February 2009. The median following-up was 25 months (range 4 to 120 months). The following-up measures were delineated in our earlier study [1]. The clinicopathological features of all patients were recorded in Table 1.

The tissue microarray (TMA) was built as depicted previously [1]. Briefly, all tissues were histologically explored by two pathologists via haematoxylin and eosin staining (HE) and pre-tagged the representing regions in paraffin blocks. About 1 mm diameter cylinders from 2 representative regions was obtained from every sample. Then, two TMA blocks (one is ICC, and another is a paired peritumoral) were built (Shanghai Biochip Co., Ltd., Shanghai), and each included 140 cylinders.

Correlations between CD73 or CD8 and clinicopathological features in 140 ICC

Statistical analysis was done with SPSS 19.0 (SPSS). The χ2 test and Fisher's exact test were utilized the difference between groups. Overall survival (OS) and the disease-free survival (DFS) were defined as previously reported [1]. Prognostic significance was appraised using Kaplan-Meier and log-rank tests analyses. Cox's proportional hazards regression model was used to analyse the independent prognostic factors. The less than 0.05 of p value was deemed to be significant difference.

Expression of CD73 was positively related to malignant phenotypes of ICC

The CD73 protein was resided in the cell cytoplasm, and upregulation in ICC tissues compared to paired peritumoral tissues (Fig. 1). The expression of CD73 displayed great heterogeneity among ICC tissues (Fig. 2). In ICC, CD73high was observed in 48.5 % (68/140) of all tumour samples. As shown in Table 1, CD73high was positively correlated with lymphatic metastasis (p=0.049), whereas other clinical features, containing age, sex, HBsAg background, liver cirrhosis, preoperative serum carbohydrate antigen 19-9 (CA19-9) and Child-Pugh score, were not significantly related to the expression of CD73.

Expression of CD73 and CD8 protein in ICC tissues. Representative images of tumor tissues with different CD73 and CD8 staining, which showed that the CD73 expression is negatively associated with the CD8 staining. 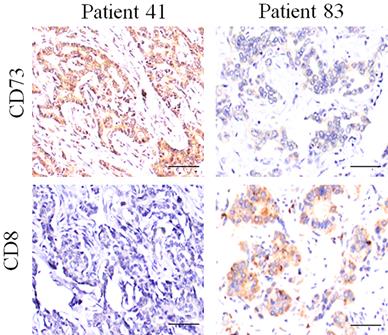 Several reports have demonstrated that the elevated expression of CD73 depressed antitumor immunity by impairing the infiltration and function of CD8+T cell; however, we did not find the obviously negative relationship between CD8 and CD73 staining in ICC tissues (Fig. 3 and Fig. S1).

At the last following-up, 108 cases appeared tumour relapse, and 109 cases died, including seven cases without tumour relapse. The 2- and 5-year OS and DFS rates in the whole population were 77.9% and 70.0%, 35.7% and 23.6%, respectively. The univariate analysis revealed that massive tumour (>5 cm), poor differentiation, multiple tumours, microvascular/bile duct invasion, and lymphatic metastasis were predictors of OS and DFS. Other features, containing age, sex, and history of hepatitis, had no prognostic significance for OS and DFS (Table 2). The expression of CD73 was disclosed to be related to the OS and DFS rates (Table 2). The 5-year OS in the CD73low group was evidently higher than that in the CD73high group (p= 0.001, Fig. 4). The 5-year DFS rate in the CD73low group were distinctly lower than that in the CD73high group (p= 0.025, Fig. 4). The expression of CD8 was also obviously correlated with the OS and DFS rates (Table 2). The postoperative 5-year OS rate of ICC patients was higher in the CD8high group than that in the CD8low group (p =0.001), and the DFS rate of ICC patients in the CD8low group were clearly higher than those in the CD8high group (p = 1.11E-4) (Fig. 4).

ICC is a destroying disease with limited therapy choices and poor prognosis. Although surgical resection is limited to patients with early-stage disease, this method still is the merely curative therapeutic mean for ICC patients. Presently, chemotherapy is the only confirmed standardized experience for the majority of ICC patients in advanced stages. Accordingly, there is a practical requirement to advance fresh therapies for this disease. CD73, initially characterized as a lymphocyte differentiation antigen, has been revealed to be a co-signalling molecule on T cells and an adhesion molecule that is required for lymphocytes to adhere to the endothelium [10,11]. Recently, it was revealed that elevated CD73 expression on cancer cells damages the anti-tumour T cell response [10]. We showed here that CD73 expression was upregulation in almost half of our ICC tissues, and the expression of CD73 was positively correlated with the lymphatic metastasis of ICC. The CD8 staining was low in ICC tissues compared to paired peritumoral tissues, and patients with low tumour-infiltrating CD8 T cells often accompanied with Serum AFP, large tumor size and Lymphatic metastasis. Moreover, we showed that the CD73 expression and level of tumour-infiltrating CD8+T cells were independent indexes for predicting the prognosis of ICC patients. Thus, a high level of CD73 or low tumour-infiltrating CD8+T cells serves as an index of ICC progression.

Previous studies have reported that CD73 is upregulated in and promotes the progression of various human cancers, containing colon, lung, pancreas, breast and ovary cancer [3,12-14]. For instance, a high level of CD73 was found to promote tumour angiogenesis, invasion, and metastasis and was associated with a short OS time in breast cancer15. The overexpression of CD73 was found in highly invasive human melanoma cells [16], but not in melanocytes and primary tumour cells; moreover, CD73 has been demonstrated to serve as a proliferative factor for glioma cells. Additionally, elevated CD73 expression was suggested to be a prognostic marker for patients with colon cancer [3]. Here, we also found that CD73 expression was elevated in ICC tissues compared to paired peritumoral tissues. Furthermore, we discovered that the expression of CD73 was positively associated with the malignant phenotype of ICC, and a high level of CD73 was correlated with the low OS and high DFS rates in ICC patients. Moreover, the cox analysis uncovered that CD73 expression is an independent prognostic marker for the OS of ICC patients. Thus, we presumed the high level of CD73 fostered ICC development and might serve as a prognostic biomarker for the OS of ICC patients.

Recent studies have shown that cancer exosomes express CD39 and CD73, which suppress T cells through adenosine production. Furthermore, CD73 is an ectonucleotidase that cooperates in the extracellular adenosine production through ATP hydrolysis to attack the balance of immunosuppressive microenvironments, indicating that CD73 could depress the CD8+T cell responses [17-20]. Here, we found that a weak negative relationship between the CD73 level and tumour infiltrating CD8+T cells, which might indicate that the tumour infiltrating CD8+T cells might be impacted by other factors. The cox analysis showed the combined CD73 expression and tumour infiltrating CD8+T cells could be deemed as a powerful prognostic indicator for the OS and DFS of patients with ICC. Now, emerging evidence demonstrated the immunosuppressive function of CD73 in tumour, and the inhibitory action of the anti-CD73 antibody on breast cancer growth and metastasis, the high level of CD73 might not only serve as an important prognostic index but could also be a potential therapeutic target in ICC.

In conclusion, we have provided that a high level of CD73 foster ICC development, and CD73 level and/or tumour infiltrating CD8+T cells can be the important biomarkers for the prognosis of ICC patients.

This study was supported by the project of special funds for basic research expenses of Central Universities (22120180383).

Ethical approval was confirmed by the Zhongshan Hospital Research Ethics Committee and written informed consent was acquired from each patient.