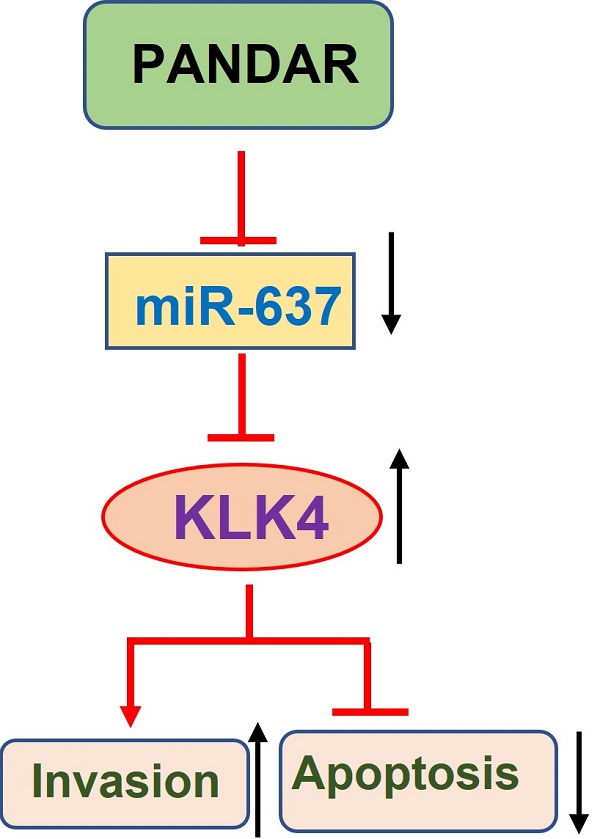 Thyroid gland carcinoma (TC) originates from follicular or parafollicular thyroid cells and is one of the most common endocrine organ malignancies. Its morbidity and mortality have steadily increased over the years [1]. Previous studies have shown that radiation therapy, chemotherapy and surgery are common treatments for thyroid gland carcinoma, but none are very effective [2, 3]. Some studies have shown that in addition to environmental and genetic susceptibility factors, epigenetic changes may play a key role in the occurrence and development of various tumours, including thyroid carcinoma [4, 5].

As important participants in tumour biology, long non-coding RNAs (lncRNAs) are involved in many regulatory functions, including regulation of apoptosis and invasion and induction of reprogramming of pluripotent stem cells [6, 7]. Abnormal expression of a number of lncRNAs is often associated with cancer pathogenesis [8, 9]. LncRNA research provides new ideas for the study of cancer genetics and molecular mechanisms.

PANDAR, a novel non-coding RNA located in the promoter region of CDKN 1A antisense DNA damage-activated RNA, is located at chromosome 6p21.2. PANDAR is an oncogenic in bladder cancer, promoting cell proliferation, migration, and apoptosis [10]. In addition, Han et al. showed that low expression of the long-chain non-coding RNA PANDAR predicts poor prognosis in non-small cell lung cancer and affects apoptosis by modulating Bcl-2[11]. It has recently been reported that PANDAR is highly expressed in thyroid gland carcinoma and can promote tumour proliferation and inhibit apoptosis. However, how PANDAR regulates proliferation and apoptosis still needs to be studied.

miRNAs can participate in tumour progression by regulating the post-transcriptional levels of their target genes and may be involved in the regulation of the expression of many important tumour-associated genes and the activity of multiple signalling pathways [12]. MiR-637 has been reported to be abnormally expressed in tumours, such as breast cancer, glioma, and prostate cancer, and is closely related to tumour proliferation and metastasis [13-16]. At present, there is no research to explore its effect on thyroid gland carcinoma. Kallikrein-related peptidases (KLKs) are a class of secreted serine proteases with trypsin or chymotrypsin activity and are composed of 15 members (KLK1-15) [17]. Recent studies have found that the KLK family plays an important role in tumour progression and is thought to be a key factor in regulating tumour cell proliferation, migration and invasion [18, 19]. KLK4 is a member of this family, and previous studies have shown that together with KLK5, it can activate precursor hepatocyte growth factor activator indirectly, whereby precursor hepatocyte growth factor dispersing factors are transformed into mature and activated forms that promote the progression of a variety of tumours [19, 20]. According to Obiezu [19, 21], overexpression of KLK4 induces proliferation and increases the risk of recurrence and death in patients with ovarian cancer. The results of these reports indicate that KLK4 may be a valuable biomarker in the diagnosis and treatment of ovarian cancer. However, other studies on thyroid gland carcinoma have rarely been reported.

The Nthy-ori3-1 cells purchased from the American Type Culture Collection and human thyroid gland carcinoma K-1, TPC-1, K1, FTC133 and XTC-1 cells were cultured in RPMI-1640 medium with 10% foetal bovine serum (FBS), in a humidified incubator containing 5% CO2 at 37 °C. The cells were grown in a single layer and routinely passaged when the cells were 90% confluent.

After 24 hours of transfection, cells were reseeded in 96-well plate at density 104/well. MTT assay was performed using MTT assay kit (promega) according to the manufacturer's protocol.

The cells were transfected with lentivirus for treatment, and puromycin was used to select stable cell lines. The cells were seeded in the upper chamber with a medium containing 0.1% bovine serum albumin, and medium containing 30% FBS was placed in the lower chamber. Transwell assays were performed as described by Wei et al. [22]. Three independent experiments were performed.

All experimental procedures involving animals were in accordance with the Guide for the Care and Use of Laboratory Animals, and were performed according to the institutional ethical guidelines for animal experiments. All studies involving animals were approved by the Affiliated Hospital of Chengdu University. Female BALB/C nude mice (5/groups, 5 weeks old) were raised in the animal facility during the experiment procedures with free access to diet or water. Briefly, 5×106 TPC-1 cells in 100 µl serum-free medium were injected subcutaneously (s.c.) into per mouse (right back). Seven animals were randomly divided into each study group. After 6 weeks after implantation, mice were sacrificed, and the xenograft tumour were analysed by standard histological examination.

Three independent experiments were performed. All data in this study were expressed as mean ± sd, and differences between groups were determined using analysis of variance (Anova) of SPSS version 18.0. p<0.05 was considered statistically significant.

As shown in Figure 1E, the expression of PANDAR in TPC-1 and K1 cells was relatively higher than that in the other three cell lines. Therefore, we selected the TPC-1 and K1 cell lines as models to study the effects of PANDAR on cell proliferation and apoptosis. We knocked down PANDAR expression in TPC-1 and K1 cancer cells by transfection with NC-siRNAs or si-PANDAR. As shown in Figure 2A, qRT-PCR demonstrated that cells transfected with si-PANDAR showed a significant decrease in PANDAR mRNA expression levels compared to the NC groups in both cell lines (P < 0.05; Figure 2A). To determine the effect of PANDAR on the viability and proliferation of thyroid gland carcinoma cells in vitro, MTT assays were performed, which showed that PANDAR knockdown significantly inhibited the viability of TPC-1 and K1 cells in a time-dependent manner (P < 0.05; Figure 2B-C). The ability of TPC-1 and K1 cells to undergo apoptosis was also significantly enhanced after knocking down PANDAR compared to that in the negative control (P < 0.01; Figure 2D). These results indicate that PANDAR expression has a significant promoting effect on the growth of thyroid gland carcinoma cells. Furthermore, knockdown of PANDAR resulted in attenuated invasion of TC cells as measured by the transwell invasion assay (Figure 2E).

LncRNA-PANDAR overexpression in thyroid gland carcinoma tissue and cell lines. (A) 10 pairs of thyroid gland carcinoma and adjacent tissue sequencing results for bioinformatics analysis PCA analysis showed the difference between cancer and adjacent groups. (B) Heat map showing cancer adjacent groups all non-coding RNA expression; the RNA detection data is analysed by the R language toolkit. (C) Volcano plots analysis of non-coding RNA differences. The expression of LncRNA-PANDAR and miR-637 significant difference (D) qRT-PCR was used to detect the expression of PANDAR in thyroid gland carcinoma tissues and adjacent tissues (30 patients in total). It was shown that PANDAR was highly expressed in cancer tissues compared with adjacent tissues, and the difference was statistically significant. (E) qRT-PCR was used to detect the expression of PANDAR in seven cell lines (Nthy-ori3-1, K1, TPC-1, K1, FTC133, XTC-1, B-CPAP), and the expression of PANDAR was significantly higher than the normal cell line Nthy-ori 3-1. 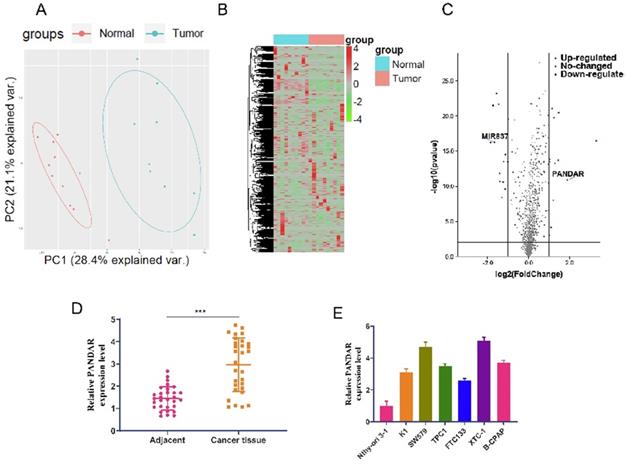 To investigate how PANDAR regulates proliferation and metastasis in thyroid gland carcinoma, we transfected the PANDAR plasmid into TPC-1 cells for 72 hours and performed transcriptome sequencing analysis of the differentially expressed downstream non-coding RNAs of PANDAR. From the sequencing analysis, the heat map showed that the expression of miR-637 was significantly downregulated in the PANDAR overexpression group (Figure 3A). Then, we searched for a target gene candidate of PANDAR (mirdb.org) and identified miR-637 as a candidate target of PANDAR (Figure 3B). Therefore, we further studied miR-637. To investigate whether PANDAR is involved in the regulation of miR-637, the luciferase reporter was performed, which confirmed that PANDAR directly targets the 3'UTR of miR-637 (Figure 3C). Consistent with the in vitro results, the clinical sample analysis results also showed an inverse association between PANDAR and miR-637 in 30 thyroid gland carcinoma specimens (Figure 3D). Together, these findings indicate that PANDAR inhibits miR-637 expression by directly targeting its 3'UTR. 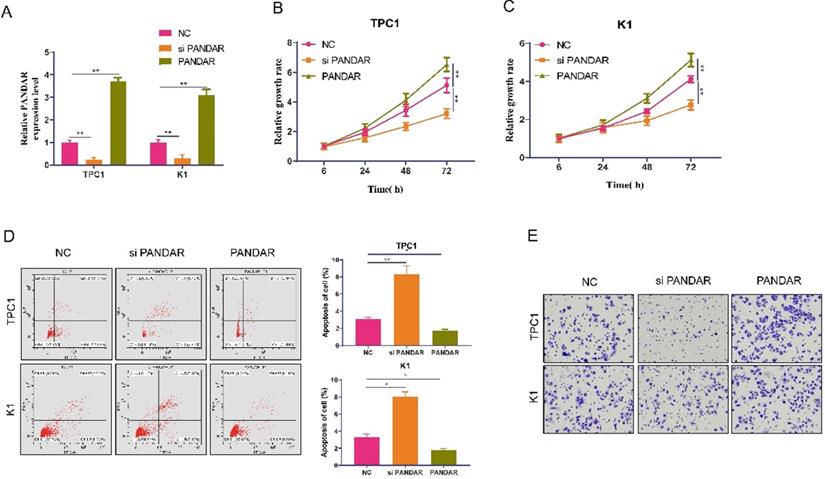 LncRNA-PANDAR is negatively correlated with miR-637. (A) Sequencing PANDAR overexpressing and negative control cells. The miR-637 had the lowest expression, the most significant difference. (B) Predicted binding site for 3'UTR of miR-637 and PANDAR sequences. (C) Luciferase reporter assay for miR-637 that directly targets PANDAR. (D) A negative correlation between the expression of PANDAR and miR-637 in thyroid gland carcinoma patients. * P <0.05, *** P <0.01. 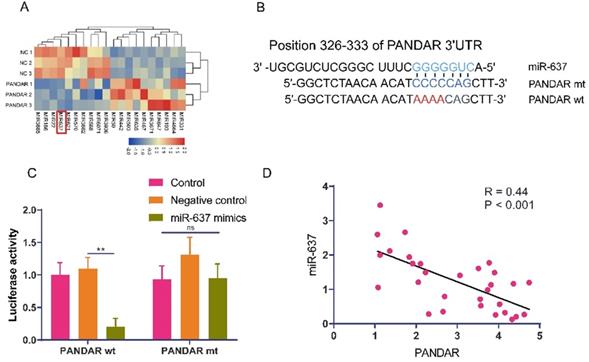 To investigate how miR-637 regulates proliferation and metastasis in thyroid gland carcinoma, we used TargetScan.org, miRDB.org, microRNA.org, and our transcriptome sequencing results to identify the target of miR-637. From the analysis, the Venn diagram showed that there were a total of 7 genes that were significantly different in all databases (Figure 5A). The expression of KLK4 was the most significantly different, and then, TargetScan predicted that miR-637 may directly target KLK4 (Figure 5B). Therefore, we investigated whether miR-637 regulated KLK4, and the luciferase reporter assay confirmed that miR-637 directly targets the 3'UTR of KLK4, as demonstrated by the significantly lower luciferase activity in the miR-637 mimics+KLK4-wt group (Figure 5C). The relationship was also confirmed in pancreatic cancer cells by qPCR (Figure 5D) and Western blot analysis (Figure 5E). Overall, these findings indicate that miR-637 inhibited KLK4 expression by directly targeting its 3'UTR. We also tested the relationship between PANDAR and KLK4. As shown in Figure 5F and 5G, not only could miRNA-637 affect the expression of KLK4, but PANDAR also affected the expression of KLK4, and upregulation of miR-637 could block the expression of KLK4 induced by PANDAR at both the mRNA (Figure 5F) and protein (Figure 5G) levels. PANDAR could regulate KLK4 expression by targeting miR-637.

As shown in Figure 7A and 7B, tumour volume and tumour weight were significantly increased when PANDAR was overexpressed. The tumour growth induced by PANDAR could be reversed by siKLK4 and miR-637 mimics. Consistent with these results, Ki-67 IHC assay (Figure 7C) results clearly showed that the tumour proliferation induced by PANDAR could be blocked by miR-637 mimics and siKLK4 in vivo. 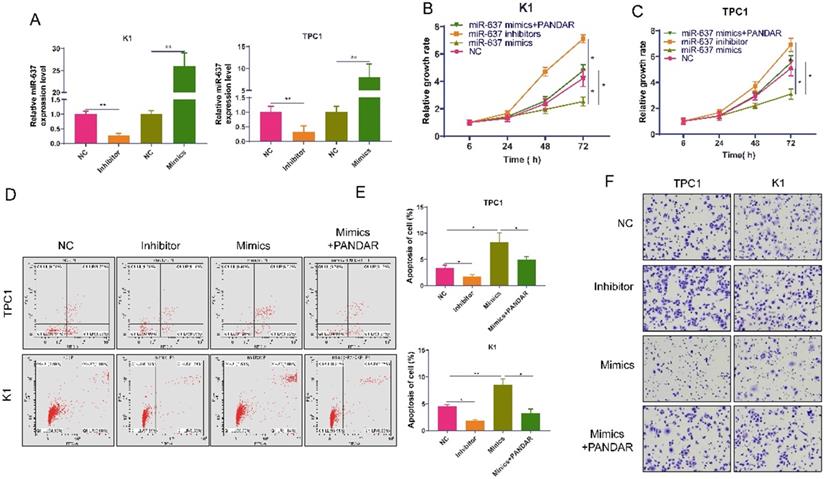 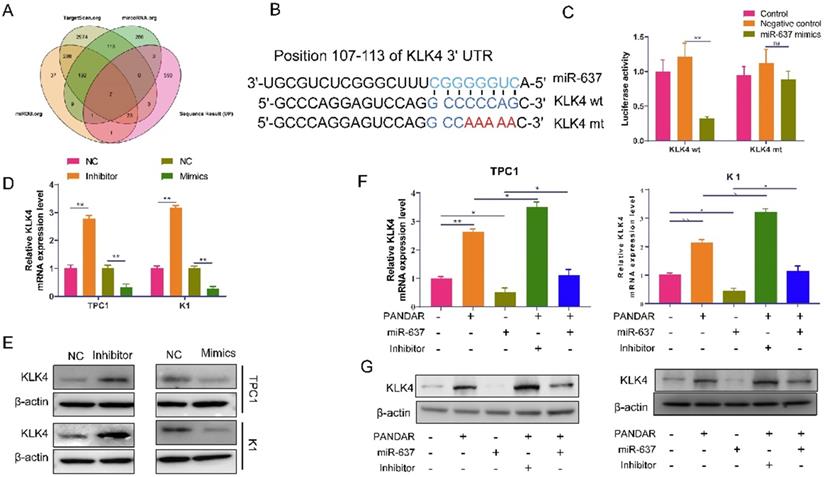 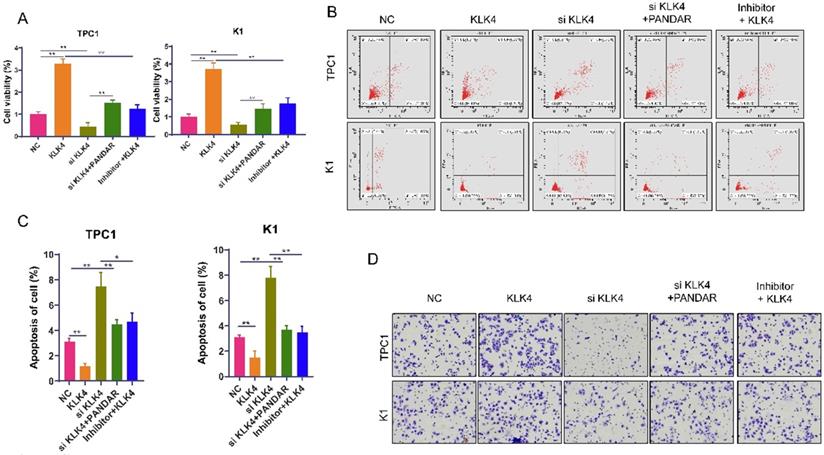 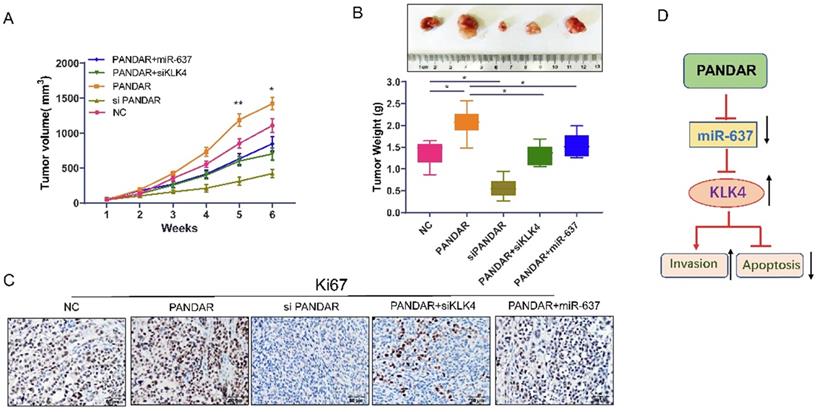 In this study, we clarified the anti-thyroid gland carcinoma mechanism of PANDAR. The data showed that knocking down PANDAR expression significantly inhibited thyroid gland carcinoma cell proliferation and colony formation, suggesting that PANDAR can promote thyroid gland carcinoma cell proliferation. These results were consistent with our previous studies [26]. Moreover, we searched for candidate microRNA targets of PANDAR (mirdb.org) and identified miR-637 as a candidate target of PANDAR. The luciferase reporter assay also showed that lincRNA PANDAR can target miR-637, and PANDAR can affect the proliferation and metastasis of thyroid tumours by regulating miR-637. Previous studies have shown that KLK4 can promote tumour proliferation, migration and invasion in ovarian cancer [27]. Here, we used a series of in vitro experiments to identify KLK4 as a target gene of miR-637 in TC. Our data showed that KLK4 expression was increased or downregulated in TC cells by the inhibition or ectopic expression of miR-637, respectively. In addition, a luciferase reporter assay showed that miR-637 directly targeted the 3'UTR of KLK4. Additionally, our data demonstrated that restoring miR-637 expression blocked the increase in KLK4 induced by PANDAR overexpression and that miR-637 promoted metastasis and proliferation. Our data are consistent with Zhang et al.'s report [27]. Cui et al. reported that the apoptosis of OSCC cells was enhanced by KLK4 silencing and that KLK4 regulated apoptosis-related proteins and suppressed apoptosis [28]. Therefore, we infer that PANDAR regulates KLK4 through miR-367 to affect tumour apoptosis and metastasis. We will continue to explore this hypothesis in future research. Taken together, these data suggest that PANDAR inhibits TC metastasis and proliferation through inhibition of miR-637 by targeting KLK4 (Figure 7D).

Taken together, our results indicate that downregulation of PANDAR expression inhibits cell proliferation and metastasis. Therefore, PANDAR may be a promising therapeutic target and a novel molecular biomarker for TC.

This study was supported by the Foundation of Sichuan Science and Technology Department (2019YJ0652), Medical Science Foundation of Cheng Du (2018003).

All data generated or analysed during this study are included in this published article.