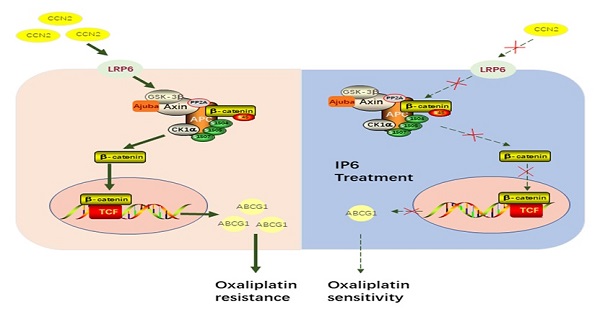 Hepatocellular carcinoma (HCC) is a drastic problem in China. Oxaliplatin, a platinum-based chemotherapy drug, has limited efficacy in treating HCC, characterized by intrinsic and acquired resistance. Inositol hexaphosphate (IP6), a carbohydrate abundant in grains, has contributed to the rising popularity of whole grain products consumption for the potential protection against dozens of diseases. However, the therapeutic potential of IP6 in halting the progression of HCC remains unclear, especially in combination with oxaliplatin. The anti-proliferation and anti-migration effects of IP6 were evaluated in vitro and in vivo. The synergistic and sequential anti-proliferative effect with IP6 and oxaliplatin were also evaluated in HCC. Finally, the role of CCN2-LRP6-β-catenin-ABCG1 signaling in oxaliplatin resistance and IP6 treatment was evaluated. We proved that IP6 treatment exhibited independent anticancer effect and synergistic anti-proliferative effects in combination with oxaliplatin in HCC. Specifically, up-regulation of ABCG1 and CCN2 were associated with oxaliplatin resistance. ABCG1 was acting as a downstream molecule of the CCN2-LRP6-Wnt/β-catenin signaling pathway in HCC cells. The IP6 treatment exhibited inhibition of CCN2-LRP6-Wnt/β-catenin signaling pathway and downregulation of ABCG1 in HCC cells. When combined with ABCG1 knocking down in HCC cells, the anti-proliferative effect of oxaliplatin was partly impaired in combination with IP6. We suggested that IP6 treatment renders HCC sensitive to oxaliplatin and breaking the CCN2-LRP6-β-catenin-ABCG1 signaling pathway is one of the mechanism after IP6 treatment.

Liver cancer, most commonly seen as hepatocellular carcinoma (HCC), has high prevalence and incidence rates in China, which accounts for more than 50% of the total number of liver cancer cases and deaths in the world [1]. One of the chemotherapeutic drugs for patients with advanced HCC is oxaliplatin, which initiates apoptosis by inhibiting the replication and transcription of DNA in HCC cells [2]. However, the efficacy of oxaliplatin on HCC is poor, exhibiting intrinsic and acquired resistance.

Traditional Chinese medicine (TCM) has been demonstrated to be effective for the treatment and improving drug resistance of HCC [3]. Whole grains are widely recommended as an integral part of healthy diets, especially in malignant tumor patient. In addition, evidence from previous studies have shown that grains may protect against various cancers [4]. Inositol hexaphosphate (IP6) is a naturally occurring polyphosphorylated carbohydrate that is abundant in grains and is shown to have broad-spectrum biological functions [5, 6]. Preliminary study has shown that IP6 could be a novel treatment for a wide variety of tumor [7]. However, the therapeutic potential and related molecular mechanism of IP6 in halting the progression of HCC remains unclear, especially in oxaliplatin resistance.

Previously, we generated an oxaliplatin-resistant HCC cell line and using cDNA microarrays found that the expression levels of 332 genes were significantly changed compared to control non-oxaliplatin-resistant HCC cells [8], including ATP-binding cassette family proteins and CCN family proteins. And we had also proved that CCN2 plays a promoting role in HCC progression and stemness maintenance through LRP6 [9] and MAPK [10] signaling pathways. ABCG1 is a cholesterol lipid efflux pump that plays a well-known role in tumor growth, conferring chemoresistance to various malignant tumors [11] and presenting a major obstacle for effective clinical cancer treatment [12]. The discovery of ABCG1 not only offered an explanation as to why treatment with oxaliplatin ultimately failed to eradicate the tumor, but it also had a profound impact on the current perception of drug resistance reversal [13]. Up to now, the relationship between CCN2 and ABCG1 in the maintenance of HCC oxaliplatin resistance, and the role and mechanism of IP6 in reversing oxaliplatin resistance are still vague.

In this study, we confirmed that IP6 treatment inhibited proliferation and migration in vitro and in vivo. Then, we separately proved the enhanced anti-proliferative effects of combined and sequential treatment with IP6 and oxaliplatin in HCC. Finally, we proved that ABCG1 was acting as a downstream molecule of the CCN2-LRP6-Wnt/β-catenin signaling pathway in HCC, and IP6 treatment resulted in the downregulation of ABCG1 and inhibition of CCN2-LRP6-Wnt/β-catenin signaling, while ABCG1 was not the only target of IP6 treatment on HCC cells. This study suggests a strategy for using IP6 to reverse intrinsic and acquired chemotherapy resistance of HCC in the clinic.

Cell migration was assessed by transwell assays as described previously (Boyden chambers, Corning, Flintshire, UK) using MHCC97H and Hep3B [14]. Then, 5 × 104 cells in serum free DMEM with 1 mM IP6 were seeded into the upper chamber of each well on the membrane (8.0 μm pore size) of a 24-well plate. DMEM containing 10% fetal bovine serum (FBS) was added to the lower chamber of each well. After 48 h, cells reaching the underside of the membrane were stained with Giemsa (Sigma-Aldrich) and counted at × 200 magnification.

The expression levels of CCN2, ABCG1, and Wnt signaling protein levels were determined by immunoblot assay according to the manufacturer's instructions. The total protein concentrations extracted from the cells were determined using the BCA protein assay kit (Beyotime Biotechnology, China). The following primary antibodies were used: anti-ABCG1 (1:1,000), anti-LRP6 (1:1,000) and anti-phospho-LRP6 (1:500), anti-β-catenin (1:1000), anti-CCN2 (1:1000), and β-actin (1:1000). Immunoblot reagents were purchased from Beyotime Biotechnology. Tumor tissue was fixed, embedded, and sliced into 5 μm thick sections. Immunohistochemical staining of CCN2 (1:300) and ABCG1 (1:500) was carried out using a standard protocol [15].

HCC cells (5 × 104) were suspended in the appropriate amount of sphere-forming medium (DMEM + 15% FBS + 5% Matrigel matrix) in low-adhesion 6-well plates (Corning, New York, USA) for 3 weeks. Cells were treated with IP6 concentrations: 1 mM for MHCC97L and 0.5 mM for Hep3B cells. After 3 weeks, cells were photographed at 5 × magnification.

In vivo evaluation of tumor proliferation and metastasis

MHCC97L cells were harvested, washed, and resuspended in PBS. Then 5 × 106 cells (0.1 ml cell suspension) were injected into the left lobe livers of 4 weeks-old male BALB/c nu/nu mice. Each group contained 6 mice, and experimental group mice were treated orally with IP6 (2 mg /kg/d). Five weeks later, animals were sacrificed and subcutaneous tumor weights were evaluated. The numbers of lung metastatic nodules were evaluated by microscopy of serial sections of the right lung tissue block which is on behalf the entire pulmonary metastasis. Intraperitoneal injection of pentobarbital (5 mg/kg) combined with cervical spondylolisthesis was used for the killing of mice after the study. And this method was reported by our group in previous research [10]. The study protocol was approved by the ethics committee on Experimental Animals of Northwestern Polytechnical University, and all methods were performed in accordance with the relevant guidelines.

IP6 directly inhibited the ability of proliferation and migration in HCC 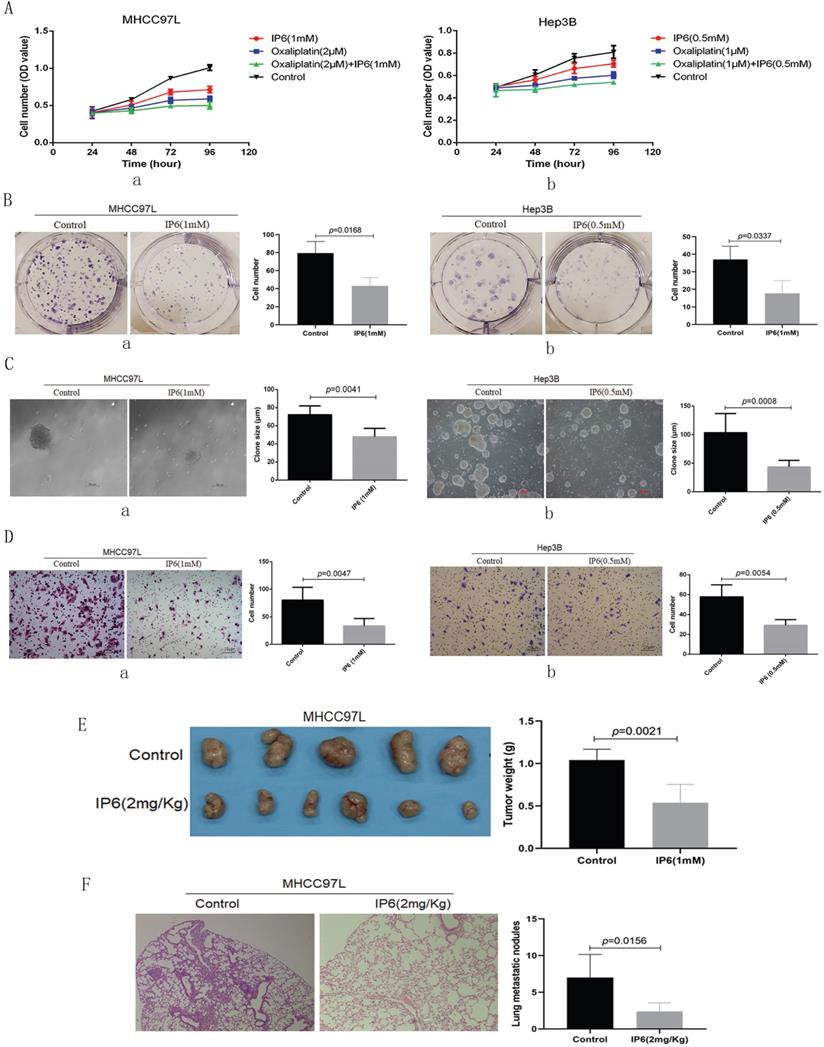 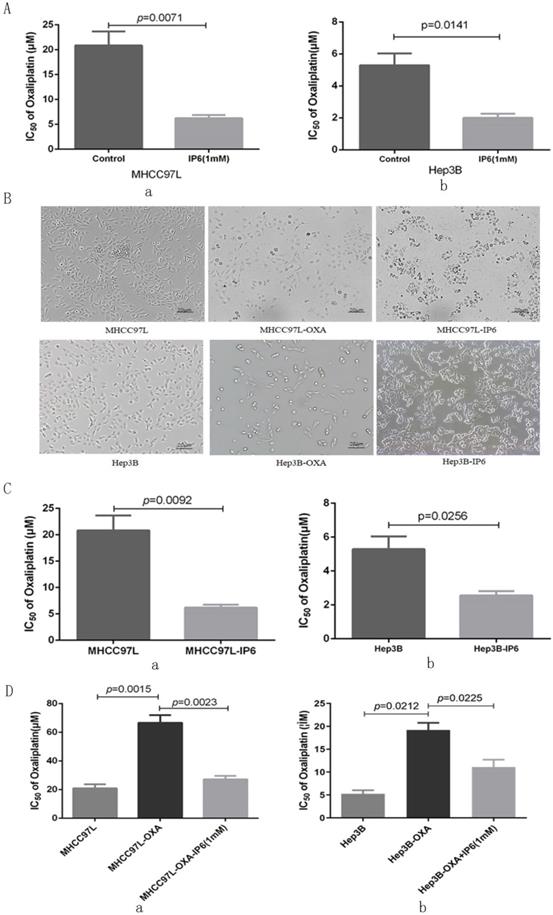 Cell viability was evaluated following combination treatment with oxaliplatin and IP6. The MHCC97L and Hep3B HCC cell lines exhibited synergistically enhanced anti-tumor efficacy with combination treatment with the two drugs resulted in the lowest proliferation rate (Figure 1A). We next explored MHCC97L (6.22 ± 1.13 μmol/L vs. 20.85 ± 4.86 μmol/L; p = 0.0071; Figure 2A, a) and Hep3B (2.01 ± 0.46 μmol/L vs. 5.29 ± 1.29 μmol/L; p = 0.0141; Figure 2A, b) cells exhibited significantly decreased oxaliplatin IC50 values when treated in combination with IP6 compared to oxaliplatin treatment alone, thus indicating a synergistic anti-proliferative effect.

To investigate the effect of CCN2 on ABCG1 expression and the associated Wnt/β-catenin signaling pathway signaling, we treated MHCC97L cells with recombinant CCN2 in increasing concentrations, and found that CCN2 was able to activate Wnt signaling with concomitant upregulation of LRP6, phosphorylated LRP6, and β-catenin, and ABCG1(Figure 4A, a). And this trend was confirmed in another HCC cell line Hep3B after treated with CCN2 in increasing concentrations (Figure 4A, b).

Additionally, we investigate the effect of ABCG1 on CCN2 expression using RNA interference. After the expression of ABCG1 was knocked down, we found that the downregulation of LRP6, phosphorylated LRP6, and β-catenin, but the level of CCN2 exhibited no significant decrease in expression. Following gene rescue of ABCG1, the expression of LRP6, phosphorylated LRP6, and β-catenin was restored (Figure 4B, a). And this trend was also confirmed in another HCC cells Hep3B in the same way (Figure 4B, b). Therefore, we confirmed that CCN2 was the upstream regulatory gene of ABCG1 in HCC. 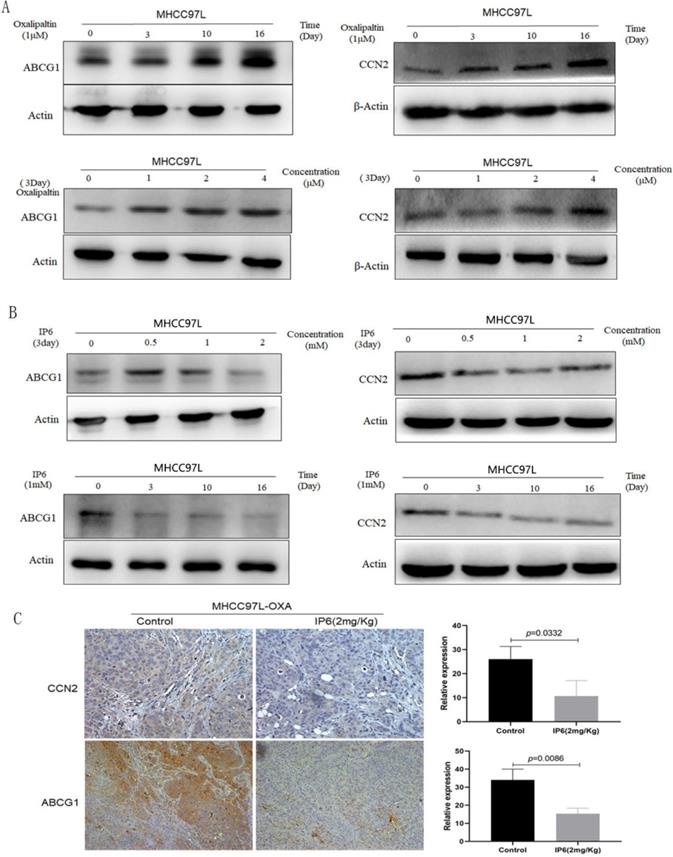 ABCG1 was a downstream molecule of the CCN2-LRP6-Wnt/β-catenin signaling pathway in HCC. (A) MHCC97L treated with recombinant CCN2 in increasing concentrations was able to activate Wnt signaling with concomitant upregulation of LRP6, phosphorylated LRP6, and β-catenin, and ABCG1 (a), and the trend was confirmed in Hep3B (b). (B) The downregulation of LRP6, phosphorylated LRP6, and β-catenin was proved after ABCG1 knocking down in HCC cell lines, and the trend was reversed following gene rescue of ABCG1 (a), and the same trend was also confirmed in Hep3B (b). 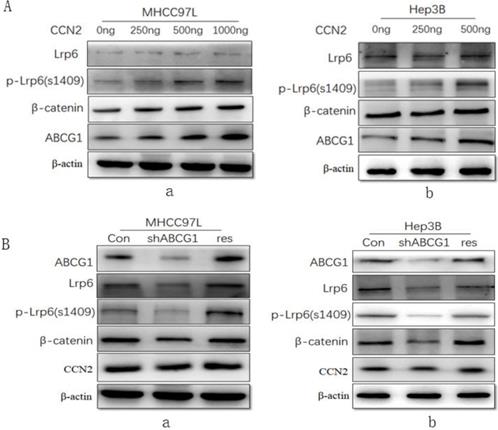 For HCC patients with advanced stage disease, transcatheter arterial chemoembolization (TACE) and systemic chemotherapy are usually the treatments of choice [16]. Although oxaliplatin is widely used in the treatment of advanced malignancies, its long-term treatment outcomes are far from being satisfactory, due to the presence of both intrinsic and acquired resistance. Previously, our group showed that residual HCC in oxaliplatin treatment underwent EMT, acquired increased oxaliplatin resistance and demonstrated increased pulmonary metastatic potential [17]. Therefore, methods to enhance oxaliplatin treatment responses are urgently needed.

The consumption of whole grains and whole grain products has gained popularity because of potential protection against cancer [18]. Whole grain phytochemicals regulate cellular signal transduction pathways and hence affect cancer cell behaviors such as proliferation, apoptosis, and invasion [19]. IP6 is a naturally occurring polyphosphorylated carbohydrate that is abundant in grains and is known to act as a broad-spectrum anti-neoplastic agent. Its potential role as a combination therapy agent with oxaliplatin to date has been unexplored. In the present study, IP6 not only inhibited proliferation and migration in HCC cells, demonstrating individual value in the treatment of malignancies as shown in previous papers [20-22], but IP6 also exhibited a synergistic anti-proliferative effect when used in combination with oxaliplatin. HCC cells pre-treated continually with increasing concentration of IP6 also exhibited lower proliferation rates with enhanced chemosensitivity to oxaliplatin. All these findings suggest that IP6 reversed the tolerance of oxaliplatin-resistant HCC cells with a synergistic anti-proliferative effect.

ABCG1 is an ATP-binding cassette transporter and has a major role in inducing cellular cholesterol efflux to high-density lipoprotein (HDL) particles. ABCG1 deficiency in macrophages and smooth muscle cells leads to reduced cholesterol efflux and apoptosis [11, 23]. It was also demonstrated that ABCG1 promotes the migration and invasion as a potential oncogene and therapeutic target in tumor cells [11, 24]. We showed here that ABCG1 upregulation was involved in oxaliplatin resistance. Silencing ABCG1 using specific shRNA in HCC cells resulted in decreased oxaliplatin IC50 values, significantly reversing the oxaliplatin resistance. Our data also suggested ABCG1 was a downstream molecule of the CCN2-LRP6-Wnt/β-catenin signaling pathway in HCC. IP6, originating as a natural ingredient of whole grains, inhibited CCN2-Wnt/β-catenin signaling and downregulated ABCG1 expression levels in HCC cells, and therefore indicating CCN2-LRP6-Wnt/β-catenin-ABCG1 signaling was one of the mechanisms of IP6 treatment in HCC. 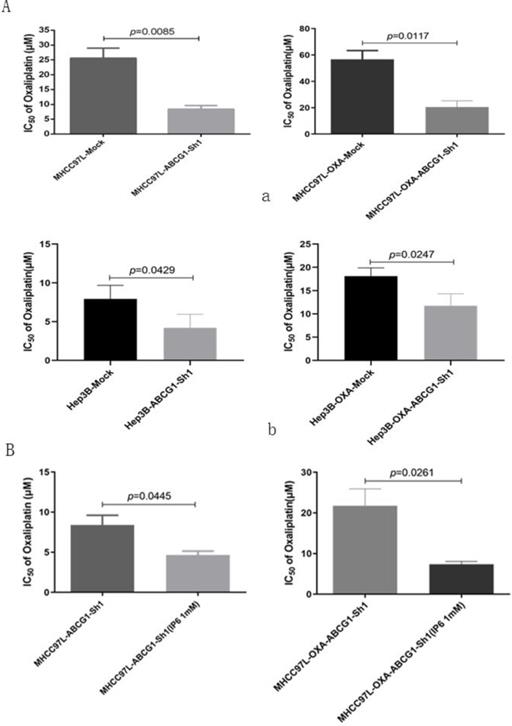 Evidence has shown that whole grains may protect against various cancers, and IP6 is a naturally occurring polyphosphorylated carbohydrate that is abundant in grains. In the present study, we demonstrated that combined chemotherapy with oxaliplatin and IP6 synergistically induced sensitizing effects in oxaliplatin-resistant HCC cells, providing a good alternative for combination or sequential therapy using IP6 for treatment of HCC.

This research project was supported by the Fundamental Research Funds for the Central Universities (31020200QD032), and Natural Science Basic Research Program of Shaanxi Province (2021JM-080).

XL and QAJ contributed to the study design, analysis, and interpretation of data. QAJ conceived the study. XL performed the majority of the experiments. YYZ, BHX and participated in the in vitro experiment. AA proofread and polished language. XL participated in statistical analysis. QAJ drafted and prepared the manuscript. All authors approved the final manuscript.

The datasets used and/or analyzed and materials developed during the current study are available from the corresponding author by reasonable request.