Conclusion: Elevated XRCC2 and XRCC9 expression levels were observed in normal ovarian cells and tissues than that in ovarian malignance cells and tissues, and exhibited better prognostic value especially in patients with serous, poor differentiated and late stage, suggesting that XRCC2 and XRCC9 may be potent prognostic markers in ovarian cancer patients and can guide personalized surveillance for ovarian malignance.

Ovarian carcinoma is one of the common causes of cancer death in women in the world [1]. In the United States, more than twenty thousand patients with ovarian carcinoma will be diagnosed and over ten thousand cases will die due to this disease in 2021 as estimated [2]. Many studies have demonstrated that surgical cytoreduction accompanied with subsequent platinum-based chemotherapy is optimal treatment for advanced ovarian cancer [3]. Although great efforts have been made to make progressions in early detection and treatment, population-based incidence and mortality of ovarian cancer remain high [4]. Further research focusing on the update of new biomarkers to predict the prognosis, in some ways, will be likely to enhance the survival of ovarian carcinoma patients for progression-free survival (PFS) and overall survival (OS) in ovarian carcinoma patients.

The XRCC family is composed of ten sub-classes (XRCC1-9 and XRCC11) [4]. XRCC genes have been identified as pivotal factors in the protection of mammalian cells from ionizing radiation damages [5]. Furthermore, XRCC genes have also implicated in the processes of DNA repair in mammalian, particularly in double-strand break repair, which perhaps participate into gynecological tumors [6-8].

In addition to the importance of XRCCs in DNA repair, XRCCs have been identified as significant factors in the prognostic value of various solid tumors [9-11]. Nevertheless, at the transcriptional expression levels, the prognosis of individual XRCC gene in patients with ovarian carcinoma remains unknown. In the present research, we explored the prognostic value of XRCC family with various clinical features. Furthermore, the transcriptional level and protein expression of some XRCCs were also assessed in normal ovarian cells and tissues and ovarian cancer cells and tissues. Therefore, our aim is to detect the significant prognostic role of some XRCCs, which may guide personalized ovarian cancer surveillance.

KM plotter, an online database [12], was utilized to detect the OS as well as PFS of XRCC genes at transcriptional level (http://kmplot.com/analysis/). Notably, this database was capable of assessing the prognostic value of multiple genes in ovarian carcinoma patients with average follow-up time of 40 months. The background of databases contained breast carcinomas [12], lung carcinomas, and gastric as well as ovarian carcinomas [13]. In addition, clinical data of patients, including TP53 mutation status, grade, stage, histology and applied chemotherapy, was also involved in KM plotter. Shortly, the XRCC family was searched in the KM plotter database to obtain the PFS and OS. The samples were separated into 'low' and 'high' groups via established cutoffs. The Kaplan-Meier survival plot, 95% confidence intervals (CIs), hazard ratio (HR), and log-rank P value were displayed on the webpage.

The IOSE, ES2 and OVCAR3 cells were seeded at 3×105/well in a 6-well cell plate with small glass slides and cultured overnight. Cells were washed with PBS and fixed with paraformaldehyde (4%) for 30 min at room temperature. Then, washing cells three times with PBS and 0.1% Triton/PBS for 10 min. After blocking cells with blocking buffer (2% BSA/0.1%Tween20/PBS) for 30 min at room temperature. Then incubating cells with rabbit XRCC2 (Abcam, ab180752, 1:100 dilution) and rabbit XRCC4 (Abclonal, A18046, 1:50 dilution) and rabbit XRCC9 (Proteintech,10215-1-AP, 1:50 dilution) overnight at 4°C. After being washed with PBS, the smears of cells were stained with FITC-conjugated anti-rabbit IgG antibodies at room temperature for 1 h. Then stained with DAPI, aqueous, fluoroshield mounting medium (Abcam, ab104139). The slides were observed and imaged using a fluorescence microscope, and calculated by ImageJ.

Human ovarian malignant tissues and normal healthy ovary tissues were heated 1 h at 65˚C for deparaffinization and then incubated in sodium citrate buffer with microwave 20 min. Then washing the sections twice with PBS and bovine serum albumin (3%) blocked for 40 min and incubated with primary antibodies (XRCC2, ab180752, 1:100; XRCC4, 15817-1-AP, 1:100; XRCC9, ab115230, 1:100) overnight at 4°C. Next day, goat anti-rabbit or donkey anti-goat antibodies (ZSGB-BIO, China) were used as second antibodies. Then, followed 3,3'-Diaminobenzidine staining and hematoxylin counter-staining, the sections were dehydrated via xylene, mounted and cover slipped. Negative control and positive control were set in every test. The staining level was based on semi-quantitative immunohistochemical detection, which multiplied the staining intensity score (negative for 0, weak for 1, moderate for 2, strong for 3) and the percentage score (positive cells 1-25% for 1, 26-50% for 2, 51-75% for 3, >75% for 4). The analysis of IHC images was in a blind manner. The pathological results of these IHC images from the normal ovarian tissues and ovarian cancer tissues were unclear for Y.L. and Y.X. And the evaluation and protein staining quantification of IHC images were performed independently by Y.L. and Y.X. Then samples were individually discussed until consensus was reached.

Data analysis was processed with Graph Pad Prism 6.0 software and assessed via using unpaired t-tests with Welch's correction. Data were displayed as mean ± standard deviation. It was recognized as statistically significance when P value <0.05.

In order to investigate expression of XRCCs at mRNA levels in ovarian cancer patients, analyses focusing on the prognostic function of individual XRCC family via the KM plotter were conducted. All XRCC family members could be found in the database except XRCC8 and XRCC11, probably due to the low level of XRCC8 and XRCC11 in tissues. Considering the fact that molecular events, risk factors, therapeutic targets, and prognostic markers might vary in different subtypes of ovarian carcinomas, the significant prognostic value of XRCC family was then evaluated in all ovarian carcinoma patients.

The PFS and OS of XRCCs in all ovarian carcinoma patients 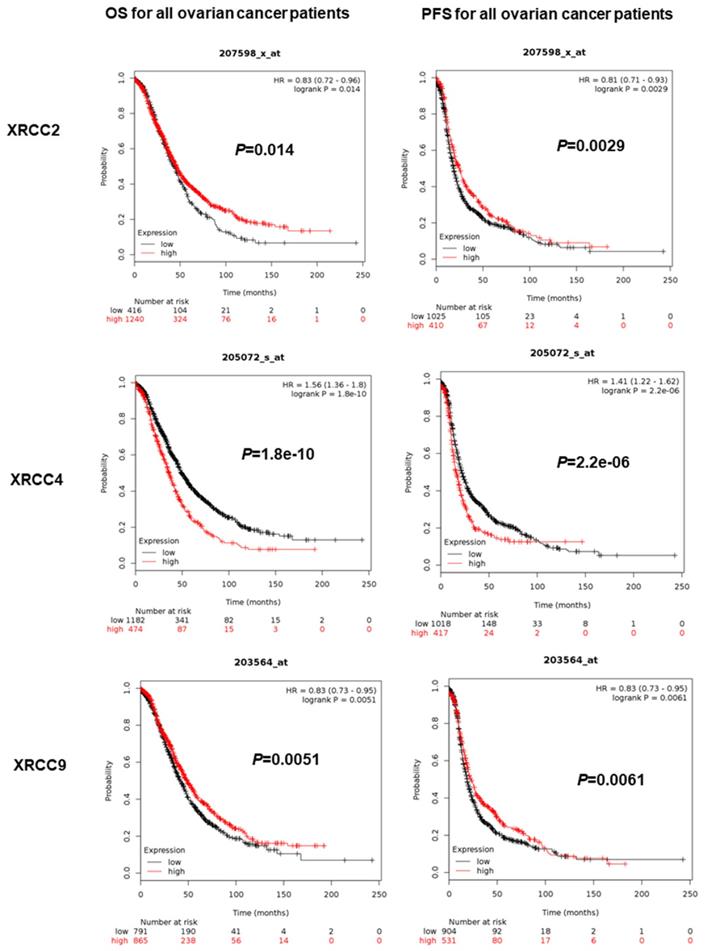 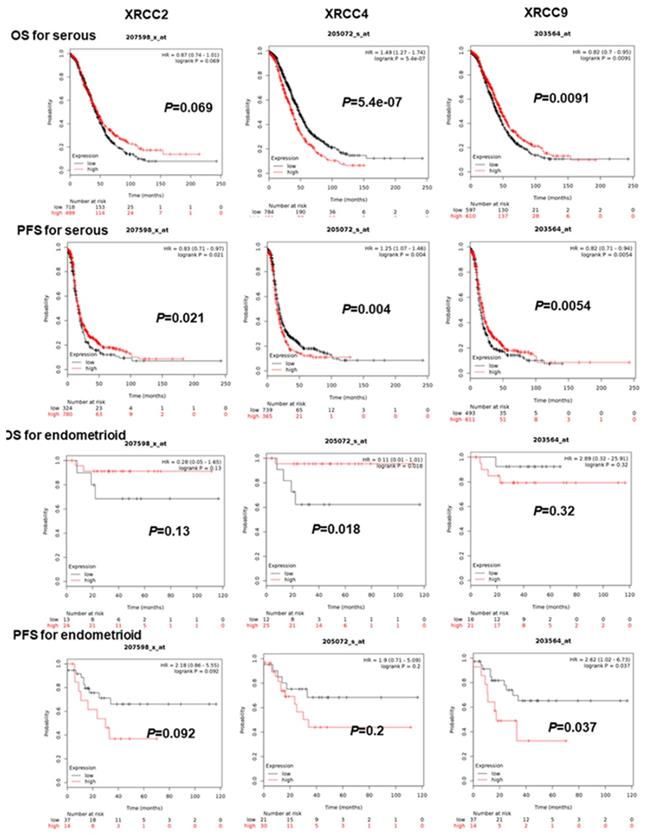 Correlation of XRCC2, XRCC4 and XRCC9 expression with PFS and OS in ovarian cancer patients with different pathological grades

The mRNA and protein expression of XRCC2, XRCC4 and XRCC9 in normal ovarian cells and ovarian carcinoma cells

The protein level of XRCC2, XRCC4 and XRCC9 in tissues from ovarian carcinomas and normal ovary 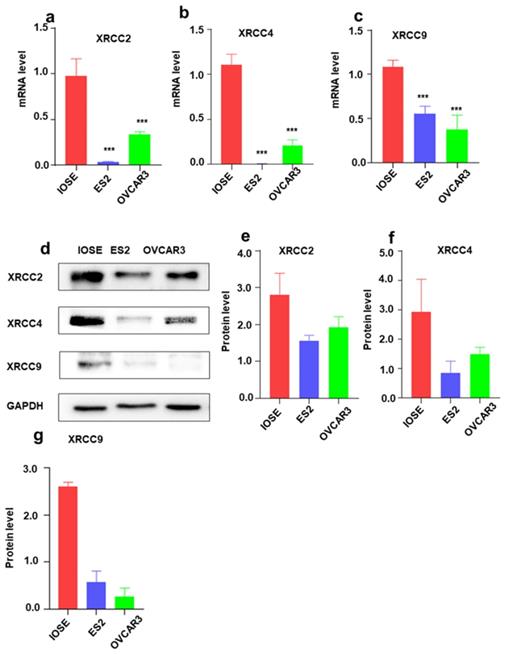 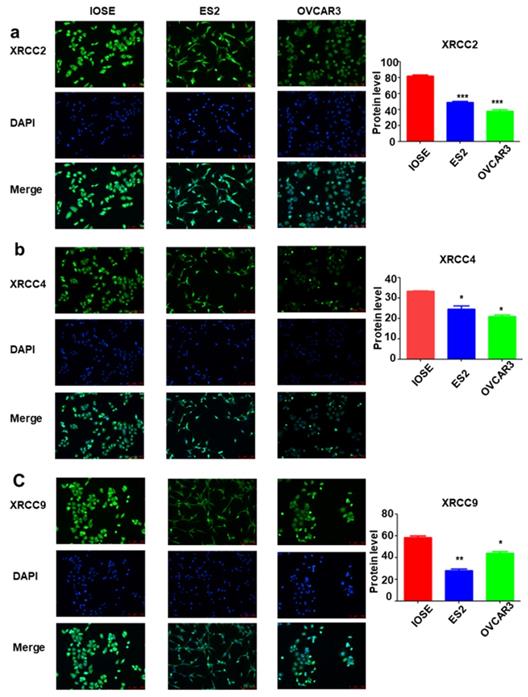 XRCC2, a crucial factor for homologous recombination [14], is also a DNA repair gene and could be connected to various cancers [15, 16]. An elegant study has identified XRCC2 as a potential tumor-suppressor gene in mammals [17]. However, XRCC2 might have diverse roles in progression and tumorigenesis of ovarian carcinoma, and the results of previous researches were inconsistent. Yuan and colleagues [18] failed to find a significant involvement between ovarian cancer risk and XRCC2 rs3218536 polymorphism through a meta-analysis recruiting 5802 cases and 9390 controls. But most recently, one study has reported that XRCC2 rs3218536 was significantly linked to risk of ovarian carcinoma under dominant contrast (AA+AG vs. GG) in overall population, especially among Caucasians [19]. Similarly, Michalska and colleagues [20] conducted an experiment with 700 ovarian carcinoma patients and 700 healthy subjects, and revealed a significant increase of the XRCC2 188Arg/His and 188His/His heterozygote frequencies in ovarian carcinomas than that in healthy subjects, which indicated that XRCC2 Arg188His polymorphisms might be positively linked to ovarian malignances in Polish population, especially in grade I ovarian carcinomas. However, a meta-analysis by He et al. [21] demonstrated a completely opposite conclusion that XRCC2 rs3218536 polymorphism might be most closely linked to decreased risk of developing ovarian carcinomas. In this study, higher expression of XRCC2 mRNA and protein levels was observed in normal cells than that in ovarian carcinoma cell lines. Additionally, XRCC2 was also lowly expressed in ovarian cancer tissues, and indicated a better survival for ovarian malignance patients, However, in stage I and II ovarian carcinoma, the high XRCC2 expression was linked with a poorer PFS, which may be due to the different role of XRCC2 gene in early stage and late stage. To date, our findings display the expression level and predictive value of XRCC2 in ovarian carcinoma, implying that XRCC2 might be a favorable prognostic indicator for ovarian cancer, particularly in patients with serous, poor-differentiated and late stage.

XRCC4 participates in the process of Ku70/Ku80 heterodimer coupled with DNA ligase IV to act as an essential marker in DNA double-strand break repair [7, 8]. XRCC4 was well studied in diverse human tumors such as lung carcinoma [22] and bladder carcinoma [23], which was reported as a poor productive factor in these cancers. p53 has been identified as an essential role in the XRCC4 associated double-strand break repair in the neural development [24]. Additionally, the mutation of p53 phosphorylation at Ser18 and 23 (p53S18/23A) could completely rescue embryonic lethality of XRCC4-deficient mice and was able to suppress tumorigenesis in XRCC4-deficient mice [25]. And ablation of XRCC4 in combination with p53 will induce brain tumors efficiently [26]. These results imply that XRCC4 depletion is more likely to induce p53-dependent cell death in ovarian cancer. Interestingly, the function of XRCC4 in ovarian carcinoma remains mysterious. One paper by Willis et al. [27] recommended the increased expression of XRCC4 might be a prognostic factor predicted poor outcome in ovarian serous cancer. In line with this meta-analysis, our results discovered higher expression of XRCC4 protein in tissues from ovarian carcinoma patients than that from healthy controls, and elevated level of XRCC4 mRNA was significantly linked to worse survival for ovarian malignance patients, particularly in serous, grade III and all stages, implying XRCC4 might be a poor prognostic biomarker in ovarian carcinomas. Nevertheless, the high XRCC4 expression was correlated with a favorable OS in endometrioid ovarian carcinomas, which may be attributed to the less number of cases of endometrioid ovarian carcinomas in the database. Another reason may be that XRCC4 is more likely to play a different role in different pathological types of ovarian cancer. Therefore, XRCC4 may not be used as a clear indicator of the prognosis of ovarian cancer. However, the transcriptional level and protein level in normal ovarian cells were elevated than ovarian carcinomas cells, which were not consistent with the tissue results. The reason for this phenomenon may be attributed to the immortalization of cells affecting gene expression. 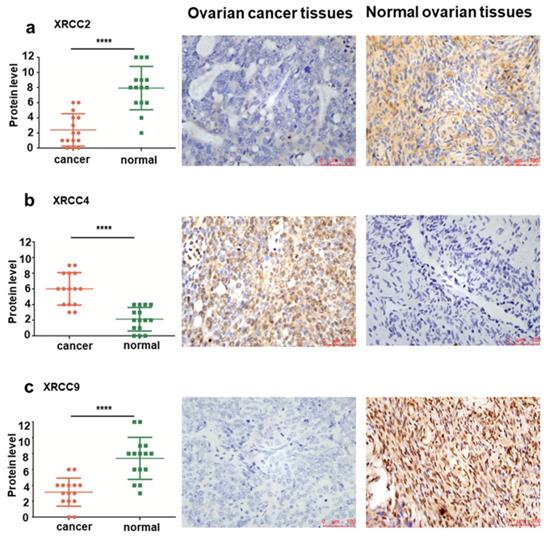 Compared with XRCCs mentioned above, the function of XRCC9 in malignancies is little known. It has been observed that XRCC9 (Thr297Ile) gene was correlated to a low risk of development of lung carcinomas, implying that XRCC9 may act as a protective gene in non-small cell lung carcinoma [28]. In the present study, higher mRNA and protein levels of XRCC9 were observed in normal ovarian cell and tissues as compared to ovarian carcinoma cell lines and tissues, suggesting XRCC9 plays a pivotal role in the progression of ovarian cancer. In addition, our research discovered that higher mRNA level of XRCC9 predicted the better survival for all ovarian carcinoma patients, particularly in patients with serous, poor-differentiated and late-stage. Therefore, XRCC9 is more likely to be a protective prognostic biomarker for ovarian carcinoma.

This work was support of Integrated Traditional and Western Medicine of Zhejiang Province (No.2017-XK-A42).

This study was approved by the Ethical Committee of the Second Affiliated Hospital of Wenzhou Medical University.