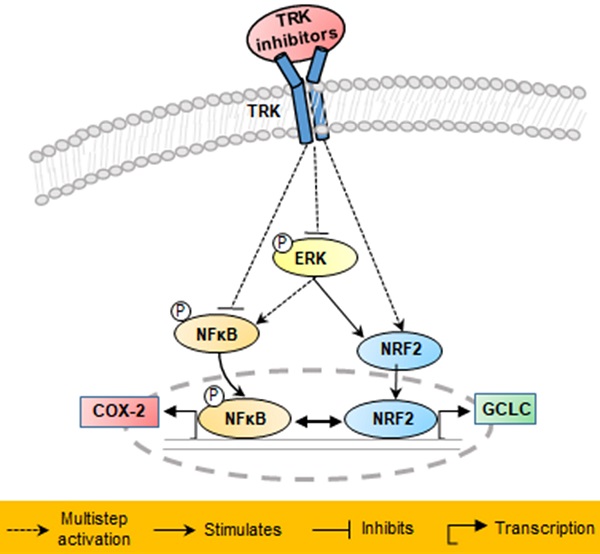 Tropomyosin receptor kinase (TRK) fusion is one of the oncogenic driver causes of colon cancer, and tropomyosin 3-neurotrophic receptor tyrosine kinase 1 (TPM3-NTRK1) fusion has been detected in the KM12SM cell line. In the present study, we investigated anticancer mechanisms in the KM12SM cell line using three different form of dovitinib (dovitinib (free base), dovitinib lactate (mono acid), and dovitinib dilactic acid (diacid)) and four TRK inhibitors (LOXO-101, entrectinib, regorafenib, and crizotinib). Exposure of TRK inhibitors at concentrations of 10 nM resulted in the apoptosis of KM12SM cells, whereas regorafenib had no effect. Treatment with all inhibitors except regorafenib also significantly increased the expression levels of the genes nuclear factor-erythroid 2-related factor 2 (NRF2) and glutamyl cysteine ligase catalytic subunit (GCLC) in KM12SM. These drugs significantly reduced expression of the phosphorylated proteins NFκB and COX-2 in the KM12SM cell line, and significantly attenuated KM12SM cell migration, according to a Transwell migration assay. Together, these results suggest that TRK inhibitors block products of carcinogenesis by negatively regulating the NFκB signaling pathway and positively regulating the antioxidant NRF2 signaling pathway.

Colorectal cancer can be caused by genetic mutations. Despite improved colonoscopy techniques, only 38% of colorectal carcinomas are detected at an early stage [1]. Gene rearrangements, the most type of common molecular alteration, confer oncogenic properties to genes. Therefore, the treatment approach for colorectal cancer patients should carefully consider the molecular profile of the tumor [2].

The tropomyosin receptor kinase (TRK) family (TRK A-C) are major oncogenic drivers of various cancers, such as colorectal cancer, thyroid cancer, glioblastoma, cholangiocarcinoma, and lung cancer [3-5]. TRK mutations are mutually exclusive with other oncogenic drivers, which makes TRK-positive cancer a distinct disease entity, similar to other oncogene-addicted cancers such as c-MET and ALK [6]. Multi-kinase agents have activity against TRK A-C, but differ in their activity against other kinases. Many chemo preventive mechanisms have been shown to induce apoptosis and detoxification enzymes, including antioxidative enzymes, and inhibit inflammation and tissue invasion [7-10].

Nuclear factor erythroid 2-related factor 2 (NRF2) regulates the expression of antioxidative enzymes such as glutamyl cysteine ligase catalytic subunit (GCLC) [11], which plays multiple roles against oxidative stress. NRF2 also reduces the expression of inflammation factors such as cyclooxygenase-2 (COX-2) [12, 13], and previous studies have shown that the NFκB pathway is involved in inflammation and carcinogenesis. Therefore, the aim of this study was to determine whether a range of TRK inhibitors might exert anticancer effects via the NFκB/NRF2 pathway. Using apoptosis, gene, protein, and cell migration analyses and three different form of dovitinib (dovitinib (free base), dovitinib lactate (mono acid), and dovitinib dilactic acid (diacid)) and four TRK inhibitors (LOXO-101, entrectinib, regorafenib, and crizotinib) TRK inhibitors, we tested this hypothesis in the KM12SM cell line through tropomyosin 3-neurotrophic receptor tyrosine kinase 1 (TPM3-NTRK1) fusion.

A Transwell migration assay was performed using a 24-well Transwell chamber (8.0-μM-diameter pores) inserted into 24-well plates. We added 1 × 104 cells in 300 μL serum-free RPMI 1640 medium to the upper chamber. NTRK inhibitors were diluted in RPMI 1640 medium to a final concentration of 10 nM and added to the lower chamber of each well. After 24 h of incubation, the medium and unmigrated cells in the upper chamber were removed, and the lower sides of the membranes were fixed with methanol and stained with hematoxylin and eosin. Images were taken using bright field microscopy (200× magnification).

To evaluate the effects of NTRK inhibitors on cell death in KM12SM, HCT116, and HT29 cells, we examined apoptosis by staining with annexin V-APC/PI, followed by flow cytometry (Figure 2), to assess early apoptotic and late apoptotic cell populations. Among the cell types, the death rate was best for KM12SM cells with LOXO-101, entrectinib, dovitinib, dovitinib lactate, dovitinib dilactic acid, cabozantinib, and crizotinib treatment. Apoptosis was seldom observed in HCT116 and HT29 cells (Figure 2). The addition of 10 nM regorafenib to KM12SM cells for 48 h had no significant effect on cell death.

Effects of neurotrophic receptor tyrosine kinase (NTRK) inhibitors on colon cancer cells with or without NTRK gene fusion. KM12SM, HCT116, and HT29 cells were treated with various concentrations of NTRK inhibitors for 48 h. 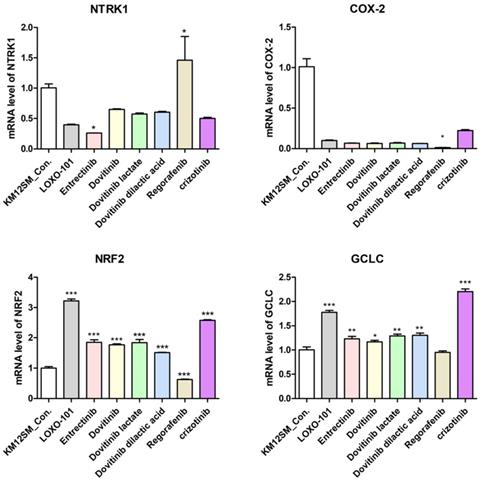 TPM3-NTRK1 was originally identified in cases of colorectal cancer [14, 15]. TRK gene fusion is a highly therapeutically actionable driver of tumor growth. Several tumors are associated with gain-of-function mutations of genes coding for both serine/threonine and tyrosine kinases [16]. TRK gene fusion is also characterized by ligand independent kinase activity and can occur in humans in a mutually exclusive manner with respect to other oncogenic drivers [3, 17]. Although numerous 5' gene fusion partners have been identified, all studied variants appear to respond to targeted therapy [18, 19]. In this study, we aimed to identify effective TRK inhibitors and determine whether they have anticancer effects via activation of the NFκB and NRF2 pathways in KM12SM cells with TPM3-NTRK1 fusion.

We found that three different form of dovitinib and four TRK inhibitors from a TRK inhibitor screening library, i.e., dovitinib, dovitinib lactate, dovitinib dilactic acid, LOXO-101, entrectinib, regorafenib, and crizotinib, all reduced the viability of KM12SM cells in vitro; therefore, these compounds were selected for the present study. LOXO-101 had no effect on the HCT116 and HT29 cell lines, which lack TRK fusion, whereas a low dose (10 nM) of the other drugs affected all three cell lines, with and without TRK fusion (Figure 1). Apoptosis in KM12SM cells was highly induced (> 50%) by a low dose (10 nM) of each TRK inhibitor, except regorafenib, whereas these drugs had very little effect on HCT116 and HT29 cells (Figure 2). The balance between cell division and apoptosis depends on both oxidative stress and the mutation of important signaling molecules [11, 20]. NRF2 is an antioxidant/detoxification enzyme that reduces oxidative injury and positively regulates the transcriptional activation of GCLC genes [21, 22]. NRF2 also confers protection against carcinogenesis [23]. However, a previous study reported that NRF2 was resistant to activation by chemotherapeutic agents [24]. NRF2 is also activated by protein kinase signaling, which involves Akt and extracellular-related kinase (ERK) [25, 26]. These Akt and ERK kinases signals may be required for subsequent NRF2-dependent transcription in the context of resistance to chemotherapeutic agents. In this study, low-dose drug delivery may have been associated with NRF2 signaling, which induces the expression of GCLC antioxidant genes; these drugs also suppressed COX-2, ERK, and phospho-ERK enzyme activity (Figures 3, 4 and 6). All of the TRK inhibitors attenuated NFκB signaling (Figure 4 and 6). Our Transwell migration assay revealed that all of the tested TRK inhibitors suppressed KM12SM cell migration (Figure 5). 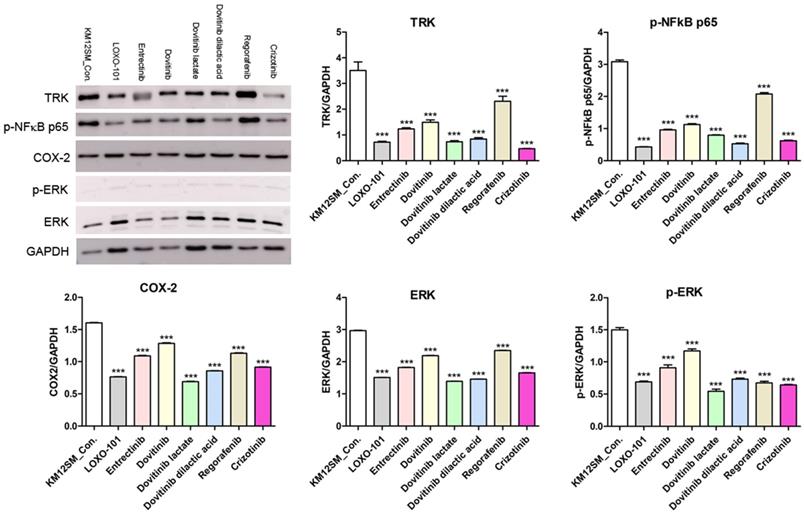 Transwell migration assay. Representative microscopic images of cells that migrated through the Transwell during the migration assay (hematoxylin and eosin staining, 200× magnification). 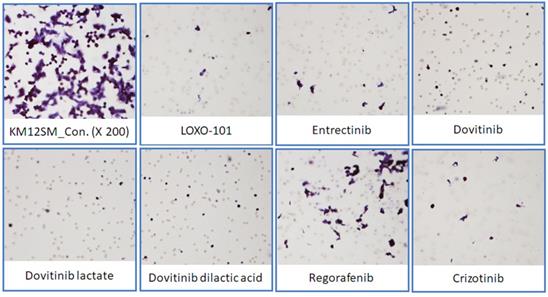 Schematic of proposed mechanisms involved in the anti-cancer effects in KM12SM cells of NTRK inhibitors. 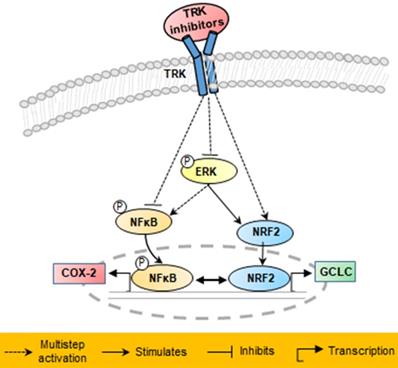 This research was supported by the National Research and Development Program for Cancer Control, Ministry of Health and Welfare (HA17C0054) and the Hallym University Research Fund, which had no role in the design of the study, the collection, analysis, or interpretation of the data, or the writing of the manuscript.