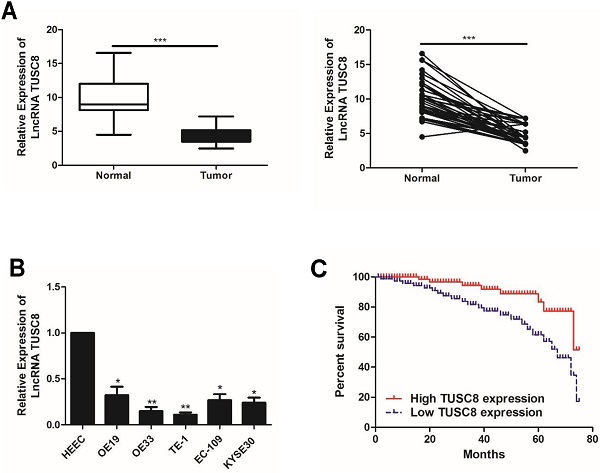 Objective: This study aims to determine the expression pattern of long non-coding RNA (lncRNA) TUSC8 in esophageal cancer tissues and cell lines, to investigate its effects on esophageal cancer cell proliferation and migration, and to explore the mechanism of TUSC8-mediated esophageal cancer suppression via VEGFA downregulation.

Esophageal cancer is a prevalent malignant tumor [1, 2]. In recent years, it is found that esophageal cancer is not caused by a single factor, but involves multiple factors, including poor dietary habits, carcinogens, diseases and genetics [1-3]. Excessive mould consumption, genetic predisposition, tobacco and alcohol addiction, and high intake of nitrosamines are risk factors that increase the susceptibility to esophageal cancer [4, 5]. At present, men are more affected by esophageal cancer than women, with the ratio of 2-4: 1. Although esophageal cancer mainly affects people over 40 years, its incidence in the population younger than 40 years has increased [6, 7]. With the continuous development of epidemiological research, the understanding of esophageal cancer has been gradually deepening. Nevertheless, its pathogenesis remains largely unclear [3, 8]. It is increasingly important to find effective biomarkers for early diagnosis, treatment and prognosis prediction for esophageal cancer [9, 10].

Long non-coding RNAs (lncRNAs) are a group of noncoding RNAs in mammals that contain more than 200 nt in length [11, 12]. LncRNAs play important roles in epigenetic, transcriptional, post-transcriptional and protein translation regulations [13, 14]. Abnormally expressed lncRNAs have been identified as oncogenes or tumor suppressors, which are involved in various tumor cell behaviors [15, 16]. Previous studies have shown that lncRNA TUSC8 is abundant in many types of cancers and participates in tumor progression [17, 18]. However, its biological function in esophageal cancer remains unclear.

In this study, TUSC8 levels in esophageal cancer tissues and cell lines were detected. Subsequently, the in vitro influence of TUSC8 on esophageal cancer progression and the underlying mechanism were explored. Our findings provide novel ideas for clarifying the molecular mechanism of esophageal cancer, thus contributing to develop effective biomarkers for clinical screening and early diagnosis.

Fresh cancer tissues and adjacent tissues were collected from 41 esophageal squamous cell carcinoma (ESCC) patients undergoing radical surgery, and placed in RNase-free EP tubes at -80 °C. Inclusion criteria were: ≥18 years old and pathologically confirmed as ESCC. The exclusion criterion is patient presented with other cancer types. This experiment was approved by the Medical Research Ethics Committee of Xinhua Hospital Affiliated to Shanghai Jiaotong University School of Medicine, and patients signed informed consent. Pathological classification and staging of ESCC were determined based on the criteria proposed by the Union for International Cancer Control (UICC). This study complied with the Helsinki Declaration.

300 cells were implanted in each well of a 6-well plate and cultured for 10 days. Visible colonies were fixed in methanol for 10-15 days and stained using crystal violet. They were captured for counting.

Transwell chambers (Corning, NY, USA) were inserted in the 24-well plate, where 200 μL of suspension containing 1×105 cells and 600 μL of RPMI 1640 with 20% FBS were respectively applied on the top and bottom. After 16 or 20 h cell culture, penetrating cells on the bottom were fixed using 4% paraformaldehyde solution for 20 min, air dried and dyed using crystal violet. Ten minutes later, cells were washed and captured for calculating migratory cells in 5 fields per sample.

A sequence containing 300 base pairs upstream and downstream of the 3ʹ- untranslated region (3ʹ-UTR) conservative binding site of TUSC8 and the target gene VEGFA was synthesized, and amplified, respectively. PCR products were purified after amplification. The amplified sequence was double digested with pcDNA3.1 (+) - luciferase vector for acquiring TUSC8 luciferase vectors, which were co-transfected into cells with NC or pcDNA-VEGFA. Luciferase activity (Promega, Madison, WI, USA) was measured based on the standard procedures.

The expression pattern of TUSC8 in esophageal cancer 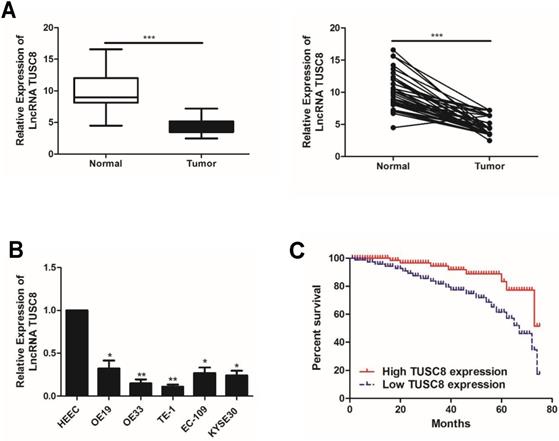 VEGFA is a target gene of TUSC8

Rescue experiments were conducted to elucidate the involvement of VEGFA in esophageal cancer progression regulated by TUSC8. Transfection efficacy of si- VEGFA and pcDNA-VEGFA was examined in OE19 and TE-1 cells intervened with TUSC8 level, respectively (Figure 4A). Silencing of VEGFA reversed the enhanced effects of TUSC8 knockdown on the viability and migration in OE19 cells. On the contrary, overexpression of VEGFA restored the proliferative and migratory abilities inhibited by TUSC8 overexpression in TE-1 cells (Figure 4B, 4C).

Esophageal cancer is a highly heterogeneous malignant tumor with high morbidity and mortality worldwide [1-3]. Due to the differences in geographical location and ethnicity, histological subtypes of esophageal cancer are diverse. In China, ESCC is the main subtype of esophageal cancer, which is highly prevalent in Hebei, Shanxi, and Henan province [4-6]. The occurrence of ESCC is a multifactorial process [1, 2]. The low detective rate of early stage ESCC and its poor prognosis should be well concerned [2, 3, 6, 7]. It is urgent to seek for esophageal cancer biomarkers for clinical application [9, 10].

The activation of oncogenes and loss of function of tumor suppressors are responsible for carcinogenesis [19, 20]. LncRNAs are closely involved in tumor progression as vital regulators [11, 12]. Notably, the tissue and time-specificity of lncRNAs are much more pronounced than those of mRNAs [13, 14]. LncRNAs have been discovered to be closely linked to tumor progression, metastasis, recurrence and prognosis. A previous study has shown that lncRNA H19 is upregulated in esophageal cancer, which induces cell cycle blockage in G1 phase and stimulates proliferative ability by regulating miR-675-5p, serving as a prognostic indicator [21]. LncRNA MALAT1 is highly abundant in esophageal cancer tissues, and positively correlated to clinical stage, tumor size and lymphatic metastasis incidence. Knockdown of MALAT1 weakens the proliferative and metastatic ability in esophageal cancer cells, and induces cell apoptosis by blocking cell cycle progression in G2/M phase via phosphorylating the ATM-CHK2 signaling [22]. TUSC8 is a newly discovered lncRNA and exerts its anti-carcinogenic role by targeting downstream genes, such as MYLIP and PTEN [17, 18]. Thus, decreased TUSC8 expression creates a favorable microenvironment for tumor cell growth. Consistently, our findings uncovered downregulated TUSC8 expression in esophageal cancer tissues and cell lines. By intervening TUSC8 level in OE19 and TE-1 cells, our data revealed that TUSC8 attenuated the proliferation and migration in esophageal cancer cells, indicating that TUSC8 acts as a tumor suppressor in esophageal cancer. 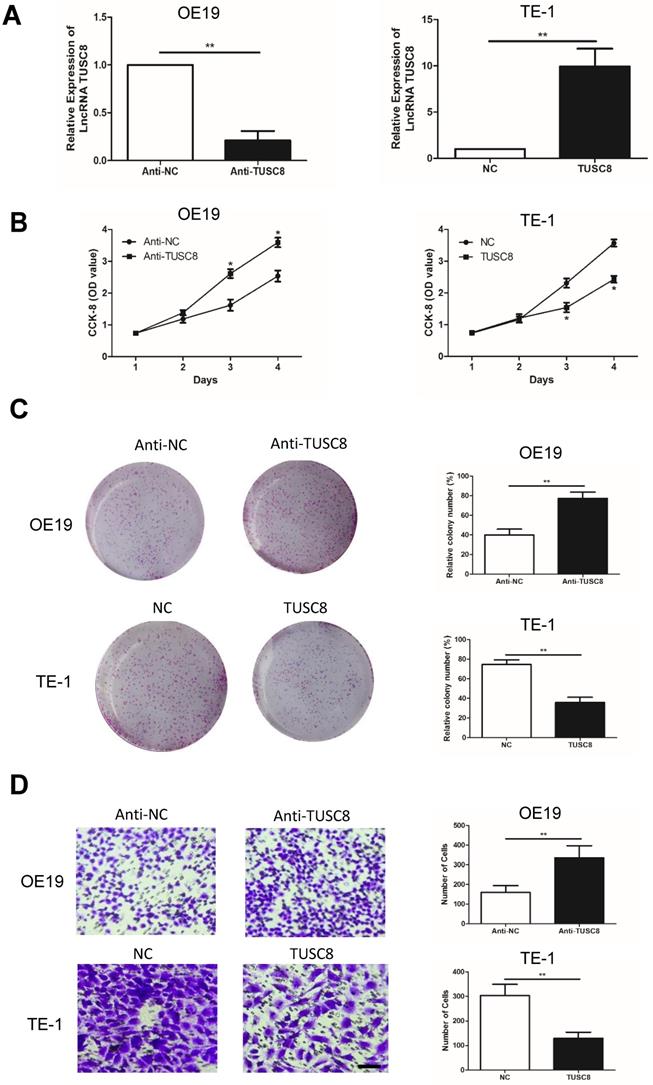 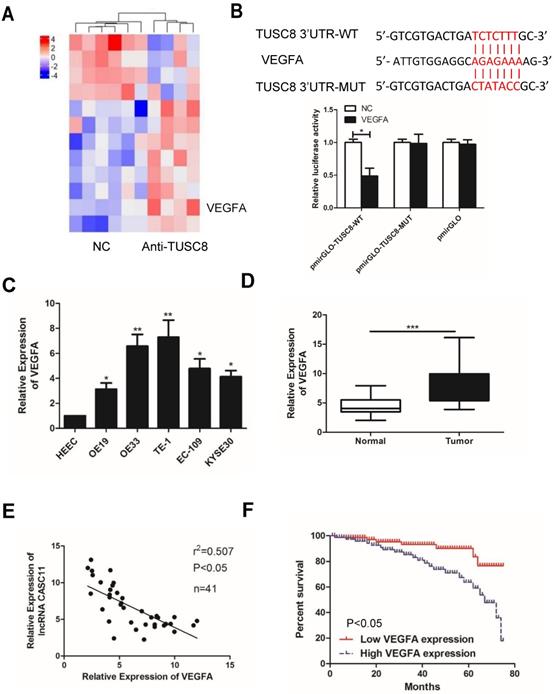 To explore how TUSC8 inhibits the malignant progression of esophageal cancer, high-throughput sequencing of transcriptome was conducted. The result showed that the expression level of VEGFA was pronouncedly changed after knockdown of TUSC8. VEGFA is a cytokine that regulates vascular development and new blood vessel formation [23]. VEGFA has been reported to be expressed in many cancers and its high expression is associated with poor prognosis [24]. VEGFA is suggested to be a key regulator in tumorigenesis and cancer progression [25]. In the present study, the binding relationship between TUSC8 and VEGFA was further confirmed, and they displayed a negative correlation in esophageal cancer tissues. Importantly, VEGFA was able to reverse the regulatory effects of TUSC8 on esophageal cancer cell behaviors. Our findings reveal a co-regulation of TUSC8 and VEGFA in esophageal cancer progression, and are conductive to clinical diagnosis and treatment of esophageal cancer. 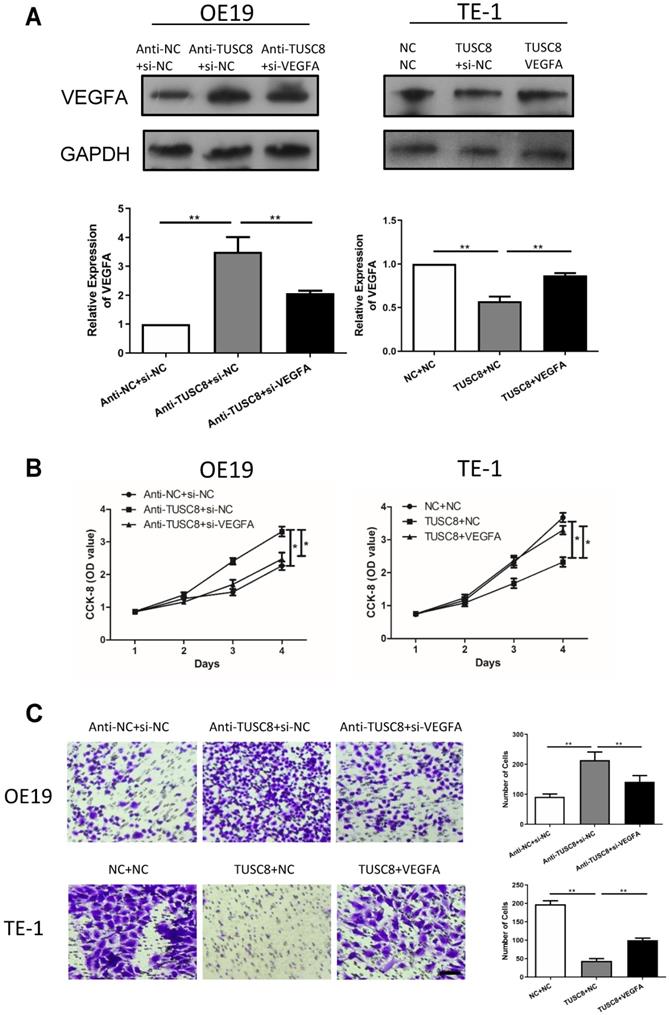 This study was supported by the Interdisciplinary Program of Shanghai Jiao Tong University (project number ZH2018QNB28).