The lncRNA HOXA-AS3 has been reported as a potential oncogene in tumors. Nevertheless, the molecular mechanism of HOXA-AS3 in pancreatic cancer (PC) progression remains unknown. We performed quantitative real-time (qRT) PCR assay to detect the expression levels of HOXA-AS3, miR-29c in PC specimens. Then, we transfected sgRNA-HOXA-AS3, miR-29c mimics, miR-29c inhibitors, or vector-CDK6 plasmids into PC cell lines to regulate the expression levels of HOXA-AS3, miR-29c or CDK6. Luciferase reporter assay was performed to identify the correlations among miR-29c, HOXA-AS3 and 3' UTR of CDK6.The ability of cell proliferation was assessed by cell counting and subcutaneous tumor growth assay. HOXA-AS3 level was upregulated in PC, and its knockdown suppressed PC cells proliferation, whereas miR-29c antagonized the regulatory effect of HOXA-AS3 knockdown by directly binding to HOXA-AS3.Moreover, CDK6 was a target of miR-29c and miR-29c exerted anti-proliferation effects through inhibiting CDK6. HOXA-AS3 could accelerate the growth of PC cells partially by regulating the miR-29c/CDK6 axis, which could be used as a potential therapeutic target in CRISPR-mediated PC treatment.

Pancreatic cancer (PC) is one of the most lethal malignant tumors, causing 432,242 new deaths in 2018 [1]. The treatment advances in the last decades did not improve the poor prognosis of PC and the 5-year survival rate of patients with PC was still less than 8% [2]. The progress of treatments for PC is retarded due to the high invasiveness and strong resistance to chemotherapy [3].Therefore, it is important to identify novel regulation mechanisms in pathogenesis of PC. Traditionally, the researchers mainly focused on the genes that encode proteins. However, these genes only accounted for a small percentage (1-2%) of the whole human genome and the majority of the genome encoded large numbers of regulatory noncoding RNAs [4].

Long noncoding RNAs (lncRNAs) was defined as a class of transcripts without protein-coding potential [4]. LncRNAs participated in large range of cellular processes, including proliferation, differentiation and pluripotency maintenance though chromatin remodeling and epigenetic modification [4]. Furthermore, lots of studies showed that several lncRNAs were involved in pancreatic cancer development and progression [5]. Previous chips results reported that the expressions of lncRNA uc.345 were elevated in PC tissues compared to the matched normal tissues [6]. Upregulation of lncRNA HOXA-AS3 could promote the proliferations of many tumors, such as lung cancer and glioma [7,8]. Mechanistically, lncRNA HOXA-AS3 could sponge miRNA to inhibit mRNA degrading or interact with proteins directly [7,9]. However, the relationship between lncRNA HOXA-AS3 and PC and its underlying mechanism were still unclear.

In this study, we first verified the expression changes of HOXA-AS3 in PC tissues, while elevated expression of HOXA-AS3 might be associated with a worse prognosis. Next, downregulation of HOXA-AS3 in PC cell lines impaired the proliferations. Finally, we found that HOXA-AS3 might regulate the miR-29c/CDK6 axis by sponging miR-29c. In sum, our findings indicated the molecular mechanisms of how lncRNA HOXA-AS3/miR-29c/CDK6 axis controlled PC proliferation.

This study was approved by The Review Board of First Affiliated Hospital of University of South China and conducted in accordance with the principles expressed in the Declaration of Helsinki. Tissues from 63 patients with PC who underwent surgical resection were collected from January 2013 to January 2018 and the informed consents were obtained. None of the patients had received radiotherapy or chemotherapy before surgery.

The sequences of sgRNA were 5'-GCACCCAAATGTCATATAGC -3' (sgHOXA-AS3) and 5'-GTTCTCCGAACGTGTCACGT-3' (sgNC) [9]. The sequences of HOXA-AS3 and 3'UTR of CDK6 were cloned from genomic DNA and inserted to a luciferase reporter plasmid. Site mutagenesis technology was used to construct the mutant plasmids. A primary antibody against CDK6 (Cell Signaling Technology) and anti-β-actin (Cell Signaling Technology) and a secondary antibody (anti-rabbit IgG, Santa Cruz Biotechnology) were purchased.

Total RNA was isolated from cells was and then reversely transcribed to synthesize cDNA template. Next, qRT-PCR was performed by using cDNA template and specific PCR primers.The PCR primers were as follows:

The details of western blotting were followed by previous references [10]. It was carried out using whole cell protein lysates which were separated according to molecular mass on SDS PAGE (10%) and immunoblotted with a primary antibody against CDK6 and a secondary antibody (all from Santa Cruz). Equal protein specimen loading was monitored using an anti-β-actin antibody.

The details of cell growth counting and clone formation assays were followed by previous references [10].

All experimental animal procedures were approved by the Medicine Committee for the Use and Care of Animals of Southern China University. A total of 2×106 Panc-1 cells were injected to the left scapular region of nude mice (male, 6-week old, purchased from Slaccas Laboratory Animal) and. tumor volumes were monitored every two days.

Data are shown as the mean ± one standard deviation (SD) and analyzed by a t- test. The Kaplan-Meier analysis and log-rank test were used to calculate the postoperative survival time. A P < 0.05 was considered statistically significant. All the processes of statistical analysis were performed using IBM SPSS Statistics Version 20 software.

A total of 63 specimens from PC patients were collected and the total RNAs of tumor and the adjacent tumor tissues were extracted for further investigations. We found that expressions of HOXA-AS3 were elevated in PC tissues compared to the matched adjacent normal tissues (P<0.05) (Figure 1A). The correlations between expressions of HOXA-AS3 and several clinicopathological parameters were calculated by Fisher's exact test and the results showed that a higher expression of HOXA-AS3 correlated with the higher TNM stage (P = 0.03) and positive lymph node metastasis (P = 0.03) (Table 1). Combined with postoperative fellow-up data, we found that patients with relatively low HOXA-AS3 expression had a better prognosis compared to those with high HOXA-AS3 expression (P<0.05) (Figure 1B).

Correlation analysis of the clinicopathological parameters with the level of LncRNA-HOXA-AS3 expression in 63 patients with PC (P value: Chi-squared test; N.S: P>0.05) 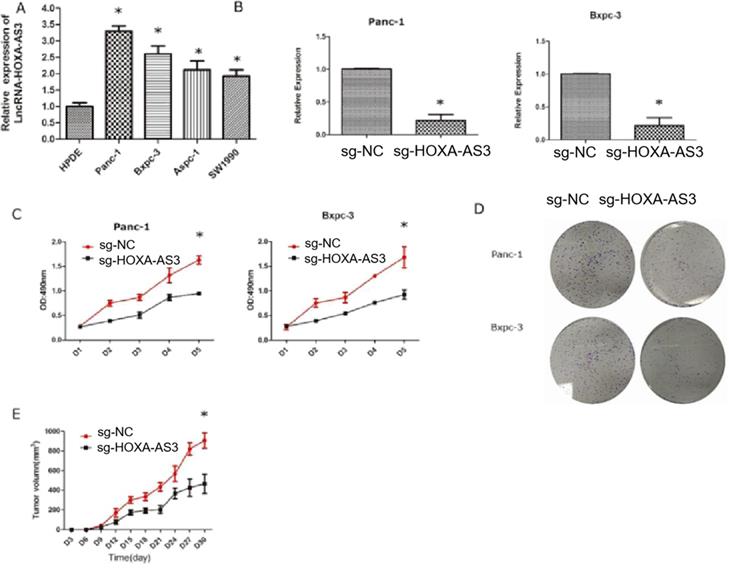 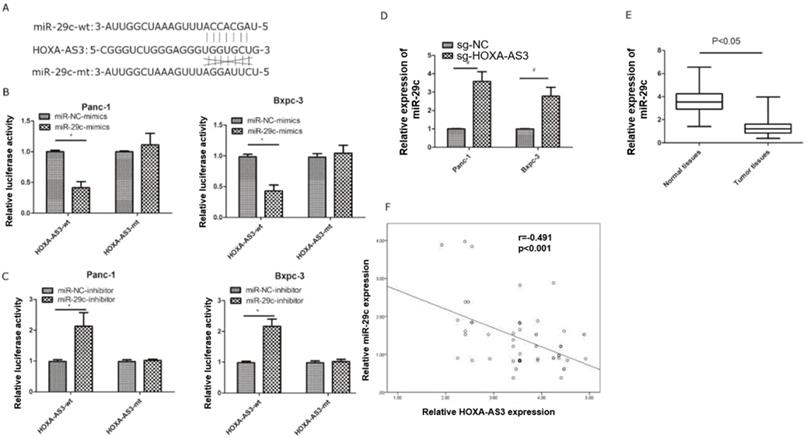 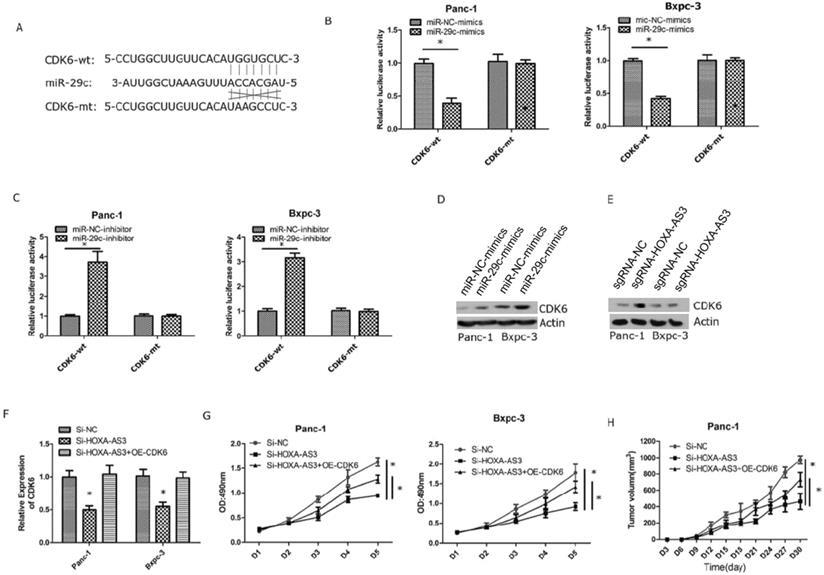 The competing endogenous RNA (ceRNA) theory hypothesizes that a series of lncRNAs can function as molecular sponges of miRNAs to regulate target mRNAs expression and are involved in many tumorigenic and developmental processes [11]. Knockdown of lncRNA often uses siRNA-mediated RNA interference technology. CRISPR has more advantages than RNAi, because siRNA is mainly processed in the cytoplasm, which is beneficial for targeting mRNA. In contrast, CRISPR plays a role in DNA transcription, can directly reduce the expression level of lncRNA, and has less off-target and cytotoxicity.

Emergent evidences indicated that miR-29c was involved in PC cell growth, invasion and migration by targeting ITGB1 [12]. MiR-29c could also promote the chemosensitivity of PC cells by targeting USP22-mediated autophagy [13]. Moreover, the relationship between lncRNAs and miR-29c was also analyzed and lncRNA TUG1 could affect cell proliferation, invasion and migration via sponging miR-29c in PC [14]. CDK6 was a cyclin-dependent serine-threonine kinase and played a key role in reacting to mitogenic or pro-proliferative signals [15]. CDK6 induced cell-cycle arrest and senescence in many tumors and could be used as a potential therapeutic target in molecular treatment [16,17]. MiR-29c could inhibit the expression of CDK6 in bladder cancer [18]. Consistent with these reports, we verified that miR-29c was downregulated in PC tissues and could regulate the expression of CDK6 in PC cell lines.

Our study also had several limitations. Firstly, the effects of lncRNA HOXA-AS3/miR-29c axis and miR-29c/CDK6 axis had been validated in previous study and we just connected these three molecules to build a new axis. However, no new molecules were identified from our study. Secondly, the relationship between lncRNA HOXA-AS3 and tumor invasion and migration had not been studied in our study. Finally, miR-29c/CDK6 axis was one of the downstream pathways of lncRNA-HOXA-AS3 and more downstream pathways needed to be found in the future.

In conclusion, HOXA-AS3 could promote the proliferation of PC cells partially by regulating miR-29c/CDK6 axis and this new molecule could be used as a potential therapeutic target for PC treatment. CRISPR may provide an alternative approach to treat cancer by targeting HOXA-AS3.

This study was approved by The Review Board of First Affiliated Hospital of University of South China and conducted in accordance with the principles expressed in the Declaration of Helsinki.