Background: Dysregulation of microRNAs (miRNAs) is associated with the pathogenesis of non-small cell lung cancer (NSCLC). However, the mechanisms through which miR-182-5p regulate NSCLC progression have not been established. This study aimed at evaluating the expression levels of miR-182-5p in human NSCLC and its function in lung cancer cells. Endothelial PAS Domain-containing protein 1 (EPAS1; also referred to as hypoxia-inducing factor 2A, HIF-2α) is a transcription factor that is responsible for induction of genes related to cell survival under hypoxia conditions. Hypoxia, an inherent feature of solid tumors, is associated with aggressive phenotypes, as well as resistance to radiotherapy and chemotherapy, which predict metastasis and poor prognosis.

Methods: The Cancer Genome Atlas (TCGA) dataset was used to investigate the association between miR-182-5p expression and clinicopathological characteristics as well as prognosis of NSCLC patients. Target genes of miR-182-5p were identified using the PITA, miRmap, microT, miRanda, PicTar, and TargetScan prediction tools. Transwell assays were performed to determine the potential functions of miR-182-5p in lung cancer cells. Luciferase reporter assays were performed to analyze regulation of the putative target of miR-182-5p while western blot assays were used to validate the luciferase results.

Results: miR-182-5p was found to be upregulated in NSCLC tissues and acted as an independent prognostic factor for tumor recurrence in NSCLC patients. Functionally, overexpression of miR-182-5p promoted lung cancer cell migration and invasion. Genome-wide gene expression analysis and luciferase report assays revealed that EPAS1 is a direct target of miR-182-5p. EPAS1 was negatively correlated with miR-182-5p expression in NSCLC tissues. Univariate and multivariate survival analyses identified EPAS1 as an independent prognostic factor for overall survival (OS) in NSCLC.

Conclusions: These findings imply that miR-182-5p promotes NSCLC progression by targeting EPAS1 and is, therefore, a potential indicator of tumor recurrence in NSCLC patients.

Globally, lung cancer is the leading cause of cancer-related mortalities [1]. In 2018, China recorded an estimated 4.3 million new cancer cases and 2.9 million cancer-related mortalities [2]. Over 80% of lung cancer incidences are NSCLC [3,4]. High frequencies of recurrence and metastasis are highly associated with poor clinical outcomes of lung cancer patients. It has been postulated that miRNA deregulation is correlated with NSCLC progression [5]. MiRNAs inhibit target mRNA based on total or partial complementarity by targeting the 3' untranslated region (UTR) of the mRNA [6]. miR-182-5p, a member of the miR-183/96/182 cluster, is related to various cancers [7]. Depending on cancer type, it can function as an oncogene or a tumor suppressor [8]. Suppressed expression levels of miR-182-5p are associated with poor survival outcomes in neuroblastoma [9]. However, miR-182-5p is involved in hepatocellular carcinoma (HCC) metastasis by targeting FOXO3a [10]. While its overexpression promotes NSCLC metastasis by activating the NF-κB signaling pathway [11, 12]. Moreover, upregulated miR-182-5p levels enhance drug resistance in cisplatin-treated A549 by regulating PDCD4 [13].

EPAS1 is a homolog of hypoxia-inducible factor 1α. It plays essential roles in cell survival and invasion through E-cadherin, Vimentin, Ki-67, CD31 [14], and VEGFA [15] [16]. It has been associated with several human cancers [17]. Studies have reported that EPAS1 is the primary target gene of miR-182-5p [18]. However, its underlying mechanisms have not been established [18].

The microRNA-Seq data (513 cases) and the mRNA data (504 cases) and clinical information from The Cancer Genome Atlas (TCGA) database (https://genome-cancer.ucsc.edu; Apache-2.0 licence) were confirmed and downloaded as the study subjects. We enrolled patients with pathologically confirmed stage I-IV NSCLC. The cases were collected from several cancer centers in the United States according to strict standards, and the clinical information of patients was recorded and followed up in detail. Basic clinical information in the database included age, gender, pathological type, TNM stage (Table S1 & 2). GSE36681 (Normal 103 and Tumor 103) was downloaded from the Gene Expression Omnibus database (GEO, https://www.ncbi.nlm.nih.gov/geo/). GEO2R was used to determine the gene expression profiles of lung adenocarcinoma (LUAD) and normal control (NC) samples and identify genes that were differentially expressed. Target genes of miR-182-5p were identified using the PITA [19], miRmap [20], DIANA-microT [21], miRanda [22], PicTar [23], and TargetScan [24] prediction tools. Analysis of differentially expressed genes in NSCLC was performed using Gene Expression Profiling Interactive Analysis 2 (GEPIA2) [25]. Correlation analysis between miR-182-5p and target genes was performed using ENCORI [26]. Disease-free survival (DFS) was defined as the time between surgery and the first event of either disease recurrence or death from any cause. OS was defined as the time between the date of diagnosis and death from any cause.

Transfected cells (2×104) in 200 µl serum free medium were added to the upper compartment of chambers (Corning, NY, USA) which were pre-coated with Matrigel (Corning, NY, USA). Chambers were placed in 24-well plates with 0.5 ml of 15% FBS medium. After 24 h of incubation at 37 °C, chambers were obtained, the medium was discarded after which they were washed using PBS (5 times, each for 5 min). Immediately, chambers were fixed in 24-well plates containing 300 μl of 4% PFA for 30 min. Then, they were washed 3 times using PBS and stained with 300 μl crystal violet (0.1%) for another 90 min. Cells in the wells were washed using the PBS buffer. Then, cells in the upper compartment were wiped away while cells in the lower compartment were observed by light microscopy. The number of five high power fields per chamber were counted and mean value calculated. The migration assay was similarly performed as the invasion assay, except that no Matrigel was used.

Sequences of the miR-182-5p mimic, inhibitor, and NC

The 293T cells were cultured in 24-well plates and randomly allocated into four groups for transfection studies using the Lip3000 transfection kit (Thermo Fisher Scientific, USA). Plasmid sequences used in this study are shown in the following information (Table 3). For each group, co-transfection was performed using a control plasmid (40 ng), a recombinant plasmid (800 ng), and a final mimics concentration of 20 nmol/L. Each group was set with 5 multiple pores. Cells were lysed, after which positive transfection was detected using the double luciferase assay kit (Biology of Hanheng, China) after 48 h of transfection. After measuring using a chemiluminescence instrument, the blank hole's basal signal was subtracted from the data of each hole. The firefly fluorescence signal generated by the plasmid was used as the control. Relative fluorescence activities were divided by sea kidney's fluorescence signal and normalized for each group.

Univariate Cox regression analysis was performed to identify primary prognostic factors while multivariate Cox regression analysis and construction of the K-M survival curve were performed to establish the risk score model, and identify independent prognostic factors. Receiver operating characteristic curve (ROC curve) analysis was performed to estimate the prognostic power of the risk score model. Results of the receiver operating characteristic curve (ROC) in IBM SPSS Statistics version 24.0 (SPSS Inc., Chicago, IL, USA) were used to determine the diagnostic critical value and obtain the AUC (Area under the curve). The Youden Index was calculated as: Youden index= sensitivity + specificity -1. The maximum value of the Youden index is the optimal miR-182-5p and EPAS1 bound value. Cut-off values under the ROC curve were grouped to determine the relationship between their expression levels and lung cancer prognosis. The GraphPad Prism version 7.0 (GraphPad Software, USA) was used to analyze data regarding the function of miR-182-5p, which were presented as means ± standard deviation (SD). Differences between groups were determined using the GraphPad Prism software. p≤ 0.05 was set as the threshold for statistical significance.

miR-182-5p expression was associated with tumor recurrence in NSCLC 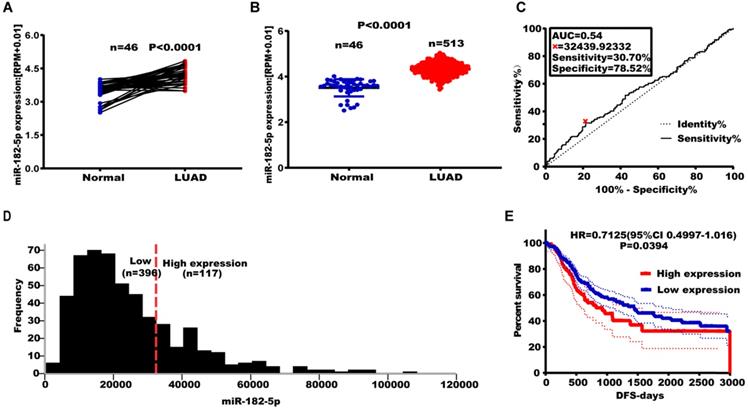 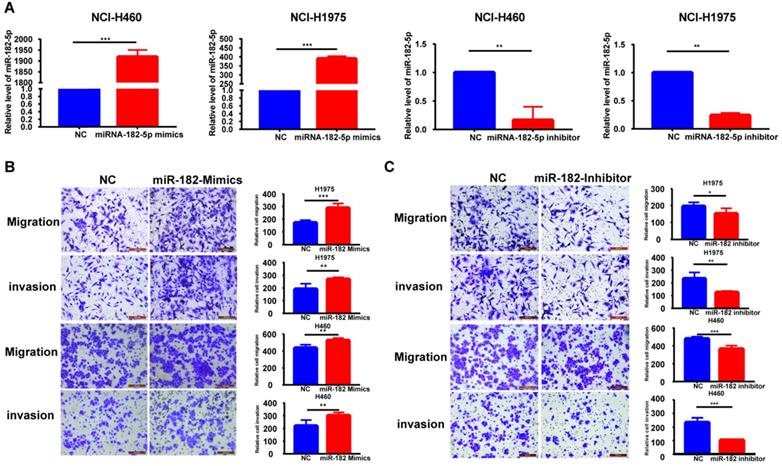 Six different miRNA target prediction databases were used to select 121 common target genes to establish the molecular mechanisms involved in regulation of lung cancer cell migration and invasion by miR-182-5p (Table S3). Differentially expressed genes in lung adenocarcinoma were obtained from the TCGA project through GEPIA2 database analysis [25]. There were 26 differentially expressed genes that were found to be regulated by miR-182-5p. Expression levels of EPAS1 in the gene list were significantly lower than those of adjacent tissues (Figure 3A). EPAS1 was negatively correlated with miR-182-5p expression in NSCLC tissues (r = -0.146, p = 0.000934; Figure 3B). Then, the Luciferase reporter assay revealed that wild type (WT) or mutant (Mut) 3'UTR of EPAS1 were successfully co-transfected with miR-182-5p mimics into the 293T cell line (Figure 3C). These findings imply that, compared to the miR-NC group, luciferase activity of the WT 3'UTR of EPAS1 was enhanced by increasing the expression of miR-182-5p. However, that of Mut 3'UTR of EPAS1 was unaffected by miR-182-5p's overexpression (Figure 3D). These findings confirm that EPAS1 is the target gene of miR-182-5p. 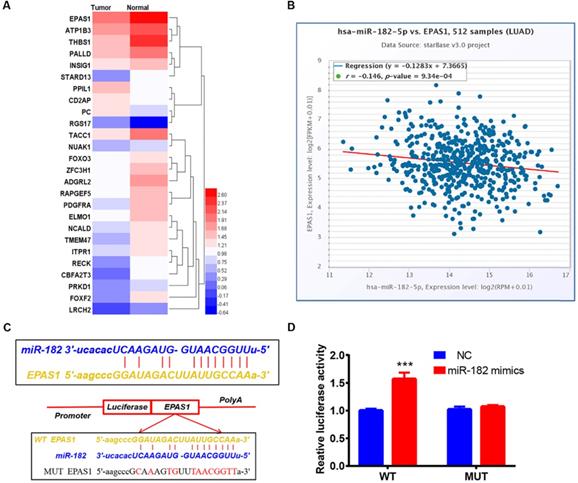 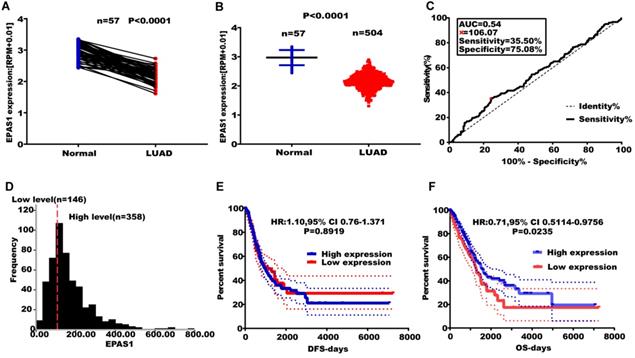 EPAS1 expression is associated with poor survival in NSCLC 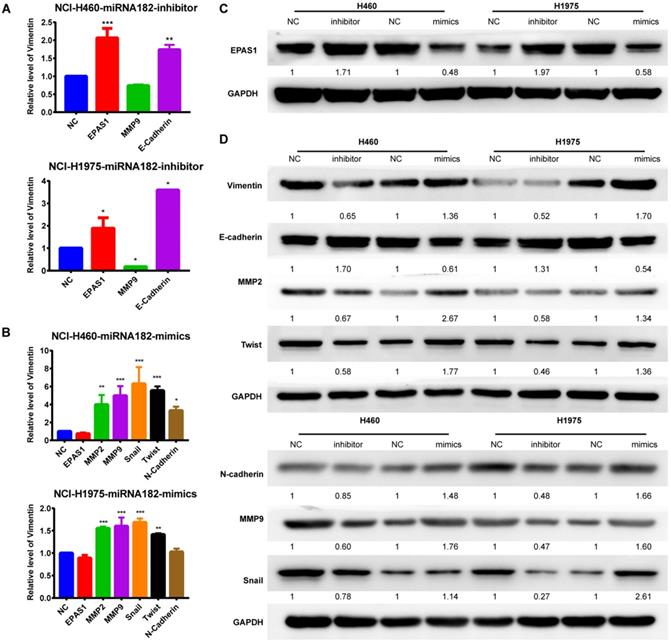 Abnormal miRNA expression levels in early stages of lung cancer have been correlated with prognosis [28]. Besides, miRNAs have a high pooled sensitivity and specificity in lung cancer diagnosis and treatment [29].

miR-182-5p is a small non-coding RNA that regulates gene expression by directly binding the 3'-UTR of the target mRNA. It regulates multiple biological processes by regulating over 1000 target genes involved in cell cycle, proliferation, apoptosis, metastasis, and metabolism [30-32]. Moreover, it has been shown to promote the occurrence and development of breast cancer [33], lung cancer [34], thyroid cancer [35], medulloblastoma [36], and glioma [37], thereby leading to poor prognosis. It is usually highly expressed in lung cancer and tuberculosis patients [38]. Some studies postulate that serum miR-182-5p is highly sensitive and specific as a potential biomarker for early lung cancer detection [28]. Moreover, miR-182-5p has been shown to play a dual role in lung cancer development: as an oncogene in early stages of lung cancer and as an inhibitor of lung cancer metastasis in advanced lung cancer stages [34]. miR-182-5p inhibits invasion and metastasis by regulating the EMT process through targeted down or up-regulation of ZEB2 (Zinc Finger E-Box Binding Homeobox 2), E-cadherin, and Vimentin proteins in NSCLC [39]. Overexpression of miR-182-3p may inhibit EMT and metastasis by inactivating the Met/AKT/Snail pathway in NSCLC cells [40]. Therefore, studies should aim at elucidating on the expression and function of miR-182 in lung cancer metastasis.

In this study, miR-182-5p expression was associated with age, pathological stage, and tumor size and is, therefore, a potential independent prognostic factor for tumor recurrence and metastasis in NSCLC patients. In addition, overexpression of miR-182-5p promoted lung cancer cell invasion and metastasis in vitro. Besides, miR-182-5p upregulated the expression of Twist, MMP-2 (matrix metallopeptidase 2), MMP-9 (matrix metallopeptidase 9), N-cadherin, Vimentin, and Snail proteins, which promoted the EMT process in lung cancer. Downstream target genes of miR-182-5p, predicted using an online platform, revealed that EPAS1, a potential target gene for miR-182-5p, affects cell invasion and migration. This finding was confirmed using the luciferase report assay.