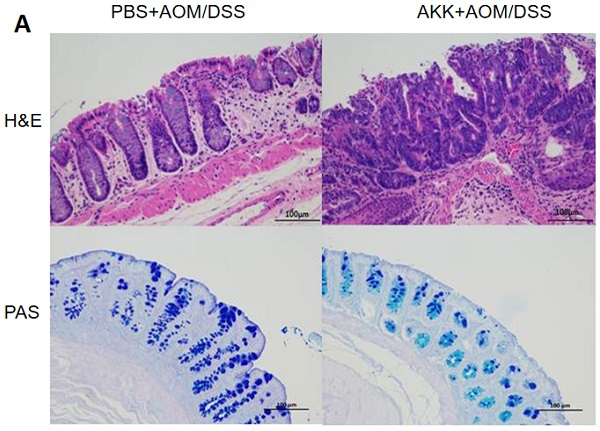 Colorectal cancer (CRC) is one of the most common digestive tract malignancies and a major cause of cancer-related morbidity and mortality, which has done great harm to people's health around the world [1]. Despite its severity, the pathogenesis of CRC is still unclear, and the current treatment has not been quite satisfying. Therefore, the studies on the molecular mechanism of CRC development that can provide new ideas and therapeutic targets for its diagnosis and treatment are in urgent need. The cause of CRC is complicated and involves genetic factors, diet, and inflammation. Among them, inflammation is a well-known risk factor. Clinically, patients with inflammatory bowel diseases (IBD) had an increased risk of developing CRC, which was also supported by the studies on CRC pathogenesis utilizing IBD mouse model [2, 3].

Absent in melanoma 2 (AIM-2) is a pattern recognition receptor that can recognize dsDNA. In our previous study and other studies, it was found that AIM2 could suppress colitis-associated colorectal cancer (CAC) induced by azoxymethane (AOM) and dextran sodium sulfate (DSS) treatment. The underlying mechanism can be divided into two parts: on the one hand, AIM2 suppressed overt proliferation by controlling the proliferation of intestinal epithelial cells as well as the expansion of intestinal stem cells [4-6]. On the other hand, AIM2 suppressed colorectal tumorigenesis by modulating the gut microbiota [6]. The genomic sequencing of mouse microbiota showed that Aim2-/- mice harbored increased levels of Akkermansia muciniphila, Anaeroplasma, and decreased levels of Anaerostipes, Bifidobacterium, Flexispira, Prevotella and Paraprevotella species relative to WT mice. More importantly, the susceptibility to CRC could be reduced in Aim2-/- mice by co-housing them with WT mice, indicating that WT mouse might harbor some protective microbiota in their intestine, and there's potential gut microbiota alteration in Aim2-/- mice which led to hyper-susceptibility to CRC [6]. However, it's still unclear how the alteration of gut microbiota affected the proliferation of intestinal stem cells as well as the progression of CRC.

A. muciniphila, a gram-negative anaerobic bacterium from phylum Verrucomicrobia, can be isolated from the human intestine and other animals. It was previously shown that A. muciniphila can produce acetate and propionate during its growth on mucin [7, 8]. A. muciniphila engraftment in the mucosal layer of intestinal mucosa triggers the host's metabolic and immune responses. The number of A. muciniphila is often considered as an indicator in monitoring host's metabolic status due to the bacterium's ability to increase the thickness of intestinal mucosa and to enhance the intestinal barrier function. Other than that, A. muciniphila can produce short-chain fatty acids (SCFAs) that are in favor of the host and other gut microbiota, thus improving intestinal homeostasis [9].

In our study, mice were orally gavaged by A. muciniphila before AOM/DSS treatment to develop CAC, then we evaluated the inflammation status and neoplastic development of those mice. In vitro study, A. muciniphila and human CRC cell line were co-cultured, then we monitored the influence of bacterium on cell proliferation. This study will contribute to our understanding on host interaction with specific intestinal bacteria and provide new ideas and theoretical basis for the prevention and treatment of CRC.

A. muciniphila (ATCC#BAA-835) was grown anaerobically in brain heart infusion broth overnight and then sub-cultured. The bacterial solution was collected, and then diluted to a concentration of 1×108 cells of A. muciniphila per 100 µl medium. The mice were orally administrated with PBS or A. muciniphila at the 0, 3, 5, and 7 days after experiments were initiated, and the feces were collected on day 0 and day 14 to validate the colonization of A. muciniphila.

The CAC animal model was established as previously described [6]. Mice were intraperitoneally injected with AOM (10 mg/kg) and then treated with 3% DSS in drinking water for 5 days at 5 days after AOM injection. The mice were treated with DSS for another two rounds and sacrificed on the 80th day after AOM injection to observe the tumor burden.

Proteins were extracted from colon tissues using RIPA lysis buffer with protease inhibitors. The samples were resolved in SDS-PAGE and transferred onto NC membranes, Membranes were blocked in 5% milk for 1 hour and then incubated with anti- PCNA (CST, #13110, 1:1000 dilution) and anti-β-actin (Proteintech, #66009-1-Ig, 1:1000 dilution) antibodies overnight at 4 °C. After wash, membranes were incubated with Anti-rabbit (BOSTER, #BA1054) or anti-mouse (BOSTER, #BA1050) secondary antibody at room temperature for 1h. Finally, after adding ECL (Thermo, #A38555) substrates, the protein bands were analyzed by Chemdoc (Bio-rad).

This was performed using AB-PAS staining solution kit (Servicebio, Wuhan, China). Specifically, tissues sections were rehydrated, then stained with PAS dye solution C and B for 15 min, respectively. Then sections were then rinsed with running and distilled water. After that, PAS dye solution A was used to stain the sections. Finally, the sections were dehydrated, made transparent in xylene, and mounted with neutral gum. Then the stained goblet cells per crypt were counted under the light microscopes.

MTT kit (Solarbio, #M1020) were utilized. Human colon epithelial cell line SW620 (ATCC, # CCL-227) cells were collected and plated in 96-well plates. At day 1, 2, and 3, cells were incubated with 106 A. muciniphila for 4 hours, then treated with gentamicin (Solarbio, Beijing) to kill extracellular bacteria, and further washed. After that, cells were then incubated with MTT solution for 4h, washed, and incubated with Formazan solution. Finally, OD490 values were measured.

Data were analyzed using Graphpad Prism 7.0 software. Data were expressed as Mean ± SEM. The comparison among multiple groups and between two groups were performed by analysis of variance (ANOVA) and unpaired t-test, respectively. P<0.05 was considered statistically different.

Akkermansia muciniphila administration enhanced the susceptibility of mice to colitis-related colorectal cancer (CAC). C57BL/6 mice were orally administrated with A. muciniphila or PBS and treated with AOM/DSS to induce CRC. Bacterial colonization was validated in the feces collected before and after gavage by quantitative PCR. Mouse body weights were monitored during the AOM/DSS treatment. After 80 days, the mice were sacrificed, and the colons were collected to measure the tumor burden. A. The number of A. muciniphila in the feces of mice before and after gavage; B. body weight change; C. Colon length; D. The number of colon tumors; E. Tumor diameter; F. Representative photos of colon tumors. The data of A-D were represented by the Mean ± SEM, PBS+AOM/DSS, n=5; AKK+AOM/DSS, n=7. *P<0.05, **P<0.01, A, C, D. Unpaired student T test, B.Two-way ANOVA analysis. The experiments were repeated twice independently. 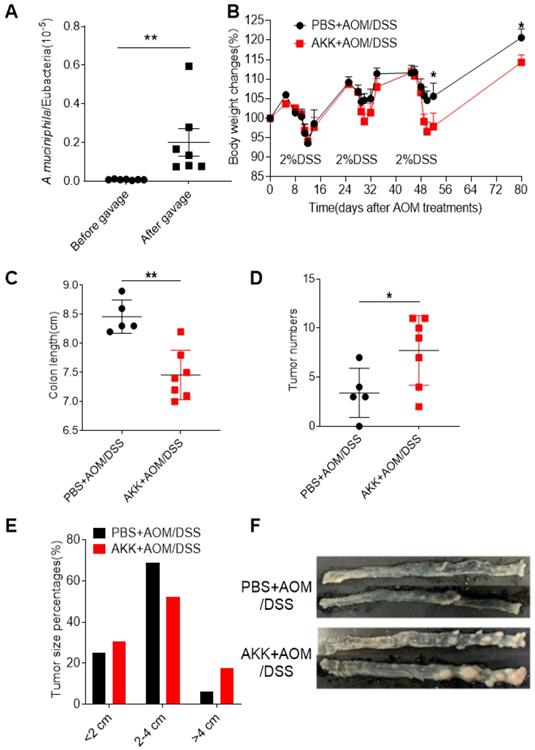 Mouse colon tissue damage and goblet cell staining after A. muciniphila administration. C57BL/6 mice were orally administrated with A. muciniphila or PBS and treated with AOM/DSS to induce CRC. The mice were sacrificed on the 80th day after AOM treatment, and the colons were collected for histochemical staining. A. H&E staining and PAS staining, scale bar: 100µm; B. The average numbers of inflammatory cells in each crypt. C. The average number of goblet cells in each crypt. **P<0.01, B, C. Unpaired student T test. The experiments were repeated twice independently. 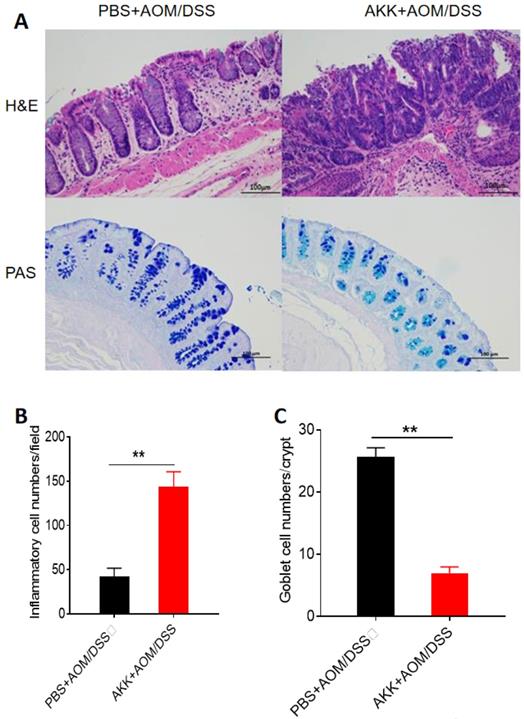 A. muciniphila promoted inflammatory cell infiltration, reduced the number of goblet cells, and promoted the proliferation of intestinal epithelial cells

To further evaluate the tissue damage, we performed H&E staining in the colons at 80 days post AOM treatment. The AKK+AOM/DSS group mice presented more tissue damage and infiltration of inflammatory cells in the colons than PBS+AOM/DSS group mice (Figure 2A, B). A. muciniphila can degrade mucin mainly secreted by goblet cells in the intestine, and we performed staining analysis of goblet cells on colon tissues. The results showed that the goblet cells number in the AKK+AOM/DSS group was significantly reduced in comparison with the controls (Figure 2A, C). 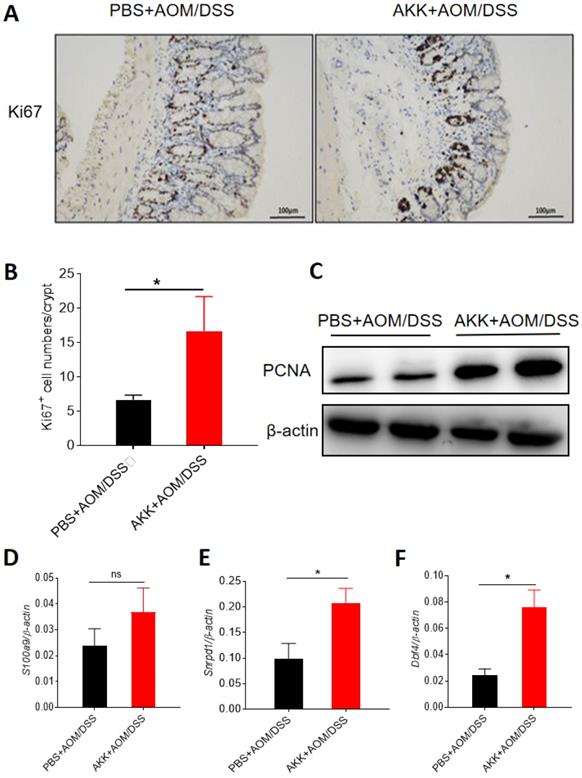 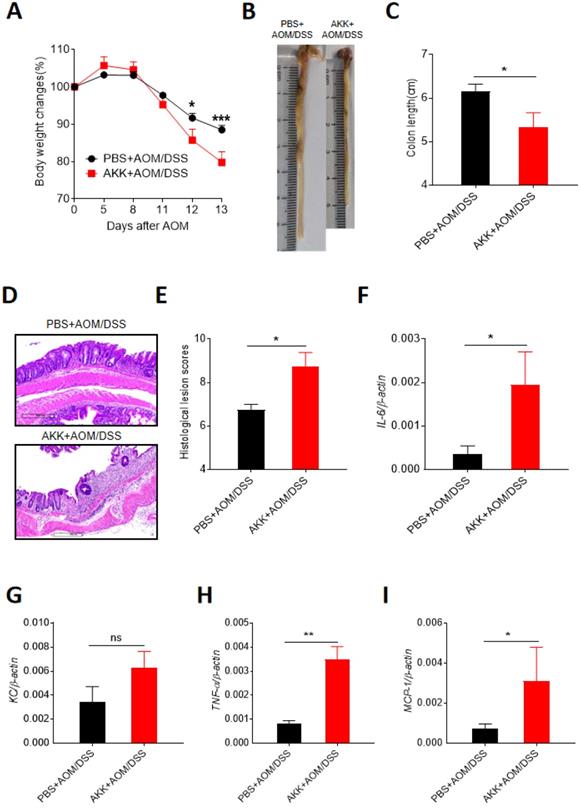 To further study the possible role of A. muciniphila administration in inducing CRC development. We investigated the colonic changes in 14 days post-AOM injection which was right after AOM treatment and the first round of DSS treatment. Compared to PBS+AOM/DSS group, the mice in AKK+AOM/DSS group lost more body weights (Figure 4A), had significantly shorter colon lengths (Figure 4B-C), and higher level of histological lesion (Figure 4D-E), further suggesting that A. muciniphila could increase the host susceptibility to CRC development. Inflammation is an important risk factor in the formation of CRC. We measured the expression levels of multiple classical inflammatory cytokines by RT-qPCR, including Interleukin-6 (IL-6), Tumor necrosis factor alpha (TNF-α), Monocyte chemotactic protein 1 (MCP-1), and Keratinocyte chemoattractant (KC). The results showed that the expression levels of all the inflammatory cytokines except KC were elevated in AKK+AOM/DSS group relative to controls (Figure 4F-I). These results indicated that A. muciniphila could promote the proliferation of intestinal epithelial cells, possibly by aggravating colonic inflammation.

A. muciniphila administration promoted the proliferation of intestinal epithelial cell in vitro

To directly study the possible mechanism of A. muciniphila in promoting the proliferation of intestinal epithelial cells, human colon epithelial cell line SW620 cells were co-cultured with or without A. muciniphila for 4 hours following gentamycin treatment to kill extracellular bacteria for 3 days. Cell proliferation levels were measured by MTT assay on the 0, 1, 2, and 3 days after co-culture. The results showed the cell proliferation rates of the co-culture group was higher than that of the control group at 2 and 3 days after co-culture (Figure 5A). In addition, in this co-culture experiment, cells were collected after gentamicin treatment at 0, 2, 4, 6, and 8 hours respectively. Then RT-qPCR was used to analyze the expression of genes that were associated with cell proliferation. Consistent with the results of MTT assay, the gene expression levels of S100A9, SNRPD1 and DBF4 were elevated in co-culture group than controls (Figure 5B-D). These results suggest that A. muciniphila could promote the proliferation of intestinal epithelial cells in vitro. 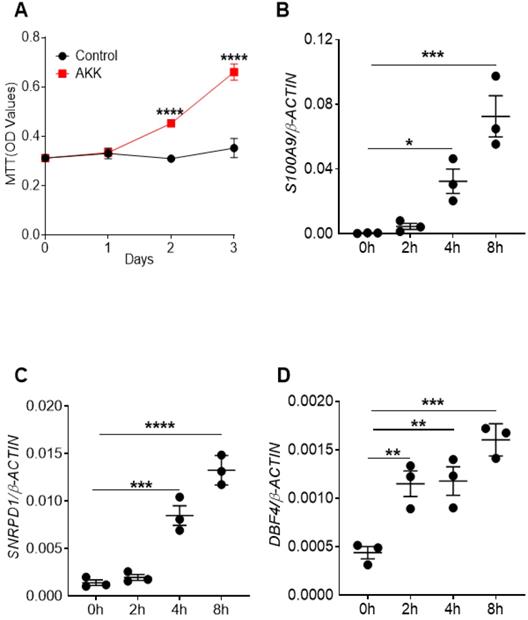 A. muciniphila is a commensal bacterium mainly colonized in the mucus layer of human intestine, which is associated with intestinal barrier function due to its ability to degrade mucin. Previous studies have shown that the number of A. muciniphila in the gut was inversely correlated with diabetes, obesity, and other diseases [27-29]. Yet other studies suggest that A. muciniphila might promote the development of CRC. However, the live A. muciniphila's effect on CRC development has not been directly investigated.

In our study, mice were orally administered with live A. muciniphila or PBS and treated with AOM/DSS to induce CRC. The role of A. muciniphila in CRC development was determined by monitoring tumor burden, inflammation status, and proliferation of intestinal epithelial cells. More body weight loss, shorter colon length and greater tumor burden in mice administrated with A. muciniphila than controls were observed, indicating their hyper-susceptibility to CRC. Furthermore, more severe tissue damage and higher gene expression of inflammatory cytokines in mice receiving A. muciniphila administration were found.

In conclusion, our study suggests that A. muciniphila may promote the development of colitis-associated CRC by aggravating inflammation at the early stage of CRC and enhancing intestinal epithelial cell proliferation. However, further studies were required to dissect the specific mechanism of A. muciniphila affecting CRC progression.