Family with sequence similarity 49, member B (FAM49B) is highly expressed in many tumors, its role in malignant tumors especially in hepatocellular carcinoma (HCC) remains uncertain. We first evaluated the expression, clinical features, and prognostic value of FAM49B using RNA-seq and clinical data from The Cancer Genome Atlas. We further assessed the role of FAM49B in the tumor immune microenvironment. The correlation of FAM49B with the sensitivity of 192 anti-cancer drugs was analyzed using data from Genomics of Drug Sensitivity in Cancer database. qRT-PCR assay was used to validate the expression of FAM49B in HCC. FAM49B was expressed at high levels in most tumor types, including HCC. High FAM49B expression predicted poor survival in patients with HCC. We also found that FAM49B expression was negatively associated with the infiltration levels of immune killer cells, including NK cells, and positively associated with immunosuppressive cells, including Tregs and Central Memory T cell (Tcm), in HCC. In addition, FAM49B expression was positively associated with immune checkpoints, immune regulation genes, MHC genes, chemokines and chemokine receptors. Patients with evaluated expression of FAM49B might be resistant to several anti-cancer drugs. Our results suggest that FAM49B is a potential prognostic biomarker for HCC. FAM49B play a potential key role in regulating tumor immune microenvironment and anti-tumor drug tolerance.

In recent years, significant progress has been made in cancer-related treatment technologies in hepatocellular carcinoma (HCC). However, the survival rate for HCC is still very low [1,2]. Studies have shown that there is a certain relationship between tumor immune microenvironment and tumor progression in HCC [3-5]. The immunosuppressive microenvironment has a poor effect on the prognosis of patients with HCC. Thus, it is urgent for ameliorating the prognosis of HCC patients to detect immunosuppressive status-related prognostic marker and potential drug targets.

Family with sequence similarity 49, member B (FAM49B), localized on chromosome 8q24, encodes for a 37-kDa protein, was previously reported to involve progression of several diseases, including tumor progression [6]. For example, FAM49B was up-regulated and promoted proliferation and metastasis of gallbladder cancer cell [7].

Suppressing the immune checkpoint and immunosuppressive cells, activating T cells and NK cells, provides a new idea for tumor immunotherapy [8]. Interestingly, researches have reported that FAM49B could inhibit T cell activation by inhibiting Rac activity and regulating cytoskeleton reorganization [9]. These reports indicate that FAM49B may play an essential role in tumor progression. However, the role of FAM49B in HCC remains uncertain.

In our study, we comprehensively analyzed the role of FAM49B in HCC and pan-cancer, including the expression, prognostic value, DNA methylation, and copy number alteration (CNA) alteration of FAM49B. The correlation between FAM49B expression and infiltration level of immune cell and immune regulation-related genes were further evaluated. The sensitiveness of anti-cancer drugs was assessed for patients with high FAM49B expression. Our results provide novel insights into the functional role of FAM49B in HCC, highlighting a potential mechanism whereby FAM49B influences the tumor immune microenvironment (TIME), as well as prognosis of tumor patients.

The RNA-seq and clinical data of TCGA, CCLE, and GTEx were downloaded from UCSC XENA website (https://xenabrowser.net/datapages/). The detailed criteria for the inclusion and exclusion of patients enrolled into the current study can be found in the website of TCGA (https://www.cancer.gov/about-nci/organization/ccg/research/structural-genomics/tcga/studied-cancers). Surgical resection of biopsy biospecimens were collected from patients diagnosed with hepatocellular carcinoma (HCC), and had not received prior treatment for their disease (ablation, chemotherapy, or radiotherapy). As a part of The Cancer Genome Atlas (TCGA) network, the detailed clinic parameters of enrolled patients with hepatocellular carcinoma were originally published by The Cancer Genome Atlas Research Network [10].

The gene mutation data were obtained from UCSC XENA website. The RNA-seq data were batched and normalized into log2(tpm+0.001). The methylation and copy number of FAM49B were downloaded from cBioPortal database (https://www.cbioportal.org/).

The top 300 genes most positively associated with FAM49B were selected for enrichment analysis to reflect the function of FAM49B. GO analysis was performed using EnrichGO function in the “clusterProfiler” R package, KEGG analysis was performed using the EnrichKEGG function of the “clusterProfiler” R package. Gene Set Variation Analysis (GSVA) was conducted using the R package “GSVA” to calculate the pathway score of each sample based on the MSigDB database v7.1 (https://www.gsea-msigdb.org/gsea/msigdb/index.jsp).

The correlation between FAM49B and all protein-coding mRNAs was analyzed in each tumor from TCGA cohort. The mRNAs correlated with FAM49B (Pearson's correlation coefficient, p < 0.05) were ranked and subjected to GSEA using R package “clusterProfiler”.

The R package “ESTIMATE” was used to assess the stromal and immune score of each patient in TCGA cohort. We downloaded the infiltration data of 24 immune cells of 33 tumors from ImmuCellAI database (http://bioinfo.life.hust.edu.cn/ImmuCellAI#!/) and conducted the correlation analysis with FAM49B.

The IC50, gene expression data, clinical information of 192 drugs and 809 cell lines were downloaded from GDSC (https://www.cancerrxgene.org/). The association between FAM49B expression and IC50 values of 192 drugs were analyzed and Spearman's correlation coefficients were calculated.

10 pairs of HCC tissues and adjacent normal tissues were obtained from HCC patients from 2013 to 2015. The research protocols were approved by the Research Ethics Committee of Sir Run Run Shaw Hospital, School of Medicine, Zhejiang University. All participants gave written consent of their tissue samples and medical information to be analyzed for scientific research.

We further evaluated the FAM49B expression in paired tumor and adjacent normal tissues. FAM49B was over-expressed in tumor tissues in BLCA, BRCA, CHOL, COAD, ESCA, HNSC, KIRC, KIRP, LIHC, LUAD, LUSC, STAD, and UCEC (Figure 2A-M). In contrast, FAM49B was lowly expressed in tumor tissues of KICH and THCA (Figure 2N-O). The expression analysis of FAM49B in LIHC based on tumor grade was performed (Supplementary Figure 1). The results showed that the expression of FAM49B was positively correlates with the tumor grade in LIHC. In addition, qRT-PCR assay confirmed that FAM49B expression was higher in HCC tissues compared to adjacent normal tissues (Figure 2P). Furthermore, the protein level of FAM49B was higher in BRCA, COAD, KIRC, and UCEC using Ualcan database (Figure 3A).

We further evaluated the CNA and methylation status of FAM49B in pan-cancer. For the association between FAM49B and CNA, we found that FAM49B expression were positively correlated with CNA in LIHC (r = 0.31, p < 0.05) (Figure 3B). We further proved that the promoter methylation level of FAM49B have little relationship with FAM49B expression (r = -0.06, p > 0.05) in LIHC (Figure 3C). These results indicated that the CNA status mainly contribute to the high expression of FAM49B. 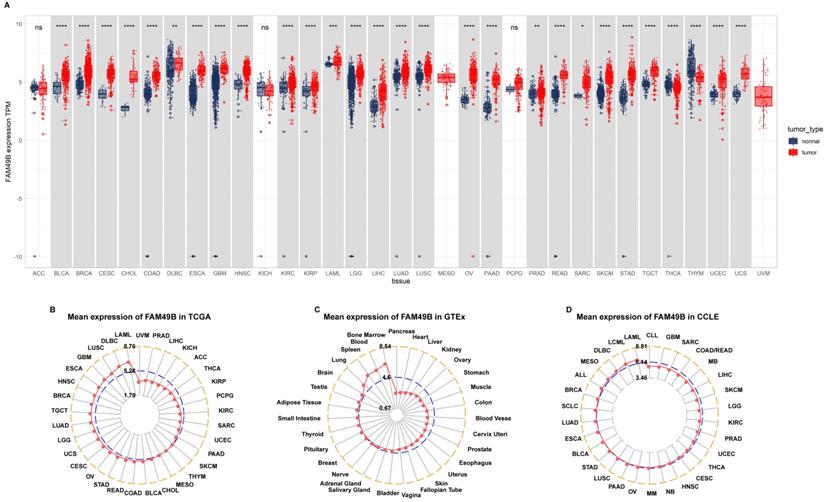 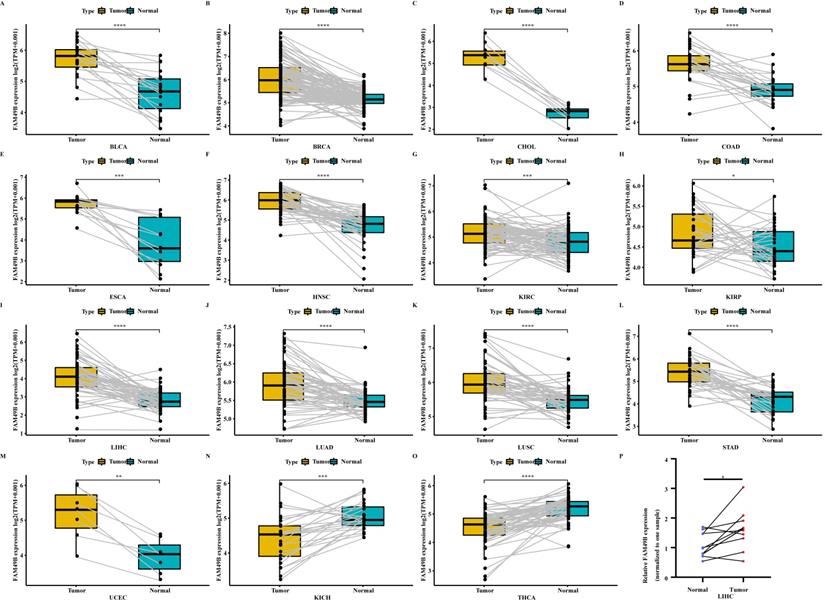 To evaluate the prognostic role of FAM49B in HCC and pan-cancer, we first conducted uniCox analysis. The uniCox overall survival results indicated that FAM49B was a risk factor in BRCA, HNSC, KICH, KIRP, LIHC, PAAD, and UVM and protective factor only in SKCM (Figure 4A). For the Kaplan-Meier analysis of OS, we observed that evaluated FAM49B expression predicted worse OS of patients in 17 tumors in TCGA cohort, such as ACC, BRCA, CESC, HNSC, KICH, KIRP, LAML, LGG, LIHC, LUAD, MESO, PAAD, SARC, THCA, UCEC, UCS, and UVM (Figure 4B).

Next, we conducted the GSEA to predict the pathways FAM49B might involve. The genes correlated with FAM49B (p < 0.05) were ranked and used to perform GSEA. We analyzed the reactome pathway (GSEA-Reactome) terms using R package “clusterprofiler” in pan-cancer. The results revealed that FAM49B was enriched in the cell cycle-related pathways (such as Cell Cycle and S Phase) and immune regulation-related pathways (Adaptive Immune System and Innate Immune System) in most tumor types, including BRCA, HNSC, KICH, KIRP, LIHC, and PAAD (Figure 6A-F). The top 20 results of gene ontology (GO), Kyoto encyclopaedia of genes and genome (KEGG), and Gene set variation analysis (GSVA) in FAM49B was also performed (Supplementary Figure 2). 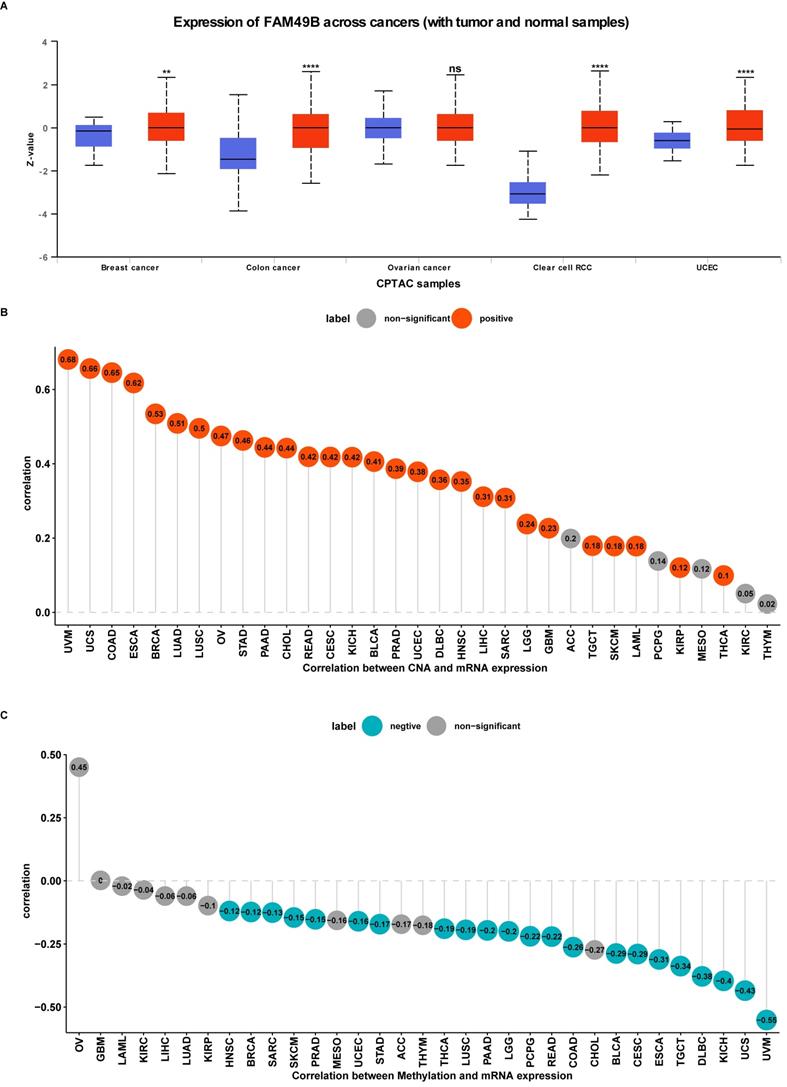 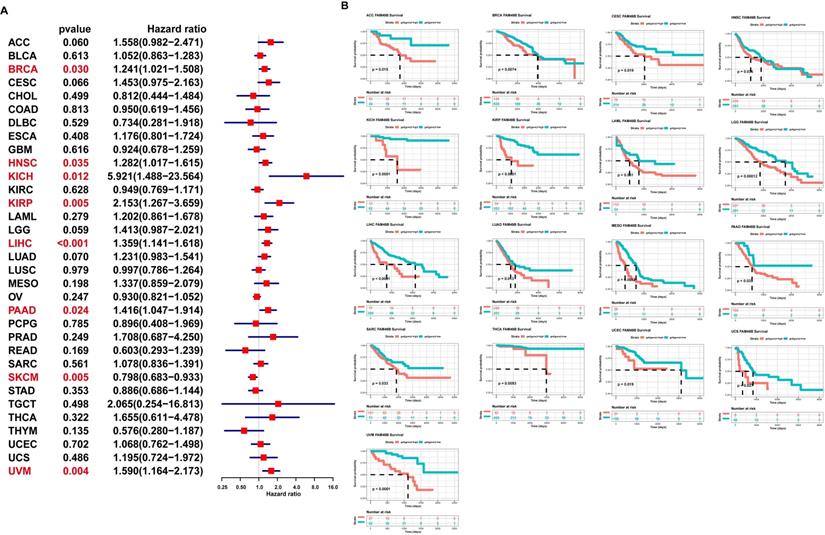 To understand the role of FAM49B in TIME of HCC, we performed the correlation analysis between FAM49B expression and stromal and immune scores calculated by R package “ESTIMATE”. Results indicated that FAM49B was positively correlated with stromal score, ESTIMATE score, and immune score and negatively correlated with tumor purity in most tumor types from TCGA (Figure 7A). While for LIHC of TCGA, FAM49B was positively associated with immune score and ESTIMATE score and negatively associated with tumor purity score, with no correlation with stromal score (Figure 7B-E).

GSEA of FAM49B. (A-F) The top 20 GSEA-Reactome results were showed in indicated tumors. 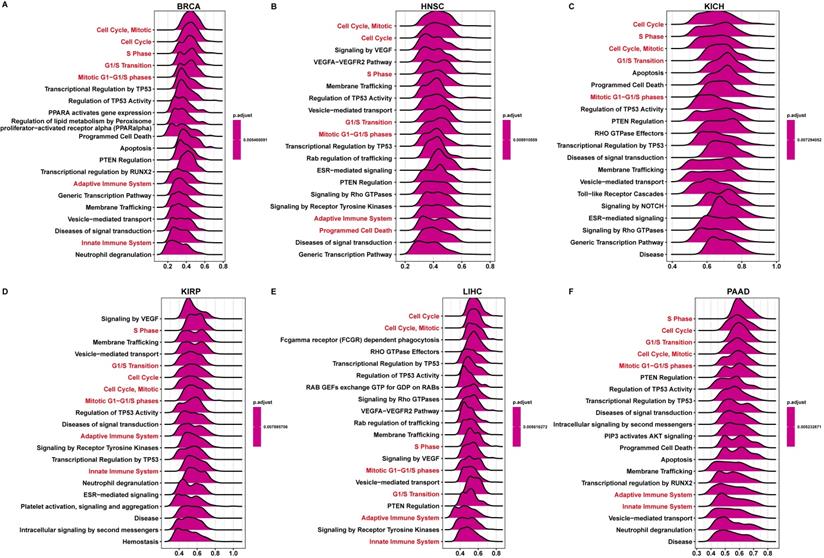 To prove the immune-regulation function of FAM49B, we downloaded the infiltration level of 24 immune cells from the ImmuCellAI database. Results of the correlation analysis suggested that FAM49B expression was positively correlated with immunosuppressive cells, such as iTreg, Tcm, and nTreg cells, in HCC (Figure 8A).

Methyladenosine is the most prevalent reversible methylation in mRNA and has critical roles in the tumorigenesis. The correlation analysis between FAM49B and m6A related genes was performed in pan-cancer. The data showed that FAM49B was positively correlates with m6A related genes in LIHC (Supplementary Figure 3).

Although some progress has been made in cancer-related treatment technology in recent years, the five-year survival rate of HCC is still very low, mainly because most patients are diagnosed in the final stage [11-13]. Recent studies have shown that the remodeling of TIME by cancer cells plays an important role in the development of HCC, weakening the response of HCC patients to treatment and leading to worse survival status [14,15]. Thus, the identification of essential genes that could affect TIME is urgently needed.

FAM49B was previously reported to involve in the progression of several diseases, including tumor [6]. For example, FAM49B was up-regulated and promoted proliferation and metastasis of gallbladder cancer cell [7]. However, its role in HCC remains unclear. In our study, we firstly assessed the expression of FAM49B and found the FAM49B expression was higher in tumor tissues compared with normal tissues in 26 of 31 tumors including HCC. In addition, qRT-PCR assay was used to validate the expression of FAM49B in HCC.

To evaluate the prognostic significance of FAM49B, we performed the uniCox and Kaplan-Meier survival analysis in TCGA cohort. Kaplan-Meier OS analysis proved that an elevated FAM49B expression predicted poorer OS of patients with HCC and other 16 tumors in TCGA cohort. The results of uniCox indicated that FAM49B was a risk factor for the OS, DSS, and PFI of HCC patients. 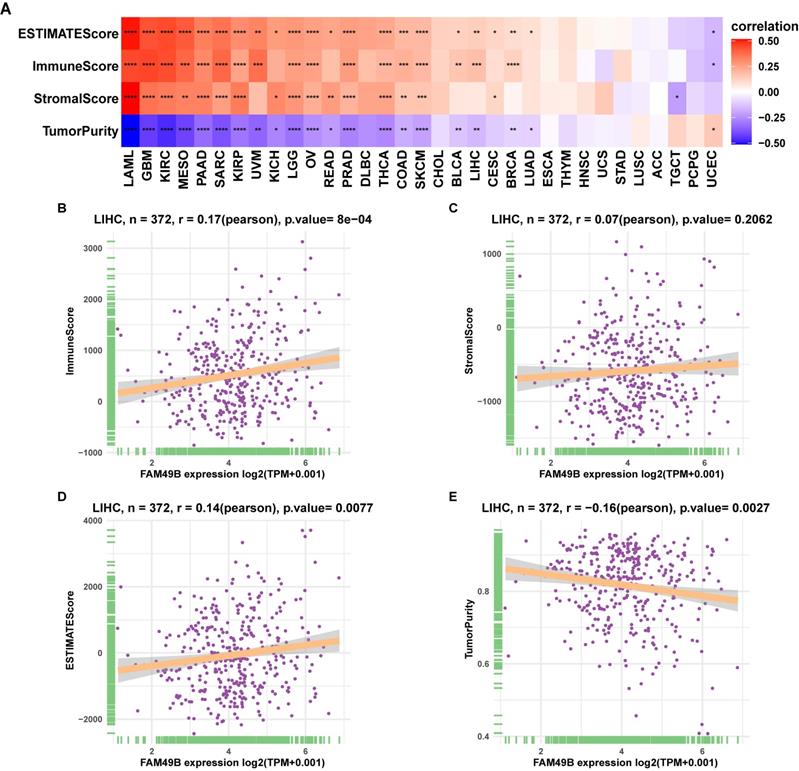 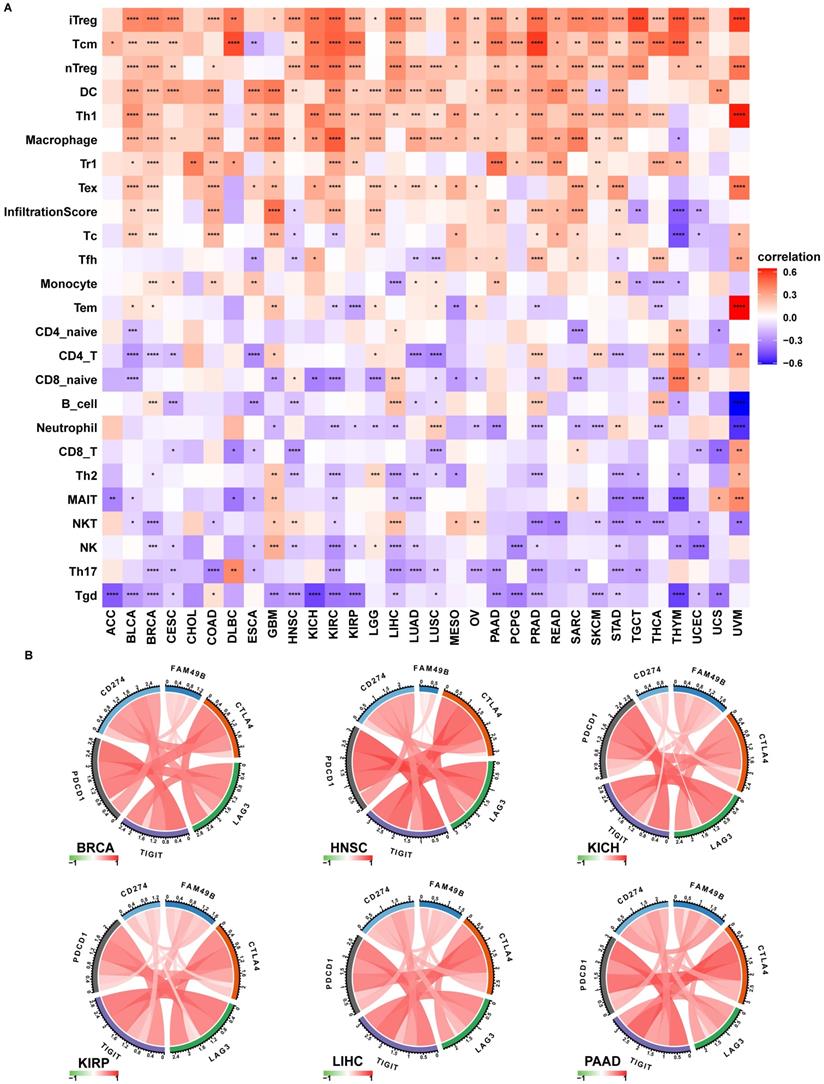 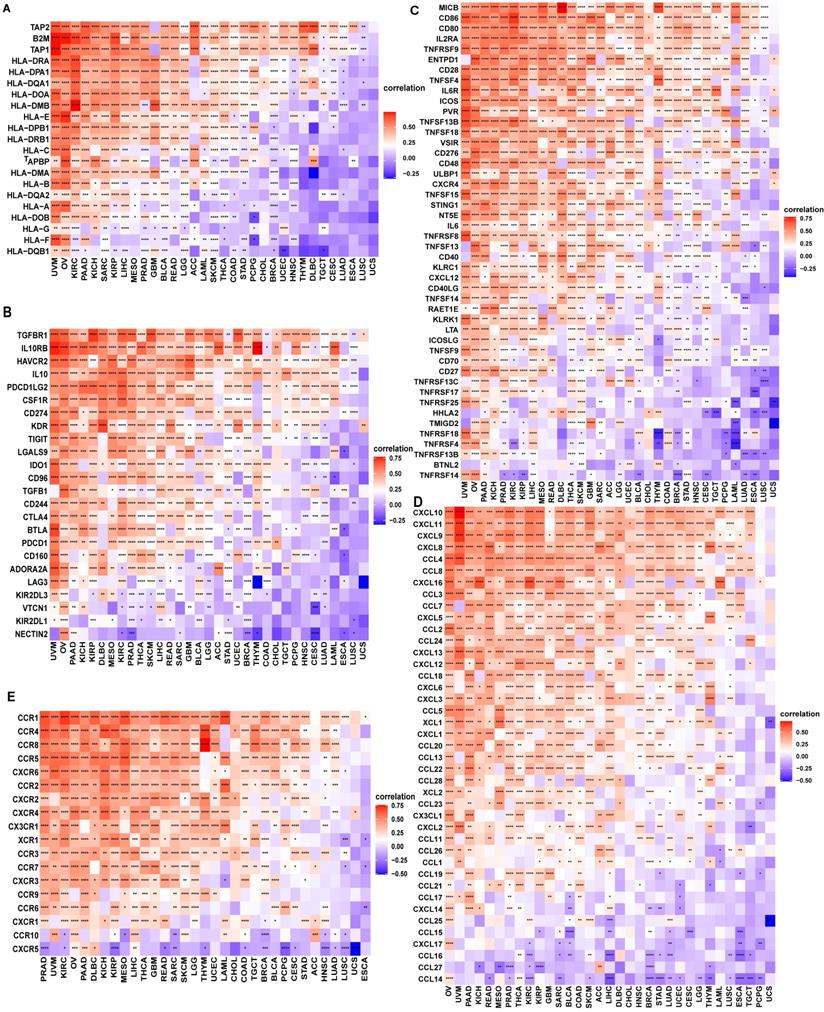 To explore the mechanism of FAM49B affecting prognosis, we performed the GSEA and found that the immune regulation relevant pathways were simultaneously enriched in HCC, indicating an essential role of FAM49B TIME. Thus, we further validated the results using immune cell infiltration data from the ImmuCellAI database. Results suggested that FAM49B was positively correlated with immunosuppressive cells, including iTreg, nTreg, and Tcm cells in HCC. In contrast, FAM49B was negatively correlated with immune killer cells, including NK cells in HCC. In addition, we proved that FAM49B expression was positively correlated with immune checkpoints (CTLA4, LAG3, TIGIT, PDCD1, and CD274), MHC genes, immunosuppressive genes, immune activated genes, chemokines, and chemokine receptors in most tumors including HCC. These results suggested that FAM49B play an essential role in tumor immunomodulatory process. 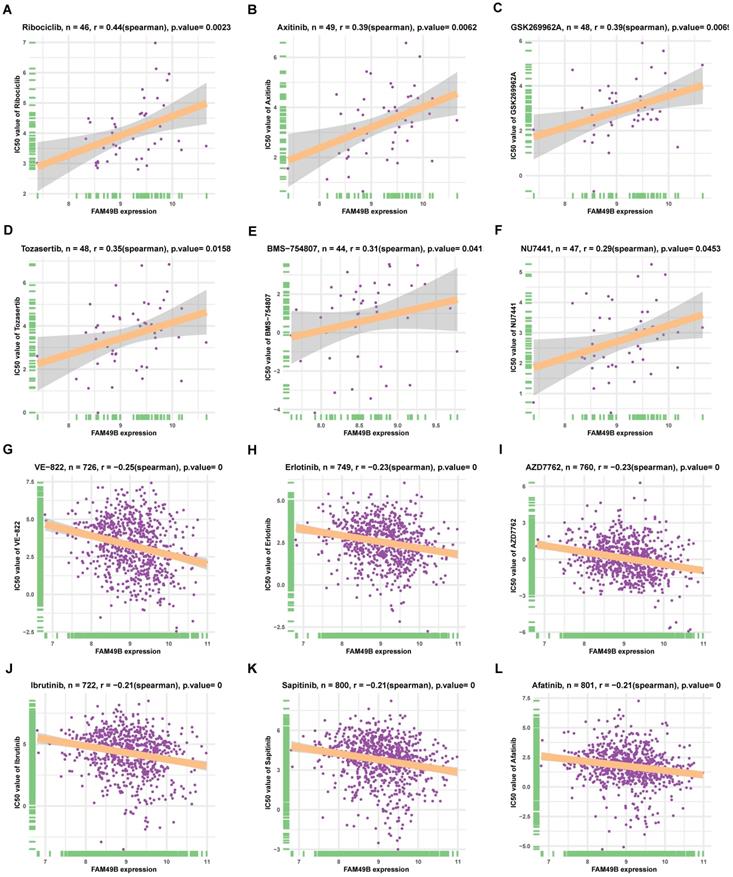 Additionally, we also performed the correlation analysis between FAM49B and IC50 of 192 anti-cancer drugs. We found that patients with high FAM49B expression might be resistant to several anti-cancer drugs, such as Ribociclib, Axitinib, GSK269962A, Tozasertib, BMS-754807, and NU7441.