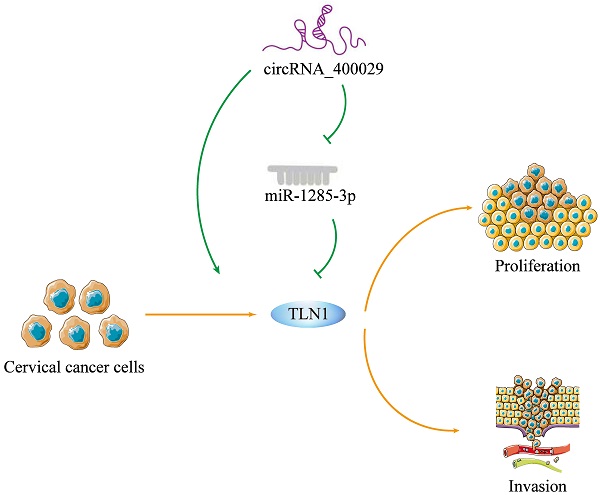 Background: Cervical cancer (CC) is the highest incidence of female malignant tumor in China. Circular RNAs (circRNAs) has been reported to affect CC progression by altering mRNA stability at the transcriptional level or binding to miRNAs to produce competitive endogenous RNA (ceRNA). For this purpose, our study was aimed to investigate the function effects and the potential regulatory mechanism of the circRNA_400029 in CC cells.

Materials and methods: The expression levels of circRNA_400029 and miR-1285-3p were detected by real time polymerase chain reaction (RT-PCR). Similarly, the mRNA and protein levels of TLN1 (Talin 1) was detected by RT-PCR and Western blot. Cell-Counting Kit-8 (CCK-8), EdU and Flow cytometry assay were used to detect cell proliferation, cell cycle and apoptosis. Then the Transwell assays were used to test cell migration and invasion. Besides this, the functional targets were confirmed by Dual luciferase reporter assays. Tumor xenograft in nude mice checked the result in vivo.

Conclusion: The overexpressed circRNA_400029 promoted CC proliferation, migration and invasion while deduced apoptosis by sponging miR-1285-3p to regulate TLN1. CircRNA_400029 was a potential onco-circRNA in CC, and might be a promised therapy target.