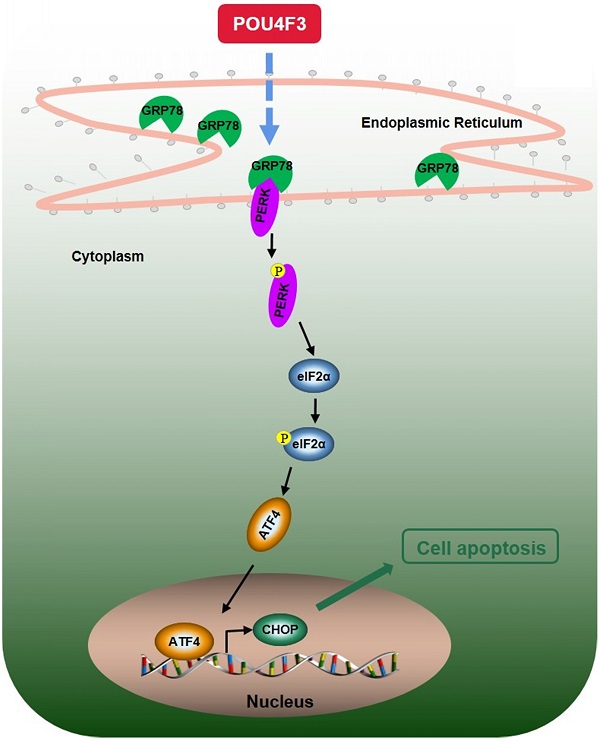 Lung cancer is the most common malignancy worldwide, and LUAD is the primary type of lung cancer. Recently, the POU transcription factor family has been associated with the development of multicancer, especially lung cancer. However, the relationship between POU domain class Ⅳ transcription factor Ⅲ (POU4F3) and lung cancer remains unknown. We detected the expression of POU4F3 in human LUAD and adjacent tissues with immunohistochemical staining, and we found that POU4F3 was expressed less in LUAD tissues compared with adjacent tissues. Patients with higher POU4F3 expression have more prolonged overall survival. We then constructed SPCA1 and A549 cells with stable overexpression or inhibition of POU4F3. We found that overexpressed POU4F3 suppressed LUAD cell proliferation in vitro and in vivo, according to CCK-8, colony formation, and xenograft assays. LUAD cell apoptosis was suppressed by POU4F3 overexpression based on Flow cytometry. The downregulation of POU4F3 yielded the opposite patterns. Next, we explored the possible mechanisms through which POU4F3 promoted the apoptosis of LUAD cells. Western blotting suggested that overexpression of POU4F3 significantly increased protein expression levels of the PERK/eIF2α/ATF4/CHOP and IRE1α/XBP1s pathways of ERS, while POU4F3 absence reversed the expressions of the above essential proteins in ERS pathways in SPCA1 and A549 cells. However, we found that PERK inhibitor but not IRE1 inhibitor can reverse the effect of POU4F3 overexpression on apoptosis. This study indicated that POU4F3 may work as a tumor suppressor in LUAD via regulating the PERK/eIF2α/ATF4/CHOP pathway. We made it possible to develop POU4F3 as a diagnostic, therapeutic, and prognostic target of LUAD.