This is an open access article distributed under the terms of the Creative Commons Attribution License (https://creativecommons.org/licenses/by/4.0/). See http://ivyspring.com/terms for full terms and conditions.
Citation:
Gasimli K, Raab M, Becker S, Sanhaji M, Strebhardt K. The Role of DAPK1 in the Cell Cycle Regulation of Cervical Cancer Cells and in Response to Topotecan. J Cancer 2022; 13(3):728-743. doi:10.7150/jca.66492. Available from https://www.jcancer.org/v13p0728.htm 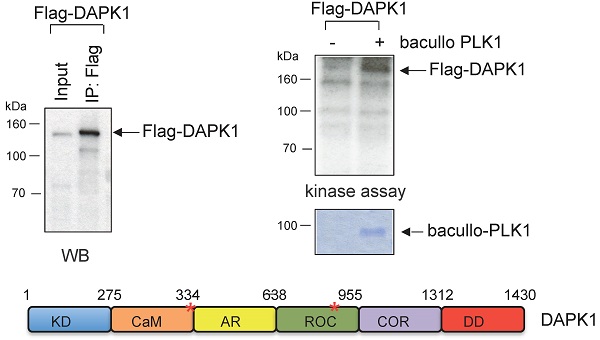 Cervical cancer is one of the most serious health conditions, with nearly 500,000 women developing the disease each year worldwide. At present, the treatment of recurrent cervical cancer remains largely ineffective, and efforts in cancer drug development are currently focused on critical serine/threonine kinases, such as death-associated protein kinase 1 (DAPK1) and polo-like kinase 1 (PLK1). In the current study, we aimed at exploring the cell cycle roles of DAPK1 and PLK1 in cervical cancer cells. To achive this goal, we used multiple methods including western blotting and assays for studying kinase activity, apoptosis, cell cycle, cell proliferation, immunofluorescence and proximity ligation. The present study demonstrated that, in cervical cancer cells, the enzymatic activity of DAPK1 was regulated in a cell cycle-specific manner. NIMA-related kinases, CDKs, PLKs and Aurora kinases regulate the function of centrosomes by orchestrating the separation of chromosomes during cell division. The present study added DAPK1 to this group of protein kinases due to its localization at centrosomes during mitosis. It was shown that DAPK1 was autophosphorylated at Ser308 in the G2 phase and during mitosis. From prophase to metaphase, the colocalization of PLK1 and DAPK1 at centrosomes was observed. Furthermore, the interaction of both these kinases could be demonstrated using proximity ligations assays and immunoprecipitations. DAPK1 was found to be a substrate of PLK1. Topotecan is an effective drug used for the treatment of cervical cancer. Therefore, the current study examined the role of DAPK1 in topotecan-induced cervical cancer cell death, and it was identified that RNA interference-based silencing of DAPK1 decreased the apoptotic effect of topotecan. Thus, these findings suggested that DAPK1 could be a biomarker and a potential target for the response to topotecan during the therapy of patients with cervical cancer.