Results: The Kaplan-Meier survival curve show that patients with higher immune scores have significantly better overall survival. We identified 1328 DEGs from immune score groups and 806 DEGs from the EGFR-TKI resistance cohort GSE123066. A total of 19 co-regulated genes were found, and the Cox regression model produced a significant statistical prognosis for five genes (CENPF, CYSLTR1, GLDN, PIGR and SCGB3A1). Multivariate Cox regression analysis showed that the selected five gene signatures could be used as independent prognostic indicators. Furthermore, GSEA and correlation analysis demonstrated that CENPF was positively correlated to the signalling pathway which related to EGFR-TKI resistance and the well-known bypass gene.

Lung cancer is one of the most frequently diagnosed malignancies and the leading cause of cancer related deaths [1]. It is categorised into adenocarcinoma (LUAD), squamous cell type and large cell type, and LUAD accounts for more than 40% of all lung cancer cases [2]. It has been reported that the activating mutations in tyrosine kinase domain of EGFR in LUAD were found 10%-15% in the American and Europe and 40%-50% in Asia [3]. Small molecule epidermal growth factor receptor tyrosine kinase inhibitors (EGFR-TKIs) are clinically effective for the first-line treatment of EGFR-mutated NSCLC [3-5]. However, the efficacy is transient, and the acquired resistance to EGFR-TKI is inevitable after 9-14 months of treatment [6-9].

The tumor microenvironment (TME) is consist of various cells, including endothelial cells, fibroblasts, immune cells and extra-cellular components that surround the tumor cells [10]. The TME can critically influence tumor initiation, progression and metastasis and plays a vital role in therapeutic efficacy [11]. Oncogenic alterations can promote an immunosuppressive TME through reduced tumor antigen expression and T-cell infiltration in tumor beds [12]. Tumor or stromal cells might result in microenvironment-induced drug resistance through secreting soluble factors, and tumor-associated macrophages have been generally considered the main regulators of therapeutic response in the TME [13].

Immune checkpoint plays a prominent role of immune suppression in tumors and their microenvironment [14]. In addition, tumors with low levels of immune infiltration are associated with the low rate of response to programmed death-1 (PD-1) inhibitors [15]. PD-1 inhibitors, such as nivolumab and pembrolizumab, are another important treatment for NSCLC. Compared with docetaxel, PD-1 inhibitors could prolong the overall survival of NSCLC patients who had been treated with platinum-based doublet chemotherapy [16, 17]. Moreover, a previous study found that PD-1 inhibitors are less effective in treating NSCLC patients with EGFR mutations, and low levels of both programmed death-ligand 1 (PD-L1) and CD8+tumor infiltrating lymphocytes in the TME might be the basis of this adverse clinical response [18]. Although immune-checkpoint inhibitors and EGFR-TKIs have shown promising clinical results for LUAD [19-21], the link between the two treatment remains unclear.

ESTIMATE is one of the widely used algorithms for quantifying the stromal and immune components in the TME of malignant tumor tissues [22]. It has shown effectiveness in a variety of malignancies, including breast cancer, urothelial cancer, multiple myeloma and neck squamous cell carcinoma [23-29]

In this study, we estimated the immune components of the TME and the EGFR-TKI resistance related genes and then identified reliable prognostic biomarkers for LUAD. The newly found genes might render tumor cells more sensitive to EGFR-TKIs and immunotherapy for LUAD patients.

The gene expression profiles and phenotype data such as pathological factors, and the survival outcome of the LUAD cohort, were obtained from The Cancer Genome Atlas (TCGA) (https://portal.gdc.cancer.gov/). Criteria for patient selection: Primary Site is bronchus and lung; Project ID is TCGA-LUAD; Workflow Type is HTSeq-Counts; Data Category is Transcriptome Profiling; Data Type is Gene Expression Quantification. The profiles of 526 LUAD and 59 adjacent normal lung tissues were included in the study.

The gene ontology (GO) analysis and the Kyoto Encyclopaedia of Genes and Genomes (KEGG) pathway enrichment analysis were performed by the R package 'clusterProfiler'[31], the false discovery rate (FDR) and p-value < 0.05 was set as the cut-off.

Validation of prognostic value of selected genes for LUAD

Univariate Cox hazards regression analysis was used to analyse the commonly regulated genes and confirm their estimated regression coefficients (β), and p < 0.05 was considered to have prognostic value. Kaplan-Meier plotter (www.kmplot.com/lung) [32] were used to verify the prognostic value of the selected genes. Immunohistochemical staining of prognostic genes obtained from The Human Protein Atlas (https://www.proteinatlas.org/) [33].

The protein-protein interaction (PPI) network was obtained from the STRING database [34] (http://string-db.org). The PPI network was subsequently visualised using the Cytoscape [35] software, and the “cytohubba” plug-in was used for modular analysis to identify the top 10 hub genes.

Workflow of the current work. 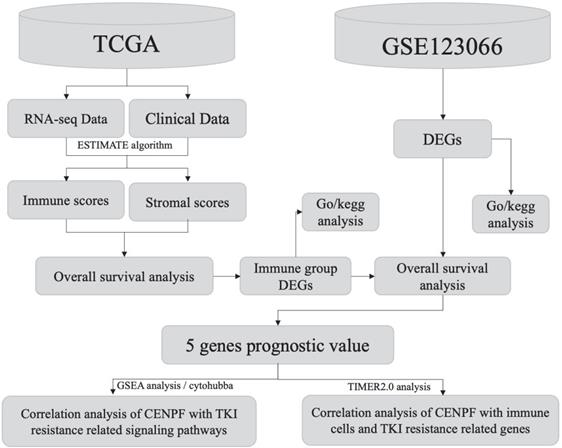 The correlation between CENPF and the EGFR-TKI resistance associated genes [6] in the LUAD was identified through TMIE2.0 (https://cistrome.shinyapps.io/timer/), with the Spearman's rho value and the estimated statistical significance [36, 37].

Workflow of the current work is displayed in Figure 1. 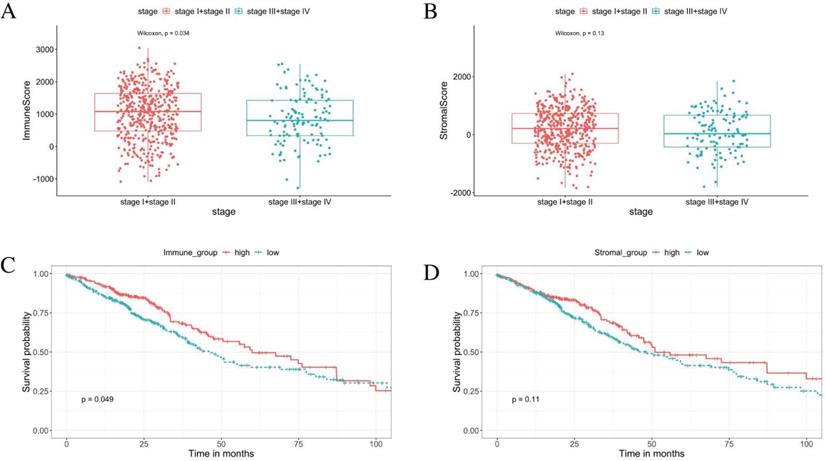 The principal component analysis (PCA) result indicates an acceptable intra-group data repeatability for immune scores. The distances between samples in the low immune scores group were short, while those between samples in the high immune scores group were also short in dimension-1 (Dim1) (Figure 3B). From the comparison of the low and high immune score groups, we identified 1328 different expression genes, including 166 up-regulated genes and 1162 down-regulated genes. The heatmap (Figure 3A) and the volcano plot (Figure 3C) show the representatives of the DEGs. 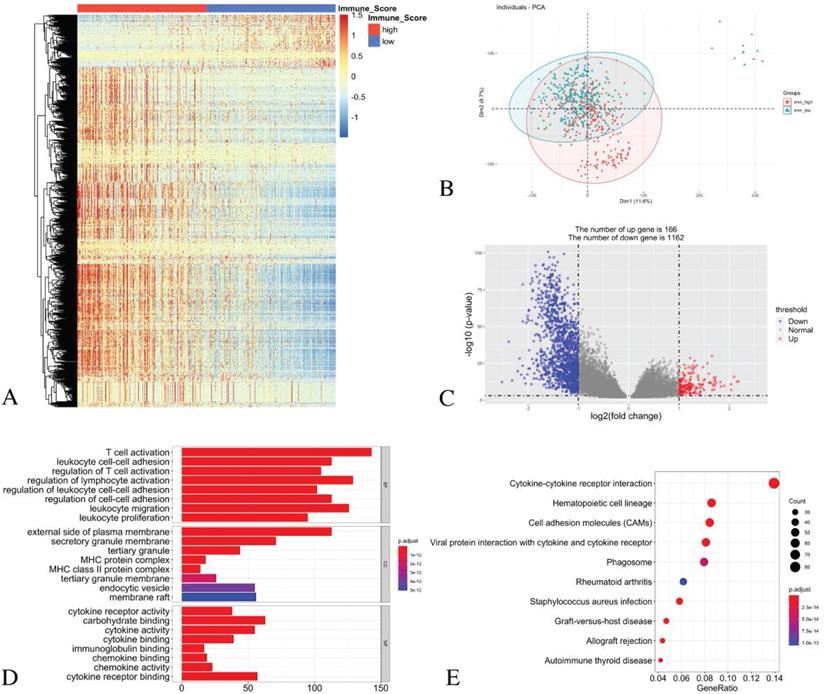 Identification of DEGs in GSE123066 cohort and function enrichment analysis 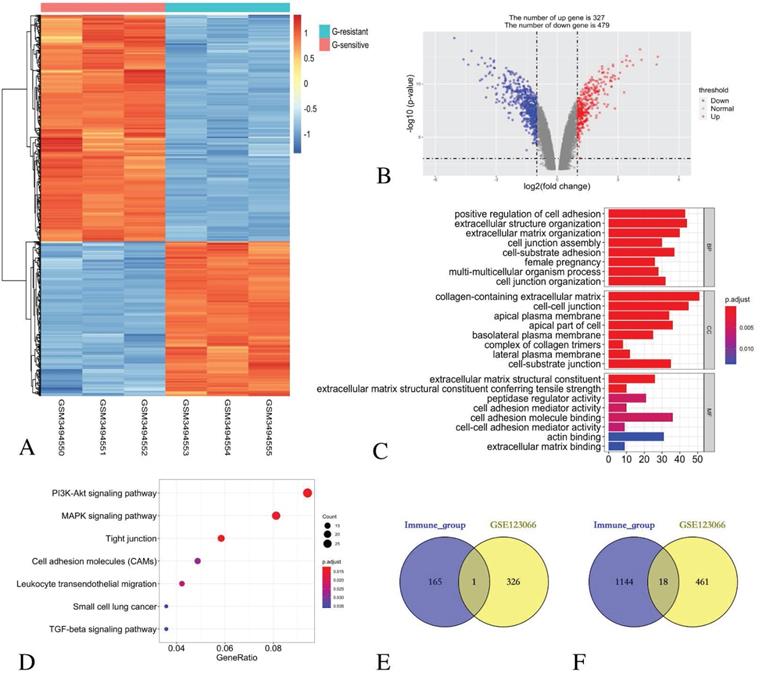 The univariate Cox hazards regression analysis revealed that five genes (i.e., CENPF, CYSLTR1, GLDN, PIGR and SCGB3A1) were significantly related to the OS and their estimated regression coefficients were confirmed (P < 0.05, Table 2). Then, we constructed the K-M survival curves to validate the prognostic value of the selected genes. Remarkably, the high levels of CEBPF expression could significantly predict a poor OS, and the low levels of the CYSLTR1, GLDN, PIGR and SCGB3A1 expressions could significantly predict a poor OS (log-rank test p < 0.05, Figures 5A-E). Multivariate Cox regression analysis was performed with the following factors: gender, age, smoking history, AJCC stage and risk score. The results show that the risk score is still significantly related to OS (Figure 5F).

We ranked 526 LUAD samples by their relative CENPF expression in the TCGA dataset and compared the top 100 samples (CENPF_High) and the bottom 100 samples (CENPF_Low) through GSEA KEGG enrichment analysis. Given the limited space, only the top 20 pathways are listed in Table 3 (NOM p-value < 0.05, FDR < 0.25).

The results indicate that the CENPF_High tumor samples enrich the gene signatures associated with “small cell lung cancer” and “ErbB signalling pathway” compared with CENPF_Low samples (Figures 7A-B). The transcriptional expression profiles of the 45 core genes in the ErbB signalling pathway are presented in a heatmap (Figure 7C). To identify the significant module, the STRING online database and Cystoscope software were used to merge the 45 core genes. The PPI network of the core genes was constructed (Figure 7D), and the most significant module was obtained using the Cystoscope plug-in 'cytohubba' (Figure 7E and Table 4). 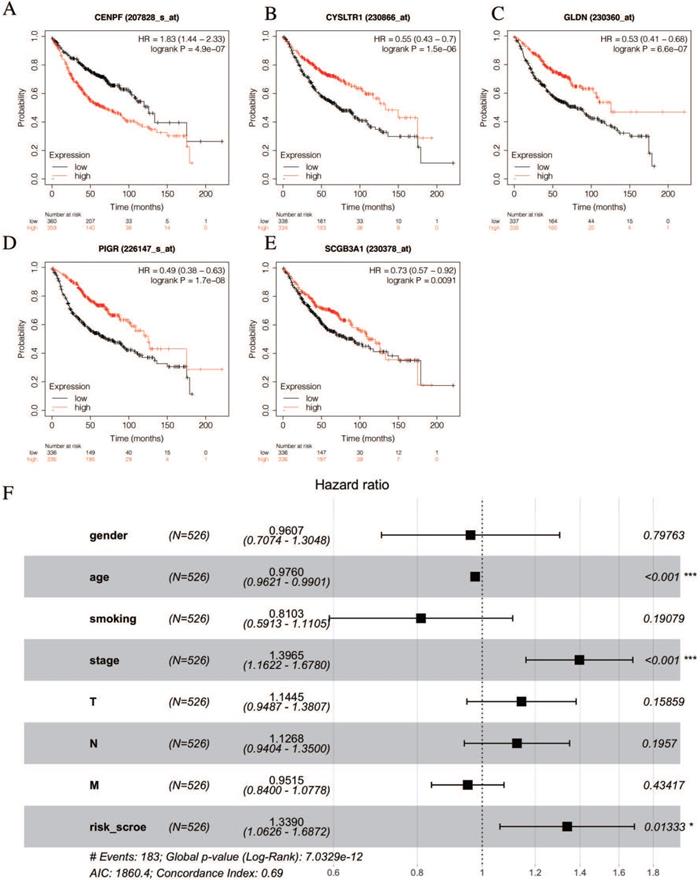 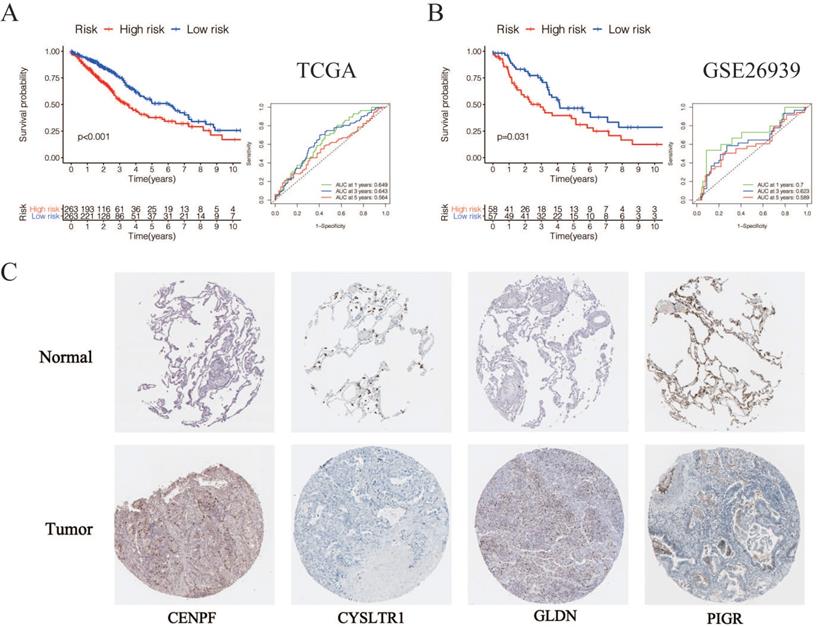 In the current work, we tried to identify prognostic genes based on the TME which may be related with the EGFR-TKIs resistance and the efficiency of immunotherapy in LUAD.

First, we find immune score was positively correlated with overall survival and advanced tumor stage have a lower immune score than the early stage. Immune suppression leads to tumor progression via modulating the TME in various ways, such as recruitment of immunosuppressive cells, tumor-associated myeloid-derived suppressor cells, tumor-associated macrophages, and Tregs to tumor sites by migratory and survival factors [38]. Then, we identified 1328 DEGs and GO term analysis revealed that many of these DEGs were related to the TME which suggested the immune cells played an important role in LUAD and the extracellular matrix molecules was closely associated with the establishment of the LUAD [39, 40]. In addition, KEGG pathway enrichment analysis shows that the DEGs were mainly involved in cell adhesion molecules and cytokine-cytokine receptor interaction, suggesting that the immune system was critical to form the complex LUAD tumor-microenvironment [41, 42]. These findings indicate that the up-regulation of the DEG in the low immune score group might be associated with the regulation of the TME, and immunosuppression was formed through this regulation, promoting tumor progression.

Identification of hub genes by cytoHubba. 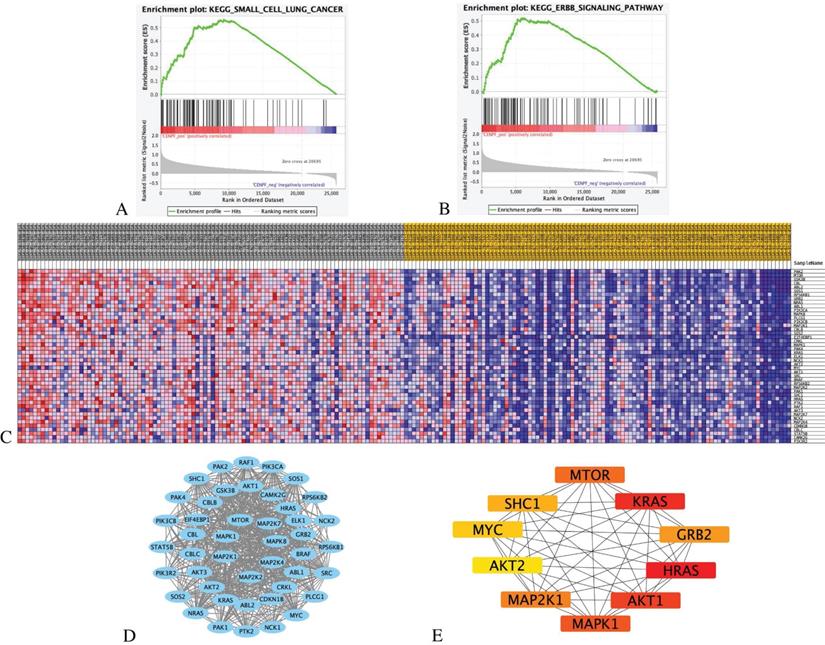 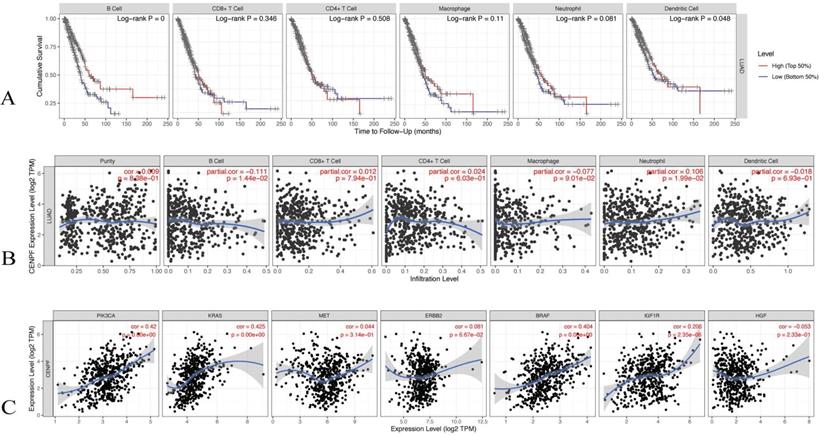 We then identified 19 common DEGs that were involved in the immune score group and the EGFR-TKI resistance cohort GSE123066. Five of these common DEGs were proved to be related with the overall survival. CENPF, CYSLTR1, GLDN, PIGR and SCGB3A1 were selected as the prognostic biomarkers associated with TME immune cell infiltration and the acquired EGFR-TKI resistance.

We are particularly interested in CENPF which is the expression up-regulated in the low immune score group and EGFR-TKI resistance samples, and the expression level of CENPF was negatively related with the overall survival for LUAD. Centromere Protein F (CENPF) is related to the cell cycle and cell proliferation in several malignant tumors [47]. A previous study showed that the high expression level of CENPF in NSCLC indicated a poor clinical prognosis [48].

To further identify the functions of CENPF in LUAD, we performed KEGG enrichment by GSEA method. The result showed that small cell lung cancer and the ErbB signalling pathway were obviously enriched in CENPF high expression phenotype. These results are consistent with the GSE123066 KEGG analysis results, indicating that the high expression level of CENPF is related to the promotion of acquired EGFR-TKI resistance. Additionally, 45 core genes were identified in the enrichment of the ErbB signalling pathway, and 10 hub genes (i.e., HRAS, KRAS, AKT1, MAPK1, MTOR, MAP2K1, GRB2, SHC1, MYC, AKT2) were screened according to the Cytoscape plug-in cytoHubba. The mutations of KRAS, AKT1 and MAPK1 have been reported as bypass mutations which are another common mechanism of the acquired EGFR-TKI resistance that can activate the same key downstream effectors as EGFR, thereby promoting the growth and survival of tumor cells [45, 49]. Downstream of PI3K-AKT, increased mTOR expression is related to EGFR-TKI resistance in clinical samples [50].

The TIMER database shows that the high level of B cell infiltration is associated with good cumulative survival rate, and there is a significant negative correlation between the CENPF expression and the B cell infiltration. These findings indicate that CENPF may regulate the immune cell infiltration in LUAD. Furthermore, the CENPF expression was positively related with PIK3CA, KRAS, BRAF and IGF1R which are bypass mutations identified in acquired EGFR-TKI resistance patients, and all of them predicted a poor response to EGFR-TKI therapy [51-54]. These results validate the probable function of CENPF in promoting acquired EGFR-TKI resistance.

In conclusion, we extracted a series of genes related to the tumor microenvironment based on the immune score calculated by the ESTIMATE algorithm. Then we used GEO dataset to filter out genes related to EGFR-TKI resistance. Survival analysis and Cox hazards regression analysis were performed to validate prognostic value. Finally, we systematically identified that CENPF, CYSLTR1, GLDN, PIGR and SCGB3A1 are novel independent prognostic biomarkers associated with acquired EGFR-TKI resistance and immune infiltration for LUAD patients. Furthermore, GSEA analysis and TIMER2.0 were performed to detect the correlation of CENPF with bypass genes and tumor-infiltrating immune cells. However, further mechanism investigation has not been conducted, we believe these genes may provide novel insights for new targets to overcome EGFR-TKI resistance and regulation of the immune infiltration in LUAD.

All the data used in this study were publicly available at The Cancer Genome Atlas portal (TCGA, https://portal.gdc.cancer.gov/) and Gene Expression Omnibus (GEO, https://www.ncbi.nlm.nih.gov/geo/).

WJ-C and QH-Z conceived and designed the study. WJ-C, W-L and ZK-L collected and analyzed the data. WJ-C, GZ-M and YF-D wrote the manuscript. ZK-L and W-L reviewed the draft. LL-Z prepared Figures and Tables. All authors have read and agreed to the published version of the manuscript.