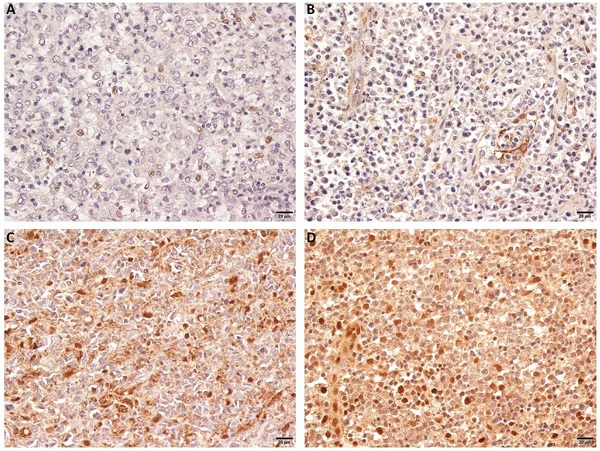 OTUD7B is a deubiquitinase and has been reported as a prognostic factor in various solid tumors. However, its prognostic value in lymphoma patients remains unclear. We detected OTUD7B expression levels in 160 diffuse large B-cell lymphoma (DLBCL) tissue samples by immunohistochemistry, and analyzed correlations between its expression and clinic-pathologic parameters as well as clinical outcomes. We also investigated association between OTUD7B expression and chemotherapeutic drugs anti-tumor activity in vitro. We found that OTUD7B overexpressed in 129 (80.6%) cases, and patients with overexpression of OTUD7B experienced better overall survival comparing to those with OTUD7B low expression (P=0.021). Multivariate Cox regression analysis illustrated that OTUD7B was an independent prognostic indicator. In DLBCL cell lines, we found that Chidamide could up-regulate OTUD7B in several DLBCL cell lines, and also had synergistic effect with doxorubicin at low concentration. Our data illustrated that OTUD7B deficiency is a negative predictor of clinical outcome, and might be a potential therapeutic target in the treatment of diffuse large B-cell lymphoma.

Diffuse Large B-cell lymphoma (DLBCL) is the most common subtype of lymphoma and most patients can be cured under immune-chemotherapy [1]. One third of patients will relapse and acquired resistance to chemotherapy and turned to incurable. The identification of biomarkers of clinical behavior may aid in the implementation of novel therapeutic strategies.

OTUD7B is a member of the A20 family of DUBs, it is a deubiquitinase and regulates inflammation, T-cell activation, as well as some signaling pathways [2-5]. Recent researches showed its potential role in genome maintenance and cancer cell proliferation. Accumulated evidence indicated that low expression of OTUD7B associated with inferior survival in various solid tumors, such as breast cancer, hepatocellular carcinoma, and lung cancer [6-8]. The role of OTUD7B expression in lymphoma patients remains unclear. Our present study aims to evaluate the prognostic significance of OTUD7B in patients with DLBCL and to characterize its molecular mechanisms in the treatment of this kind of disease.

Formalin-fixed, paraffin-embedded tissue slides were deparaffinized and rehydrated firstly. After the antigen retrieval which has been done by boiling slides in EDTA antigen retrieval solution (pH 8.0) for 20 min, the slides were immersed in 3% hydrogen peroxide solution for 15 min and blocked with 1% bovine serum albumin (BSA) for 30 min at room temperature. Then the slides were incubated with primary antibody against OTUD7B (Proteintech, IL, USA) overnight at 4℃ at 1:150 dilutions, and incubated with secondary antibody for 1 hour at room temperature. The slides were washed three times with PBS (pH 7.4) between each incubation step and the slides with no primary antibodies added served as negative controls. At last, the slides were visualized using the Dako Envision System (Dako, Glostrup, Denmark) following the manufacturer's instructions and subsequently counterstained with hematoxylin.

Protein expression levels were determined on the basis of staining intensity and the percentage of immunoreactive cells. Tumors were considered positive when at least 20% of tumor cells expressed OTUD7B. The expression was evaluated in different areas with at least 1000 tumor cells were counted. Assessment was done by three pathologists without prior knowledge of the clinical features or follow-up data of the patients.

All the cell lines were maintained in RPMI 1640 supplemented with 10% heat-inactivated fetal bovine serum, 100U/ml penicillin and 100 g/ml streptomycin, maintained in 5% CO2 at 37℃.

Cells were lysed in 200 μl RIPA lysis buffer and the supernatant were added with same volume of 2× SDS loading buffer, then boiling for 5 minutes. The protein were separated by 10% SDS-PAGE and transferred to PVDF membranes (Millipore,Temecula, CA, USA). The membrane was incubated with rabbit monoclonal antibody against OTUD7B (Proteintech, IL, USA) at 1:2000 dilutions overnight at 4 °C. After washed 3 times with TBST, the membrane was incubated with horseradish peroxidase linked secondary antibodies for 1 hour at room temperature. Proteins were visualized using Tanon full-automatic light detecting system with the BeyoECL Star (Ultra hypersensitive ECL chemiluminescence kit). Rabbit polyclonal to GAPDH was used as loading control. All the data were confirmed by three individual experiments.

All analyses were performed using PASW Statistics 18 (SPSS Inc., Chicago). Correlation between the OTUD7B expression and clinical variables were tested by Pearson Chi Square test. Kaplan-Meier survival curves were constructed for survival analyses, and differences were tested by the log-rank test. Overall survival was defined as the time between the date of biopsy and the date of death or the date of last contact. Progression-free survival (PFS) refers to the period from the beginning of treatment to the observed progression of the disease or the occurrence of death for any reason. The data of patients alive at the end of the study were censored. All P values were two-sided, and the results were considered significant if P < 0.05.

We observed that OTUD7B was primarily localized in the nucleus and on cytoplasm. The protein strongly expressed in 129 (80.6%) cases. Figure 1 showed representing images of negative and positive expression of OTUD7B. Overexpression of OTUD7B was observed more frequently in patients with non-GCB subtype than GCB subtype (53% vs. 47%), but there was no statistically difference (P=0.31).

We found that low expression of OTUD7B was more detected in patients with more than one extranodal sites (P=0.006) and high IPI scores (P=0.022) (Table 1). Patients with overexpression of OTUD7B experienced better overall survival comparing to those with OTUD7B low expression (P=0.021). Besides, Kaplan-Meier analysis showed that patients with low LDH levels, achieved CR/PR after first-line treatment regimens had better OS (P=0.014, <0.0001) (Figure 2). A multivariate Cox proportional hazards model was performed to identify whether the protein showed prognostic significance compared with gender, age, ECOG, stage, LDH level, extranodal sites, IPI score, bulky disease, cell of origin and first-line treatment outcome. It indicated that overexpression of OTUD7B (P = 0.04, HR = 2.359, 95%CI: 1.039-5.358) was an independent prognostic factor (Table 2). We also analyzed PFS and OS in patients with different OTUD7B expression and their cell of origin, and found there was no statistically significant difference. 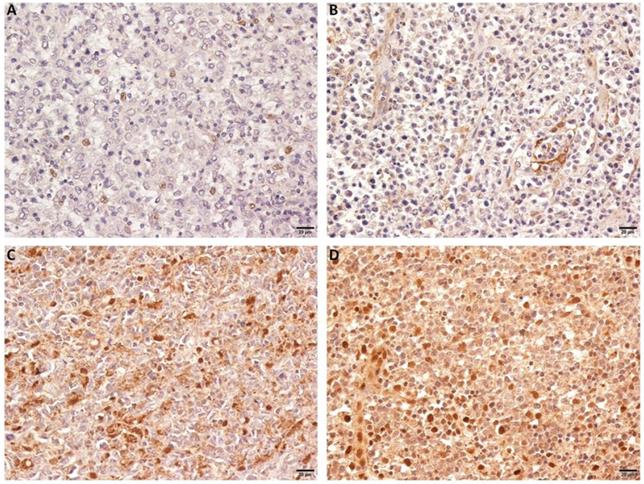 Correlation of OTUD7B, LDH and ORR with DLBCL patients' overall survival. Kaplan-Meier curves showing the association between OTUD7B expression (A), LDH levels (B), ORR (C) and OS in DLBCL patients. All the P values are shown in the graph, by log-rank test.

Univariate and multivariate analysis of overall survival in DLBCL patients

OTUD7B is a positive regulator of dorubixin responsiveness in B-lymphoma cells. (A) The overexpression and down-regulation of OTUD7B in RL and RL-4RH cells was examined by western blotting assay. (B) OTUD7B overexpressed RL cells and OTUD7B depleted RL-4RH cells were treated by 0.5μM or 1 μM, then the cell viability were monitored by MTT assays.

An OTUD7B increasing reagent improves the efficiency of doxorubicin. (A) Screening of chemotherapy reagents in effecting OTUD7B expression in multiple DLBCL cells. (B-C) IC50 of doxorubicin and chidamide in RL cell line. (D-G) Chidamide and doxorubicin had synergistic effect at low concentration.

To study the role of OTUD7B in improving chemosensitivity, OTUD7B was stably overexpressed in a DLBCL cell line, resulting in the enhancement of cytotoxicity during doxorubicin treatment. Accordingly, Down-regulation of OTUD7B exhibited an opposite effect, which desensitized DLBCL cells to doxorubicin (Figure 3).

In view of OTUD7B as a negative regulator of doxorubicin resistance, we hypothesized that there is a chemotherapeutic agent, which upregulates OTUD7B, may contribute to moderating doxorubicin irresponsiveness in DLBCL patients. To find an OTUD7B positive regulator, we screened a set of frequently-used DLBCL drugs for their effects in OTUD7B expression. The results showed that Chidamide remarkably up-regulated OTUD7B expression levels in several B-cell lymphoma cell lines (Figure 4A). Furthermore, we demonstrated that the combination of chidamide and doxorubicin revealed a synergistic effect in inhibiting growth at relatively low concentrations in B-cell lymphoma cell line (Figure 4B-G).

DLBCL is a heterogeneous disease in both clinical and biological settings. Identification of prognostic biomarkers is of vital importance. Increasingly evidences highlight the importance of OTUD7B in several types of human malignancies [10, 11]. However, the clinical relevance of this protein in DLBCL is not entirely identified. Herein, we found that OTUD7B could serve as a novel biomarker indicative of favorable prognosis in DLBCL patients.

Although the molecular events underlying clinical significance of OTUD7B remain unclear, it is speculated by existing works. A recent study illustrated a role of OTUD7B in cell-cycle regulation, which could prevent the degradation of APC/C substrate, and lead to deregulation of mitotic process [12]. More importantly, OTUD7B has also been reported to participate in NF-κB signaling pathways. It has long been known that NF-κB signaling is critical for DLBCL development and contributes to drug resistance. Hyperactivation of NF-κB is associated with interior prognosis [13-15]. The activation of NF-κB requires the degradation of an inhibitory protein TRAF3. OTUD7B deubiquitinates and stabilizes TRAF3, attenuating the noncanonical NF-κB pathway [16]. Therefore, OTUD7B down-regulation may accelerate DLBCL progression and counteracts chemotherapy through promoting NF-κB activity.

Further analysis showed that low expression of OTUD7B was associated with DLBCL patients having more than one extranodal sites and high IPI scores (P=0.006, 0.022), which was in consistent with other researches about this protein in solid malignant tumors. Downregulation of OTUD7B was reported to be associated with large tumor size, more satellite nodules and more vascular invasion in hepatocellular carcinoma and lung cancer [7, 17]. Also there were studies demonstrated that interference of OTUD7B expression promoted the migration and invasion of cancer cells in vitro [18, 19]. It could be easily explained that more sites of extranodal lesions, and high IPI score associated with worse OS of DLBCL patients [20, 21]. Moreover, we carried on multivariate Cox regression analysis, and found that OTUD7B was an independent prognostic indicator in DLBCL patients.

Remarkably, the findings of this work provide a new insight in the treatment of DLBCL, that is, up-regulation of OTUD7B may synergize the anti-tumoral activity of doxorubicin. Functional studies showed that forced expression of OTUD7B sensitized B-cell lymphoma cell lines to doxorubicin. To extend this phenotype to a clinical actionable way, we screened a handful of drugs in increasing OTUD7B expression. The results showed that Chidamide is capable of elevating OTUD7B in several DLBCL cell lines. Chidamide is a histone deacetylase inhibitor of the benzamide class with profound antitumor activity in peripheral T cell lymphoma. It also has shown promising result in the treatment of DLBCL [22-24]. In vivo pharmacological assays revealed that Chidamide cooperatively improved the inhibitory efficacy of doxorubicin. Taken together, our data shed light on a new treatment modality of DLBCL and OTUD7B might be a potential biomarker in deciding the use of chidamide.

In conclusion, our present data suggested that OTUD7B might be a novel anti-oncogene that has a pivotal role in DLBCL and contribute to the selection of patients who may benefit from chidamide-contained treatment therapy. Further investigations are still needed.

This study was approved by the Institutional Review Board of the Fudan University Shanghai Cancer Center, and the research was conducted in accordance with the 1964 Helsinki declaration and its later amendments or comparable ethical standards.

9. Czuczman MS, Olejniczak S, Gowda A, Kotowski A, Binder A, Kaur H. et al. Acquirement of rituximab resistance in lymphoma cell lines is associated with both global CD20 gene and protein down-regulation regulated at the pretranscriptional and posttranscriptional levels. Clinical cancer research: an official journal of the American Association for Cancer Research. 2008;14:1561-70