Background: Non-small cell lung cancer (NSCLC) accounts for the largest pathological type of lung cancers, and it is characterized by high incidence and poor prognosis. However, the molecular mechanisms involved in development and progression of NSCLC are not well elucidated. In this study, we aimed to explore the role and regulatory mechanism of RPS9 in NSCLC.

Materials and methods: The RPS9 expression in NSCLC tissues and cell lines was assessed by qRT-PCR and western blot. Knockdown of RPS9 induced by RNA interference (RNAi) method in PC9, A549 and H1299 cells. Overexpression of RPS9 induced by transient transfection in H292 cells. Cell proliferation, colony formation, metastasis and apoptosis abilities were determined by CCK-8 assay, colony formation assay, transwell assay and flow cytometry, respectively. The host signaling pathways affected by RPS9 were screened by antibody library and proved by western blot.

Conclusion: Our study clarified that knockdown of RPS9 inhibits the progression of NSCLC via inactivation Stat3 and Erk signaling pathways.

Lung cancer is one of the most frequently diagnosed malignant cancer and the first cause of cancer-related death in the world [1, 2], with 2.09 million new cases and 1.76 million deaths worldwide in 2018 [3]. NSCLC accounts for 75-80% of all pathological type of lung cancers. Although great improvements have been made in screening of people at high risk, advancements in research and drug development and systemic therapies (such as surgical resection, personalized biomarker-driven treatment, immunotherapies, and chemo-radiation treatments), most NSCLC patients are diagnosed at an advanced stage and their prognosis is unsatisfactory [4]. NSCLC remains a highly lethal disease and the overall 5-year survival rate of NSCLC patients is less than 25% [5]. Thus, it is crucial to expand our knowledge of new biomarkers and molecular basis of carcinogenesis for early diagnosis, intervention, and treatment to reduce the mortality of NSCLC.

RPS9 is ribosomal protein gene and located at chromosome 19ql3.4 [6]. RPS9 protein directly binds to the 18S rRNA and plays an essential role in ribosome biogenesis and stabilization, DNA repair and developmental regulations, mRNA unwinding, decoding accuracy and malignant transformation [7-10]. For example, Pnueli et al. demonstrated that RPS9 participated in the regulation of mRNA translation and possibly translation termination [11]. Studies have shown that RPS9, as a novel B23/ NPM binding protein, is necessary for normal cell growth and proliferation [12].

Previous studies have suggested that RPS9 dysregulation was involved in tumorigenesis, such as pancreatic cancer, head, and neck cancer (such as head and neck squamous cell carcinoma) and so on [13-15]. Moreover, evidence indicated suggested that RPS9 knockdown suppressed proliferation through P53 independent mechanisms in U2OS cells, impaired 18S rRNA production in glioma cells by P53 and accelerated cell death in cervical carcinoma HeLa cells [16]. In this context, RPS9 is involved in tumorigenesis in both positive and negative ways depending on different tumor type and regulatory mechanism. The role of RPS9 in NSCLC was previously revealed, but the function and related regulatory mechanism of RPS9 in the development of NSCLC remain obscure.

In this research, we provide evidence for the first time that RPS9 is upregulated in NSCLC patients and cell lines and overexpression of RPS9 indicates poor prognosis. Strikingly, RPS9 knockdown inhibits NSCLC cell proliferation, colony formation and metastasis. In addition, RPS9 suppressed apoptosis in NSCLC cells. More interestingly, we found that knockdown of RPS9 could inhibit the progression of NSCLC via regulating Stat3 and Erk signaling pathways. This study highlights the function of RPS9 in NSCLC growth and metastasis and may facilitate development of new diagnostic or therapeutic biomarker to improve the outcome of NSCLC patients.

A total of 143 pairs of primary NSCLC and matched adjacent normal lung tissues were collected from patients who underwent surgery between 2017 and 2019 in Huashan Hospital, Fudan University. Written informed consents were signed before the research started. And this research was authorized by the Ethics Committee of Huashan Hospital, Fudan University. All procedures were carried out in accordance with the ethical guidelines of the Declaration of Helsinki. Three NSCLC cell lines (PC9, A549 and H1299) and normal human bronchial epithelial cells (16HBE) were obtained from the Cell Bank of the Chinese Academy of Sciences (Shanghai, China). All the cells were cultured in Dulbecco's Modified Eagle Medium (DMEM Gibco, USA) supplemented with 10% fetal bovine serum (FBS, Gibco, USA) and 1% penicillin-streptomycin (Invitrogen, USA) at 37 ºC. Cells were used when they were in the logarithmic growth phase.

The siRNAs targeting RPS9, and corresponding negative control siRNAs (si-NC) were designed and synthesized by Genechem (Shanghai, China). Plasmid used for transient transfection were designed and synthesized by Ribobio (Shanghai, China). Cells were plated at 60-70% confluence in a 6-well plate. Cell transfection was performed using Lipofectamine 2000 reagents (Invitrogen, USA). After transfection for 48 hours, the knockdown and overexpression efficiency were validated by both qRT-PCR and western blot.

For transwell migration assays, cells were resuspended in DMEM without FBS and 4 × 10^5 cells were seeded into the upper chamber of a 24-well insert (Corning Inc., USA) precoated with Matrigel. 800-µL DMEM supplemented with 10% FBS was placed in the lower chamber. After incubation for 24 hours, the invaded cells on the lower surface were fixed with methanol, stained with crystal violet and the number of invaded cells from five random fields was counted under a light microscope. For the invasion assay, 1 × 10^6 cells were seeded into the upper Matrigel invasion chambers (Corning BioCoat, USA), and the following procedures were carried out similarly as what was described in the transwell migration assays.

Cells were seeded into 96-well plates in triplicate and cell viability was detected by the Cell Counting Kit-8 (CCK-8) assay (Dojindo, Japan) according to the manufacturer's instructions. For colony formation assay, cells were plated in 6-well plates (1000 cells/well) and cultured for 14 days. After washed with phosphate-buffered saline (PBS) for three times, the colonies were fixed in methanol and subsequently stained with crystal violet for 30 min.

The results were presented as mean ± SEM (Standard error of mean). The unpaired two-tailed Student's t-test was used to compare the differences between two groups and the data were visualized by Graphpad prism version 8.0 software. All statistical analysis was conducted with SPSS version 22.0 software. A p-value less than 0.05 was considered statistically significant.

To examine the potential role of RPS9 in NSCLC tissue, we firstly analyzed RPS9 mRNA levels in NSCLC data from TCGA database via UALCAN, the results confirmed that RPS9 was highly expressed in primary adenocarcinoma samples compared with normal samples (Figure 1A). Kaplan-Meier plot survival analysis based on GEO database showed that overexpression of RPS9 was associated with poor outcomes in NSCLC patients (Figure 1B). Subsequently, a total of 141 pairs of primary NSCLC and matched adjacent normal tissues were collected to further clarify these results in NSCLC, finding that RPS9 was extremely overexpressed in most NSCLC tissues compared to normal controls (Figure 1C) and this phenomenon was determined in 68.1% of NSCLC cases (Figure 1D). Moreover, we carried out the qRT-PCR to test the RNA level of each sample and the results reveal that the expression level is positively correlated with advanced TNM stages (Figure 1F). However, no significant difference was observed between the expression level of RPS9 and age, gender, tumor size, differentiation, and metastasis (Table 1). Taken together, the results identify that RPS9 is up expressed in NSCLC tissues and overexpression of RPS9 indicates poor prognosis.

Relationship between RPS9 expression and clinicopathologic characteristics in 141 NSCLC patients. 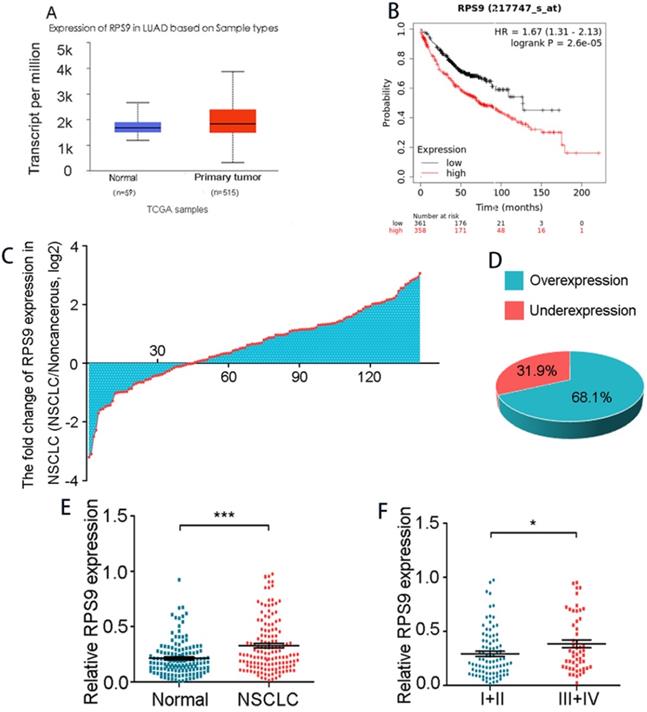 RPS9 is up regulated in NSCLC cell lines

To identify the biological function of RPS9 in NSCLC, we assessed the RPS9 expression levels in three NSCLC cell lines (PC9, A549 and H1299) and the normal human bronchial epithelial cells (16HBE) by qRT-PCR and immunoblotting analysis. As shown in Figure 2A and 2B, the expression of RPS9 was relatively higher in NSCLC PC9 and H1299 cell lines slightly higher in A549 cell lines than that in normal bronchial epithelial 16HBE cell line. Together, the data above identify that RPS9 is up expressed in NSCLC cell lines. 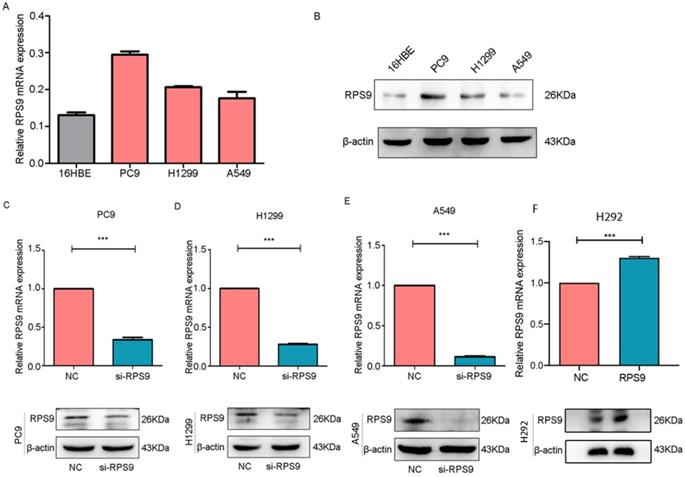 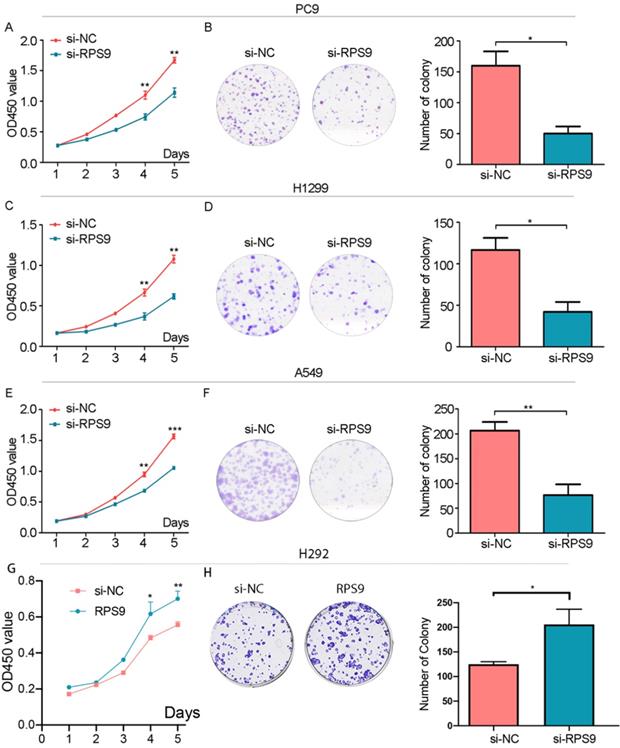 To further examine whether RPS9 affects cell apoptosis capacities of NSCLC, flow cytometry was also utilized to determine the percentage of cell apoptosis. As shown in Figure 6, the cell apoptosis rates of PC9, A549 and H1299 were obviously increased after RPS9 knockdown. Thus, RPS9 not only promotes growth and metastasis of NSCLC cells but also suppresses cell apoptosis. 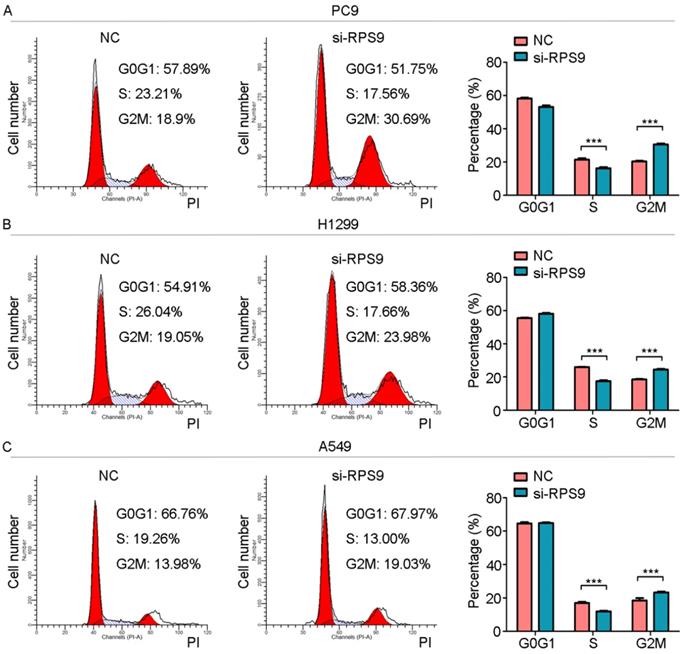 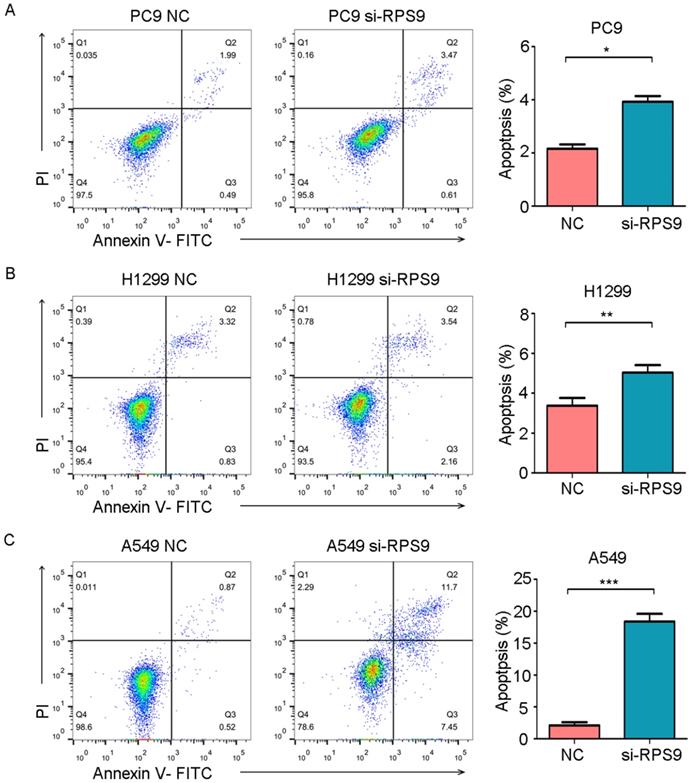 Reversely, we revealed that RPS9, as a member of ribosomal proteins, was significantly up regulated in NSCLC tissue samples compared to the corresponding non-cancerous tissues. In addition, high levels of RPS9 in NSCLC tissues are related to poor prognosis. In the present study, RPS9 knockdown suppressed tumor growth, metastasis and promoted cell apoptosis, which is consistent with the previous researches in osteosarcoma, glioma and cervical carcinoma [16]. Previously, RPS9 has been reported to have an oncogenic role in colorectal cancer, neuroblastoma cells and NSCLC [28-30]. Wenhan Yang et.al found that BRCAT54 directly bound to RPS9. Knockdown of RPS9 substantially reversed the promoting effects of si-BRCAT54 on cell proliferation and enhanced the inhibitive effect of si-BRCAT54 on BRCAT54 expression. In addition, silencing of RPS9 activated JAK-STAT pathway and suppressed calcium signaling pathway gene expressions[28]. What's more, RPS9 has aberrant promoter hypermethylation and was involved in colorectal tumorigenesis [29]. Other than that, knockdown of RPS9 induced G2/M arrest of colon cancer cells by downregulating CDK1 expression at the promoter level and dysregulation of RPS9 may be involved in microsatellite instability of colorectal cancer [31] [32]. 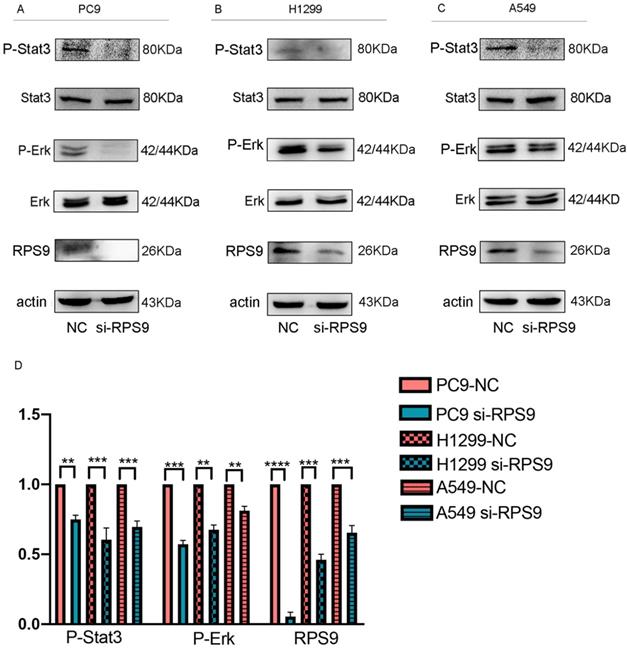 In NSCLC, it has been reported that RPS9 was involved in the activation of JAK-STAT and calcium signaling pathways. In the previous study, knockdown of RPS9 offset the promoting effects of si-BRCAT54 on cell proliferation and silencing of RPS9 activated JAK-STAT pathway and suppressed calcium signaling pathway gene expressions [28]. However, whether RPS9 accelerates the pathogenesis of NSCLC via any other mechanisms still needs to be explored. In this study, to further investigate the underlying mechanisms of RPS9 involved in NSCLC progression, antibody library including common phosphorylated protein related antibodies and their total protein antibodies was performed. We examined the total protein levels by western blot, and the results demonstrated that suppression of RPS9 inhibited the phosphorylation of Stat3 and Erk.

In conclusion, our findings exposed that RPS9 acted an oncogene in NSCLC via regulating the phosphorylation expression of Stat3 and Erk, promoting cell proliferation, migration, invasion, and inhibiting apoptosis in NSCLC. The role of RPS9 on the occurrence and metastasis of lung cancer needs more research. With the emergence of more studies, RPS9 may serve as an important marker for clinical prediction and diagnosis.

8. Lindstrom MS. Elucidation of motifs in ribosomal protein S9 that mediate its nucleolar localization and binding to NPM1/nucleophosmin. PLoS One. 2012;7:e52476