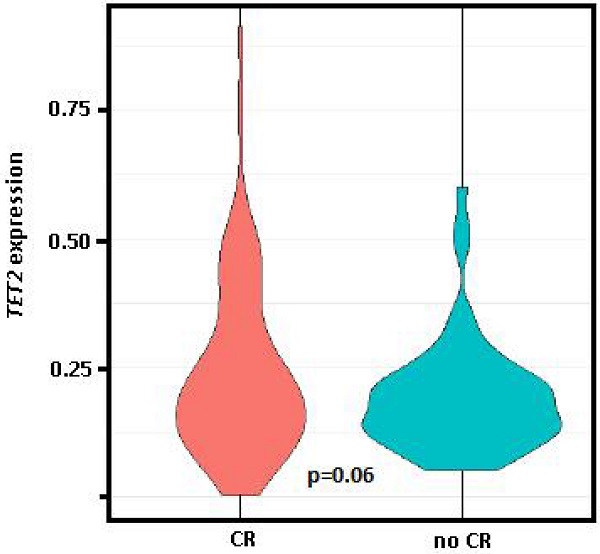 Recent advances in sequencing technologies and genomics have led to the development of several targeted therapies such as BCL2 and Bromodomain and extra-terminal (BET) protein inhibitors for a more personalized treatment of patients with acute myeloid leukemia (AML), yet the majority of patients still receive standard induction chemotherapy. The molecular profiles of patients who are likely to respond to induction therapy and novel directed therapies remain to be determined. The expression of AML-related genes that are targeted by novel therapies such as BCL2 and BRD4, as well as functionally related genes and associated epigenetic modulators (TET2, EZH2, ASXL1, MYC) were analyzed in a series of 176 consecutive AML patients at multiple points during the disease course - diagnosis (Dx), post-induction (PI), complete remission (CR) and relapse (RL) - and their relationship with clinical variables and outcome investigated. Higher TET2 expression was observed PI and at CR compared to Dx, with significantly superior TET2 expression after induction therapy in the group of patients who reached CR compared to those who did not. Thus, the upregulation of TET2 at PI may be a marker of CR in AML patients. On the other hand, cells with high levels of MYC and BCL2 may be vulnerable to BRD4 inhibition.

Acute myeloid leukemia (AML) is one of the most common leukemias, accounting for 30% of adult cases, with a median age of presentation of 68 years [1]. Although AML is a highly heterogenous disease, the vast majority of patients still receive standard induction chemotherapy (anthracycline + cytarabine, “7+3”). However, approximately 65%-70% of patients aged 60 and under [2] and just 30%-60% of the over-60s obtain complete remission (CR) [3, 4], with failure to achieve CR associated with a very poor outcome [5]. As a result, current outcomes for AML patients remain unsatisfactory: those aged 60 years and under have a long-term disease-free survival (DFS) of only 40%, whereas the DFS of older patients is 10% or less, with a median overall survival of less than one year, regardless of therapeutic approach [6, 7].

Recent progress in the use of massive sequencing technologies has led to a greater understanding of the disease pathology. This knowledge has in turn fueled the development of targeted therapies, such as those developed against FLT3 and IDH1/2 mutations [8]. BCL2 inhibitors (venetoclax was approved by the FDA on November 21, 2018, in combination with azacitidine or decitabine or low-dose cytarabine for the treatment of newly-diagnosed AML in adults aged 75 years or older [9]) and Bromodomain and extra-terminal (BET) protein inhibitors (showing promising results in recent clinical trials [10]), both of which induce apoptosis, are also offering hope for AML patients.

Nevertheless, the molecular profiles of patients who are likely to respond to these novel targeted therapies remain to be determined. Moreover, algorithms to predict which patients are unlikely to respond well to the standard induction regime, and thus could benefit from an alternative therapy, do not exist and represent an unmet clinical need. Therefore, there is still much work to be done in personalizing the risk stratification and treatment regimes of AML patients in the clinic.

In this study, we determined the expression of AML-related genes that are targeted by novel therapies in AML such as BCL2 and BRD4, as well as functionally related genes and associated epigenetic modulators (TET2, EZH2, ASXL1, MYC) in a series of patients with AML at diagnosis and at different points during follow-up and evaluated whether their expression was predictive of complete remission after induction and/or patient outcome.

Bone marrow (BM) and peripheral blood (PB) samples were collected at diagnosis (Dx), post-induction (PI, which corresponded to the BM evaluation at day 21 after induction therapy), complete remission (CR, defined as <5% blasts in bone marrow, absence of extramedullary disease, neutrophils ≥1.0 × 109/L and platelets ≥100 × 109/L, according to the 2017 ELN recommendations [11]) and at relapse (RL).

Pearson correlation coefficients were used to calculate correlations between two continuous variables. For the comparison between continuous variables, paired Student's t-test for parametric data or Wilcoxon signed-rank test for non-parametric variables was used. Univariate and multivariate survival analyses were carried out using the Cox proportional hazard model only for patients who received first-line intensive treatment (anthracycline + cytarabine, 7 + 3 schedule). Progression-free survival was defined as the time from diagnosis to disease progression or death from any cause (PFS). All statistical analyses were two-sided, with statistical significance was set at a p-value < 0.05. Analyses were carried out using the R Core Team 2019 (version 3.6.1).

Informed consent was provided by all patients and donors. The datasets from this study are available from the corresponding author on reasonable request.

Average expression levels of study genes at different timepoints during follow up. Normalized expression shown at diagnosis (Dx), post-induction (PI), complete remission (CR) and relapse (RL). Values were normalized to the ABL1 reference gene and relative to a pool of healthy donors. 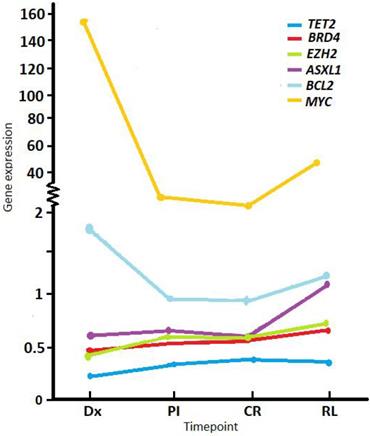 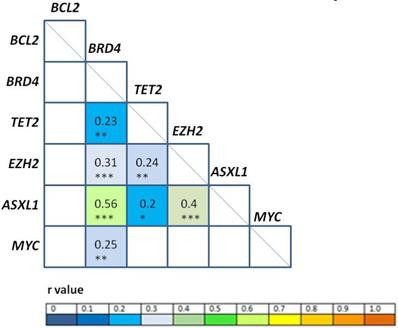 Comparison of average gene expression levels at different timepoints during follow up. Values were normalized to the ABL1 reference gene and relative to a pool of healthy donors (expression level set as 1 for each gene)

Significant differences are shown in bold.

Violin plot of TET2 expression at diagnosis. Comparison of the group who achieved complete remission (CR) after induction therapy vs. those with persistence and/or exitus (no CR). Student t test (parametric) used for distinct distributions, p=0.06. 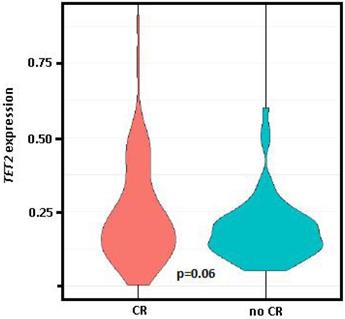 In terms of clinical variables, no association was found between expression of the genes analyzed at diagnosis with patient age, or leukocyte, hemoglobin, creatinine or lactate dehydrogenase (LDH) levels. However, a significant inverse correlation was observed between blasts in PB and expression of BRD4 (r = -0.26, p= 0.01), EZH2 (r = -0.27, p = 0.01) and ASXL1 (r = -0.2, p = 0.04) at diagnosis (Supplementary Table 2).

Univariate and multivariate analysis for overall survival for the whole series. Average expression levels for the group of survivors and non-survivors are included for genes whose expression at certain timepoints was significant (or of borderline significance)

Univariate analysis for progression-free survival for the whole series. Significant differences are shown in bold

Median PFS in our series was 12.5 months. Univariate analysis revealed no association between gene expression levels at diagnosis or at relapse. However, the gene expression levels of ASXL1 and BCL2 at PI (albeit of marginal significance, p = 0.073 and 0.06, respectively) and of ASXL1, BCL2 and EZH2 at CR (p = 0.016, 0.022, 0.019, respectively) were associated with PFS (Table 3).

In this expression study, BCL2 was the only gene to show a significant increase in expression at relapse compared to PI and CR [12]. Early studies showed that overexpression of BCL2 is a common event in AML and that high levels are associated with chemoresistance and low complete remission rate [15-17]. Further papers demonstrated that it is the readiness for apoptosis of myeloblasts, known as “priming”, rather than the monogenic expression of a single apoptosis-related gene at diagnosis (i.e. BAX, BLC2), that determines a successful response to chemotherapy [18, 19].

Relapsed AML cases have a particularly poor prognosis due to limited treatment options for refractory cases. As the sensitivity to the selective BCL-2 inhibitor ABT-199 seems to correlate with BCL2 levels [20], it is possible that BCL2 expression at PI, at CR and even at relapse, may determine candidates for venetoclax as an alternative treatment.

Although no association was observed between gene expression levels at diagnosis and OS or PFS, expression levels of ASXL1 and BCL2 at PI and of EZH2, ASXL1, BCL2 and MYC at CR were associated with OS, while EZH2, ASXL1 and BCL2 levels at CR were associated with PFS. Assessment of post-treatment remission is currently primarily based on cytomorphology, with CR defined as <5% blasts in the bone marrow [11], but this does not mean that the patient is free of disease. In fact, the consensus among experts is to evaluate for the presence of measurable residual disease (MRD), defined as post-therapy persistence of leukemic cells at levels below morphologic detection, since it is a strong, independent prognostic marker of increased risk of relapse and shorter survival [22]. Our results suggest that gene expression at PI/CR has a significant influence on patient outcome. Therefore, expression analysis of a set of just six genes could help refine the risk stratification of patients who achieve CR in response to standard induction therapy to better predict patient survival and identify patients likely to require an alternative treatment approach. Unlike other multi-gene prediction scores (such as the 17- or 29-gene scores [23, 24]), our RT-qPCR strategy is simple, cost-efficient and easily applicable in most hematology laboratories.

As expected, we observed that the expression levels at diagnosis of genes with a tumor suppressor function in AML (TET2, EZH2 and ASXL1) were low compared to normal bone marrow, whereas levels at diagnosis of genes with an oncogenic role (BCL2 and MYC) were higher in a series of 176 AML patients. TET2 levels were the lowest with regard to normal bone marrow, in agreement with what has already been described in AML [14].

We observed a very positive correlation between ASXL1 and EZH2 expression at diagnosis, PI and relapse, which may correspond to their cooperative functions in relation to the H3K27me3 epigenetic mark [25]. In addition, there was a correlation between EZH2/ASXL1 and TET2 levels at diagnosis that could be explained by the described collaborative role of the malfunction of ASXL1 and TET2 in promoting the commitment of hematopoietic cells to the myeloid lineage in myeloid pathogenesis [26]. The association found between BRD4 and MYC agrees with the biological activating function of BRD4 over MYC expression [27]. Finally, BRD4 expression also correlated with EZH2/ASXL1/TET2; accordingly, it has been published that BRD4 regulates EZH2 transcription through the upregulation of MYC [27] and binds directly to enhancer sites in the EZH2, MYC and BCL2 genes [28]. Therefore, there is biological concordance with our results of observed mRNA expression levels at diagnosis. These correlations may also be important to take into account when considering combination therapies.

Moreover, although significant associations were observed between BRD4 and MYC levels but not between BRD4 and BCL2 levels, the expression of BCL2 and MYC, both downstream targets of BRD4 [28, 29], were significantly lower after induction and at CR compared to diagnosis. Interestingly, studies have shown that the treatment of AML cells with the selective small-molecule bromodomain inhibitor JQ1 caused the rapid downregulation of BCL2 and MYC transcription, followed by genome-wide downregulation of Myc-dependent target genes [27, 29]. Therefore, cells with high levels of MYC and BCL2 may be vulnerable to BRD4 inhibition. Moreover, combination treatment with BET inhibitors and venetoclax has recently been reported to be more effective in inducing lethal effects against AML blasts, without inducing toxicity, in AML engrafted mice [30].

In conclusion, gene expression at PI/CR has a significant influence on patient outcome. Our findings support the upregulation of TET2 and the downregulation of BCL2 and MYC at post-induction as potential follow-up targetable markers in AML. However, further analyses in a larger AML series are needed to confirm that expression analysis of a set of just six genes could help refine the risk stratification of patients who achieve complete remission in response to standard induction therapy and to establish which patients are likely to benefit from therapy with BCL2 and/or BRD4 inhibitors.

This work was supported by the Fundación DISA (OA 15/005), and the Ministry of Economy and Competitiveness ISCIII‐FIS (PI14/02220).

The raw data will be made available upon reasonable request.

3. Baudard M, Beauchamp-Nicoud A, Delmer A. et al. Has the prognosis of adult patients with acute myeloid leukemia improved over years? A single institution experience of 784 consecutive patients over a 16-year period. Leukemia. 1999;13:1481-90