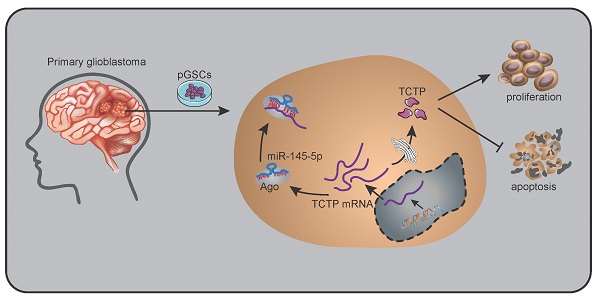 Glioma stem cells (GSCs) have potential for proliferation, self-renewal, and differentiation-the properties that play decisive roles in the process of malignancy in glioma. MicroRNAs (miRNAs) have been shown to regulate the characteristics of cancer stem cells. In this study, we show that miR-145-5p, a recently discovered miRNA, is expressed at low levels in primary GSCs (pGSCs). Upregulation of miR-145-5p resulted in the inhibition of proliferation and increased apoptosis of pGSCs. Furthermore, its overexpression resulted in reduced expression of translationally controlled tumor protein (TCTP). Bioinformatics analysis and luciferase targeting assay revealed that miR-145-5p exerts its effects by directly targeting TCTP. The expression of TCTP was significantly upregulated in pGSCs, and its silencing suppressed the proliferation and increased the apoptosis of pGSCs. Moreover, upregulation of TCTP attenuated the effect of miR-145-5p overexpression on the viability and apoptosis of pGSCs. The results of in vitro studies were corroborated in vivo using an orthotopic mouse model. Taken together, these results suggest that miR-145-5p could be a novel therapeutic target for gliomas through the suppression of TCTP in GSCs.