Pancreatic ductal adenocarcinoma (PDAC) is a highly malignant tumour with a poor prognosis and a high mortality rate. It is of great significance to explore sensitive or specific biomarkers for early diagnosis and prognosis. We first examined the metabolome and gut microbiota of resectable and unresectable PDAC patients to comprehensively investigate the characteristics of PDAC at different stages of progression. At the genus level, we found that the relative abundances of Alistipes, Anaerostipes, Faecalibacterium and Parvimonas were reduced in unresectable PDAC patients, whereas Pseudonocardia, Cloacibacterium, Mucispirillum, and Anaerotruncus were increased. Metabolomics analysis showed that the main changed metabolites were amino acids, carnitine derivatives, lipids and fatty acids. ROC analysis showed that Oleic acid, Linoleic acid, Palmitic acid, Linoelaidyl carnitine, 2-Octenedioic acid, 3R, 7R-1,3,7-Octanetriol, LysoPE (P-16:0/0:0) and 3-Hydroxyanthranilic acid had high AUC values (>0.9). Function and network analyses showed that these altered metabolites correlated with NF-kappa B signalling, the FXR/RXR pathway, mitochondrial dysfunction, mTOR signalling and IL-6 signalling. In particular, the abundance of Palmitic acid, Oleic acid, Linoelaidyl carnitine and 2-Octenedioic acid positively correlated with g_Anaerostipes, g_Alistipes, s_indistinctus, s_catus and s_formicigenerans but negatively correlated with g_Cloacibacterium, s_reuteri and s_hathewayi. Meanwhile,We also found that s_catus, s_ formicigenerans, s_ hathewayi, g_ Alistipes, g_ Anaerostipes, PE (22:6 (4Z, 7z, 10z, 13z, 16Z, 19Z)/p-18:1 (11z)), (3R, 7R) - 1,3,7-octanetriol and linoelaidyl carnitine were positively correlated with the survival time of patients.These findings may be helpful for the differentiation of resectable and unresectable PDAC based on changes in intestinal flora and metabolites at different stages of PDAC. This study also provides a strategy for preventing the deterioration of PDAC by regulating the gut microbiota and metabolism.

Pancreatic duct adenocarcinoma (PDAC) is one of the most malignant tumours. According to data from the American Cancer Society in 2020, the death rate of pancreatic cancer in the United States ranks third among malignant tumours and second among digestive system tumours[1]. Statistics from the China National Cancer Center also showed that the incidence of PDAC was the ninth highest among malignant tumours in China, and the mortality rate was sixth, with a very poor prognosis[2]. However, in contrast to the high mortality rate, pancreatic cancer has a low survival rate, With a 5-year survival rate of less than 10%[1]1. The main reason for this is that the rate of radical operation is too low. At present, less than 20% of patients with primary pancreatic cancer can be operated on[3]. It has been reported that the median survival time of patients with resectable pancreatic cancer after adjuvant chemotherapy is between 20.1 and 28.0 months, while the median survival time (MST) of patients with locally advanced and metastatic pancreatic cancer after treatment with folfirinox and gemcitabine plus nab-paclitaxel is only 8.5 to 11.1 months[4,5]. There was a significant difference in survival benefit between patients who could and could not undergo operation. Thus, in recent years, clinical studies have been trying to improve the resectability of locally advanced and partially metastatic pancreatic cancer through new treatment. However, patients who were originally classified as borderline resectable pancreatic cancer have been treated with neoadjuvant chemotherapy to improve the R0 resection. Therefore, the early detection and diagnosis of pancreatic cancer is very important to improve the radical operation rate.

Resectable (n=36) and unresectable PDAC (n=36) patients were recruited from the the department of Hepatobiliary Pancreatic Surgery, Changhai Hospital Affiliated with Navy Medical University and Yueyang Hospital of Traditional Chinese and Western Medicine Affiliated to Shanghai University of Traditional Chinese Medicine. All the patients recruited for the study have provided written informed consent for use of patient samples and data. All patients were confirmed as pancreatic ductal adenocarcinoma by pathological examination. The histopathological results of resectable PDAC patients were obtained after operation. Unresectable PDAC patients obtained pathological examination by endoscopic ultrasound-guided fine needle aspiration (EUS-FNA). All patients were examined by thin-section computed tomography and magnetic resonance imaging of the abdomen before admission, and blood biochemical parameters and tumour markers were detected. All patients were further subjected to multidisciplinary discussions to plan the optimal treatment strategy. The inclusion criteria were as follows: age ranged from 50-80 years old; primary-care patients without any treatment; had quit smoking and drinking alcohol for more than half a year; did not take antibiotics in the past month. The exclusion criteria were as follows: other basic diseases, such as patients with a history of diabetes were excluded, hypertension, arthritis, heart disease, chronic hepatitis, gallstone, Alzheimer's disease; unclear medication history; those who could not fully cooperate with baseline data collection. All patients were diagnosed with pancreatic cancer for the first time. Blood was gained from all the patients though vein with fasting abdomen in the morning.

DNA was extracted from frozen faecal matter (200 mg) with a PowerFecal DNA Isolation Kit (cat: 12830-50, QIAGEN-MOBIO) according to the HMP (Human Microbiome Project) guidelines. PCR amplification of 16S rDNA involved thirty-five PCR cycles (95 ℃, 35 s, 55 ℃ for 35 s and 72 ℃ for 1 min). The forward primer is 5'-AGAGTTTGATCCTGGCTCAG-3', and the reverse primer is 5'-AGAGTTTGATCCTGGCTCAG-3'. The successful amplification product was verified by agarose gel electrophoresis, and DNA libraries were constructed according to the manufacturer's instructions of KAPA Library Quantification kits and LabChip GX HT DNA High Sensitivity Kit (Waltham, MA, USA). Sequencing was performed on the Illumina MiSeq platform.

The raw data were converted to mzdata with MassHunter Workstation Quantitative Analysis B.08. R software 3.6.3, and the XCMS package was used for peak extraction, peak alignment, peak matching, and finally to generate an ion list containing the retention time and mass to charge ratio (m/z) values. After normalization, the table list of ions was imported into SIMCA-P 13.0 and UV-scaled for multivariate statistical analysis. First, Principal Component Analysis (PCA), an unsupervised method of analysis, was used to show the differences in metabolic status between the two groups. Then, Partial least squares discriminant analysis (PLS-DA), a supervised analysis method, was used to screen the differentially expressed metabolites. Finally, the different metabolites were selected with p < 0.05, VIP >1 and fold change (FC > 1.2). The differential metabolites were identified by comparing exact masses with metabolite databases, including HMDB and METLIN. Then, MS/MS spectra were used to confirm the metabolites structure. Finally, the retention time MS/MS spectra were compared with standard compounds obtained from Sigma-Aldrich to confirm the metabolite structures, followed by metabolic pathway or function analysis using the KEGG and HMDB databases. Correlation analysis of different metabolites and different bacteria used Pearson correlation analysis based on R software (http://www.r-project.org). The Pearson correlation coefficients were generated and declared significant at p < 0.05.

The original data were processed by dejoining and low-quality filtering, and chimeric sequences were removed. After clean data were obtained, cluster analysis was carried out with QIIME (version 1.9.1), and Operational Taxonomic Units (OTUs) were acquired. The representative sequences of each OUT were annotated and aligned to obtain the corresponding species information and species abundance distributions. At the same time, the abundance, alpha diversity, Venn map and petal map of OTUs were analysed to obtain species richness and evenness information using the QIIME software package.

Clinical Characteristics of the included patients

Diversity and Relative Abundance of Taxa

The two groups did not show differences in the Chao index, a measure of within-sample (α) phylogenetic diversity (Figure S1). The top 15 species by average abundance are shown in Figure S2, and the differential bacteria, at the level of order, family, genus and species, are shown in Table 3. At the genus level, the relative abundances of Alistipes, Anaerostipes, Faecalibacterium, and Parvimonas were reduced in unresectable PDAC patients (p < 0.05), and Pseudonocardia, Cloacibacterium, Mucispirillum, and Anaerotruncus were increased (Fig 5).

The clinical characteristics of unresectable and resectable PDAC patients.

Correlation between the gut microbiome and metabolites 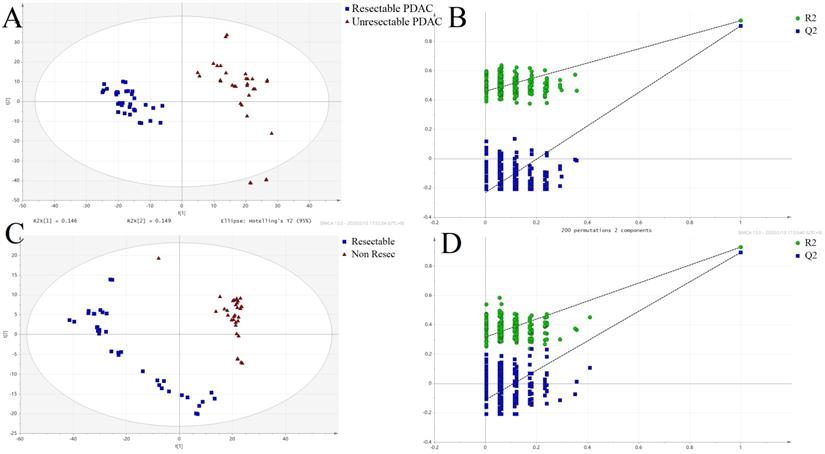 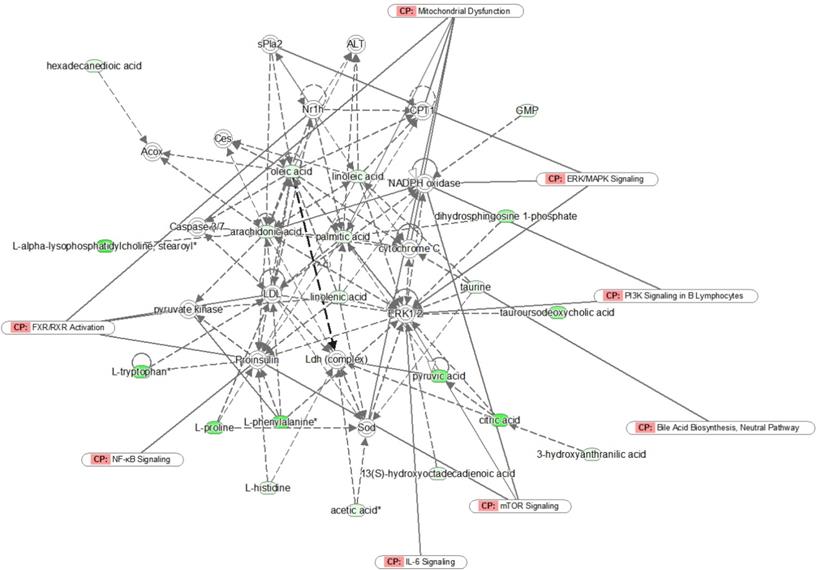 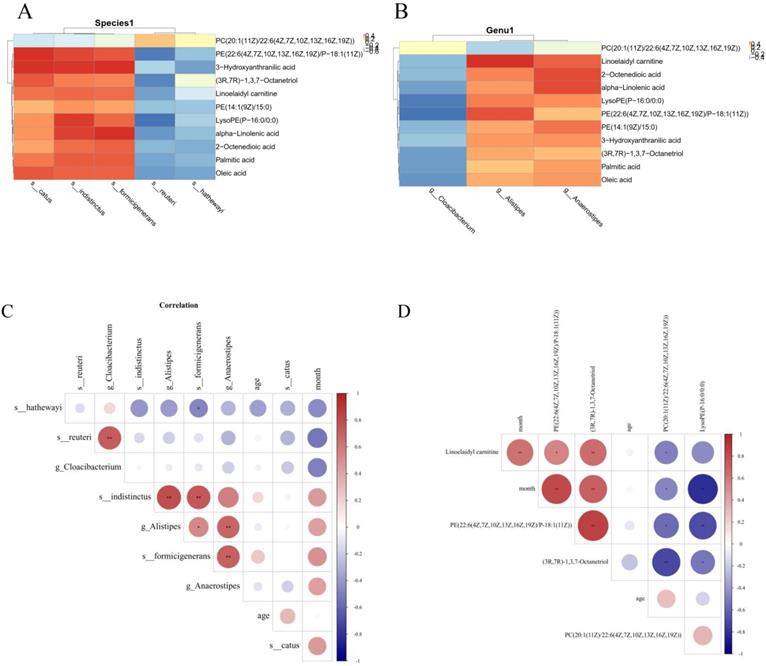 Information of differentially expressed bacteria at the level of order, family, genus and species.

Radical resection is the most effective treatment for pancreatic cancer. However, more than 80% of pancreatic cancer patients do not have the option of operation due to late diagnosis. Therefore, it is of great significance to explore sensitive or specific biomarkers for early diagnosis and prognosis. The development of High-Throughput Sequencing technology and Metabonomics has provided the possibility for this exploration. The occurrence and development of pancreatic cancer are bound to be accompanied by changes in the flora and metabolites in the body. Mouse models have been used to observe early and late pancreatic intraepithelial neoplasia to simulate the malignant progress of PDAC in human disease. It has been found that serum citrate levels increase in late pancreatic intraepithelial neoplasia[13], and the concentrations of carnitines, such as C5 acyl carnitine and propionyl carnitine, are negatively correlated with the progression of pancreatic cancer [14]. Studies have also found some microbes in the tumour tissue related to the survival of unresectable PDAC patients[15]. These findings suggest that the monitoring of metabolites and microorganisms may provide valuable clues for the development and prognosis of pancreatic cancer. It can be concluded that resectable pancreatic cancer and locally advanced and metastatic pancreatic cancer are different stages of disease development, with different survival and prognosis. We first used metabonomics and 16SrDNA to characterize resectable and unresectable PDAC to more comprehensively understand the physiological state of patients in these two stages and to identify screening markers that can be used to judge the disease prognosis. This type of data is very meaningful for the early detection and intervention of PDAC.

Tryptophan is an essential amino acid that plays an important role in protein biosynthesis and metabolic network regulation. Tryptophan is mainly metabolized through the following pathways: canine urinary ammonia, 5-hydroxytryptamine pathway and bacterial degradation. Most tryptophan (95%) is metabolized into a series of downstream products through the kynurenine pathway[28]. This pathway is involved in inflammation and immune function through the consumption of tryptophan and the immunoregulation of downstream products[29]. Our results showed that the level of tryptophan in unresectable PDAC was significantly lower than that in resectable PDAC. IDO is the rate limiting enzyme responsible for tryptophan degradation. Research has shown that IDO is highly expressed in pancreatic cancer tissues, especially in tissues with lymph node metastasis and low differentiation[30]. As a result, the level of tryptophan in serum is reduced. The above studies showed that the uric acid metabolic pathway consumed by tryptophan increased significantly in pancreatic cancer and was related to its progression and invasiveness. Therefore, the kynurenine pathway is a significant therapeutic target[31].

In conclusion, this study first examined the metabolic and microbiome differences between resectable and unresectable PDAC patients. and discussed the correlation between specific gut microbiota, specific metabolome and the survival time of patients.These findings may assist in distinguishing resectable and unresectable PDAC patients based on changes of potential biomarkers. The data also provide a strategy for preventing the deterioration of PDAC by regulating the gut microbiota and metabolism.

This work was supported by grants from the Special project for the construction of TCM specialty in Yueyang Hospital of Integrated Traditional Chinese (No.YWC-ZK2020-003) and Western Medicine and The Precision Medicine and Translational Application Special Research of the Second Military Medical University.

26. Battal B, Akgun V, Karaman B. Value of 3T 1H-magnetic resonance spectroscopy in the differentiation of benign and malignant breast tumors. Acta Radiol. 2014;55:416-417