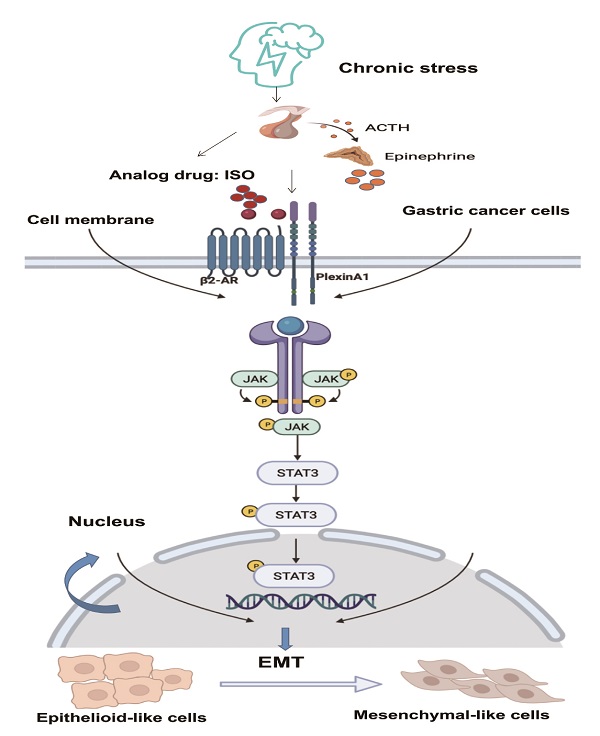 With the medical model shifting from a single biomedical model to a biopsychological-social model, the impact of psychosocial factors on cancer patients has attracted attention. Studies have shown that chronic stress caused by long-term psychological stress, such as anxiety and depression, can promote the malignant progression of tumors by acting on β2-adrenergic receptor (β2-AR). β2-AR can promote tumor migration by activating epithelial-mesenchymal transition (EMT). However, the underlying mechanisms in the regulation of EMT by β2-AR are still unclear. In this study, we established a chronic stress model by treating MGC-803 and SGC-7901 human gastric cancer cells with isoproterenol (ISO), a β2-AR agonist. EMT in the two gastric cancer cell lines was enhanced after ISO treatment. Thereafter, we found that the interaction between β2-AR and PlexinA1 was involved in the process by which chronic stress affects EMT in both MGC-803 and SGC-7901 cells. Moreover, the activation of β2-AR by ISO increased the expression of PlexinA1, activated JAK-STAT3 signaling and further promoted EMT in human gastric cancer cells. Importantly, the knockdown of PlexinA1 by small hairpin RNAs inhibited JAK-STAT3 signaling and abolished the EMT induced by β2-AR. In conclusion, PlexinA1 was an important downstream target of β2-AR, through which β2-AR promoted EMT in human gastric cancer cells by activating JAK-STAT3 signaling.