Background: The present study was designed to examine the prognostic value of a systemic inflammation marker-BAN score, which was established based on body-mass-index (BMI), albumin (ALB) and neutrophil-lymphocyte ratio (NLR) in resectable esophageal squamous cell carcinoma (ESCC) patients.

Methods: A total of 420 newly diagnosed ESCC patients in our hospital between January 2008 and December 2013 were included. Their baseline characteristics were retrospectively reviewed and collected. BAN score was calculated as (BMI × ALB/ NLR). The optimal cutoff value for BAN score was defined as 28.0 in terms of survival. Patients were then allocated to high BAN (≥ 28.0) and low BAN (< 28.0) score groups.

Esophageal cancer (EC) is one of the most commonly seen malignancies and the fourth leading cause of cancer-related death in China [1]. Unlike Western countries, more than 90% of EC cases are classified as esophageal squamous cell carcinoma (ESCC) in Chinese population [1-3]. And approximately two thirds of the patients are diagnosed with advanced or metastatic diseases at first presentation. Although great advances have been achieved in early screening, diagnosis and treatment for the last two decades, ESCC remains one of the most deadliest malignant diseases, with a reported 5-year survival rate of about 30% [1].

Recently, several systemic inflammation-based prognostic variables such as modified Glasgow prognostic score (GPS), hypoalbuminaemia, neutrophil-lymphocyte ratio (NLR) and platelet-lymphocyte ratio (PLR) [8-10] have been established to help risk classification and optimal treatment for ESCC. On the one hand, hypoalbuminemia has been suggested not only as an indicator of poor nutritional condition but also significantly correlated with chronic inflammation in cancer patients [11], and it could also predict worse survival for ESCC cases [12-13]. On the other hand, as a novel and promising blood marker of systemic inflammation response, an elevated NLR has been shown to be associated with a higher risk of postoperative recurrence and poor prognosis in various malignancies, including ESCC [14-15]. Most recently, Arigami T, et al. found that preoperative NLR was a valuable indicator for predicting disease progression and prognosis in ESCC subjects who received esophagectomy with lymphadenectomy [16]. Furthermore, Sun and his colleagues suggested that BMI could be used as a prominent marker for evaluation of nutritional status and a low BMI was an independent indicator for unfavorable OS in Chinese patients with ESCC [17].

Therefore, we proposed a novel and promising inflammation index-BAN score based on a combination of patient's BMI, ALB and NLR to reflect the degree of systemic inflammation response in resectable ESCC. However, its clinical significance has not yet been determined. The purpose of this study was to examine if pretreatment BAN score could predict long-term survival in patients with operable ESCC.

A cohort of 420 newly and histopathologically diagnosed ESCC patients who underwent esophagectomy with lymphadenectomy at the Department of Thoracic Surgery, the First Affiliated Hospital of Anhui Medical University between January 2008 and December 2015 were selected in the present study. Patients who were diagnosed with malignancies other than ESCC, who received neoadjuvant chemotherapy and/or radiotherapy and those who were diagnosed with autoimmune disorder or infection were excluded. This study was approved by the independent ethics committees at our hospital and was performed in accordance with the ethical standards of the World Medical Association Declaration of Helsinki in 1995 (as revised in Edinburgh 2000). Informed consent was obtained from all included subjects and patient anonymity was preserved. Disease free survival (DFS) was calculated from the date of surgery to local recurrence/distant metastasis, OS was defined as the time interval from the date of diagnosis to death or to the most recent follow-up.

All patients underwent transthoracic esophagectomy with at least a two-field regional lymphadenectomy, including standard, extended, or total dissection of the cervical, thoracic and abdominal lymph nodes, with a median number of dissected lymph nodes of 19 (range, 12-89). Adjuvant chemotherapy or radiotherapy was delivered based on the tumor stage, doctor's selection and patient's treatment desire. Actually, a total of 73 patients received adjuvant chemotherapy, with the aim to decrease the rate of local recurrence and/or distant metastasis. Fluorouracil-based two-drug combination chemotherapy was delivered to four-fifths of the cases, whereas the remaining subjects underwent fluorouracil monotherapy.

Patients' baseline information, such as age, gender, weight, height, etc. were retrospectively reviewed and collected from the medical records. Patients were staged based on the AJCC/UICC TNM staging system (the 8th edition). The length of primary tumor and the degree of differentiation were also classified accordingly.

BAN score was defined as follows:

In this study, the optimal cutoff value for BAN score was determined with the method established by Jan Budczieset al. at http://molpath.charite.de/cutoff/ [18]. Thus, BAN score was classified as low (< 28.0) and high (≥ 28.0) groups in the subsequent analysis.

The difference of baseline characteristics was examined by Chi-square test. Kaplan-Meier method with log-rank test was utilized to estimate survival curves. Prognostic factors were determined by univariate and multivariate analysis with Cox proportional hazards regression models and hazard ratios (HRs) for variables respecting to DFS and OS were also calculated. HRs with 95% confidence intervals (CIs) and two-sided P value were reported. All statistical analysis was carried out with SPSS 21.0 (SPSS Inc., Chicago, IL, USA). And a two-sided P value of less than 0.05 was considered to be with statistical significance. 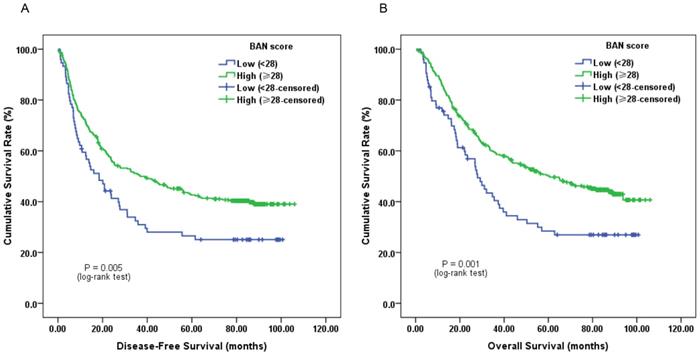 Furthermore, subgroup analysis classified by depth of invasion and lymph node status indicated that low pretreatment BAN score was significantly associated with worse DFS (Figure 2C, 3A and 3C; P < 0.05) and OS (Figure 2D, 3B and 3D; P < 0.05) in certain cases, but not DFS in T1-2 stage ESCC subjects (Figure 2A and 2B; P > 0.05).

Systemic inflammation response has been identified to be involved in the development, progression and distant metastasis, and associated with unfavorable survival in a broad range of malignant diseases, including ESCC [4-7]. To the best of our knowledge, this study revealed for the first time that patients with low pretreatment BAN score had more advanced and progressive diseases, and were significantly correlated with worse prognosis. The present study shed light on the importance of evaluating systemic inflammation response in ESCC patients as a prognostic marker. 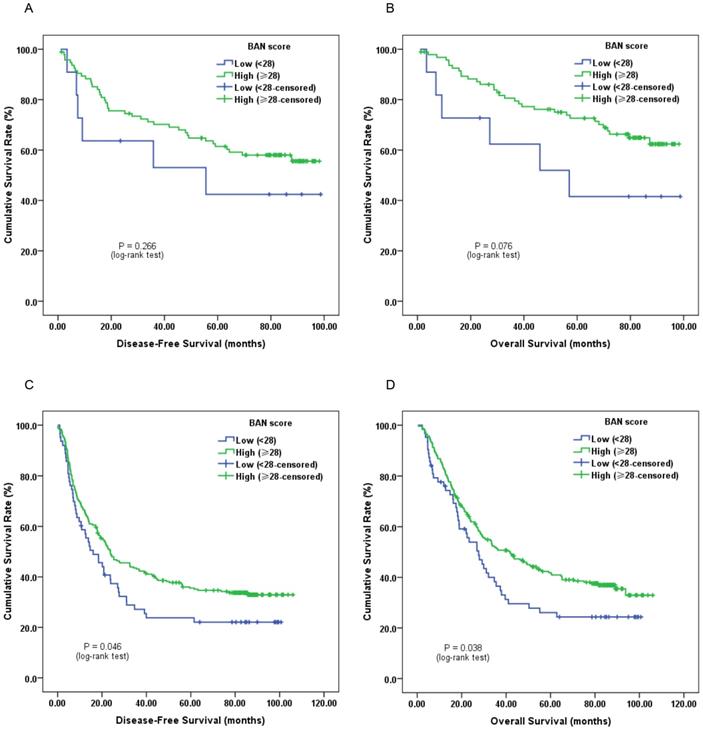 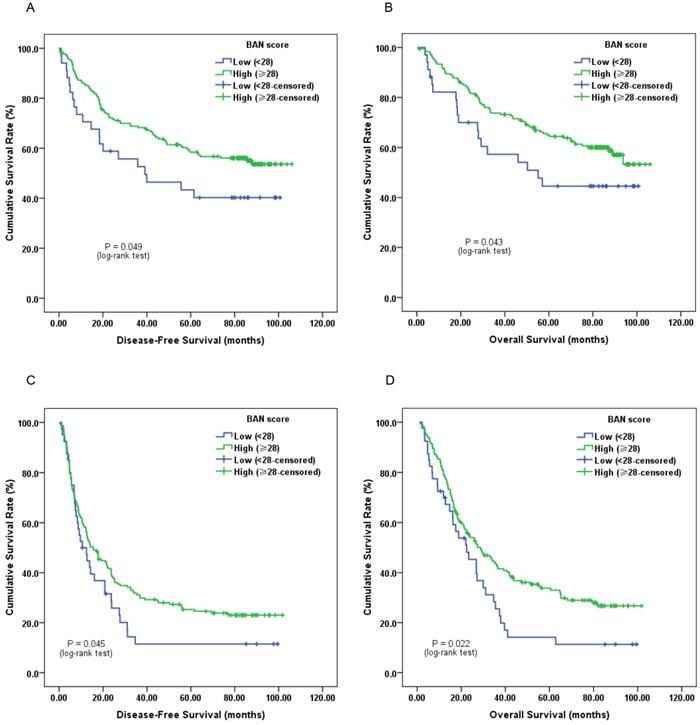 Clinically, serum CRP, white blood cell, neutrophil and lymphocyte counts are the most commonly measured parameters to evaluate the degree of systemic inflammation response in cancer patients [7]. Besides, hypoalbuminemia is also recognized to play vital roles in systemic inflammatory response [11]. Moreover, combinations of such variables have been proposed to establish several inflammation-based prognostic formulas.

On the one hand, the modified GPS is determined based on serum CRP and albumin concentrations, and is widely used as a valuable and promising prognostic marker in various malignancies, including ESCC [19-22]. However, Tian et al. failed to identify modified GPS as an independent prognostic indicator in 260 ESCC patients who received transthoracic esophagectomy [22]. Neither did Arigami et al. found its independent prognostic significance in 238 ESCC subjects who underwent esophagectomy with lymphadenectomy [16]. On the other hand, the NLR, a marker of systemic inflammation has also been found to predict unfavorable survival in cases with different cancers including ESCC [14-15]. Results from Chen MF' study showed that an elevated pretreatment NLR was significantly associated with advanced-stage disease and impaired OS in 926 ESCC patients who underwent concomitant chemoradiotherapy, but not in the 242 subjects treated with surgical intervention [15]. Recently, Arigami T and his colleagues suggested that NLR could serve as a valuable indicator for predicting disease progression and prognosis in patients with ESCC who received esophagectomy with lymphadenectomy [16].

Although the main limitations of this study were the retrospective and single institution design, the findings suggested that pretreatment BAN score could significantly predict long-term survival, help risk stratification more accurately and design optimal therapeutic strategies for resectable ESCC.

This study was supported by grants from 2021 Anhui Natural Science Foundation (NO. 2108085QH345) and 2018 In-House Youth Development Program of the First Affiliated Hospital of Anhui Medical University (NO. 2877).

10. Paramanathan A, Saxena A, Morris DL. A systematic review and meta-analysis on the impact of pre-operative neutrophil lymphocyte ratio on long term outcomes after curative intent resection of solid tumours. Surg Oncol. 2014;23:31-9