Background: Elderly patients with stage I gastric cancer, a disease that is curable by surgery, easily develop long-term postoperative pneumonia (LTPP) within two years after surgery despite showing no active symptoms. The present study assessed whether or not LTPP determines the later prognosis among elderly patients.

Methods: We retrospectively examined patients >75 years old who underwent R0 gastrectomy for gastric cancer and were diagnosed with T1 disease at National Cancer Center Hospital between 2005 and 2012. LTPP was evaluated by chest computed tomography every year until two years after surgery.

Results: Of the 3412 patients who underwent gastrectomy in our hospital during this period, 159 were included in this study. The elderly patients who developed LTPP had a worse prognosis than those who did not. Furthermore, their comorbidities and LTPP were significant independent risk factors for a poor prognosis. Patients who developed LTPP had a significantly higher risk of dying due to respiratory disease or cardiovascular disease than those without pneumonia.

Conclusions: LTPP was significantly related to a poor survival and death from respiratory disease. To improve the prognosis, not only nutritional support but also exercise and rehabilitation program may be required for patients who develop LTPP within two years after surgery.

We previously examined pneumonia shadow on chest computed tomography (CT) performed as oncological follow-up in elderly patients who received surgery and were diagnosed with early gastric cancer (submitted for publication). Surprisingly, pneumonia shadow was detected in approximately one fourth of the elderly patients by two years after surgery. To differentiate this entity from perioperative pneumonia, we called it “long-term postoperative pneumonia (LTPP)”. CT detected “LTPP”, in patients who had not shown any active symptoms of pneumonia. Thus, LTPP is a silent shadow of past pneumonia including community-acquired pneumonia after gastrectomy, possibly related to poor daily activity, muscle depletion, reflux, and aspiration. Given the above, we suspected that such elderly patients might be at a high risk of other causes of death, including pneumonia.

To clarify whether or not LTPP occurring within two years after surgery determines the later prognosis in elderly patients, we conducted a follow-up study using the cohort we examined in the previous study (submitted for publication).

Patients were selected from the clinical database of consecutive patients who underwent gastrectomy for gastric cancer at National Cancer Center Hospital from January 2005 to December 2012, based on the following criteria: (1) a pathological diagnosis of T1, (2) age ≥75 years old, (3) R0 resection achieved, and (4) chest CT performed before surgery and within two years after surgery. Those who were censored within two years after surgery were excluded.

Surgery was basically determined by the Japanese Gastric Cancer Treatment Guideline version 2 or version 3 depending on the date of the surgery [7,8]. In short, gastrectomy of D1 or D1+ dissection was performed for early cancer without adjuvant chemotherapy. The surgical procedure and extent of lymphadenectomy were determined by the oncological tumor characteristics, regardless of the patient's age. The postoperative follow-up was as follows: disease recurrence for stage I tumors was evaluated routinely every six months during the first year and every year thereafter for the next four years. The oncological follow-up included physical examinations, blood tests, and CT or ultrasonography. Basically, chest to abdominal CT was performed routinely every year for at least five years after surgery for oncological follow-up. When recurrence was suspected, additional imaging studies were performed.

LTPP was diagnosed based on chest CT performed every year until two years after surgery. According to the guidelines for diagnostic imaging of adult community-acquired pneumonia 2007, diagnostic findings of pneumonia on CT were classified into three types (Figure 1): consolidation type, reticular type and nodular type [9]. Those presenting two or more types at the same time were called as mixed types. The diagnosis of LTPP was defined as the new presence of these findings on chest CT compared to CT performed before surgery.

In this study, the overall survival (OS) was defined as the period from two years after surgery until the date of the final observation or death. The OS curves were calculated based on the Kaplan-Meier curves and were compared by the log-rank test. The data for patients who did not experience an event by the date of the final observation were treated as censored cases.

Definition of diagnosis of pneumonia based on computed tomography. a. consolidation type, b. reticular type, c. nodular type

♱: Number and percentage of patients in each category in each group (except age, BMI, GNRI, %VC and FEV1%)

Univariate and multivariate Cox proportional hazards regression models were used to analyze the hazard ratios (HRs) for the OS. P values <0.05 were considered to indicate statistical significance. The cumulative incidence rate of death of respiratory diseases and that of cardiovascular diseases between the two groups was compared by Gray's test.

Among the 3412 patients who underwent gastrectomy for gastric cancer at National Cancer Center Hospital between 2005 and 2012, 169 had been examined in our previous study (submitted for publication). Figure 2 shows the consort diagram of the present study. Ten cases were censored within two years after surgery and five of them died of other diseases. Thus, a total of 159 patients were included in the present study. LTPP was found in 40 patients (25.2%) by chest CT: consolidation type (n=14), reticular type (n=9), nodular type (n=14), and mixed type (n=3). The agreement rate in the diagnosis of LTPP was 96% in two surgeons.

Flow diagram of the present study 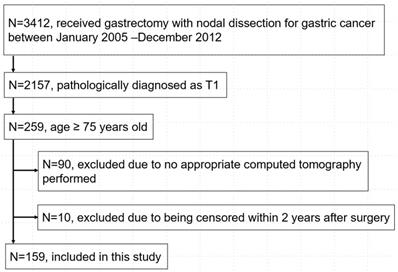 Table 1 summarizes the clinicopathological characteristics of the patients. All patients were diagnosed as pathological Stage I. Compared with the patients who did not develop LTPP, the proportion of men was significantly higher in those who had LTPP (p=0.025). Other background characteristics including surgical procedure, preoperative respiratory functions, and postoperative complications were similar between the groups. Seventy-two patients had a pneumonia shadow before surgery. Among them, 22 developed LTPP at another location of the lung within 2 years after surgery. 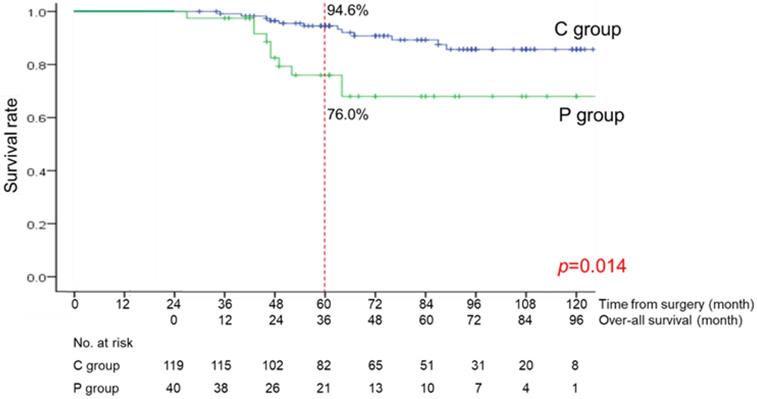 ♱: The number and percentage of patients in each category in each group

♱: The number and percentage of patients in each category in each group 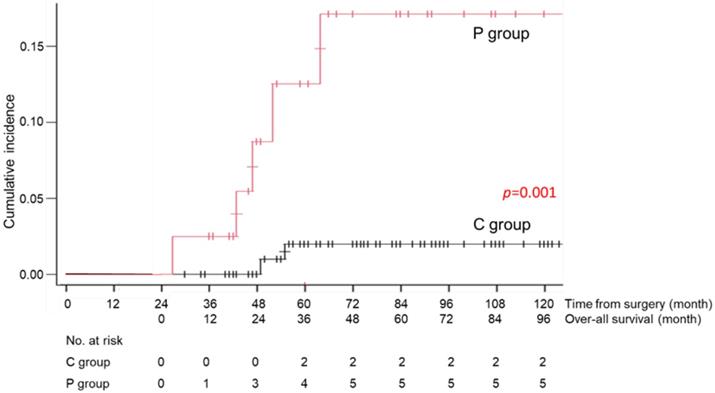 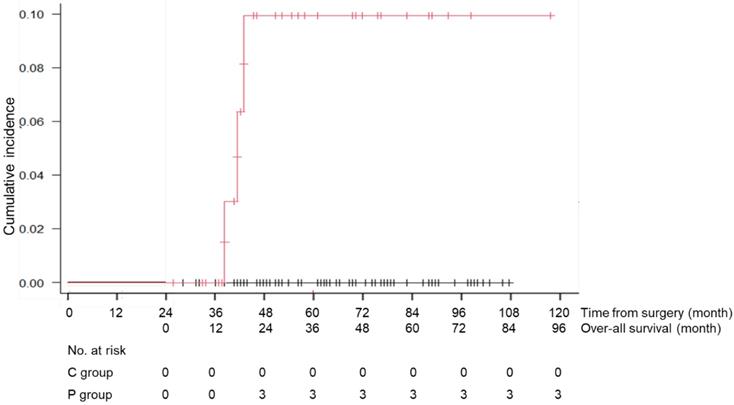 We confirmed that approximately one in four elderly patients was diagnosed with LTPP after gastrectomy, that showed much higher incidence in comparison to general elderly people. We demonstrated for the first time that elderly patients who developed LTPP had a worse prognosis than those who did not. Furthermore, comorbidities and LTPP were significant independent risk factors for a poor prognosis. Previous studies have shown that the Charlson comorbidity score was significantly related to a poor prognosis, which was concordant with the present findings [11,12]. We found some previous reports that focused on the perioperative pneumonia following gastrectomy as a risk factor for a poor prognosis [13-15]. However, there have been no reports concerning the prognostic effect of LTPP.

Interestingly, death due to cardiovascular disease was also increased in the patients who developed LTPP. It is well known finding that chronic obstructive pulmonary disease induces cardiac failure so called pulmonary heart. In this study, however, LTPP was not related with preoperative respiratory function. On the other hand, previous reports showed that cardiovascular events are frequent in community-acquired pneumonia, and their occurrence adversely affects outcome [19,20]. The mechanism remains to be fully established, but it has been suggested that the inflammatory state in patients affected by community-acquired pneumonia acts to promote platelet activation and thrombosis, and to narrow coronary arteries through vasoconstriction [20]. Thus, LTPP after gastrectomy would increase the cardiovascular death.

Several limitations associated with the present study warrant mention. First, this was a retrospective single-center study analyzing 159 elderly patients. However, few studies focusing on elderly patients have investigated the clinical importance of LTPP. Therefore, the accumulation of findings from retrospective studies would be meaningful. Our results should be further validated in a multicenter study with a large sample size. Second, preoperative health status, which could be associated with the development of LTPP, was not included in this study. Because the present study was a retrospective study, we retrieved the data from the medical records. However, the preoperative performance status (PS) was not clearly described or missing in many cases. Third, postoperative frailty could be related with LTPP. To evaluate the frailty before developing LTPP, patients have to receive measurement of the muscle strength or volume several times until 1 year after surgery. To do such evaluation for stage I, prospective interventional study is necessary. Therefore, we could not examine the frailty after surgery in this retrospective study. Fourth, the prognosis of patients with LTPP may have been overestimated because our hospital specializes in oncology and often performs surgery for patients with few comorbidities. In the community hospital setting, where surgeons operate on elderly patients with severe comorbidities, patients might have a poorer prognosis.

In conclusion, LTPP within two years after surgery was significantly related to a poor survival and death due to respiratory disease in elderly patients with stage I gastric cancer. To improve the prognosis, not only nutritional support but also exercise and rehabilitation program, such as one involving respiratory rehabilitation, oral care, and swallowing rehabilitation, may be required for especially male patients, who have high risk for LTPP.

All study participants provided informed consent, and the study design was approved by an ethics review board.