Impact of mismatch repair or microsatellite status on the prognosis and efficacy to chemotherapy in metastatic colorectal cancer patients: A bi-institutional, propensity score-matched study

Background: Deficient mismatch repair (dMMR) or the microsatellite instability (MSI) phenotype occupied approximately 15-18% of CRC patients. Previous studies showed that dMMR/MSI status is a favorable prognostic factor for stage II/III CRC patients. For metastatic colorectal cancer (mCRC) patients, only 5% of patients have the dMMR/MSI-H phenotype. The relationship between dMMR/MSI, chemosensitivity and survival in mCRC patients of real-world is still not clear.

Conclusion: The dMMR/MSI-H is not a prognostic factor for mCRC patients but is correlated with shorter PFS to first-line palliative chemotherapy.

Colorectal cancer (CRC) is the one of most common cancer in the world [1]. Loss of function of DNA mismatch repair (MMR) is an important mechanism of CRC development [2]. Mutation or modification of MMR genes result in MMR protein deficient (dMMR) and microsatellite instability (MSI). It has been reported that the dMMR or MSI high (MSI-H) phenotype is present in approximately 15-18% of CRC patients [3]. Most dMMR/MSI-H tumors are sporadic CRC, and only approximately 3% of dMMR/MSI-H tumors are Lynch syndrome (LS) or hereditary nonpolyposis colorectal carcinoma (HNPCC) [4, 5].

The dMMR/MSI-H status was reported to be a predictive marker for adjuvant chemotherapy. Multiple retrospective studies showed that dMMR/MSI-H is correlated with a favorable prognosis in stage II/III CRC [6-11]. Previous studies suggested that dMMR/MSI status may be a predictive marker of decreased benefit form adjuvant monotherapy of 5-fluorouracil (5-FU) in patients with stage II disease, but not in those with stage III disease [7, 8, 12-16]. For metastatic colorectal cancer (mCRC), the relationship of the MMR/MSI phenotype and prognosis is unclear [17]. Ben et al. found that CRC patients with the dMMR/MSI-H phenotype have a worse prognosis [18]. Venderbosch et al. confirmed this result, but they suggested that the poor prognosis of dMMR appears to be driven by BRAF mutation status [19]. However, studies by Goldstein and FUJIYOSHI et al. found that dMMR/MSI-H status has no correlation with prognosis [20, 21]. For mCRC, only 5% of patients had the dMMR/MSI-H phenotype. One meta-analysis included studies showed that the effect of chemotherapy in mCRC patients with MSI status was similar to that of patients with MSS status [22]. Another meta-analysis suggested that MSI-H status was beneficial to disease-free survival (DFS) of mCRC patients, whereas it was not beneficial to overall survival (OS)[23]. Recently, KEYNOTE-177 published the results dMMR/MSI-H mCRC patients received pembrolizumab or chemotherapy. The results showed the ORR of dMMR/MSI-H mCRC patients received chemotherapy was 33.1%, and the progression-free survival (PFS) was 8.2 months [24]. Therefore, the aim of this study was to clarify in the real-world the PFS of dMMR/MSI-H mCRC patients who received first-line palliative chemotherapy.

This study enrolled patients with mCRC who were diagnosed and received treatment in two Chinese centers, Sun Yat-sen University Cancer Center and the Second Affiliated Hospital of Kunming Medical University, between June 2010 and August 2019. The inclusion criteria were histologically proven mCRC with clear MMR or MSI status, and the exclusion criteria were incomplete clinicopathological or treatment information. The study was approved by the Institutional Research Ethics Committee of Sun Yat-sen University Cancer Center, and due to the retrospective nature of the study, consent from individual patients was not required.

Most of the data used in this study were extracted from the Bigdata Alliance for Colorectal Cancer (BACC) platform (YiduCloud Technology Ltd., Beijing, China) and were checked by the researchers. The BACC platform is a big-data intelligence platform that integrates multisource heterogeneous electronic health-records data from hospitals all over China. We collected the following data from mCRC patients via the platform: demographic and epidemiological information (age, gender, smoking, family history, etc.), date of diagnosis, histopathological grading, primary tumor site, synchronous metastasis or metachronous metastasis, metastatic site, RAS/BRAF status, MMR/MSI status, chemotherapy regimens, best overall response to chemotherapy, start time and progressive time of chemotherapy, and last follow-up time or date of death. We excluded patients who had incomplete clinicopathological; who had missing or invalid information about their efficacy or PFS of first-line palliative chemotherapy. For first-line palliative chemotherapy, the censored time of follow-up was 36 months. For second-line palliative chemotherapy, the censored time of follow-up was 24 months. Local treatment including resection, radiotherapy and interventional therapy of the metastasis.

MMR status was detected by immunohistochemistry, and dMMR was defined as the loss of one or more of the following proteins: MLH1, MSH2, MSH6, or PMS2. MSI status was detected by PCR molecular detection or next-generation sequencing (NGS), and MSI-H was defined as instability in two or more of the gene loci (or > 30%), MSI-L as instability in only one gene locus (or < 30%) and MSS as no gene locus instability. In this study, MSI-L was grouped with MSS.

All statistical analyses were performed using R version 3.6.3 (http://www.r-project.org). The characteristics of patients were compared and evaluated by the Chi-square test.

Propensity scores were calculated in R Studio version 3.6.3 using a multivariable logistic regression model. The model included the following variables: age, CRC family history, metachronous or synchronous metastasis, primary tumor site, pathological differentiation and local treatment. The gene status of NRAS, KRAS and BRAF were not included in the model because they were unknown in more than half of the patients. In the PSM analysis, patients in the dMMR/MSI-H group were matched at a 1:4 ratios with those in the pMMR/MSS group. After assuring the comparability of the groups, treatment outcomes of first-line and second-line chemotherapy were compared between the dMMR/MSI-H and pMMR/MSS groups. The Kaplan-Meier method was used to estimate PFS and OS, and the log-rank test was used to compare PFS and OS. A two-sided p value and p value for the interaction of less than 0.05 was considered to indicate statistical significance.

a One patient used FOLFOXIRI only twice, then stop using oxaliplatin. 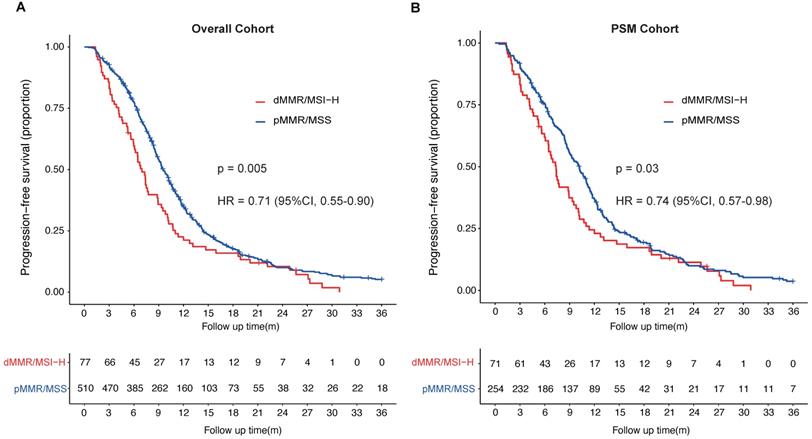 The univariate and multivariate analysis of overall cohort

*Because of missing value (>30%) KRAS, NRAS and BRAF were not included in the final multivariable model.

The univariate and multivariate analysis of PSM cohort 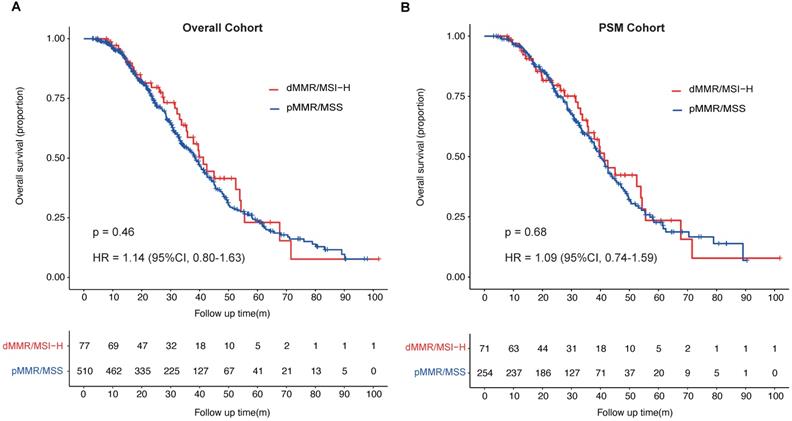 Comparison of Cetuximab versus Bevacizumab in the dMMR/MSI-H population

Our retrospective study presents a retrospective cohort of dMMR/MSI-H mCRC patients from two Chinese hospitals, with the purpose of exploring tumor prognosis and evaluating its sensitivity to chemotherapy and target therapy in real-world. We compared the clinicopathological characteristics of 77 dMMR/MSI-H mCRC patients with 510 pMMR/MSS mCRC patients who received systematic palliative treatment contemporaneously. According to our analysis, patients with dMMR/MSI-H mCRC tended to have higher rate of younger age, a positive family history, metachronous metastasis, right-side primary tumor, and poorly histology. These characteristics were consistent with previously published studies [18, 25-27].

In our study, median PFS of dMMR/MSI-H mCRC patients treated with first-line chemotherapy was 7.0 months in overall cohort and 7.4 in PSM cohort, which was similar to that observed in other studies but significantly shorter than that of pMMR/MSS patients in overall cohort (HR = 0.71; 95%CI, 0.55-0.90) or PSM cohort (HR = 0.74; 95%CI, 0.57-0.98). The median OS (38.6 months in overall cohort and 41.3 in PSM cohort) of dMMR/MSI-H mCRC patients was longer than that observed in other studies. Noticing that the OS of patients with pMMR/MSS tumor in our studies was also longer than that in similar studies, we suggested the long survival time might be caused by the high proportion (over 35%) of patients received local treatment in our centers. Patients with dMMR/MSI-H phenotype had shorter first-line PFS and longer OS than that with pMMR/MSS phenotype, which might be caused by the option of immunotherapy in subsequent treatment. Considering that the median OS of dMMR/MSI-H mCRC patients was similar to that of pMMR/MSS patients, our results and those from a recent large study contrast with those from some smaller studies on dMMR/MSI-H mCRC, suggesting that MMR status is not a prognostic factor for mCRC patients [20, 28, 29].

Few studies have compared the sensitivity of target therapy for dMMR/MSI mCRC with that of target therapy for pMMR/MSS mCRC. Seung Tae Kim reported that when treated with cetuximab-containing or bevacizumab-containing chemotherapy, there was no significant difference between the MSI-H and MSS mCRC groups in treatment efficacy in either RR, DCR or PFS [37, 38]. Kay Pogue-Geile [39] found from a post-hoc analysis of the NSABP C-08 study that patients diagnosed with dMMR colon cancer derived a significant survival benefit from bevacizumab in comparison to patients with a pMMR tumor. In our study, dMMR/MSI-H and pMMR/MSS mCRC patients showed similar RR and DCR in response to first-line cetuximab- or bevacizumab-based chemotherapy. However, PFS of pMMR/MSS patients was significantly longer than that of MSI-H patients. While the differences in treatment efficacy of different target therapies for dMMR/MSI-H tumor have been examined, there is no clear consensus to date. Yue Yu [40] reported that, compared with a chemotherapy-alone group, the bevacizumab treatment group achieved significantly longer PFS and a tendency to exhibit a higher ORR, whereas the cetuximab combined group did not. A post-hoc analysis of the CALGB/SWOG 80405 study also suggested that bevacizumab-containing chemotherapy conferred a survival advantage over cetuximab-containing chemotherapy [41]. However, another later published study of a large cohort of non-selective dMMR patients [36] found there was no significant difference in OS between the anti-VEGF-containing and anti-EGFR-containing treatment groups. We found that the use of bevacizumab could result in a significantly higher ORR for dMMR/MSI-H mCRC patients, whereas cetuximab could not, but there were no differences in PFS and OS between the chemotherapy-alone group and the combined target therapy group.

The main limitation of our study is its retrospective design, which may to some degree influence its external validity. Moreover, because of the low incidence, the number of dMMR/MSI-H patients in the subgroup analysis was relatively small, which made it difficult to detect significant differences between the outcomes of different treatments among these patients.